Recently, Xiaomi announced a portable LED flashlight in a lipstick-size. It is capable of charging a small-size mobile device as well, though this not its main purpose. In some sense, we can say the manufacturer has removed the torch and came in with another interesting product via one of its sub-brands. The ZMI PowerBank Mini is another lipstick-shaped product that carries a 3000mAh capacity battery inside. So it won’t occupy more space but will be at your elbow when your phone’s battery drainages the whole power.

Generally, Xiaomi is the number 1 powerbank maker in the world. At least, it got this title in 2016. The company has designed a few new models in 2017 as well. So we tend to think it will the first in 2017 when the results are announced. As for now, it has released the second-gen powerbanks including the Xiaomi Mi PowerBank 2 and Xiaomi Mi PowerBank 2C. These are the main players in the niche, and we are not even talking about their various capacities and upgrades.

ZMI is known for a few good powerbanks as well. So the ZMI PowerBank Mini that also carries a model number of PB30 should provide a great performance besides a stylish look.

It comes in a simple carton packaging with a product appearance printed on the cover. This is unusual because small-size powerbanks mainly come with a transparent cover to display its actual view.

On the back, we can find some useful info and an anti-counterfeit label.

It has a cylindrical design looking like a lipstick. The shell is made of plastic. There is a printing referring to the product name and capacity.

The bottom side has a lanyard hole.

The top side, where two interfaces are located is covered with a dust-proof sticker.

Once it’s removed we can see a mini USB-A port for output, a micro USB input port, and a power button. The power key also has a LED flash to display the current state.

The power key supports double-click to activate the small current charging mode for small battery-size devices such as Bluetooth headsets and smartbands.

The power bank measures 10.1 cm only.

The tests held on the ZMI PowerBank Mini showed its output power is 1A, while the load voltage is close to 5V. Thus the information on the packaging as this product comes with a standard Lithium-ion 3000mAh battery (supplied by LG) is true, and it supports output power of 5V/1A (5W). Unfortunately, it doesn’t support fast charge.

Anyway, we continued increasing the load, so the output voltage began rapidly reducing and enabling the explosion protection mode. The response speed is very fast.

Finally, the ZMI PowerBank Mini was tested for an actual charging the Xiaomi Mi 6. It showcased a power of 4.91V1.0A.

To look inside, there isn’t another method rather than carving the plastic shell.

Its thickness is 2.65mm. This should protect the powerbank from minor damages. Once the body is removed, we can see the battery and all the ports and buttons collected on the PCB.

The battery itself has a thick rubber mat at the bottom that serves as a buffer.

The battery is soldered to the PCB via a nickel ribbon.

This is the USB-A output (female) port.

Those who have got acquainted with the Xiaomi Portable LED Flashlight should state the ZMI PowerBank Mini comes with the same features and look. Even the battery is the same. The synchronous rectification program is identical to the SY6918 as well. So we can say this is the case when the manufacturer kills two birds with one stone. Plus, both products cost too less. 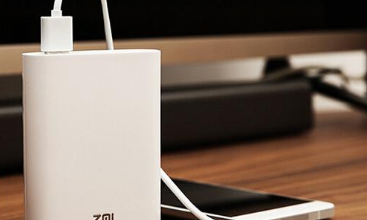