Z9S – is one of the flagships of the company ZIDOO, which has powerful components, excellent design, and functionality. The equipment is built on the updated Realtek 1296DD platform, copes with any type of multimedia and is suitable for 4K playback. Zidoo Z9S is a new multimedia smart box with support for 4K video, modern multi-channel audio formats, the most demanding 3D games, as well as wireless Internet access. Thanks to progressive hardware, user-friendly interface, and compatibility with a wide variety of peripheral devices, the multimedia console can satisfy users with any needs, acting as an optimal solution not only for home but also professional use.

ZIDOO Z9S is the Android TV-Box of which we present today its review, a new model of the ZIDOO brand aimed at the reproduction of high-level 4K HDR video. A Box that integrates the new SoC Realtek RTD1296DD that provides improvements over the previous RTD1255 that we have seen in several reviews as in the ZIDOO X10. On this occasion, we have an aluminum box with very good finishes, external antennas for the WIFI ac adapter and two external SATA connectors as well as other interesting capabilities. Let’s see in our analysis how this device behaves and what it offers regarding the competition.

And, as always, we start with the box of the console, which is made of three-layer cardboard. Zidoo with packaging did not bother, a minimum of paint, in the center is a sticker with a photo of the model of the console. As they say cheap and tasteful. The box has the following dimensions: 24.5x20x8cm. 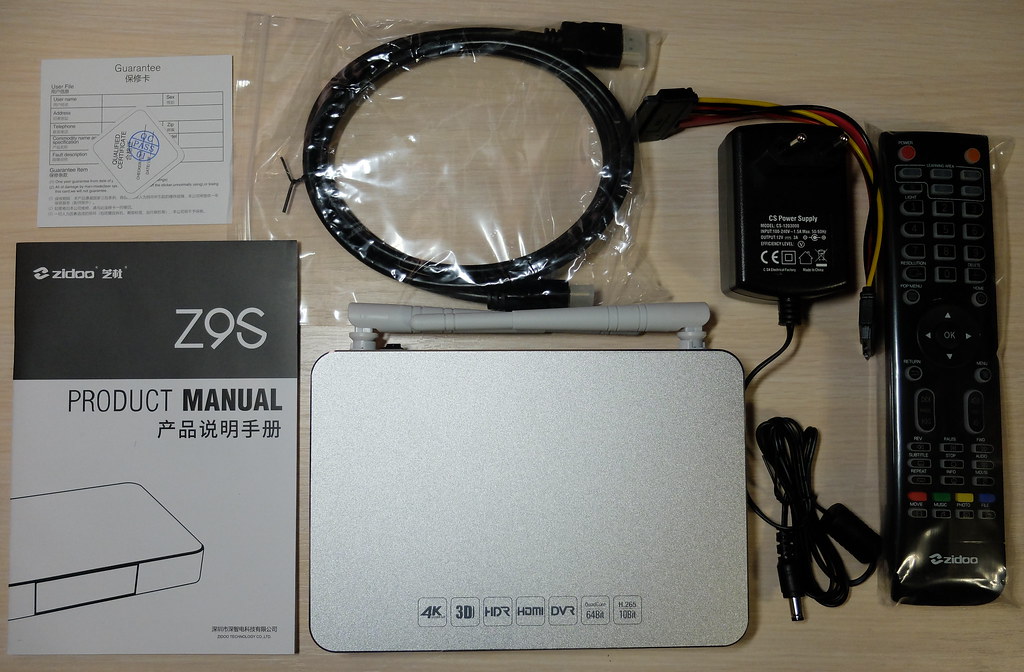 We open the box and the first thing that catches our eye is, of course, that the prefix itself is in a translucent sachet. We remove the upper part together with the TV box and under it we see the IR remote already familiar to us from the Zidoo x9s, the SATA cable, the HDMI cable, the device’s power supply unit, the instruction manual and the warranty card.

The power supply, with a European plug, provides 12 volts and 3 amperes to the console, in order to fully supply all connected HDD drives with energy, and the media player itself. Included is a single SATA cable, to simultaneously connect two HDD drives, you will have to purchase one more. HDMI cable one meter long is quite ordinary, but it is enough to stream any video supported by the console.

The remote in the Zidoo Z9S is from a more expensive previous version of the media player – the Zidoo Z9S and has a lot of function keys, as well as a backlight when controlling the console in the dark.

By default, the color buttons can be assigned to launch specific applications. In order not to be a malcontent, I commend the pilot for the function of learning IR commands and the ability to turn on the key backlight.

An alternative to the physical RCU is the Control Center web application that allows us to control Zidoo Z9S, we can also access files stored on the device. 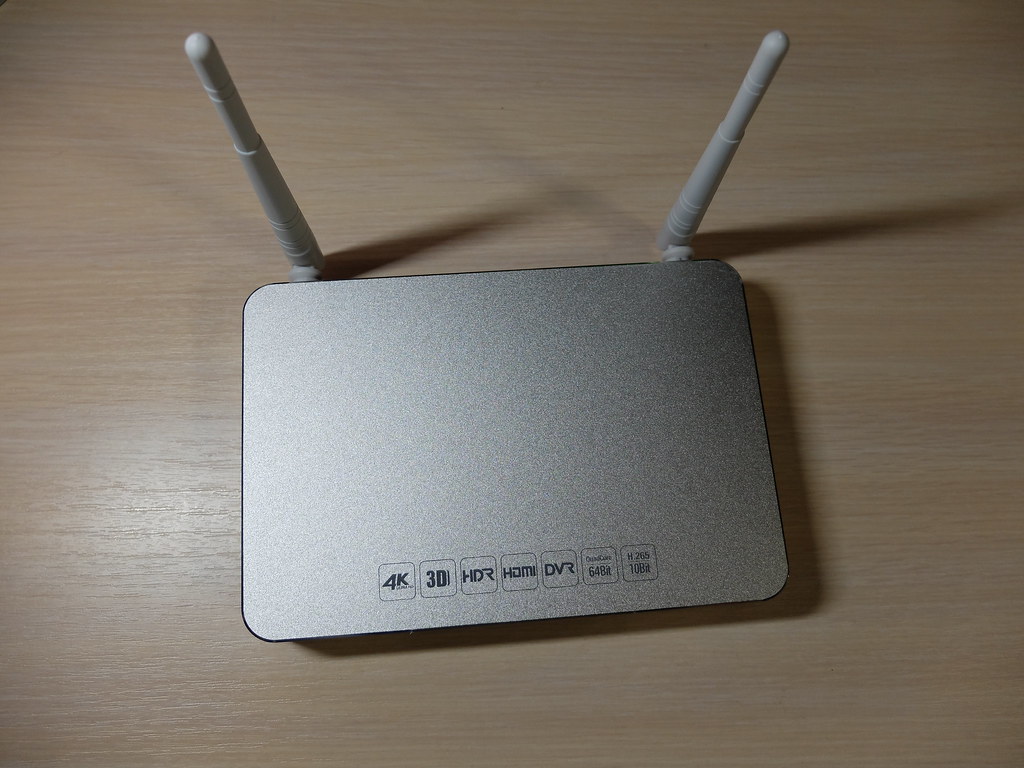 The Zidoo Z9S is made of aeronautical quality aluminum and on the front, we have an IR receiver and a display that gives us basic information about the connections or what we are playing. The box of this model is very similar to the previous Zidoo X9S, but this time the color is silver and has some connection, in the back we have two WIFI antennas. At the top side of the device, there are several logos.

The left side is decorated with two USB 2.0 ports and one SATA output for connecting HDD drives. These USB ports can be used to connect various gadgets and additional manipulators – mice, joysticks, air mouse, etc. 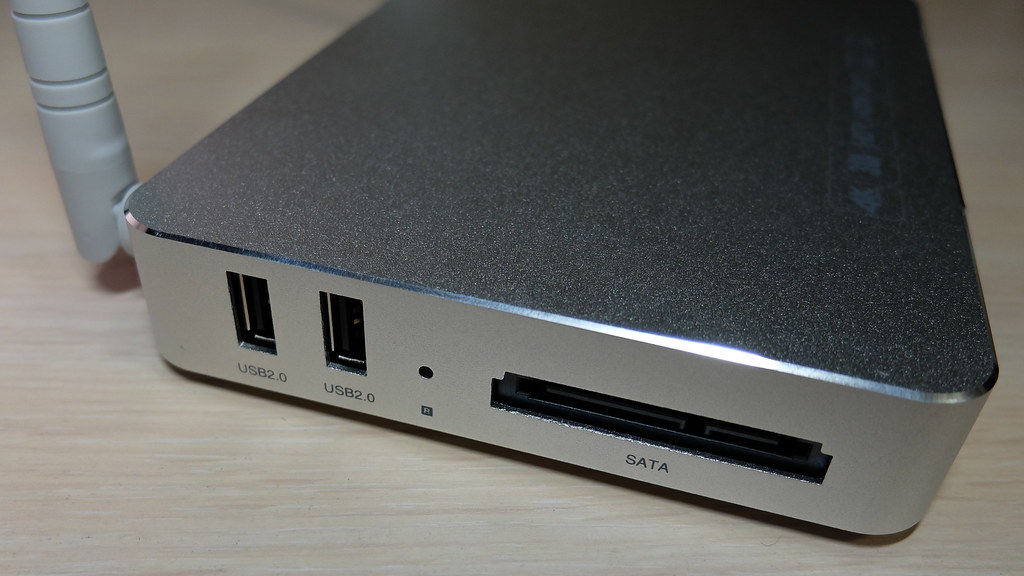 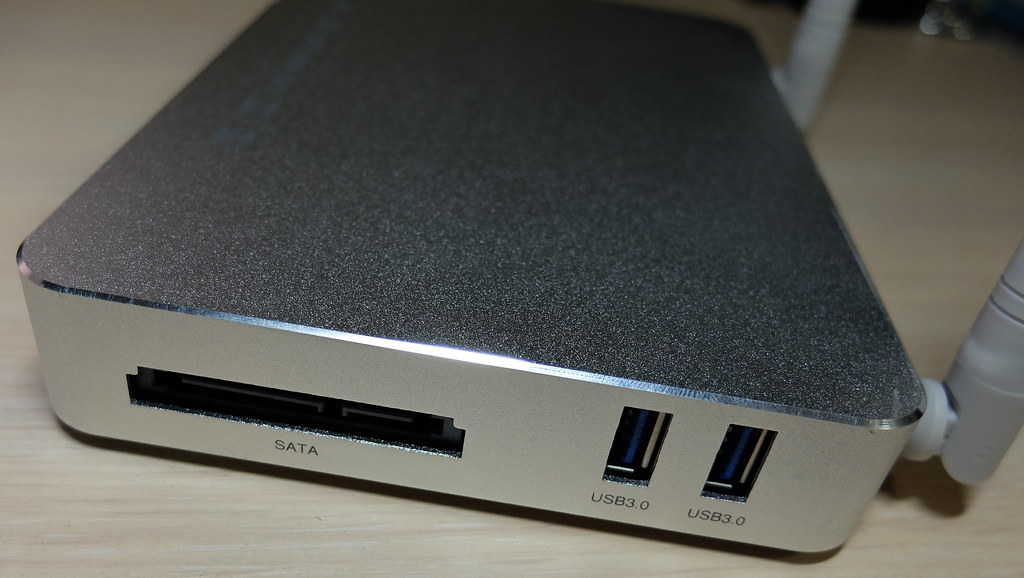 On the right side of the Zidoo Z9S Android Smart Media Player, there are two more USB ports, but already a shorter 3.0 format for transferring data at higher speeds, such as watching videos from a USB flash drive or an external USB hard drive, in UltraHD 4k resolution. Plus, another SATA port, which will be useful to those users who have several hard HDD drives.

The back panel is equipped with two fixed antennas, one of which is used for WIFI Internet connection, the second for Bluetooth devices. Also on the back are the rest, necessary for the device, ports. Button for the physical inclusion of a smart set-top box, a port for connecting the power supply. HDMI ports – one output and a second input, for recording broadcasts from other devices, both standard 2.0a. SPDIF optical audio output for transmitting multi-channel audio to home theater receivers. The AV output can be used to connect the Zidoo Z9S to older televisions that do not have an HDMI input. The RS232 port is unlikely to be used and its purpose is unclear. 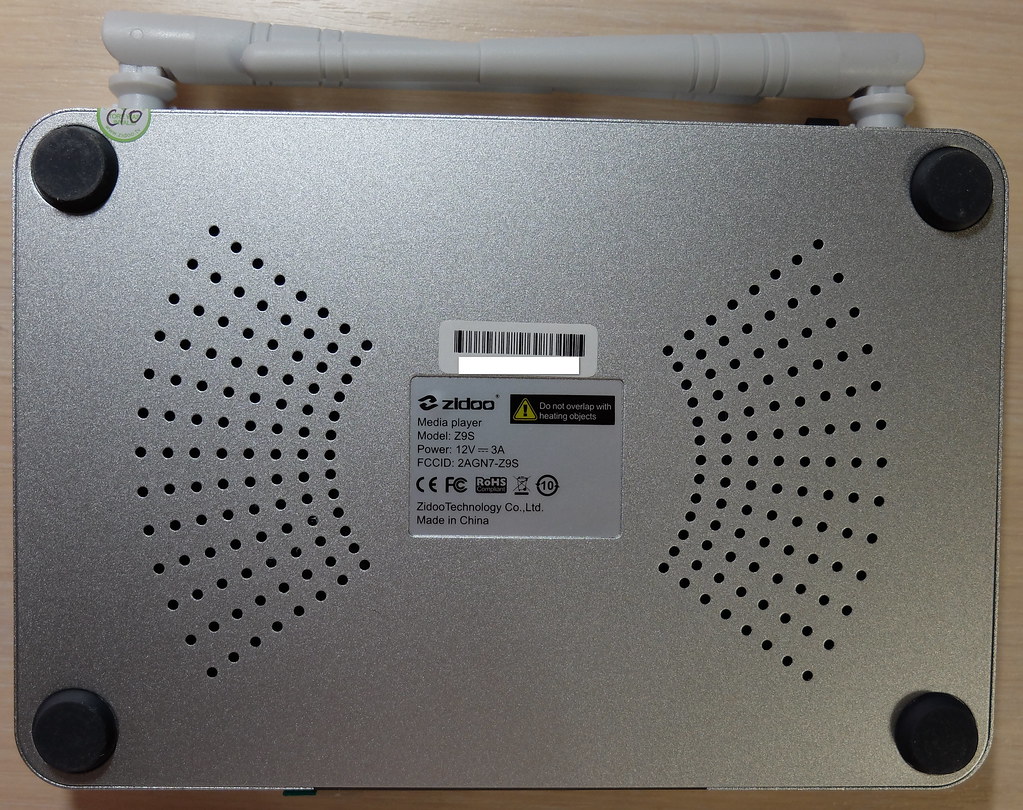 The bottom of the android console is also made of metal and has a lot of ventilation holes, for better cooling of the processor under high loads. The aluminum case in the Z9S acts not only as a decorative part but also has the function of distributing the heat generated from the work of the processor part. Together with ventilation at the bottom of the console, they provide excellent heat dissipation.

Zidoo Z9S has an operating system based on Android 7.1 with ZIUI user interface (Zidoo UI) and OpenWRT for NAS functionality. It is a less refined version in the graphic style than that appreciated on X20, the same functional but more dated. The multimedia features of the device are those, and even the options do not change. You can manage from the remote control included in the package (a programmable IR to manage the TV), from the smartphone in various ways, or from external instruments such as the Control 4 consoles through the RS232 port or the Logitech Harmony controllers. Furthermore, the box supports HDMI-CEC then responds to the TV remote control. The included one has the keys of the model seen on X20, but some keys have a different position and are built with cheaper plastics.

Fortunately also the multimedia reproduction capabilities, the formats supported, the frequencies of the automatic change of the refresh rate (23.976,59.94,25,30.50 Hz) are those of X20. Zidoo Z9S decodes 4K UHD 60 fps in 10-bit H.265 / HEVC, supports HDR / HDR10, does HDR SDR conversion, manages 4K Blu-Ray menus and allows complete subtitle customization. The Home Theather apps and Poster Wall are the centers of all the local video library’s catalyst: they download the covers, add the missing metadata, recognize the series – but even the powerful Media Center, a file manager for local and network content, is a bit suitable for all. Audio side, Z9S reproduces lossless formats such as FLAC and APE (but also SACD, DFF, DSF, WAV), brings the sampling rate of Android up to 192kHz in output, and communicates with ATMOS and DTX: X HD.

They are the same capabilities as X20, with fewer points in the overall stability of the system and the apps. ZDMC, to be installed by hand via apk, uses the Media Center player instead of his and has had some crashes in the test weeks (before, however, the latest firmware came out). It is convenient for add-on compatibility but can be avoided.

Furthermore, there is no official support for Google Play (the Zidoo forum has an apk for this too but do it only if you know the risks), and there are no licenses to play Netflix and Amazon Prime over 480p. These last aspects can be tolerated on a sector box like this; who buys it does not look for streaming reproduction but the quality of the local one, whether audio or video. And then, as explained several times in the videos, every TV that makes sense to combine these players already has a certified app available.

The recording from the HDMI In port is one more thing. On the one hand, at least at this moment, it is not reliable because it is still in a beta state; on the other hand, most of the time it works. Record TS or MP4 movies up to 1080p without fluctuating too much with the bitrate; supports programming, PiP, and UDP broadcast. Can save to external disk. In the trial release, it has a problem with the aspect ratio of the preview, but it can be useful to record gameplay from the console, to record computer screens, to record the output of a decoder or another player. I did tests with the Nintendo Switch, with an Apple TV on Netflix and with a MySky HD, connecting an HDMI split to overcome the HDCP 2.2 protection.

Zidoo Z9S is a less refined and less comfortable X20 when it comes to connecting more hard drives, but the same is versatile and powerful. It is a medium-high-end multimedia player for the Realtek SoC and the Zidoo software suite and is a recommended upgrade for those with a previous generation model like X9S. During the trial period, it had stability problems with third-party applications, but the last two updates have corrected several aspects and added convenient features such as recording from the HDMI port. I had no problems with Wi-Fi reception or with the automatic management of the Ethernet connection. 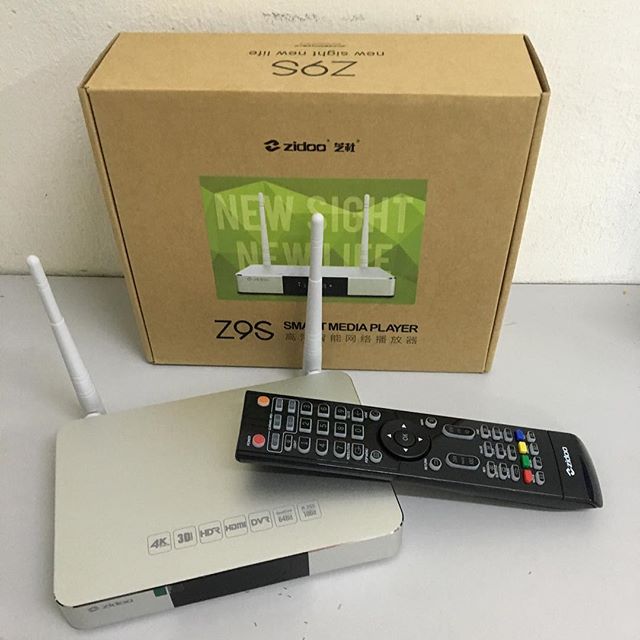 A user with my habits would have liked DRMs to reproduce streaming services at a higher quality if only to make it the center of everything. But it’s wrong to see it as an alternative to Chromecast or Fire TV Stick. We are on a different level, more difficult to appreciate, more satisfying to use. If you are interested, keep an eye on it for a few weeks; check the firmware updates on the zidoo.tv website and read the posts on the dedicated community. The Z10 variant is also available on the market, with space for hard drives, a fan, and a few more ports. 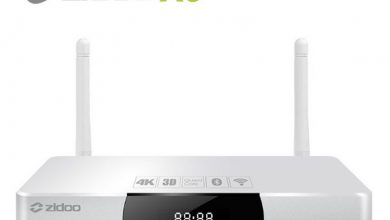