There’s no surprise that smartwatches can run for a week such as No.1 F18 or even for months like Mi Band series.  Meanwhile, there are some incredible smartwatches that have the CR2450 battery enabling them to run for a whole year. However, none can compete with the new Zeblaze VIBE 3 which has set a record for the:

The watch comes inside a nicely packaged white box, with the Zeblaze logo, the ‘VIBE 3’ name, selected color, and most importantly a sketch of how the watch looks like. The layout of the watch on the box provides a slight teaser for the user.

On the sides, we have the same sketch but with a different angle, and at one side the functions are illustrated.

After opening the box, the first impression of the watch is blocked by the user manual, which is the first thing to see after opening. Taking out the manual, we see the Zeblaze VIBE 3 resting in a transparent plastic cover.

At the bottom, we find a screwdriver which allows us to open the watch and insert a new battery when the old one ends. It comes with the following accessories:

That’s all. Though the accessories are limited but still the manufacturer is generous as it provides a screwdriver in the box.  In short, while opening the box, we get the teasers such as the watch design on the box and placing the user manual first, which hasten us to unbox and witness the first impression.

Design & Appearance
With the DLC process, VIBE 3 is the most robust sports smartwatch that we have ever tested

Starting the Zeblaze Vibe 3 review, similar to its predecessors, the Zeblaze VIBE 3 follows the design of a sports smartwatch, which is to look as much rugged as possible. The built of the watch is the best we have ever reviewed despite the stupendously low price tag. The chassis is made from 316L Stainless with a Diamond Carbon Coating making it immune to extreme temperatures, budges, and crashes, with no scratch at all.

Apart from this, it’s tightly sealed and is IP67 certified which means that it’s tri-proof (waterproof up to 1 meter, dustproof, and shockproof). However, this is where the confusion arises. The manufacturer says that it has IP67 certification but also claims that it is water resistant up to 50 meters. If the limit was 50 m rather than the standard 1 m for IP 67, it should have been IP68 certified. However, we did the watch’s waterproof test in a glass and guess what it survived. However, it’s okay to wear it while surfing but we won’t recommend it wearing while deep-water diving.

Zeblaze doesn’t overdo it and make the ruggedness of VIBE 3 to the minimum. We loved the decoration diamond screws on top which reflects its robustness. They would have looked much better if they were placed in perfect symmetry. However, nothing to complain under $25.

In comparison to the previous generation, the 3rd generation has a relatively 1.16x larger face which further exaggerates its beauty.

The bezels surrounding the screen are only 8mm thick that is why the Zeblaze calls this screen layout as a full-view display. To increase the durability of the screen, it has been coated with Corning Gorilla Glass 4.

Since the watch is larger than its ancestors, it definitely has more weight and area. To be specific, it is slightly heavy weighing around 78 grams which is half the weight of a standard 5.5-inch smartphone. It occupies a space of 26.00 x 5.00 x 1.48 cm. Indeed, the watch will look slightly larger on a small wrist, but isn’t that how rugged sports watches should look like?

As far as the color availability is concerned, the watch comes in three colors: Black, Blue, and Wine Red.

On the sides, we have the four buttons made from metal and presses effortless. There’s text written on the bezel, near each button. Sadly, the text might confuse the user a little bit as it was written just to reflect a sports watch design, not a smartwatch one. Everyone loves the physical watch Each button has multiple functions as the screen isn’t touched which are as follow:

Moving to the strap, we have a removable 26mm TPU strap which is anti-allergic, anti-corrosive, and stretch-proof. There’s also a visible rugged diamond pattern as well on the strap.

In short, VIBE 3 is larger, much elegant, way robust than the previous generations. The design is somewhat an intermediate between ruggedness and classic sports watch layout.

Another interesting aspect in the Zeblaze Vibe 3 review is the screen and display of the watch. Like previously told, the bezels of the watch are reduced to the only 8mm and with a larger size, it’s a Full view display. On the front, is the 1.24-inch screen. The best part is that it has a retro display with the FSTN technology which has the best visibility under bright sunlight.

However, it also has a disadvantage. At night or low light, the FSTN display won’t be visible. To counter this problem, the luminous feature has been added which glows the screen. The luminous screen is only active for 2 seconds only after each button press to save battery.

You won’t find a Snapdragon 845 under the hood of this watch for $25. Jokes aside, this watch is meant to be super power-efficient. That is why we find SI-BW03 chipset, which no not that much famous, as the heart of the flagship. It is accompanied by the Bluetooth 4.0 module. There RAM and ROM aren’t specified. We bet it they would be around 12KB each since there’s no OS or UI of the watch. Apart from these, for the pedometer to work accurate, there’s a G-sensor integrated as well.

Also Read: Zeblaze THOR 4: The ideal Smartwatch Phone for the most demanding users

It doesn’t display text but an icon for notification. 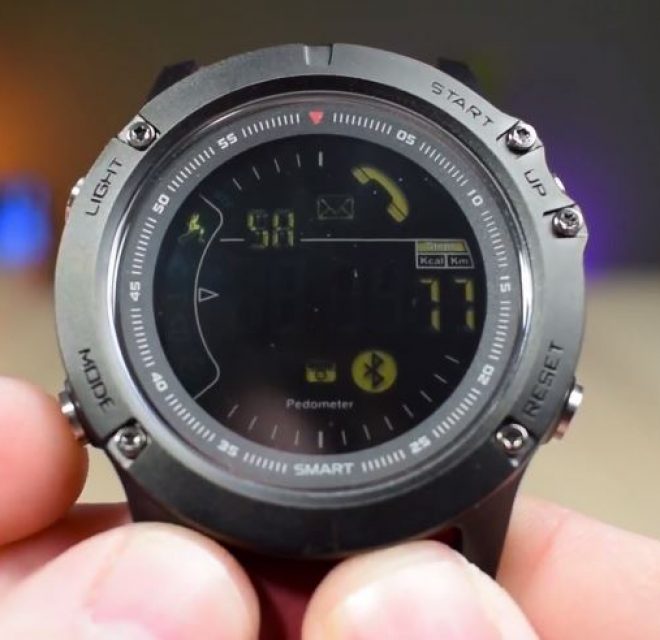 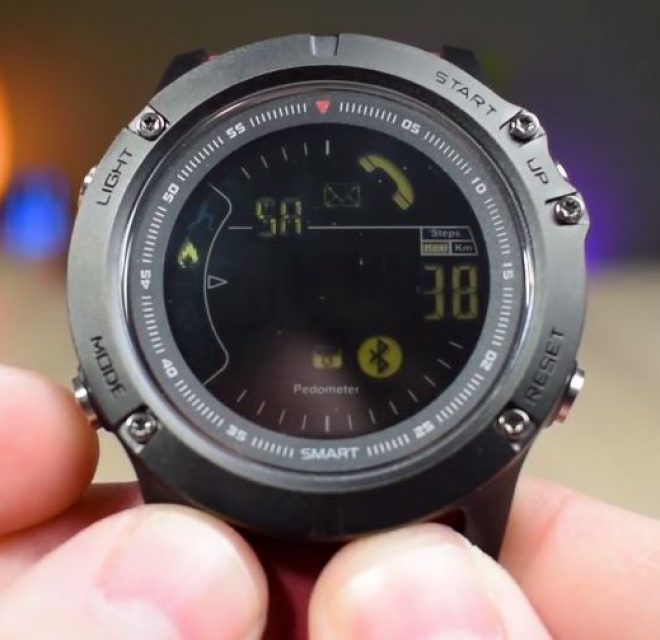 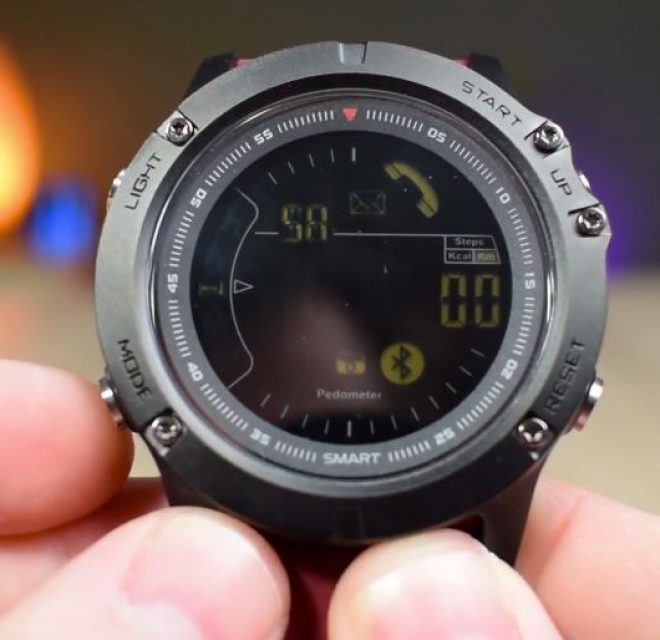 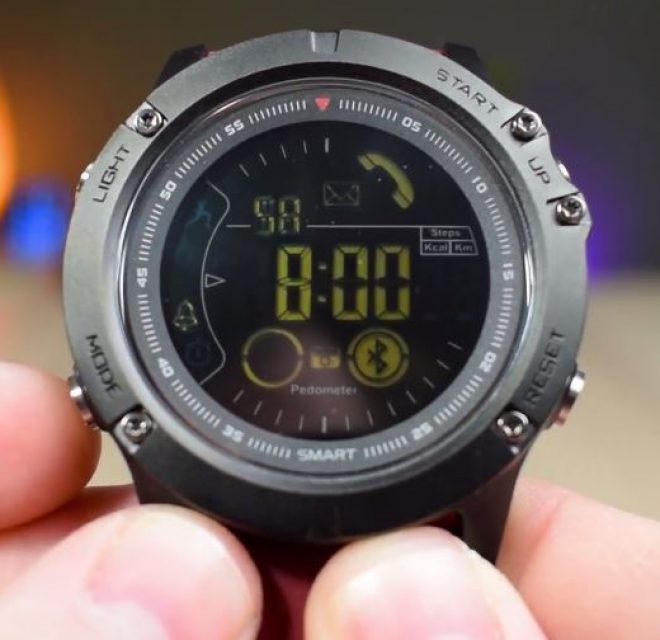 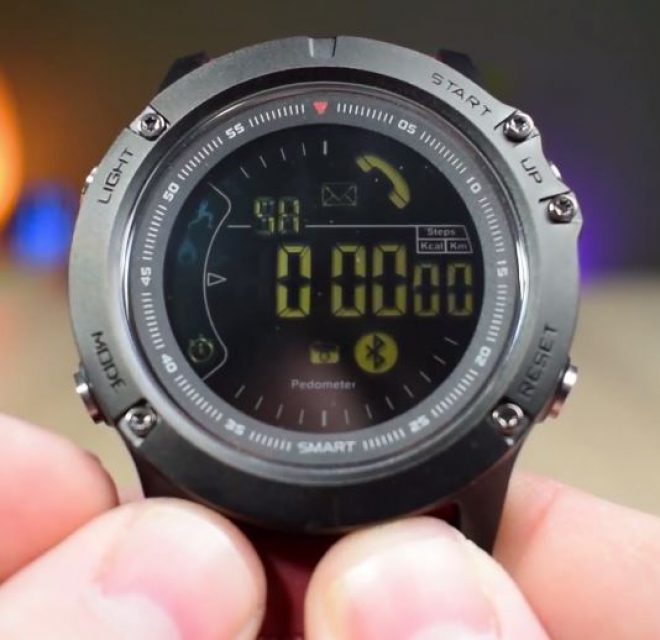 Though there are only few health wear features and HR sensor is missing as well, still, it’s worth under $25 because of other numerous features in this watch. Moreover, Zeblaze VIBE 3 records all-day activity monitoring your movements 24 hours and storing and synchronizing day of each day for the rest 33 months. Sounds practical and easy, right?

Like previously told, VIBE 3 (Bluetooth name XWatch) connects via Bluetooth 4.0 to your smartphone via the app called ‘Sports+’. It’s available on both platform Android (separate versions for China and Global) and iOS. One can scan the QR code in the user manual to download the app. We wished that the Bluetooth would have been somewhat better with the V4.1 or V4.2, for better transmission. However, this version works fine as well. There have been a few improper disconnects but that’s because of the stability problem with the app.

Unfortunately, like most of the Chinese smartwatches apps, Sport+ app is different. We have frequent questionable disconnects, some bugs and crashes with a few smartphones. To be honest, it depends on the luck of the user. When it works, it works like magic, and when it stops, it’s irritating. On iOS it’s pretty stable and smooth (few crashes), however, on Android, there are numerous crashes and disconnects on a few smartphones. 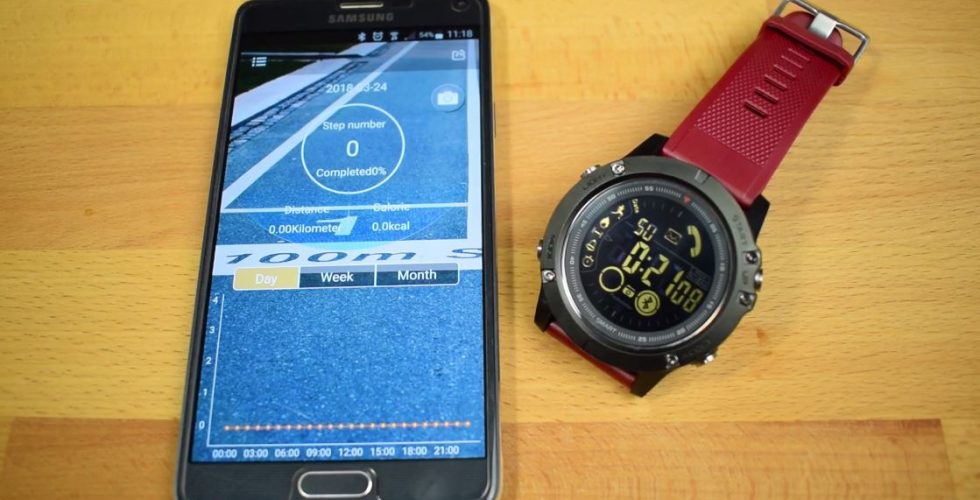 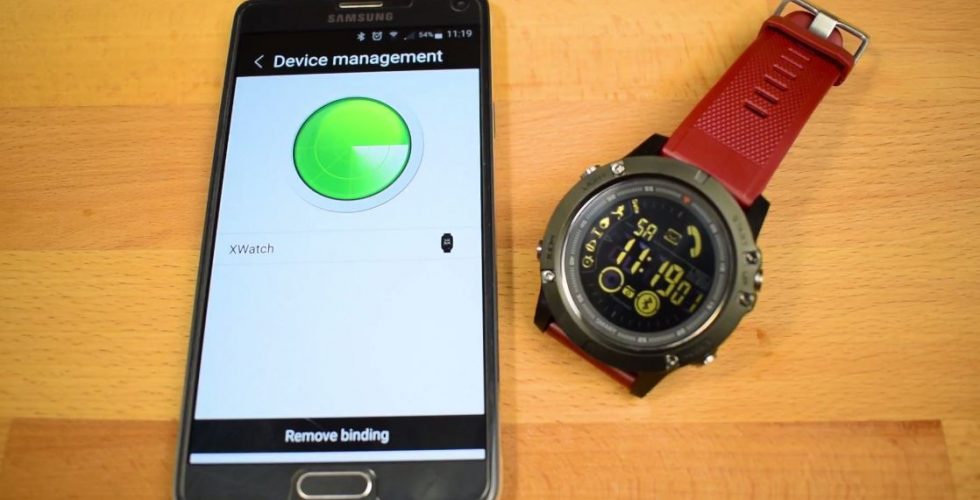 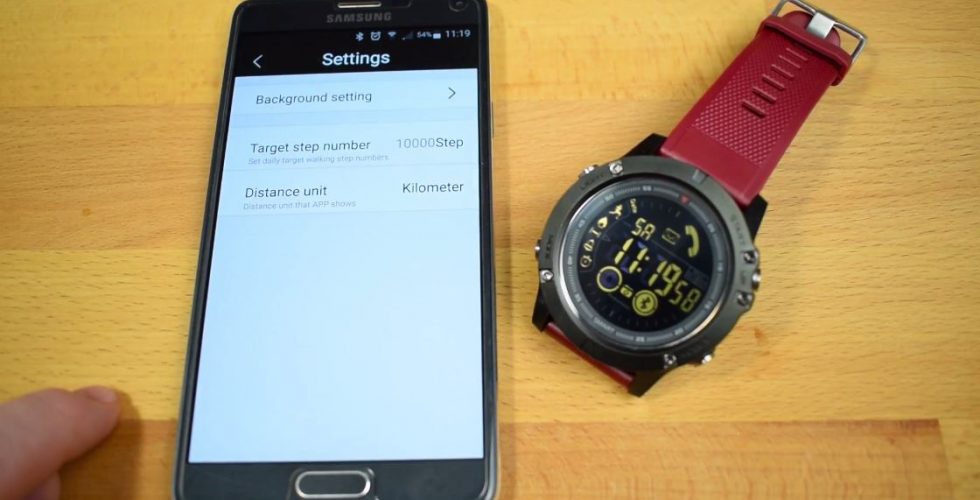 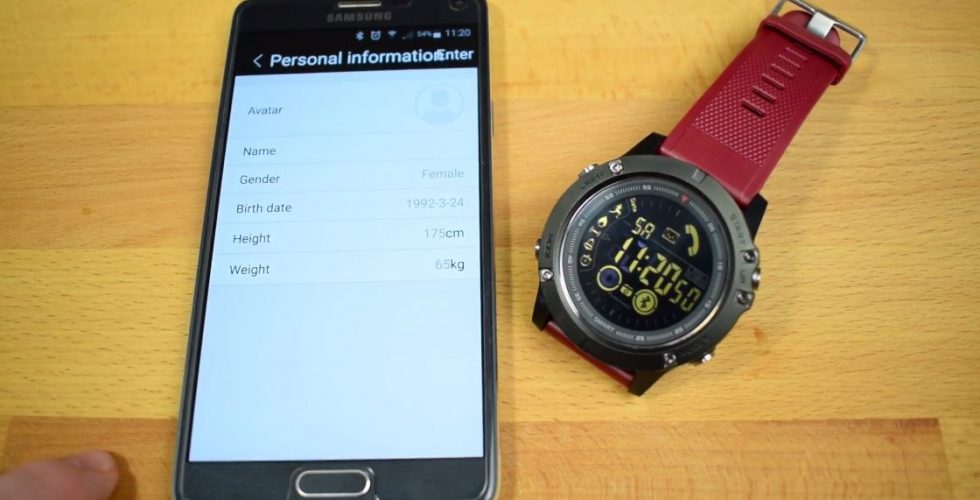 However, the UI of the app is excellent once it starts. You can set your profile with your personal information. It allows social share as well to share the report with your friends and family. Most importantly, the app is multi-language supporting Arabic, English, French, German, Italian, Japanese, Portuguese, Russian, Simplified Chinese, and Spanish.

Now come to the greatest highlight of Zeblaze VIBE 3 review, which is its battery. Under the hood,  610mAh CR2450 Button battery. It’s almost twice the capacity of the previous generation. Indeed, the manufacturer takes the full advantage of the increased size of the watch than VIBE 1 and 2. With the average usage, the watch can for almost 33 months which are around 990 days. More the use, lesser the battery life but not lesser than 900 days. Obviously, we can’t test it for 990 days. However, 10 since turning on, it still shows a full battery status. So, we can bet on the manufacturer’s claim.

Concluding the Zeblaze VIBE 3 review, for the person in search of a sturdy sports smartwatch with no trouble charging it again and again, love the retro FSTN display, and can manage with a few health wear features, Zeblaze VIBE 3 is the best bet under $25. Nothing can stand it’s carbon coated durable body, and 33 months standby timing.

If you are interested in buying Zeblaze VIBE 3, you can grab one for a discounted price of 23.99 USD/21.02 euros on Gearbest. It’s available in three colors to select: Black, Blue, Wine Red. Here’s the link to the store:

Xiaomi Coins: The new launch of the LuckyMe sub-brand 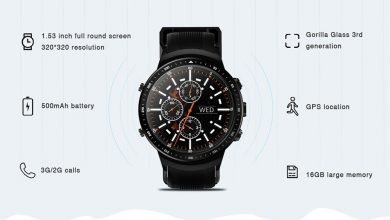 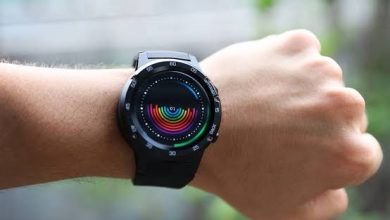 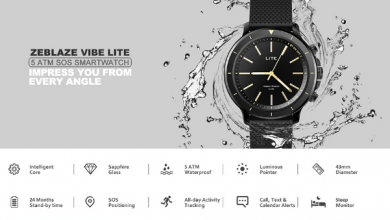