When it comes to the budget friendly smartphones, Xiaomi is surely the best. The company has launched some really good quality smartphones with superb specifications at an unbelievable price. The Xiaomi Redmi 4A is yet another budget smartphone from Xiaomi that was launched initially with 2GB RAM and 16GB ROM in India and was widely appreciated by the fans. But now, the company has announced a 3GB RAM and 32GB ROM model of the phone at just Rs.1000 more than what you pay for the 2GB RAM model which is superb. 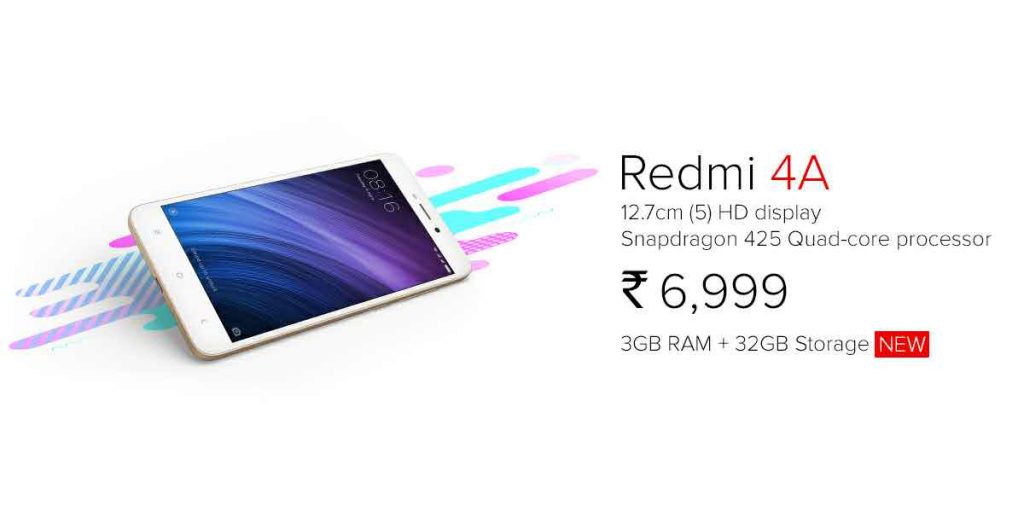 Ok, so if you are confused whether there are some more improvements, then there aren’t. Only the RAM and ROM are changed in the 3+32GB model and rest of the features, as well as the design, remain the same.There is a 5-inch 720p HD Display, a Snapdragon 425 Processor with the Adreno 308 GPU. Under the hood, the phone has a big 3,120mAh battery and runs on Android Marshmallow with MiUI 8. On the rear, there is a 13MP camera with LED flash whereas there is a 5MP front camera.

The info about the 3GB RAM and 32GB ROM model of the Xiaomi Redmi 4A was revealed on Twitter by Managing Director and Vice President of Xiaomi India, Manu Jain, saying – “Surprise! We are launching a new variant of Redmi 4A (3GB RAM + 32 GB flash memory) at an amazing price of INR 6,999.”. The phone will be available via Flipkart, Amazon, Paytm and TataCliq and Mi Home.

So, isn’t this a great news that you can now get the Xiaomi Redmi 4A with more RAM and ROM at a dirt cheap price?  Do let us know what do you think via the comments section.