At the end of May this year, Xiaomi held a new product launch conference and announced the company’s 8th-anniversary smartphone dubbed as the Xiaomi Mi 8. There were a couple of other models from this line, namely the Xiaomi Mi 8 SE and Xiaomi Mi 8 Explorer Edition. Though all three models were astonishing in their type, none of them reflected the manufacturer’s face. Say, the Mi 8 SE lacks many trendy features and due to the Snapdragon 710 chip is called the pseudo-flagship model. The Xiaomi Mi 8 Explorer Edition comes with tons of innovations, but it costs a fortune. As for the original Mi 8, it sports many mainstream features but it lacks other as well. So the best thing we can say about it is that the Mi 8 has been the cheapest Snapdragon 845 smartphone at 2699 yuan ($394). To fix all these bugs, yesterday, the company announced two new handsets – the Xiaomi Mi 8 Youth Edition (aka Xiaomi Mi 8 Lite) and the Xiaomi Mi 8 Screen Fingerprint Version (aka Xiaomi Mi 8 Pro).

Many have been thinking the Xiaomi Mi 8 Pro will be the slightly changed variant of the original model. But now we can state this handset looks like the Mi 8 Explorer Edition more. Seems it’s the same phone with a regular back color. But we have to take a closer look to find out all of its key features.

However, with the launch of the Xiaomi Mi 8 Pro and the Xiaomi Mi 8 Lite, the company joined many other manufacturers that adopt the gradient back effect. Though this trend has begun with the Huawei P20 Pro, now it can be found on various models.

Well, we said this is the same Xiaomi Mi 8 Explorer Edition with a regular back color. But it’s not a correct description because there is only one monotone rear panel variant. Actually, the company offers three variants. One is the old good translucent version. The second is the Twilight gold mirror glass version. And the third one is Meteorite black.

The most attractive version of the Xiaomi Mi 8 Pro is the Twilight Gold. Compared with the four colors previously introduced by the Xiaomi Mi 8, this new color scheme is obviously more lethal for women. The color of the back of the fuselage changes from the top red to the bottom gold, which reproduces the changing beauty of the sunrise time light and color.

It uses a mirror-graded color process with a vacuum nano-magnetron sputtering. This requires the substrate and the target material to be coated by simultaneously placing in a high vacuum chamber, bombarding the target with electrons or high-energy laser, and causing the surface components to be splashed in atomic or ionic form. It is emitted and finally deposited on the surface of the substrate to form a color film. During the process, it is necessary to precisely control the thickness differences of each layer of nano-coating to avoid color drift and lead to product scrapping.

We know that it is mainly divided into structural color and pigment color. The so-called pigment color refers to a color caused by a pigment contained in a living body. It is relatively unstable and is easily affected by the natural environment.

Therefore, the gradient colors used in the Xiaomi Mi 8 series are all represented by structural colors. The structural color is a kind of color which is caused by the wavelength of light and which is generated by refraction, diffuse reflection, diffraction or interference of light waves in the fine structure of the surface of the object.

The Xiaomi Mi 8 Pro’s transparent color is familiar to everyone, consistent with the previous Explorer Edition. The latter was the first smartphone in the world to use pressure-sensitive screen fingerprint recognition and Android’s first 3D structured light technology. At the same time, the Mi 8 series was the first to come with a dual-frequency GPS positioning. But it’s not difficult to guess, the Mi 8 EE will be in short supply because of the transparent back panel it uses. So the company has decided to design another handset from this family in order to bring the screen fingerprint technology to larger masses.

The front of the fuselage is exactly the same as the Xiaomi Mi 8 regular version. It still uses a 6.21-inch screen of Samsung AMOLED. This display has an aspect ratio of 18.7:9.

Of course, the Xiaomi Mi 8 Pro adopts the bangs screen design. The notch part carries many sensors, including the 3?m large pixel front camera and an infrared module. Thus, like the Explorer Edition, it supports infrared face unlock option.

On the back, the Xiaomi Mi 8 Pro uses the same dual-camera found on the original model. Thus the main 12MP sensor is the Sony IMX363, which has a unit pixel area of 1.4?m, supports Dual PD speed focusing, and supports four-axis optical image stabilization.

The Xiaomi Mi 8 Pro comes with the fastest face recognition technology in Xiaomi’s history. Moreover, there is every reason to think it also supports the fastest under-screen fingerprint technology.

You know, the notch screens are mainstream nowadays but they are not beloved by many customers. To solve this problem a few manufacturers have come in with new ideas such as the pop-up front camera on the VIVO NEX, the 3d structure of the OPPO Find X, and the sliding structure seen in the leaked photos of the upcoming Xiaomi Mi MIX 3, Honor Magic 2, and the Lenovo phones.

However, the notch screen is the most common solution for current flagships. Probably, this is the most reliable solution for Xiaomi’s annual flagship. Of course, many may accuse Xiaomi in not using the so-called beauty tip seen on the VIVO X23. But there is a logical answer – the Xiaomi Mi 8 Pro supports the 3D structured light technology to implement face unlock in dark.

In the new version, MIUI increases the speed of face recognition a lot faster than before.

When reviewing the Xiaomi Mi 8 Explorer Edition, we learned it requires the finger to keep pressing the fingerprint recognition area. So the recognition speed and recognition accuracy are relatively general.

In the Xiaomi MI 8 Pro, after the actual measurement, both the recognition rate and the recognition speed have been improved a lot and visible to the naked eye. Moreover, the Xiaomi Mi 8 Pro has also got a Z-axis motor vibration feedback for the screen fingerprint recognition. So the finger press feels the vibration. The screen is simultaneously unlocked. And the whole unlocking process is very smooth.

Currently, VIVO is the leader in this area. So it’s quite reasonable to compare the Xiaomi Mi 8 Pro’s pressure-sensitive fingerprint technology with the fourth-gen fingerprint identification technology used by the VIVO X23. And though these are two different methods, the recognition speed and accuracy of the Xiaomi Mi 8 Pro are too close to that of the X23. After all, VIVO has accumulated two years of practical experience in the screen fingerprint.

In terms of hardware, the Xiaomi Mi 8 Pro comes with the same configuration as the regular variant. So there are no many things to talk about. We just have to recall its key features that include a Snapdragon 845 chip. It uses Samsung’s second-generation 10nm process, has 8 cores with a Kryo385 CPU with a maximum clock speed of 2.8GHz, and Adreno 630 with a maximum frequency of 710MHz.

It’s ideal for playing any heavy game such as the Battlefield and the Honor of Kings. The frame rate is at 40-60fps.

However, because of the screen fingerprint technology used in the Xiaomi Mi 8 Pro, the battery capacity dropped from 3400mAh to 3000mAh. Thus, it will yield its founding father in terms of battery life, it’s almost half a day. But if you are not a heavy user, you won’t have to charge it frequently.

Xiaomi’s Mi line handsets have been always known for their strong camera capabilities. So the Xiaomi Mi 8 Pro and other Mi 8 series handsets do. Our protagonist comes with 12MP wide-angle and 12MP telephoto camera sensors. Among them, the wide-angle lens uses the F/1.8 aperture Sony IMX363 sensor, has a large pixel area of 1.4-micron and supports Dual PD full-phase Dual-core focusing technology. The sub-camera uses the Samsung S5K3M3 camera with a F/2.4 aperture, which is more suitable for portrait shooting.

So not accidentally, the Xiaomi Mi 8 Pro scores 105 points at DxOmark (total 99 points).

At last, the Xiaomi Mi 8 is the world’s first dual-frequency dual GPS phone. To solve all the problems related to the GPS positioning and navigation errors, the Mi 8 supports L1+L5 dual-frequency dual-precision positioning. Generally, there are two factors affecting the accurate positioning – the ionosphere delay (1) and the reflection of buildings (2). Our protagonist uses the L1+L5 dual-frequency dual-channel positioning, which can effectively correct the ionosphere delay. At the same time, the error of the L1 band is 300 meters, while it is 30 meters for the L5. The latter is 10 times more accurate than L1, which effectively solves the reflection interference of urban buildings.

Compared with the Xiaomi Mi 8 Standard Edition, the Xiaomi Mi 8 Pro is more ‘cost-effective’ because it comes with many improvements such as the much popular gradient back panel and the most innovative screen fingerprint recognition technology. If we have a sentence to summarize the Xiaomi Mi 8 Pro review, it will be: ‘This is why we adore Xiaomi.’

The phone is priced at 3199 yuan ($467). The price is quite affordable if taking into account there is no obvious shortcoming in this handset. 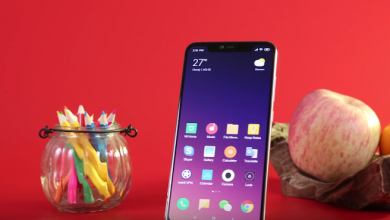