With all the smartphones launching this year, the Xiaomi Mi 7 is also among some of the most hyped ones as it could be the best flagship smartphone at a lower price than other smartphones from manufacturers like Samsung and Apple. Last year’s Mi 6 was an awesome phone but sadly, it didn’t make it to the global markets. We are sure that the Mi 7 will be launched globally and the CEO of the company has already announced at the CES 2018 that Mi 7 is going to pack the Snapdragon 845 processor. 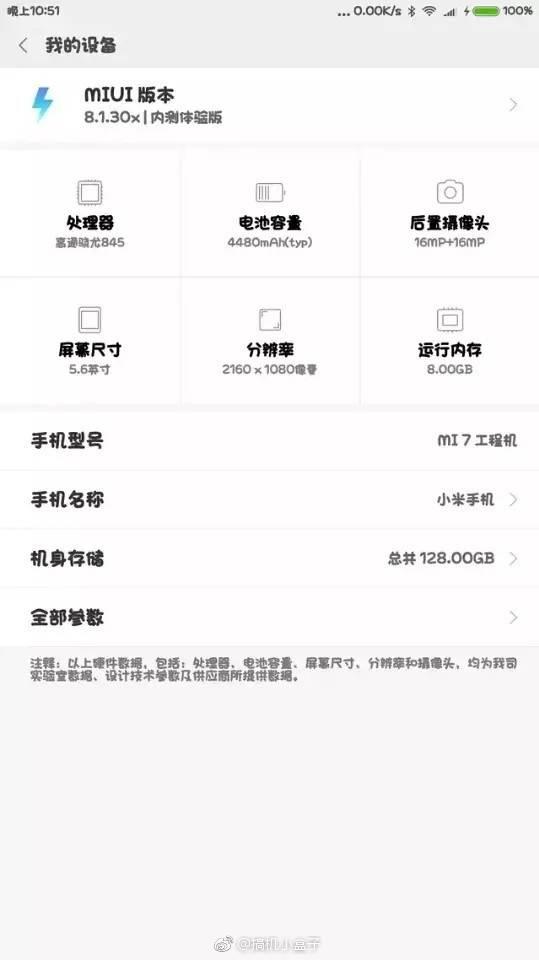 Today, an alleged screenshot of the ‘About Phone’ page of the Xiaomi Mi 7 has leaked out, which has revealed some major specifications of the phone since we know that in MIUI, the specs are mentioned in the About Phone page. If this is true, then we are surely going to see a beast, not just regarding the performance, but also in the battery life since the phone is coming with a massive battery under the hood.

So, as per the image above, the Mi 7 has a 5.65-inch display with a resolution of 2160x1080p which means this is a Full-HD+ display having an 18:9 aspect ratio that we have seen in a ton of phones launched previously. Under the hood, there is an octa-core 2.8GHz Snapdragon 845 processor along with 8GB of RAM and 128GB internal storage. It looks like the screenshot above is the bigger variant with more RAM and storage so, there will also be a 6GB RAM variant with 64GB ROM. The phone packs a huge 4,480mAh battery under the hood which is a big upgrade from last year’s 3,350mAH battery in the Mi 6. This huge battery, along with power efficient Snapdragon 845 and MIUI 9’s optimizations will surely result in a phone with excellent battery life.

Lastly, there are dual rear cameras with 16MP each. We are not 100% sure that this is true, but if it is, then we are sure that this phone is going to give a tough competition to every flagship launching this year.