The Chinese company Xiaomi has recently released its next iteration of the smart projector the Fengmi 4K Cinema Laser Projector for its global clients. The latest Fengmi 4K Projector features an 8mm ultra-narrow border and 8-point picture correction technology. Being a multi-featured small device its best for home and office use. Moreover, the latest projector can provide brightness up to 1700 ANSI Lumens.

From the release point, the Fengmi 4K Projector has successfully grabbed attention from the worldwide audience. The latest device features an elegant and handy design covered within the Silver color body. Its outer layer comes with a glossy and sleek approach which provides a smooth feeling to the user. The Fengmi 4K smart projector utilizes 0.47” DMD display technology and ALPD light source for providing its brilliant performance.

The Xiaomi Fengmi 4K Laser Projector can develop a picture up to the size of 80-150” and throw a ratio of 0.23:1. the Fengmi 4K Projector has successfully grabbed attention from the worldwide audience. The latest device features an elegant and handy design covered within the Silver color body. Its outer layer comes with a glossy and sleek approach which provides a smooth feeling to the user. In terms of dimensions, the projector occupies a space of 456 x 308 x 91mm and weighs around 7.5 kg, slightly larger and heavier than Wemax ONE PRO, but smaller than Mi laser projector.

With the smart feature to connect with MIUI TV, the Fengmi 4K Projector houses 2 GB DDR3 RAM configuration along with the 64 GB internal storage space for keeping your videos and pictures safe.

The concept which is also the uniqueness of Fengmi 4K Cinema Laser Projector is the principle of diffuse reflection. This provides eye protection as it reduces the blue light and provides an anti-glare display for no radiation and visual fatigue of the human eye. This is what makes this projector different from other projectors out there in the Chinese market. There’s the IR sensor on both sides of the projector which decreases the brightness of the projector to a minimum if someone passes by, to avoid visual damage.

Moving to the projection, this projector has a native resolution of 4K which is four times the Full-HD resolution. Moreover, this means you get a sharp and clear image even on a 150-inch maximum projection display. Like most of the laser projectors, it uses theTexas Instruments (TI) custom DLP digital light processing technology for clearer and brighter picture performance with rich and realistic details.

The greatest highlight of the projector Fengmi 4K Cinema Laser Projector is the picture brightness of 1700 ANSI lumens generated from an ADLP3.0 light source with 5000 lumens. It’s equivalent to the much expective Mijia 4K laser projector and allows you to use the projector in daylight as well with readable and clear projection. Along with the incredible 3000:1 contrast ratio and HDR10 decoding, one can expect a rich, colorful projection.

Fengmi features a large depth of field ultra-short focus lens of 0.233:1 which is the same as the Mijia 4K projector. You can expect a 150-inch projection with a distance of 30 to 40 cm from the wall. The new ALPD 3.0 laser fluorescence display technology, combined with a red light ratio of 16-18%, makes the reproduction of characters and natural colors more realistic. Since 4K laser projectors have a higher resolution the light source has a life of more than 25,000 hours (half of the 1080p projectors) and can watch more than 10,000 movies of 2 hours.

With 64GB of ROM, there’s plenty of space to download apps and store media. Under the hood, there’s the Bluetooth 4.0 module as well to connect to an audio system. The project supports 3D as well but you will need separate 3D glasses. Concerning the sound system, it does support DTS audio.

Chinese projector usually has a poor UI and OS. However, this one is an exception as Fngmi features the MIUI TV OS which is used in Xiaomi projectors, TV boxes, and TVs. If you love a title-based UI similar to Amazon Fire OS, you might love this OS. There’s plenty of content out there, mostly in Chinese. Apart from the Chinese language, you can change it to English as well.

How to boost your Instagram stories with Vector Graphics 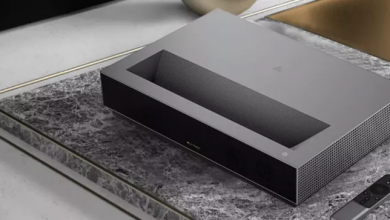