Recently, Xiaomi ecological chain company Fengmi Technology released a new projector product on the Xiaomi Youpin platform with a crowdfunding price of only $999. Following the launch of Fengmi Smart, a 4-channel LED projector by Fengmi in August this year, the launch of the higher positioning Fengmi Vogue home video projector, which reflects Fengmi’s determination to enter the overall projection market. This Xiaomi Fengmi Vogue Projector refers to the domestic high-end DMD chip which is 0.47, with the same brightness range, and the hot-selling home projector that costs about $5,000. Let’s take a look out of the box to see how this projector performs.

When I first received the Xiaomi mi projector vogue edition, the first impression was that it was larger than the previous Fengmi projector Smart, with a logistics box of 274 * 274 * 256mm and a weight of 4.8kg. Unpacking the logistics packaging box is the product packaging. The packaging box is white, and it is still displayed for the product name and selling point. Product name Vogue represents fashion.

Remove the upper tamper-resistant sticker. The upper part is the envelope with the corporate logo printed on it, which contains the projector manual, product warranty certificate, and lens cleaning cloth.

After picking up the protective foam, you can see that the machine is placed underneath. At the bottom is the accessory box, which contains the remote control * 1, the power cord * 1, and the 7th battery * 2.

Open the package completely to see the Xiaomi fengmi vogue projector. The design of the whole machine is relatively simple and full of modernity. The top is relatively simple, with only one power button. The front is still the lens and focus sensor. The side is the air inlet and outlet. * 2, headphone and other audio 3.5 * 1, added SPDIF interface and Gigabit Ethernet port, the bottom is product information and a 1/4 screw hole.

The Fengmi Vogue projector still uses the Xiaomi TV MIUITV system, which has exactly the same operating experience for Xiaomi TV users. Its practical system of various products, in the end, I still feel that MIUITV is more convenient to operate, whether it is the layout or the infinite drop-down movie classification on the home page, you can quickly get started. The fixed process of connecting to wifi, focusing and other functions after booting is the same as my previous article, so I won’t write it here. Xiaomi fengmi vogue projector brightness is 1500ANSI lumens, and the picture quality still uses mainstream 1080P Full HD, equipped with the new Fengmi self-developed FAV picture quality optimization technology, for the projector’s brightness, colour gamut, sharpness, skin tone restoration, HDR The display has been optimized. How is the display effect? Take a look.

In order to better compare the projection effect of the machine, I looked for a brand of 5,000 yuan selling models to compare, to see who has the highest degree of reproduction and the colour display effect is better.

The official model’s brightness is 1900 ANSI lumens, and it uses the same TI 0.47 DMD chip as Peak Meter. The brightness range should be the same. This time, taking photos with the same camera parameters. From the comparison picture alone, I feel that the other party is slightly brighter and more vivid. Then we compare the original picture to see who has a higher degree of restoration.

Through the original image, it can be seen that, like the background on the right side of the image, Xiaomi fengmi vogue projector restores better background color, and the other machine is more like hard and added saturation to achieve a vivid effect. Although the picture quality is bright, After a time, fatigue effects will occur. There is no obvious difference between the two products in terms of brightness. As a millet ecological chain enterprise, Fengmi is subject to restrictions on publicity and compliance, and the nominal parameters are also more realistic.

As mentioned above, after using so many projections, I still feel that Xiaomi’s MIUITV system is very useful. The wireless pull-down on the homepage will indeed give some good suggestions when you don’t know what to watch, meanwhile, The built-in application store can install many applications to meet your various entertainment needs. In addition to the app store, there is also a mobile app called Xiaomi Projection Screen. At its most basic, we can use it to turn the mobile phone into a remote control and take screenshots. Screenshots of the interface below are operated through this APP, full HD full screenshots. In addition, there are more softwares that can be loaded on the APP, and all kinds of live broadcast software and game software are ignored. In addition to multi-party applications, the more convenient one is the remote control. First of all, the 11 key is very simple to understand. At the same time, the voice button on the remote control can be searched after you press what you want to see. Trouble entering letters manually.

Can projection replace TV? An environment like a living room cannot be replaced by a projector. Laser TV with screen is good. But like a young person’s bedroom or a scene showing content to a child, a projector is too happy. The bedroom can have a big picture, and it looks better, the diffuse reflection picture is more suitable for human eyes, and less blue light. Back to Xiaomi fengmi vogue projector, as a projector, 1500ANSI lumens can have a brighter picture under the light, which is very good, with high contrast and bright and dark boundaries. A projection that costs $999 more than it, although the sound quality is supported by Harman Kardon, but the sound performance is not leading in high and low frequencies. Feng Mi Vogue projector uses self-developed FAA sound engine, which also has a good improvement in sound quality. In general, the same bright range and display chip as the $5,000 hot-selling models on the market, real brightness promotion, Xiaomi’s content system, and finally the $999 price, if you want a home projector In this case, this Fengmi Vouge is a good choice. 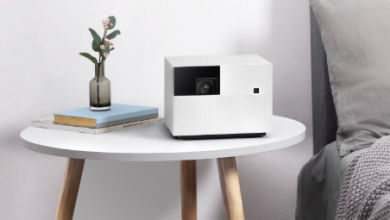 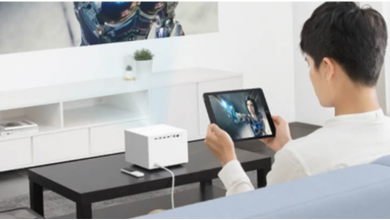