The Smartphone’s market is a world of constant changes, where companies seek to win their respective piece of cake. As is customary every quarter, the data of the total sales of the companies have come out, and with the most prominent competitors already exposed, IDC has been in charge of comparing all the information so that consumers have a clearer picture. And we must say, Xiaomi is in their best shape.

The growth of Xiaomi is unbeatable

The first interesting fact is that Apple managed to demonstrate its dominance in the market of Smartphones again surpassing Samsung in 3.2 million units sold. However, these figures do not represent any achieve for those in Cupertino (regarding the amount, since in profits is another story because of the increase in prices). In fact, of the five most important companies in the market, four has not been able to surpass its sales figures.

The story is very different with Xiaomi, who have managed to grow concerning their report of the same period but of 2016. Not only grow but devastate, and is that their sale of phones doubled. The company experienced an increase of 96.9%, going from selling 14.3 million telephones to 28.1 million. The figure means that the company now owns 7% of the total market share.

Xiaomi also grows in its country of origin

Xiaomi not only dominated the world market. The data in China has also come out, showing that within the big companies that make life in this market, Xiaomi has been the one that grew the most. These data are critical when we consider that statistically, China is the most significant technological market worldwide, so the achievement is at least, remarkable. 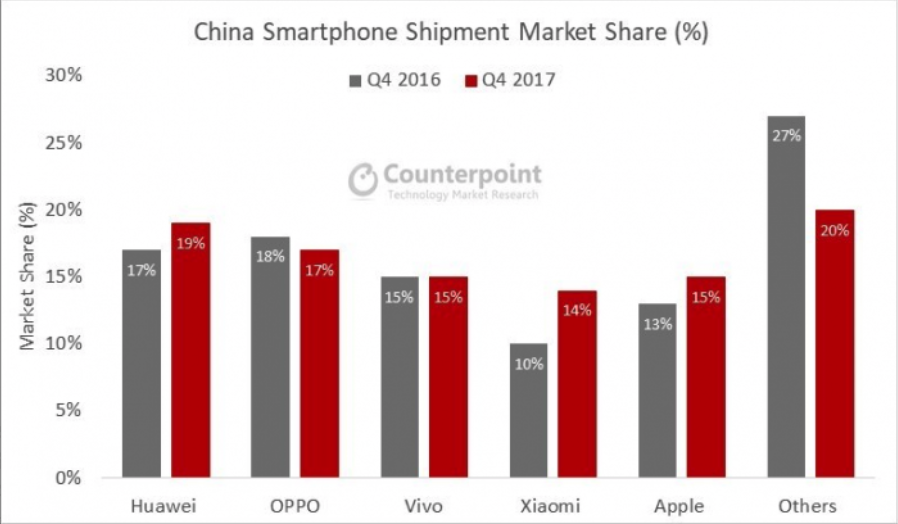 The significant innovations that the company has presented in the last year helped it to position itself so well in the market. The Xiaomi Mi MIX 2 revolutionized the way the world sees Smartphones, while the Mi 6 represents the best quality in a phone at an affordable price. It is expected that Xiaomi will bring many devices at MWC 2018, soon to be held in Barcelona.

Grab The Zanflare B15 Bluetooth Speaker Light For $22.99 on Gearbest (Coupon)