Xiaomi recently unveiled its latest Mi Mix Alpha smartphone at an event in China this week. At the same event, the Chinese giant also announced the launch of the truly wireless Xiaomi AirDots Pro 2, it’s latest in the range of affordable wireless earphones. Similar to their predecessors from last year, the AirDots Pro 2 seem highly inspired by the Apple AirPods in terms of design language.

Xiaomi AirDots Pro 2 has a renewed design, leaving aside the first generation Xiaomi Mi AirDots Pro that reminded us so much of Apple AirPods. This time, maintaining the minimalist lines that characterize Xiaomi, has opted for a design of its own, combining the same way, two headphones with its new case that also acts as a charger. Besides being beautiful and discreet, the Xiaomi Bluetooth headset is also comfortable. It weighs just 4.5 g and is designed to fit the ear causing less pressure and no discomfort.

The built-in proximity sensors are not an excuse for the lack of operability, but they are still an interesting feature. The headphones automatically detect when they are removed from the ear and pause playback automatically. If we put them back in the ear, playback resumes automatically.

If you are looking for a headset that, besides playing your music, is excellent for receiving calls, Airdots is for you. It has ENC technology to reduce outside noise, so you can clearly hear who is on the other end of the line and can answer calls even when in noisy environments. With this headset, you don’t have to have your phone within reach to listen to music or answer calls. With simple taps on the phone itself, you can answer calls, skip back or forth to the desired songs and stop playing them simply remove any of the headphones.

Besides being easy to use, it also easily connects to your smartphone. After you connect it to your phone for the first time, whenever you open the box to use it, it will automatically establish the connection. In addition, the headset’s Bluetooth is 5.0, meaning it is fast and stable. The company claims to offer up to 4 hours of playback and with charging case, it will offer up to 14 hours. USB Type-C charging for the case takes 1 hour to charge completely. Each headset weighs about 4.5 grams and the case weighs 50 grams.

You know when you want to hear your favorite song, but who’s with you isn’t a fan of the same sound? With Airdots Pro 2 you don’t have this problem. It has a standalone connection, so each headphone can be connected to a different smartphone, so as long as you enjoy the sound you like, the other person can hear what you prefer.

Xiaomi AirDots Pro 2 is now available on Gearbest For Just at $55.99 on sale. Click the following button for order now: 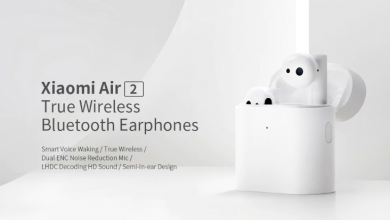