The Xiaomi smart rearview mirror is a completely new multifunctional gadget that makes driving easier and safer. It is embedded with Built-in sensors and a dash camera which allow it to monitor the road condition, predict the possibility of a crash and notify you of the obstacles while parking. The device also has built-in a GPS module to help you keep your directions while driving around. It can also serve as a DVR car camera and can be rotated, users can adjust to a comfortable viewing angle

The Xiaomi smart 6.86-inch rearview mirror comes with a big screen, which reduces the false touch rate, reduces the time cost of the driver to obtain information?the driver can get a complete information at a glance, make driving more focused, and increase the safety of driving. Talking about its size, the rearview mirror can cover most of the rearview mirror, the frame has a rounded R angle. The mirror surface is closely connected to the frame, smooth and seamless. It should be noted that the back of the device uses a matte plastic material which would definitely reduce overheating. There is also a heat dissipation area

The Xiaomi 70mai Smart Rearview Mirror Supports 3G / 4G network which ensures you don’t miss any important messages. The rearview mirror can be bonded to WeChat, after the binding, you can send and receive messages by voice, avoiding missing important messages and reduce the security risks caused by mobile phone WeChat.  The top is divided into the micro USB port and the input interface for the AV signal. On the bottom is the SD card socket. It has a sealing cover to prevent the SD card from being lost due to vibration

After installing the reversing camera, the front, and rear dual function camera recording can be accomplished. After the Gear parking is reversed, the screen rearview mirror is turned on for the reverse image and the road condition behind the car are clearly and completely observed. 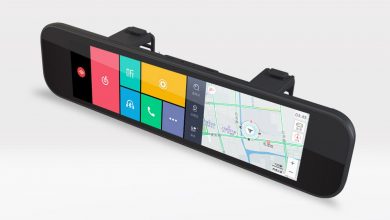