Uwell Caliburn Pod System Kit is a first pod vape kit from Uwell. It has elegant appearance and ultra-thin body, powered by an impressive 520mAh built-in battery. With Suck activated switch design, meaning you can directly vape without the need for pressing a button, in addition to the suck activated switch it also has a press button which will allow you to slightly preheat the coil (if needed) prior to vaping. The pod cartridge has 2ml capacity and comes with a top filling system which can reduce leakage. This pod vape kit is a perfect suit for beginners.

The Uwell CALIBURN 11W Pod System is a finely-crafted vape kits, combining a dual firing mechanism, aluminium alloy chassis, 520mAh battery, and utilizes Uwell’s proprietary Pro-FOCS flavor technology to maximize the effectiveness flavors. Constructed from sturdy but lightweight aluminium alloy, within the CALIBURN is a removeable 520mAh rechargeable battery designed to allow for charging outside of the device to ensure no downtime for the CALIBURN when needed. In addition, the CALIBURN features a dual method firing mechanism, using either the draw-activated firing mechanism or the intuitive firing button. Should the draw-activated firing mechanism fail, the intuitive button should still continue to function when needed. Furthermore, the CALIBURN Pod System possesses and uses the Pro-FOCS flavor technology, recycling drawn airflow through the atomizer core to load the airflow with condensed flavor. A top fill 2mL pod is used to contain today’s favorite eJuice, firing at resistances of 1.4ohm, to provide the complete vape experience. 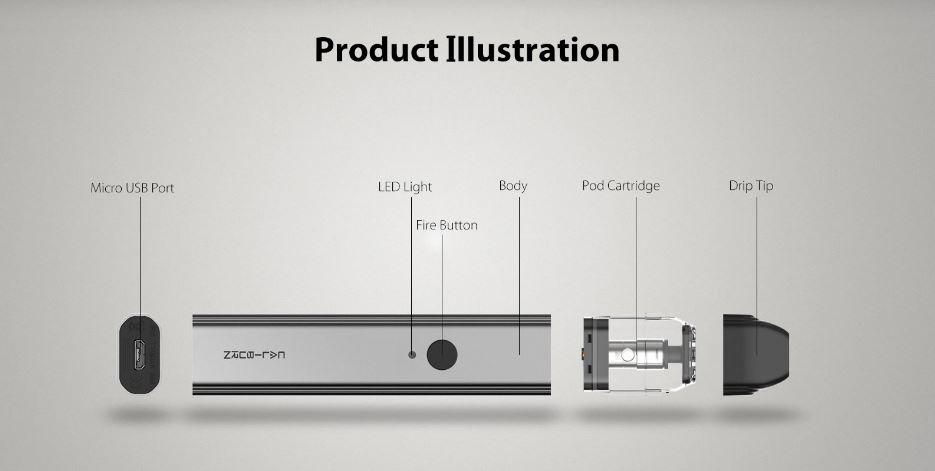 The Uwell Caliburn has a very simple design. The device is unremarkable in its simplicity, but its straightforward appearance and operation are also its biggest assets. The battery section has a single button on its front, along with a small LED to show battery life (green – over 60%, blue – 30-60%, red – under 30%) and when this all-in-one device is in operation.

The entire battery chassis features an aluminum alloy build, and when the pod is installed, the unit weighs just over 30g, making it lightweight and portable. Together, the Caliburn measures just over 110mm or 4.3 inches and has a width of 0.5 inches.

There is a bottom USB port for charging the 520mAh battery, and with 1A charging the battery only takes about half an hour to recharge. Like the Suorin Edge, the Caliburn has a combination drip tip/pod but with one important difference – the drip tip is removable, which hides the top-filling method of the system.

To get other amazing deals, and best prices, click Here