UleFone is a smartphone manufacturer based in China, who have a huge customer base around the world. In particular, the company is recognized for producing smartphones and with rugged functions to meet extreme working conditions. In this sense, the company presents its next rugged phone, the UleFone Armor Flip,  which has features and qualities useful for any field.

Design is one of the biggest attractions in UleFone Armor phones  . In fact, the company designs it for the fulfillment of special purposes. In this case, highlighting dimensions of:  11.50 x 5.75 x 2.20 cm / 4.53 x 2.26 x 0.87 inches , and weighing: 140 grams, making it an extremely versatile device for those who want a compact and resistant device. 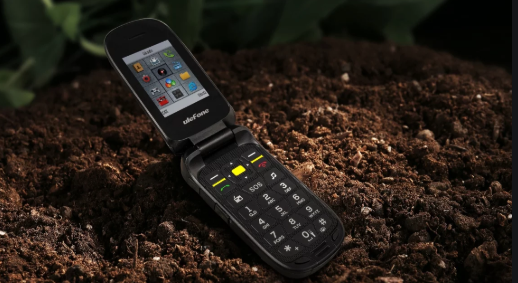 Buyers will get a single color option, black . In addition, the overall style of the case denotes details in yellow that make it stand out. The body is made of polycarbonate and GF TPU material , optimal to withstand bumps, falls and scratches. The UleFone Armor Flip phone has a dual display , one on the outside (1.44 inches) and the other (2.4 inches), located inside the cover. 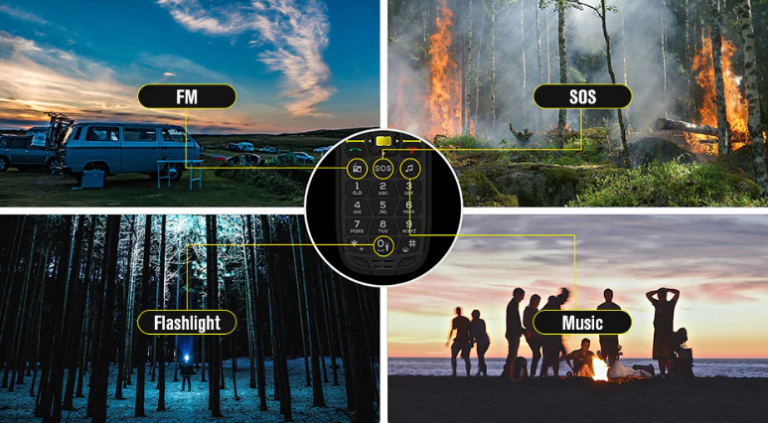 Inside, the phone has a numeric keypad along with other buttons , such as: SOS, FM hands-free, flashlight, music, etc. Similarly, on one side we can see a 3.5 mm connector, a TF card slot and a micro USB port . Simply put, the amount of standard ports needed for connection purposes.

The rugged UleFone Armor Flip phone features a dual screen approach for easy viewing. The flip cover holds both the exterior and interior screens. The external (secondary) screen measures 1.44 inches , while the main (internal) screen is 2.44 inches , both are TFT screens,  however, the fundamental screen for the display will be the internal one, due to its resolution of 320 × 240 (QVGA), with which it will impart moderate image quality.

Therefore, the screens are a good surface to visualize software applications and the external screen will allow us to see the time, the numbers of incoming calls, SMS, etc. You can perform the main tasks on the internal screen, such as paying for games, dialing a phone number and much more.

The UleFone company has decided to integrate in this classic phone a camera, which is located on the outside of the flip cover and is 1.3 MP . In addition, the camera has an F / 2.8 aperture along with a photographic resolution of 640 × 480 . Therefore, although its quality is not high performance, it can still be used to capture the good times we have during our journeys.

On the other hand, we will also have the freedom to capture photos and videos during the night, thanks to its multi-purpose flashlight .

The  UleFone Armor Flip comes integrated with a processor  MTK6261A  of a single core , powerful enough to perform the basic tasks of a phone and a little more. However, it only has  32 MB of RAM and 64 MB of ROM to store its data locally, making it a low capacity device, but there is no need to fear, since it has the option to expand its storage capacity with a TF card up to 32 GB . 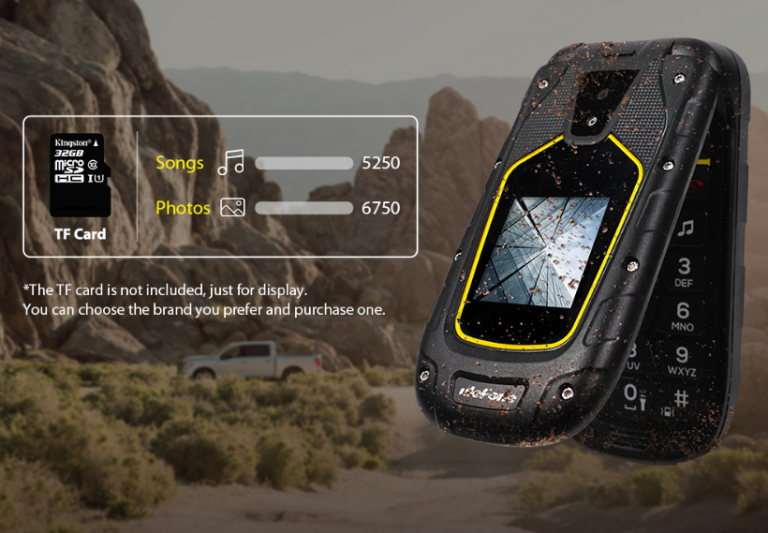 Similarly, it also supports some audio formats such as MIDI, MP3, AMR, WAV and AAC, allowing you to synchronize MP3 song lyrics. Therefore, users have a wide choice to deal with different multimedia extensions without using a conversion application.

To connect the phone with the outside world, it has a GSM type network , with which we will keep communicating with its 2G frequency : GSM, GSM 1800MHz, GSM 1900MHz, GSM 850MHz, GSM 900MHz . In addition, the UleFone Armor Flip has Bluetooth 2.0 , which we can use to send and receive data, along with files via Bluetooth wirelessly. 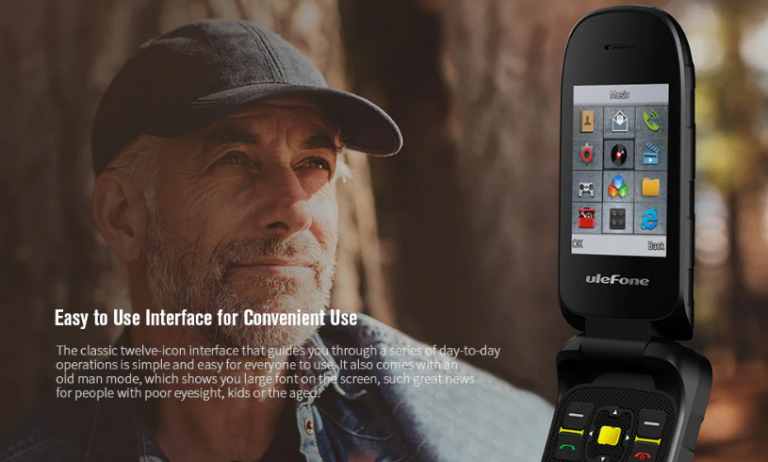 When it comes to the power source, the UleFone company opts for this phone a 1200mAh battery  , which for some of us may not seem like a high performance power source. However, if the phone is well used, it can guarantee us a service of 8 hours in talk time and up to 300 hours (about 13 days) in standby mode .

Therefore, the phone feature can be adjusted for average power consumption. Once the battery is filled, we can take it to our work, making sure it will work throughout the day without any interruption. 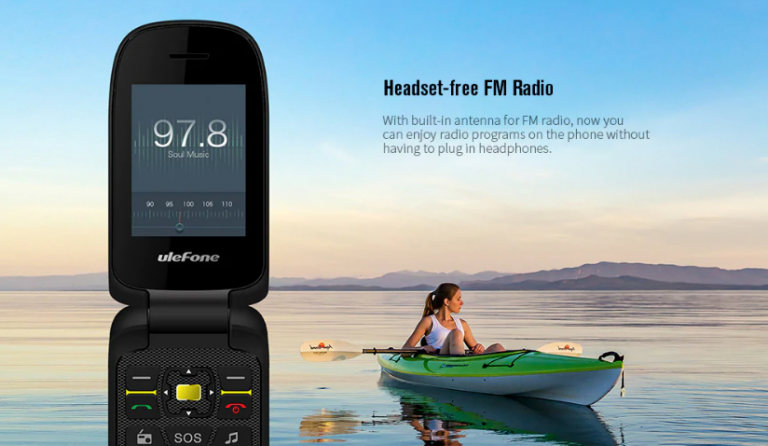 On the other hand, the phone comes with a built-in radio antenna. You can play the radio without using headphones.

The rugged UleFone Armor Flip phone is specially designed for people who work in various industrial areas or extreme athletes. So, it is a triple prevention phone with waterproof rating IP68 and IP69K . 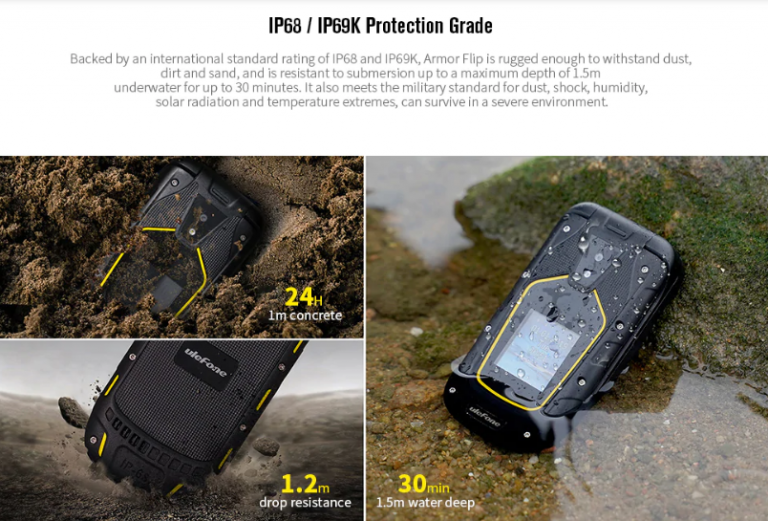 The company has carried out many tests to guarantee its strength, of which we can mention: Moisture test, low pressure test, acid atmosphere test, solar radiation test, etc. Demonstrating its resistance and robustness in multiple situations, making it resistant to shock, water, breakage and dust.

After meeting the rugged UleFone Armor Flip phone, we hope you have convinced yourself to purchase it. If you are thinking, what is the price of this product and where can I  buy it? We invite you to the Gearbest online store, where you can purchase it for only  $ 54.99 (€49.22). To make your shopping experience easier and faster, below we will leave the direct link to the product page. Don’t forget to check the links for new offers and discounts!