Wireless audio gadgets are the rave now, but it wasn’t always like this. Bluetooth has been around for more than a decade, and while the convenience of going wire-free offered by the technology was acknowledged earlier on, due to issues with audio quality and connectivity, its use as a medium of streaming audio didn’t become mainstream until Apple took the bold step to exclude the 3.5mm headphone jack from the iPhone 7 in 2016.

Since then, the technology has improved. While not totally comparable to wired audio streaming yet – at least to audiophiles – Bluetooth audio quality has advanced to an acceptable level, and you cannot but appreciate the portability Bluetooth speakers offer, allowing you to pump out music untethered by cables. To sweeten things up, manufacturers are now throwing things like waterproofness into the mix. If you want a portable Bluetooth speaker that can withstand splashes of water without going kaput, and without drilling a hole in your pocket, the Treblab HD7 is a device worth looking at. Find out why in this review. 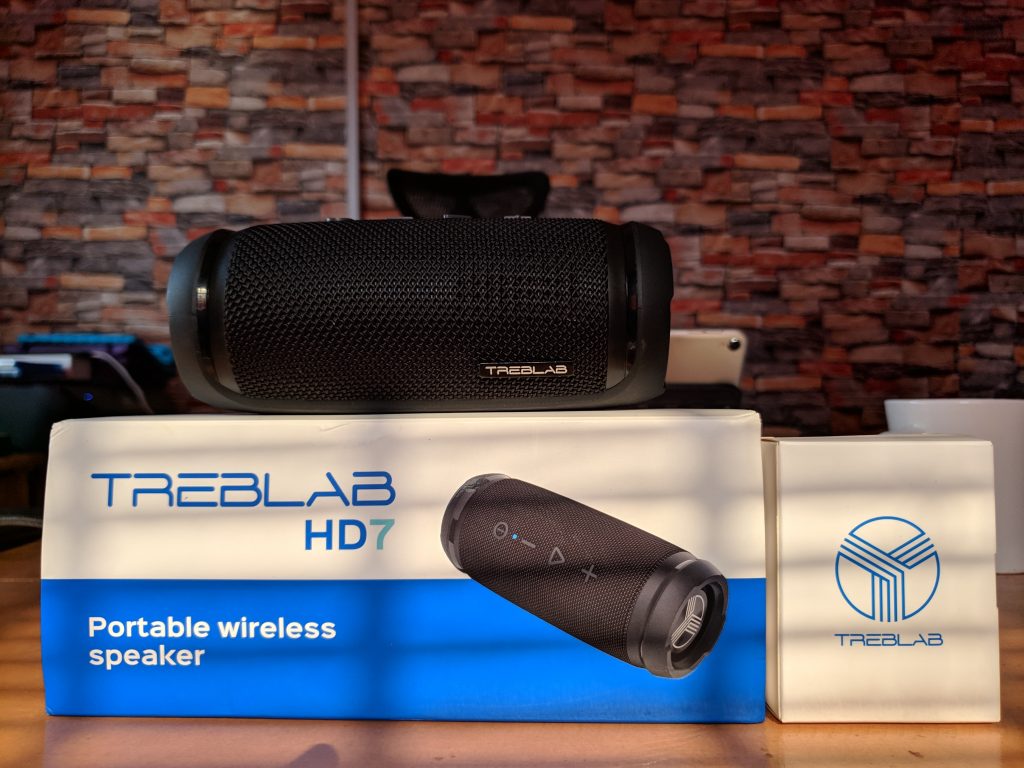 The package consists of two compartments, one housing the Treblab HD7 speaker, and the other containing several items and accessories including: 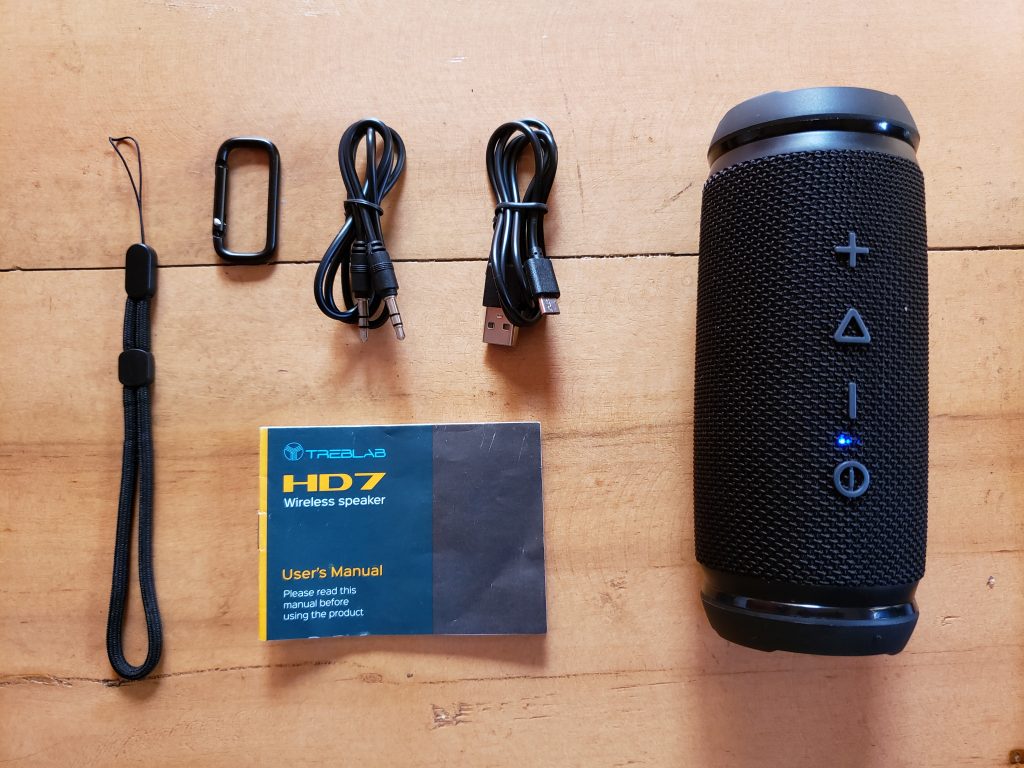 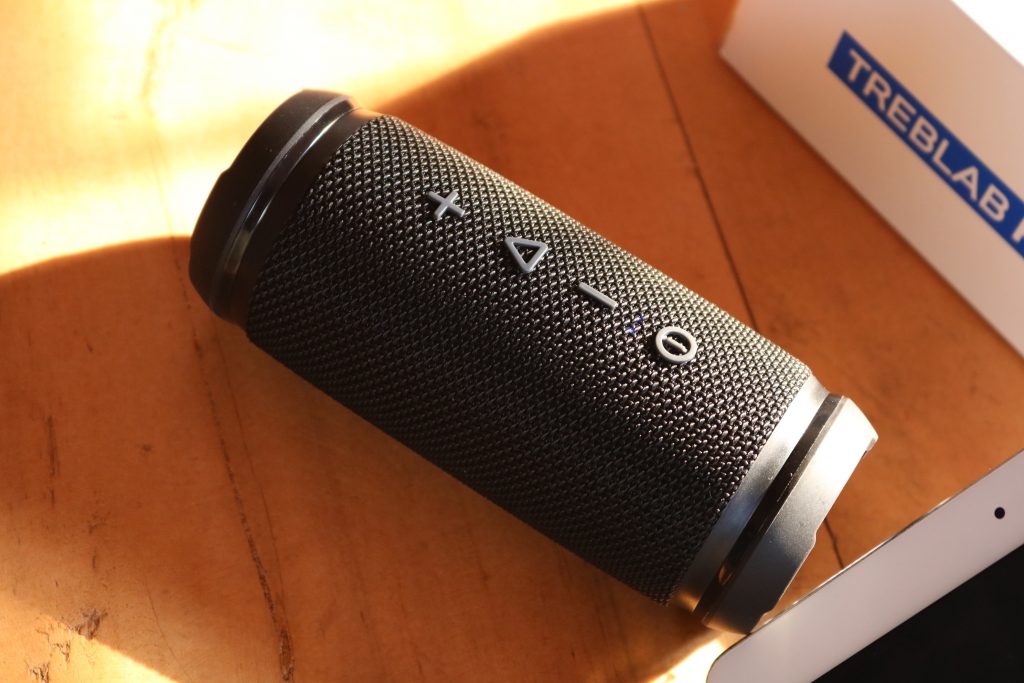 One thing the Treblab HD7 has going for it and gives it an edge over similarly-priced, and even less expensive Bluetooth speakers, is its portability. The device is very handy, with a round, cylindrical design that makes it suitable for fitting into a bottle or cup holder. Sure, the design isn’t original, but looking for original designs amongst tech gadgets nowadays, especially budget ones, is akin to looking for a needle in a haystack. The speaker weighs just 365g, and with the combination of this lightweight and portable build, you can easily throw the device into a backpack and carry it around without noticing the difference.

The Treblab HD7 has four speakers; two located at alternate angles on the sides of the device, and two passive radiator subwoofers at the ends of the cylindrical build. This arrangement allows you to get a 360-degree sound feel. 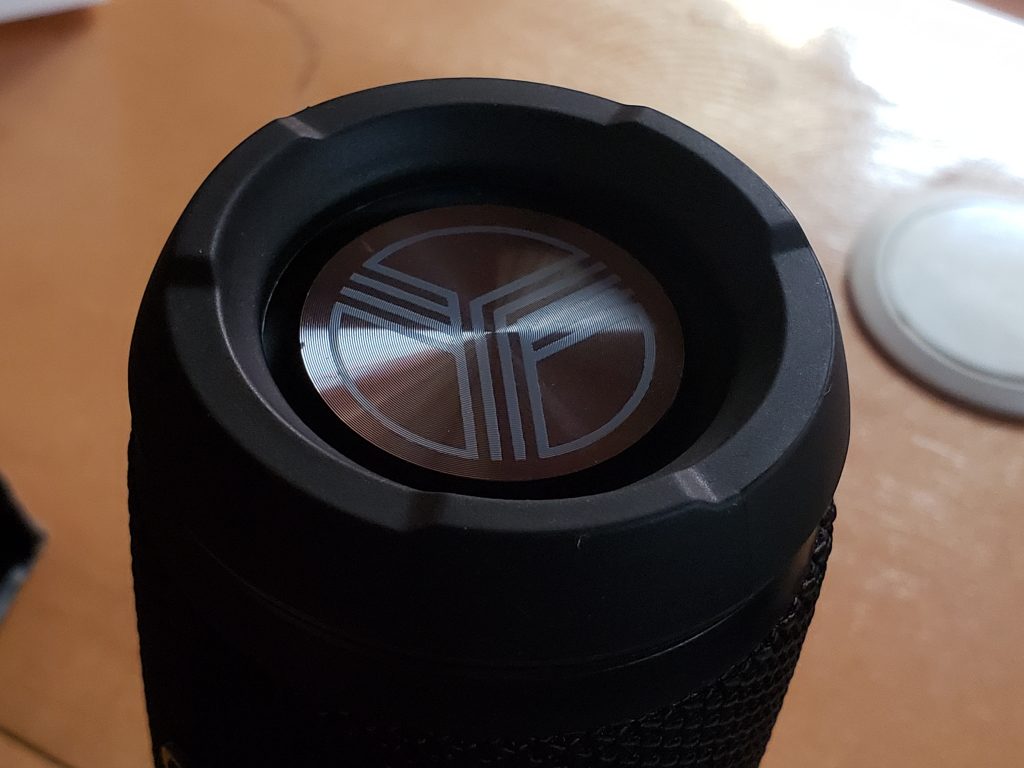 The dorsal side of the device contains four buttons for controlling the speaker’s operations; one for turning the speaker on/off and switching between Bluetooth and AUX connectivity modes, one for reducing the volume and returning to the previous track, one for playing/pausing audio playback, and one for increasing the volume and skipping to the next track. These buttons can also be used in different combinations to handle phone calls and reset the device, as instructed in the user manual included in the package. The buttons feel sturdy and give haptic feedback, and the different shapes used to design them makes it easy to find the buttons and control the device, even in the dark. 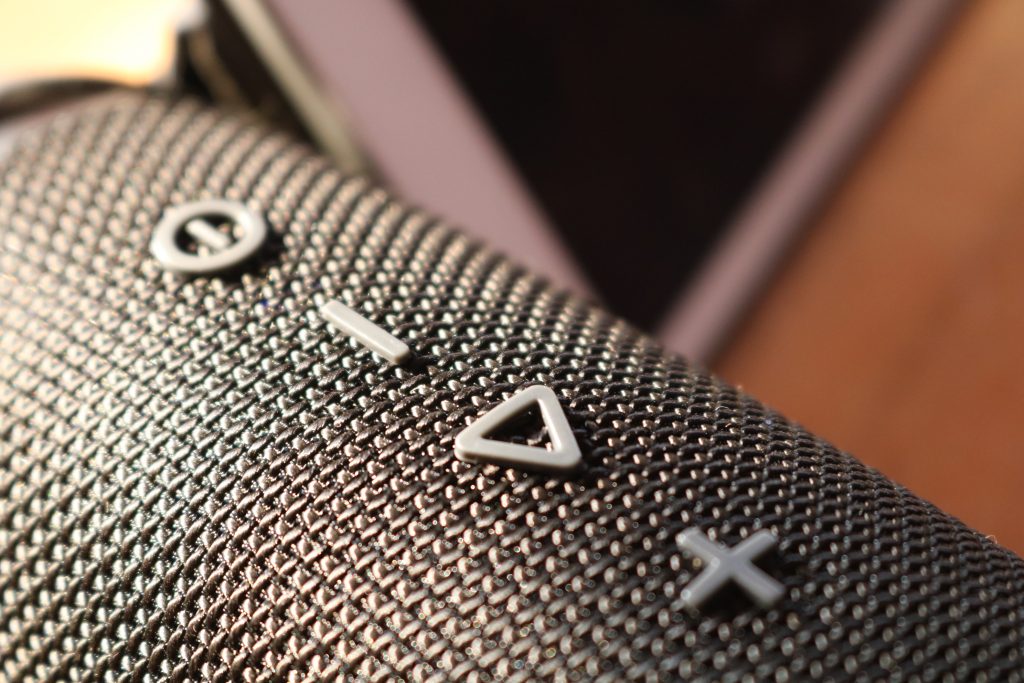 The device is not completely round, as it has a base which is used to stand the speaker while it’s in use, and doubles as a house for its various ports. A flap on the base covers the micro-USB port and 3.5mm audio jack, and other ports on it are a UNC bike mount and a section for the carrying strap and carabiner.

I’ve been using this for more than a month now, and while I’ve not had cases of it rolling off the bed, as I have a large bed, this speaker has gone through its times somewhat with me. I regularly toss it into my backpack, roll it around on the table, and other such activities. Plus, the waterproof rating (more on this below) means you don’t have to worry about the durability of these for a long time. The manufacturer doesn’t specify that it has been drop-tested so take this with a grain of salt: I believe the HD7 should be able to handle mild drops here and there. 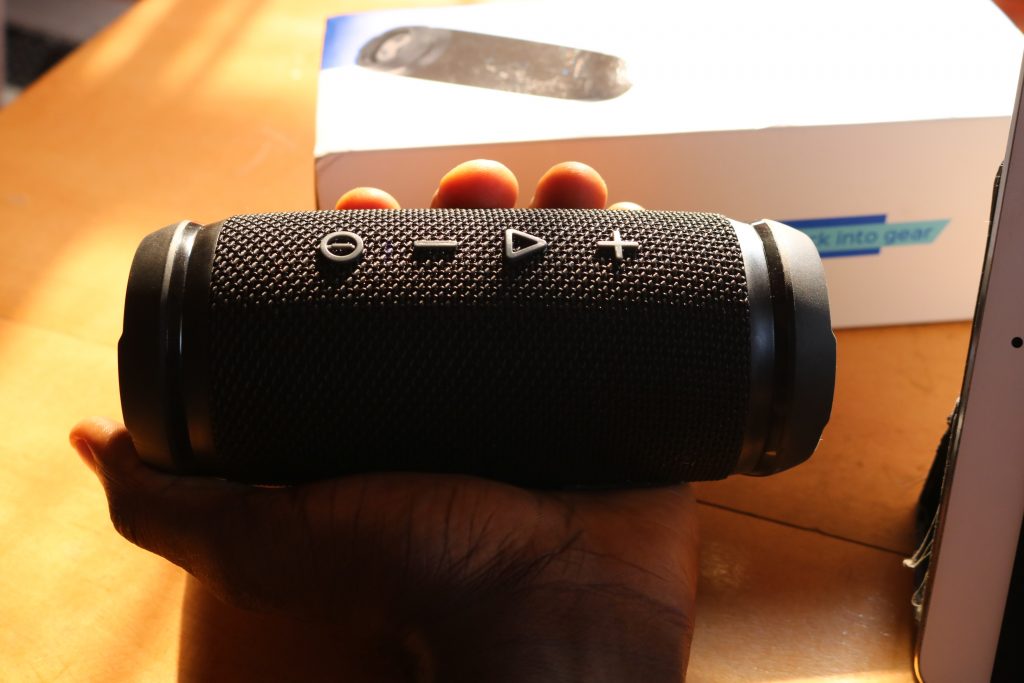 While the Treblab HD7 won’t score points for looks, as it’s only available in one colour (black), its portability, durability and sturdy design coupled with its budget price tag make this easy to overlook.

As mentioned earlier, the HD7’s four speakers are arranged in such a way that you get a 360-degree sound experience. The utility of this is immediately noticeable when you compare it side-by-side to a unidirectional speaker, like the JBL Charge 4; this comes down to personal preference, but I’d pick 360-degree sound over directional sound.

Audio is clear on the Treblab HD7; midrange sounds are excellently reproduced and come out clearly, and treble sounds are outputted crisply, but not to the point of sounding harsh or unbearable to the ears. Things are different with the bass though; this device struggles to reproduce bass frequencies accurately, and you’ll have to really turn up the volume if you want to hear your bass. Increasing the volume is not an ideal solution, though, since doing that increases the volume of other audio frequencies together with bass, and you shouldn’t have to listen to songs at louder volumes to get a balanced sound.

I was curious as to why the bass response was so poor, and did some digging. After poring through the device’s detailed specifications, I’ve concluded that it’s due to two things: the minimum frequency response and maximum power output. Sub-bass and bass frequencies that are audible to the human ear range between 20Hz to 250Hz, and the HD7 has a minimum frequency response rating of 200Hz. This means the speaker can conveniently reproduce only a small fraction of bass frequencies from audio files, hence the poor bass response. Also, the speaker’s combined power output of 10W is not enough to sufficiently project bass sounds over distances.

The summary of this is that the Treblab HD7 is not heavy on bass, so if you do love to hear your bass in songs, you won’t be satisfied with this device’s performance. I tried using equalizers to boost the bass response, but that didn’t make much difference.

With a dynamic range of 60dB, the Treblab HD7 is best-suited for indoors usage. It does get quite loud, however, and can conveniently be used to power a small outdoors party. One of the downsides of using budget speakers is the distortion of audio at high volumes, but the HD7 keeps producing clear and crisp sound even at maximum volume. I’ve been using this for over one month and still haven’t noticed any distortion, not even once. 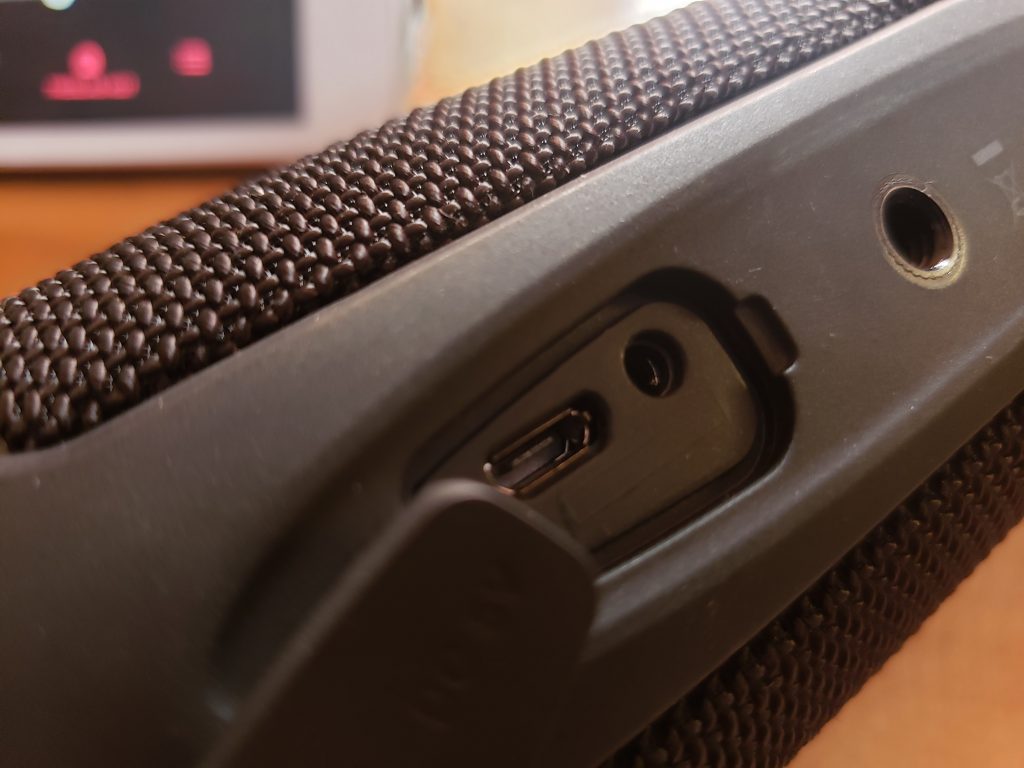 The Treblab HD7 comes with Bluetooth 4.2, and with that comes a rated signal range of 10m (33 feet). The Bluetooth connection on the device is very stable, and I’ve not had any issues whatsoever since I started using it, even with several walls and obstacles between the speaker and the audio source.

There’s also no lag between audio and video, both when playing local video files and when streaming videos from YouTube. A microphone is located in the base, and its quality is surprisingly good; friends couldn’t tell that I was speaking through a speaker’s microphone when taking calls via this device’s mic.

One grouse I have with the connectivity is the location of the input ports on the base, which means you can’t charge the device or use the 3.5mm jack while it’s on the base; you’d have to stand the device on one of its subwoofer endings. This isn’t a dealbreaker, but it’d be nice to not have to further muffle the already-faltering bass output.

The HD7 has a great battery life, for a budget device; the manufacturer claims it can last 25 hours at 50% volume, and I’m convinced that figure checks out from what I’ve seen of this. Once, when I wanted to drain the speaker of its battery quickly (for testing purposes), I played music on it at maximum volume over the night, and by early morning the device still had about 30% juice left. Coupled with the fact that you can play audio on it while charging it, this device is one of the best in terms of battery life amongst budget Bluetooth speakers in its price range.

The only gripe I have with it in this department, is the inclusion of a micro-USB port, instead of a USB-C port. Most gadgets produced nowadays, even at budget levels lower than the HD7’s come with USB-C ports and chargers. With the micro-USB port, you’d have to charge this device for approximately three hours to get a full charge. This inconvenience is only mitigated by the fact that you can use it while it’s charging. 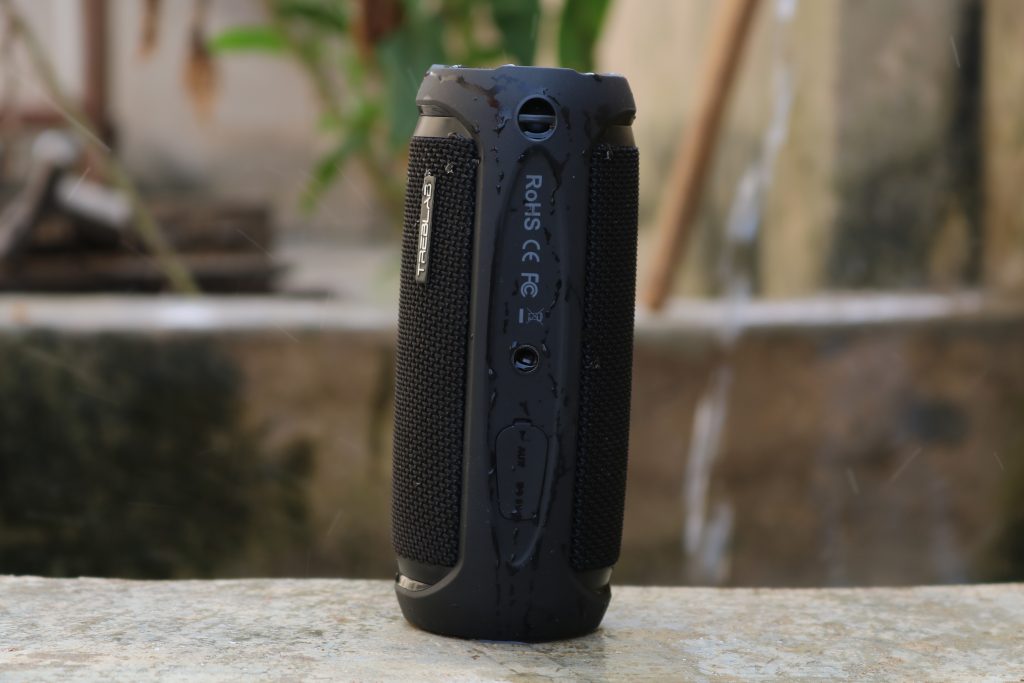 Like the xFit earbuds from the same company, the Treblab HD7 has an IPX6 certification, which denotes it as safe for use with strong water jets from any direction. While you can’t submerge this in water and hope to keep using it, you can comfortably place it near you while showering, or at the edge of the pool, and not worry about what those splashes of water will do to it. I personally tested this, and my unit of the HD7 speakers still works fine, weeks after I sprayed it unrestrainedly with jets of water. 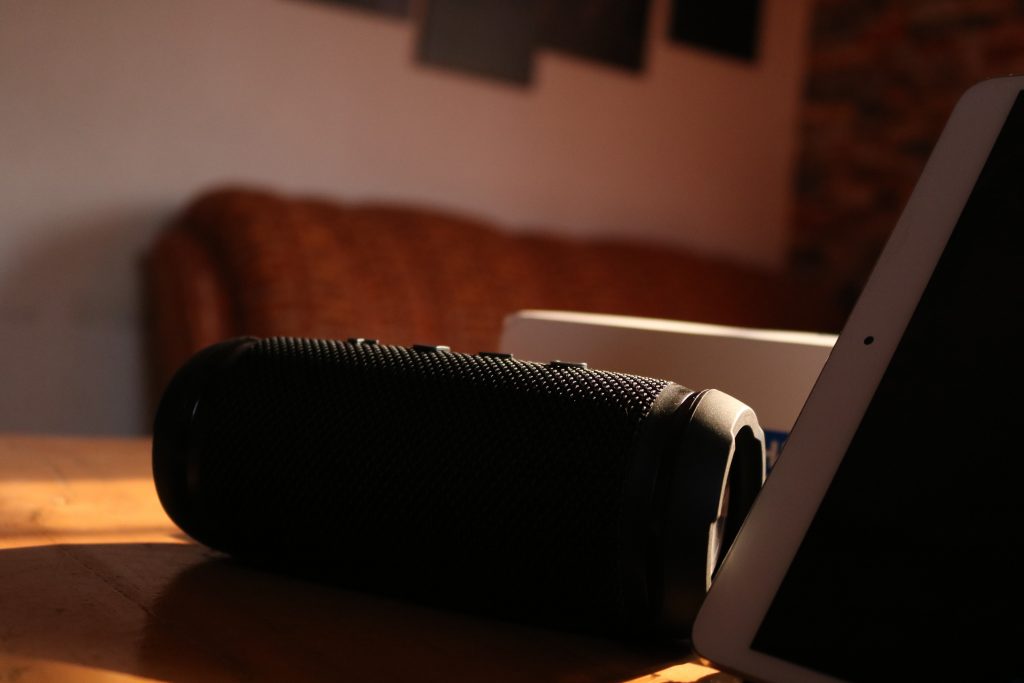 The Treblab HD7 is not a high-end Bluetooth speaker, and it can’t power large parties with its lacklustre bass response. It doesn’t even aim to. From the different points noted above in the review, it’s evident that the Treblab HD7 was made for a specific purpose: to give you great audio at sufficiently loud volumes for use in personal spaces, and still be portable enough for you to carry around without becoming an inconvenience. And it does this well, with its lightweight and portable build, and excellent reproduction of midrange and treble sounds. It also supports the True Wireless Stereo technology, meaning you can pair two Treblab HD7 speakers and play audio through both of them at once, giving you a stereo sound experience and better bass. If you’re really particular about the bass, you can check out the Treblab HD77, a larger version of the HD7 with a much better bass response and power output.

The Treblab HD7 is currently available for $59.99, and while this is already a good deal, it makes even more sense with a 15% discount generously provided by Treblab for my audience. You can get this discount by applying my coupon code, STEVEHD7 during checkout, either on Amazon or on Treblab’s official website. 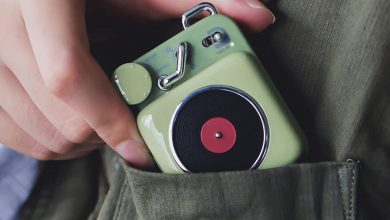 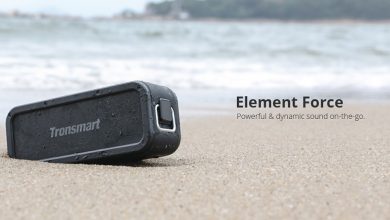 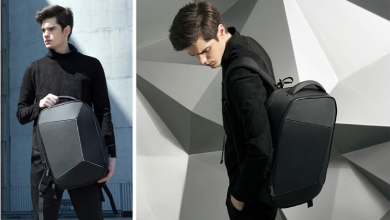 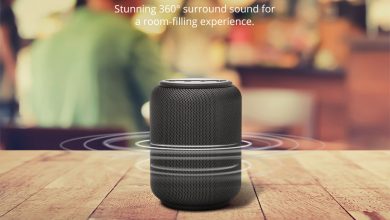