Teclast is gradually making a name in the Chinese as well as the international market by offering some budget-friendly and high-end hardware phablets around the globe. The company knows what to offer for a particular price, and unlike international brands, Teclast delivers what the world deserve under a stupendous price. Teclast has developed so much in these years that they are kindling a war with Microsoft. You already know about the famous Microsoft Surface series, right?. Well, instead of emptying our pockets, let’s save some dollars with a cheap alternative and our today’s protagonist ‘Teclast Tbook 16 Power’, the Chinese Microsoft Surface with almost the same design but three times lesser the price. We know that Microsoft has some promising hardware, and a name in the market and Teclast Tbook 16 Power can’t match the specs, but still, it’s worth of spending some bucks if you are more concerned with the design and build. As we said, it’s a cheap alternative.

What’s Inside the Box?

Teclast Tbook 16 Power comes inside a charming white box. There’s no product diagram illustrated in the box, only some highlights and Tbook is written on the front. It looks like, Teclast has kept the packaging plain and straightforward.

Speaking of the accessories, there’s no much to offer with Teclast. It comes with:

It’s pathetic that there’s no keyboard dock along the accessories. Well, like most of the tablets we have to buy it separately. But looking at the price of Tbook 16 Power, the keyboard dock should be given for free along the tablet

The true nature of Teclast Tbook 16 Power is delivered performance inside a sleek and elegant chassis. Although, the frames of the tablet molds from plastic but the rear is forged from some serious metal alloy called magnalium. In short, we have a plastic and metal housing undergone through the expensive and time-consuming CNC process. Even, the edges are slightly curved with the perfect finish to exaggerate its beauty further.

Tbook 16 Power is an entrant in the 12-inch category occupying an area of 30.30 x 17.95 cm and is ultra-slim at the same time with 1.00 cm of thickness. Because of the metal rear, Tbook 16 Power is also heavy (897 grams) for the user. Still, it’s lightweight when compared to the other 12-inch tablets on the list. Even, the hotshot Microsoft Surface Pro 1 & 2 are heavier and thicker than Teclast Tbook 16 Power. 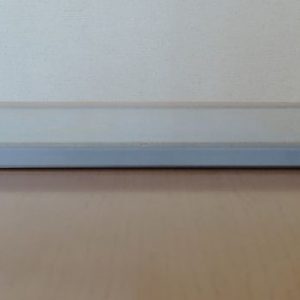 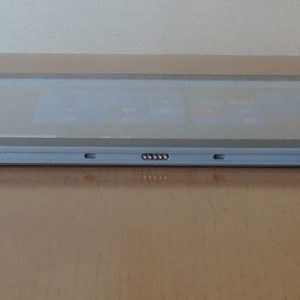 On the top, we have the power button and the volume bar which presses effortless, and there’s no ticking sound heard while pressing. The bottom features a five pin plug and plays connector on the keyboard.

Meanwhile, on the right side, we have two speakers which are an average. When played any audio, the speakers generate some loud and detailed sound, but like all other Chinese tablets, the sound starts to distort at full volume.  There are some ports on the left side which will be explained further in the connectivity section. 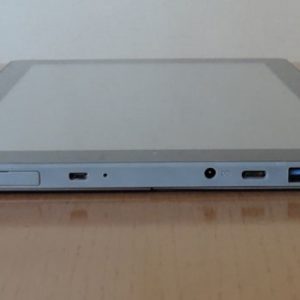 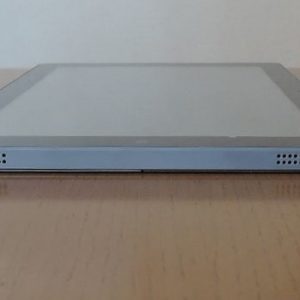 Now let’s head to the most exciting and premium side of the flagship which is the rear. As we said, the back is metal, so we better expect it to be tough. The rear camera and the kickstand are witnessed there. There’s a streak at the mid which separates the metal kickstand from the metal chassis. The kickstand is rotatable to 60 degrees. We wished that Teclast had made it a full 90 degrees.To sum up the whole section, we want to say that the design and the built are the best allowing Teclast Tbook 16 Power. 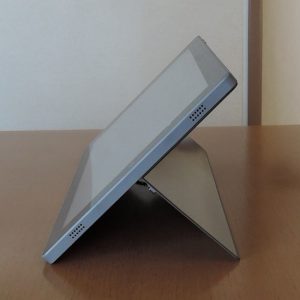 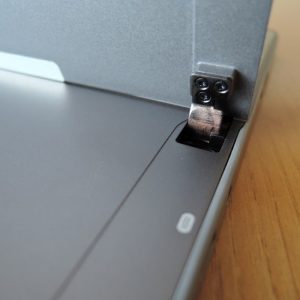 To sum up the whole section, we want to say that the design and the built are the best allowing Teclast Tbook 16 Power to be the best cheap alternative to Microsoft Surface Pro.

Teclast Tbook 16 Power is above $300, the large 11.6-inch screen featuring a Full-HD display is the reason for that price. The screen is huge so that we won’t see some great depth even on the Full-HD resolution because of the low pixel density around 190 ppi. But, the display yields some beautiful colors and high contrast. The viewing angles are superb as it’s IPS and capacitive sporting up to 10 points touch.

Now comes the cons, which is its brightness. The display panel is not bright enough (180 lumens) and under daylight, it reflects most of the light, even at maximum brightness. This is seriously annoying as we barely see anything on the screen while working under sunlight.

To be honest, the hardware of Tbook Pro is the selling point as well as one of the cons. Talking about the bad side is the processor which is Intel Atom x7-Z8750. Although, Atom x7 is not bad as it’s a 14nm Quad-Core processor with a 1.3GHz frequency featuring turbo boost up to 2.56GHz. But we can get better for a price around $350. Intel Gen 8 graphics can easily run any Android game but limited to Windows games like Dota 2, Warcraft. Indeed, you can’t play high graphics games like GTA 5, Witcher 3, etc.

The good side is the generous eight gigs of RAM that’s why this Tbook 16 model is called ‘POWER’. Not only this is more than enough for multitasking on Android but Windows as well. But, we feel a little bit pushed back because of the processor. One can get an M3 processor for a much lower price which is way better than X7. Still, the point is that you won’t have an 8GB RAM. We conducted a benchmark test on AnTuTu, and the laptop scored nearly 90000 points (89301 points). On Geekbench it scored around 1100 single core performance and 3223 in multi-core performance.

We have a 5MP rear camera with AF and 2MP front shooter, but like other Chinese tablets, the image quality of these cameras are worst. So, there isn’t anything interesting about them.

We have further divided connectivity into two categories: Wireless and Wired.

In the wireless section, Tbook features Bluetooth v4.0 and WiFi 802.11b/g/n. Meanwhile, in wired section, we have numerous ports including a DC port, 3.5mm audio port, standard USB 2.0, Mirco HDMI and MicroSD card slot. There’s also a USB Type-C port, but it should be noted that it doesn’t power any external HDDs.

Like we said at the start that we have to buy Tbook 16 Power’s metal alloy keyboard separately which is around $33. The keyboard is a mimic of Microsoft Surface Pro and appears to be appealing with nice keystrokes. But, the touchpad is shorter compared to that of Surface Pro. Plus, there’s a dedicated stylus, but it’s like wasting your money on that thing as it’s a basic one with no pressure levels. So, I guess it’s better not to buy that stylus.

Like most of the Teclast tablets, Teclast Tbook 16 Power runs on dual OS: Android 6.0 and Windows 10 (activated). Although, Android runs flawlessly with a high-end hardware and same is the case with Windows 10, but since the memory is limited especially for Windows 10, we might need to attach an External HDD or insert an SD card. While playing some Windows games, we experienced some glitches, but games like Dota 2 run smoothly with low settings. The icons appear to be large in Windows because of the low pixel density.

Mentioning the battery life, the manufacturer claims that this tablet has a battery life of 7 hours on average use and his claim is valid because of energy efficient processor it can easily run at least 5 hours and 7 hours (battery saving mode) on a massive 8500mAh built-in battery.

Teclast Tbook 16 Power is a powerful tablet with eight gigs of RAM. Still, it’s expensive with an Intel X7 processor. But, if you want a perfect Chinese alternative of Microsoft Surface Pro regarding quality and design Tbook 16 Power is the first on the line.

Attention: The internal data of table “176” is corrupted!

If you are interested in buying Teclast Tbook 16 Power can get it from Gearbest for the best price of $299.99 if using the coupon (code: 16power28). You can also buy its original keyboard dock for $33.88. Here’s the link to the store: 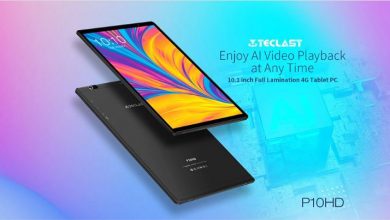 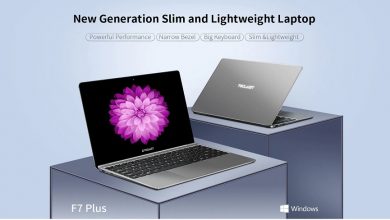