Teclast is known not only for its tablets but for ultra-affordable laptops as well. If you want a notebook that won’t cost you much but will bring acceptable performance, the F series models are what you are looking for. The latest model from this line is considered to be the Teclast F5R. Unlike many other notebooks from this family, our protagonist comes with a flip-and-fold design. This simply means the screen can be flipped at 360 degrees turning the laptop into a large-screen tablet. Agree this is a very useful feature for notebooks from this range. As for now, this product is discounted to $359.99.

The biggest selling point of the Teclast F5R is its appearance and functions coming from the form factor. Besides its thickness, this is a very lightweight laptop. In other words, you can take it with you anywhere you go. Simply put it into your backpack and go. It won’t make any inconvenience. Its unique design allows you to use it as a full-featured notebook or a large-screen tablet. Hinge at any angle you want and use in the way you prefer.

Its 11.6-inch screen with an IPS technology and Full HD resolution provide outstanding viewing experience. This display is also touchable and supports the stylus. But this is not the only highlight of the Teclast F5R. In a 13mm thin and 1kg light body, the manufacturer put quite powerful hardware. We are not saying the processor it is packed with has no equals. No, but it is sufficient for the most daily tasks and office works.

Under the hood, the Teclast F5R sports an Intel Apollo Lake N3450 quad-core chip clocked at 1.1GHz (max 2.2GHz). You may think it is an outdated chip. But the truth is the N3450 has been appeared on myriads of similar laptops and proven its stable performance for uncounted times. This SoC is coupled with an 8GB memory and a 256GB SSD storage. There is also M2 slot for storage expansion.

The next two selling points of the Teclast F5R are the long lasting battery and the connectivity. If the latter is more or less expected, the battery inside provides up to 5 hours of video playback. It can be also quickly charged through the USB Type-C interface. Finally, apart from the traditional/wired connectivity options, this laptop supports dual-band WiFi for a more stable wireless connectivity. 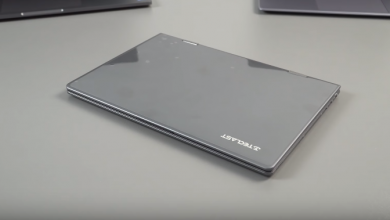 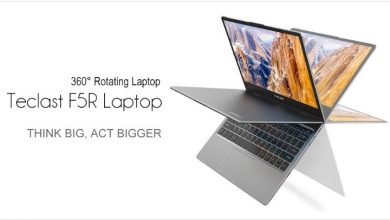