One of the devices that is about to reach the market is the first mobile of the new consolidated brand Redmi, since a few days ago it was announced that this series of the giant Xiaomi would become a completely independent brand, and at the same time, it was said that they would be working on their first mobile device. Since then the speculations have not been lacking with respect to this terminal. One of the most important features of this device, the camera, is newsworthy today.

Also Read: The Xiaomi Mi A2 can finally be freely acquired in India

Recently, the CEO of the company presented some new images with respect to this phone, giving a little more information about this Smartphone, things like its specifications or the possible price that it could have. Now Donovan Sung (@donovansung), Xiaomi’s global representative, revealed new teasers from the powerful 48MP camera of this mobile. Of course, previously we had already talked about the possibility of a double camera configuration, and with this teaser, that information is backed up since we can appreciate that configuration in a vertical distribution along with an LED flash. However, there are things that are still unknown such as the name with which this terminal will be presented.

Possible features of the Redmi mobile

A few days ago, Xiaomi’s CEO Lei Jun, released some new information on this terminal, and today has made a new publication in which he tells fans to stop worrying about the specifications of this mobile because he ensures that it is made to dominate the market due to its incredible value for money. Of the information that is known but not clear, it is said that this mobile will have a Qualcomm processor; however, it is not known what it will be, whether it will be a Snapdragon 660, Snapdragon 670, Snapdragon 675 or Snapdragon 710. 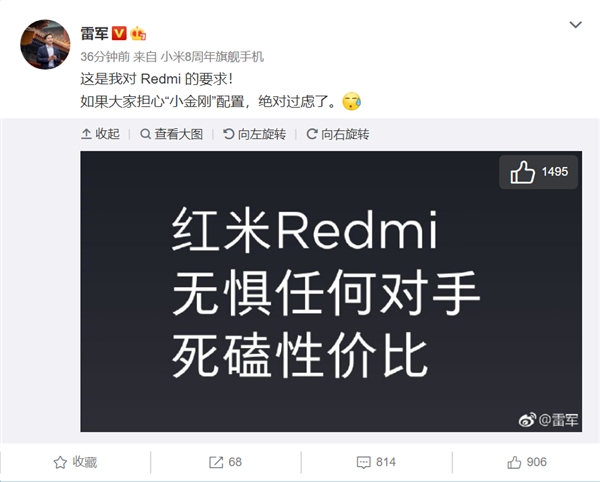 The rest of the specifications that are known from a series of leaks are a screen with a waterdrop notch and dimensions of 6.3″, counting with a 2.5D double-sided glass. Its construction has a gradient design. Along with this, it has a 3900mAh battery. Lei Jun says fans will not be disappointed.