The Chinese tech manufacturer Realme is now all set to expose its first 5G handset, the Realme X50. As per the official indications, the 5G smartphone may hit the launchpad any time before the Chinese Spring Festival on January 25. However, the manufacturer has not revealed the exact launch date, but it is being rumored to fall before January 25.

The Realme Product Manager Wang Derek took it to Weibo to announce that the Realme X50 5G smartphone will come before the Spring Festival. Furthermore, some users on Weibo also asked the manager whether the upcoming 5G handset will configure the 120 Hz display.

In response to this query, Derek wrote, “if so, would you buy it?” Hence, his answer still leaves the doubts alive about the 120 Hz display implementation. Well, the device seems to fall in the mid-range segment, so we can’t hope for the 120 Hz screen to come.

Moreover, Realme has already arranged for an event in India on December 17 to unveil its Realme X2 along with its first truly wireless earbuds, the Realme Buds Air. Therefore, in connection with this launch event in India, most probably, Realme will expose the X50 5G smartphone in the starting of next year.

In terms of confirmed specs of the Realme X50, it will come with the latest Snapdragon 765G processor. On the front, it will host a 6.44” AMOLED display. The storage slots are likely to fill with the 8GB and 256GB memory. Similarly, the photography circuit of the phone is expected to host a quad-cam rear module, consisting of a SONY IMX586 64MP primary sensor accompanied by the 8MP + 2MP + 2MP sensors as well. The 32MP+8MP sensors will occupy the punch-hole in the pill-shape. Its battery may be of 4500 mAh capacity with VOOC 4.0 Fast Charge. 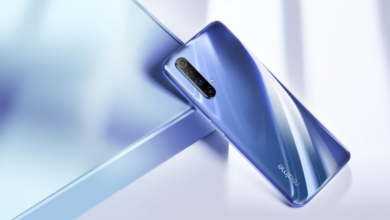