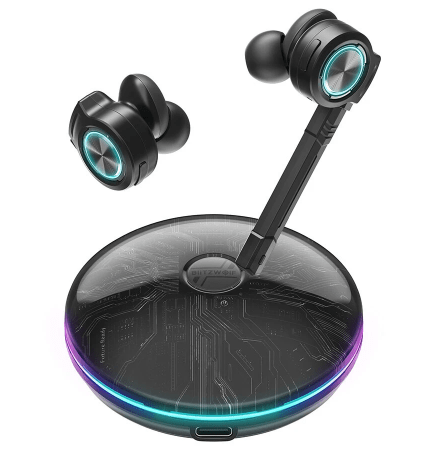 Halfway through the end of last year, a similar BlitzWolf device came out, then the BW-FLB2 came on the market, and now it is followed by the latest BlitzWolf BW-FLB3, which is much more extravagant and unique enough to get our heads on. The low-latency earpiece has become quite an exciting concept in both its technical parameters and design. Sales are only just beginning, the earpiece can be pre-ordered for the time being.

With the BlitzWolf BW-FLB3 , we managed to achieve even less delay time than the previous model, so it is only 4 ms , which our brains can no longer comprehend, so we can have a perfect gaming experience while the sound reaches our ears wirelessly. This is due, among other things, to the Bluetooth 5.0 standard through which the widget communicates with devices. During the game, the players also like to talk to each other, so it wasn’t a smooth microphone , but a longer piece to get better sound quality. However, you can unplug this at any time so you don’t bother when you don’t need it.

There is a separate game and music mode , which we can switch between with the touch buttons . Probably the bass is stronger in the former mode of use than in the other. The BlitzWolf BW-FLB3 earbuds have a 55 mAh battery that lasts up to 5 hours , but an additional 500 mAh battery has been built into the charging cradle . If you want to charge, you can do it from 0 to 100% in an hour and a half via the Type-C port . The great interest of the charging cradle is the design. On the one hand, the shape reminiscent of a duck stone is not common, but the surrounding RGB LED mostly unusual. It’s a matter of taste to whom it comes in or not, but I think it’s a more interesting piece within the gamer world as well, I wouldn’t call it restrained at all.