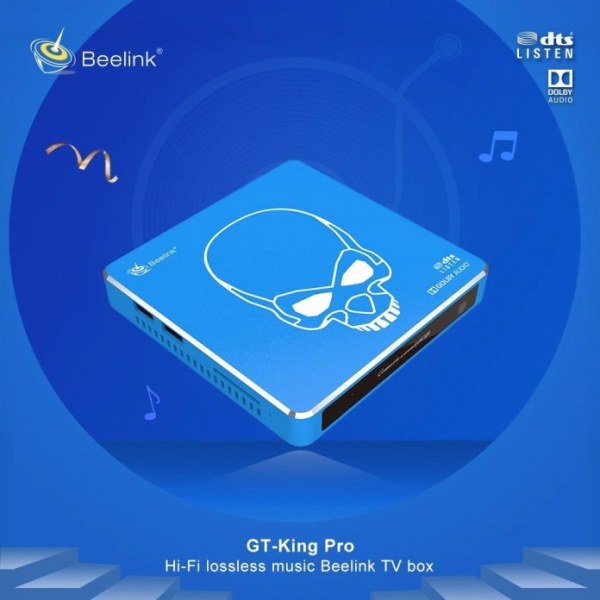 There are many types of Tv Box. There are the TV Boxes “bakakis” that are honest, but with few possibilities. The boxes “Warda” are expensive, but you do not know why. Of course, the TV boxes “Valbouena” which because everyone knows how good they are, are accurate.

On top of all that is the Beelink GT King Pro, a mix of Cristiano Ronaldo and Chuck Norris.
At the heart of the GT King is the brand new six-core Amlogic S922X, which please has Cortex A73 cores.

The graphics are taken over by the quite powerful and six-core Mali G52 Mp6, while in the field of memory, you will find 4GB LPDDR4X RAM and 64GB ROM.

The Beelink box can display HDR content as long as your TV supports it, and it does not chew even in 4K content playback at 75FPS.

The Beeling GT King’s connectivity is EXCELLENT since you will find both Dual Band 2.4 / 5.8G WiFi and Gigabit Ethernet, with Beelink having added 2 USB 3.0 ports, a USB 2.0, a Card Reader, Bluetooth 4.1, and of course the HDMI 2.1 port. In all the above, Bonus is a serial RS232 port, which I have no idea what it does!

King runs Android 9.0, which God helped us, and it is not Android TV that does not even have the default Browser but a regular version of Android 9.0.

In fact, in the package, you will find a MicroSD card with preloaded OpenELEC, a Linux distribution, especially for Media Players, so you can Dual Boot the machine.

The sound that the Beelink GT-King Pro makes is also excellent since it has two HiFi Decoding Chips and 2 Op-amp chips, which I know very well what they do, but I’m not telling you to be anxious.

In the package, you will find wireless control, which connects to 2.4G for a range of almost 10 meters, while it also supports voice commands.

The Beelink GT-King Pro normally costs around € 150, but in the Super Deal of Banggood, you can get it for just € 120.5 final price!

If you are bored with mediocre boxes that one stick and the other is forced, do yourself a favor, and give the good money to get this little beast and do your job. Kings. Did you catch it? “GT-King Pro”, “kings,” eh? ?? no;

Back to top button
Close
Close