Xiaomi has different sub-brands and one of them is POCOPHONE, they have created their first phone called POCOPHONE F1, rumors say that this new sub-brand is the one that would be in charge of manufacturing low-end terminals.

A few weeks ago the POCOPHONE F1 received the NCC certification from Taiwan and the certification from the Federal Communications Commission (FCC), at the same time, the new smartphone is on the list of Xiaomi devices certified by the ECC. In addition, today it obtained its Bluetooth certification. 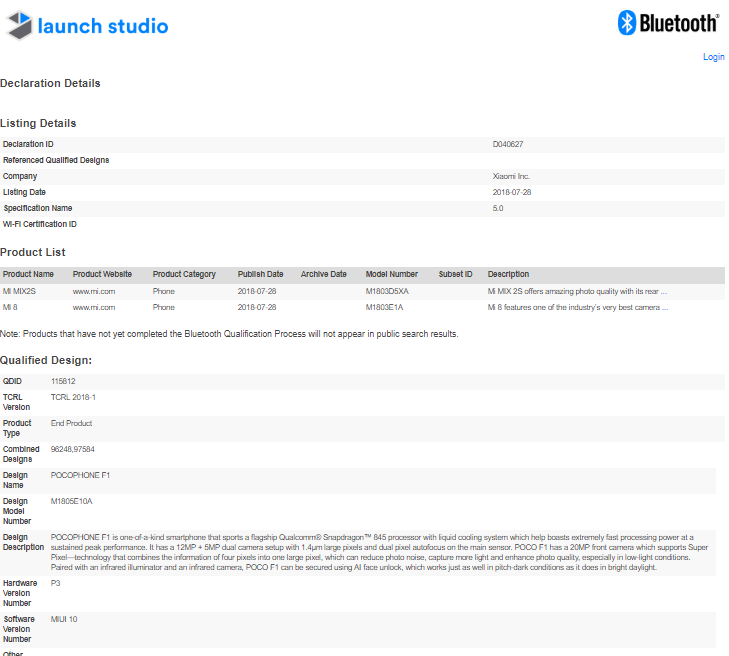 The page where it shows the Bluetooth certification confirmed that the model code of the Smartphone is M1805E10A, this page not only revealed this information but also showed a number of interesting details about the POCOPHONE. Everyone wonders what would be the processor that will be powering the terminal, and today it is known that it will be working with a Qualcomm Snapdragon 845 processor.

It is stated that this device has a dual main camera of 12MP + 5MP. The main sensor of the camera has a large pixel size of 1.4um and double pixel autofocus, which can guarantee great photos. However, the configuration of the camera is still lower than that of the Mi 8 that has dual cameras of 12MP + 12MP.  The front camera will be equipped with a sensor of 20MP featuring SuperPixel technology.

SuperPixel is a technology that combines details of four different pixels in a single large one, as a result, the images taken will have a better quality. It will also provide good photos in low light conditions.

The phone has an infrared light and an infrared camera for identification and facial unlocking, which is the same method of unlocking used in the Xiaomi Mi 8, this infrared illuminator next to the sensor will unlock the device in low light environments.

An official video confirmed that the F1 Pocophone will be first class, as well as confirming the use of the MIUI 10 customization layer and not MIUI 9 as previously rumored.

The Federal Communications Commission documents indicate that the Pocophone F1 will sport 6GB of RAM with variants of 64GB and 128GB of storage memory, and is expected to be one of the most affordable devices for those using the Qualcomm Snapdragon 845 processor.

However, according to Roland Quandt, a well-known WinFuture analyst, a distributor in Eastern Europe would have the device priced for less than $390 (26.763 INR), which is an incredibly attractive price for a smartphone with a Snapdragon 845 processor.

Read more: The new update of the Xiaomi Mi 8 is removed due to a bug

Homtom HT70: A mid-range Smartphone with a 10000mAh battery