OnePlus 6 is the latest flagship of OnePlus, it was Released on May 22nd following the earlier OnePlus 5T model. From the name of the two smartphones, it crystal clear that the OnePlus 6 is a major upgrade to the previous one. So let’s take a close look at the two phones side by side and see what has changed and possibly give you an insight on which of the device to buy.

Both smartphones sport large HD screens which makes them fall neatly into the phablet category. The OnePlus 5T comes with a 6.01 inch 1080 x 2160 display while the OnePlus 6 takes things a bit further with its 6.28 inches featuring 1080 x 2280 pixels. Both phones have taken the effort to protect their beautiful screens with Corning Gorilla Glass 5.

Talking about the design, the OnePlus 6 comes with a shiny bezel-less look and even adopts the infamous notch, made popular by the iPhone X. The OnePlus 5T, on the other hand, sports a more traditional look with thicker bezels at the bottom and the top.

The OnePlus 6 comes with the latest and most powerful Octa Core Snapdragon 845 at its base clocked at 2.8 GHz while the 5T sports a strong predecessor — the 2.45 GHz Octa Core Qualcomm MSM8998 Snapdragon 835. Both processors provide a good base for multitasking and working with a variety of apps, but the newer OnePlus 6 offers the ultimately smooth experience. Both phones come with the same amount of RAM and internal storage: 8GB RAM + 128GB ROM.

The OnePlus 6 is better equipped for gaming — not only because of the faster processor but also thanks to the upgraded Adreno 630 GPU (the 5T features Adreno 540). This means that you will get to try out all the latest game releases with no lagging. As one might expect, the OnePlus 6 comes with the later version of the operating system as well — Android 8.1 while the 5T runs on the earlier Android, v7.1.1. The latest OS gives you access to a number of performance upgrades by itself and no app from the Play Store will be out of your reach.

When it comes to these two aspects, the phones are absolutely the same. Both the OnePlus 6 and the OnePlus 5T are powered by the 3300 mAh, Li-Po battery, which provides enough juice and helps avoid frequent re-charging. Both phones come with a nice camera set-up. You get a 16MP front shooter for high-quality selfies and dual 20MP+16MP cameras equipped with autofocus on the back.

Read also: 10 Xiaomi Product That Would Transform Your Home For Good

One of the most interesting upgrades on the OnePlus 6 is the Face Unlock feature, which uses the phone’s front camera to provide an extra level of security — just like on the very latest international flagships like the iPhone X. The OnePlus also promises to be protected against the elements — namely, to be rain-proof. This does not mean that you will be able to take the phone swimming but, at least, you won’t have to worry about it being caught in the rain.

With all said, lets quickly sum up the difference and similarities in the picture below, 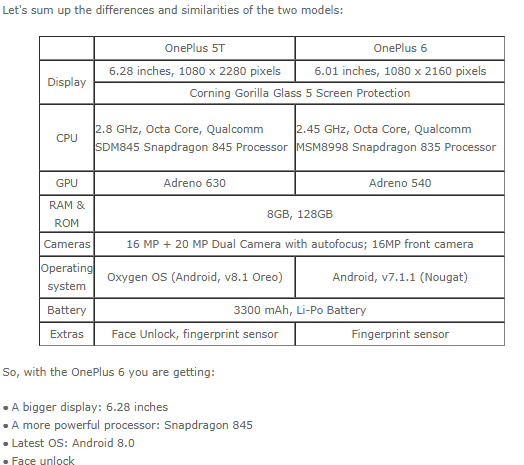 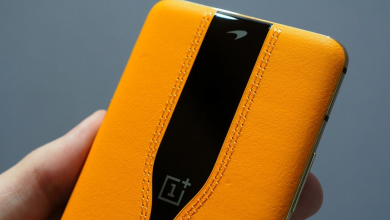 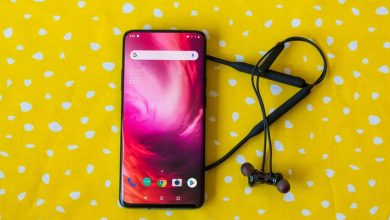