We all are praising the Xiaomi Mi Laser Projector because it was one of the firsts to bring a 150-inch Full HD resolution image projecting to the larger masses at 5 times less price tag than what had been offered in the market. As we know, the Japanese manufacturer had been leaders for a while. But now they are out of the competition. Of course, Xiaomi is not the only top brand to come in with such a product. Recently, the Korean LG introduced another rival to this product named the HU80KA that supports 4K and comes with a maximum brightness of 2500 lumens. It was priced at around $2000. Another interesting model was introduced by Hisense, but it was priced over $10000. Thus the most affordable short-throw projector still remains the Xiaomi’s representative. But a new projector with almost identical features is already available for purchase in face of the JMGO J6S. It is priced at $840 regularly, but you can get your hands on it for only $649.99.

Actually, there are many key features making this laser projector stand out. First, it comes with a maximum brightness of 1100 ANSI lumens. Many may think it is not sufficient, but this brightness allows the projector to view the content in the daytime without drawing the curtains. Plus, it enhances the clarity and smoothness of the projection images.

Thanks to a compact and well-thought design, you can put it in various positions and at various places. So the images can be projected on various surfaces such as walls and ceilings. The JMGO J6S supports horizontal and vertical keystone correction as well as autofocus options.

As for hardware, there is an Amlogic quad-core chip paired with a 2GB of RAM and 16GB of eMMC flash storage. It also comes with a built-in speaker. And as this laser projector also supports Bluetooth and dual-band WiFI connectivity you can use it as a speaker as well. By the way, these connectivity features also allow you project images via your phone. The latter can be used to control the projector in a more convenient way. At last, there are plenty of interfaces including a USB 3.0, a USB 2.0, HDMI, S/PDIF, Ethernet ports, and a headphone jack.

OnePlus 6T With the Fastest Screen Fingerprint at $419.99 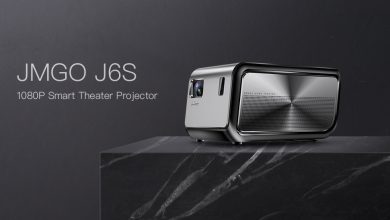