Many think tablets are past-style electronic products because at present the use of tablets is drastically reduced. In most cases, a smartphone is completely able to replace the tablet. Plus, they are more convenient to carry. At the same time, according to the data given by IDC, the sales volume of the global tablet market is declining. Even the iPad is seeing poor sales performance. Apple can’t stop the trend and has been forced to launch the iPad Pro to increase the profit. However, there are some Chinese brands that are struggling in this niche like grim death. Huawei is among them. One of the main advantages of Huawei tablets is the audio-visual aspect. Thus, its tables are aiming at media and entertainment. It’s believed, these features will expand the customers’ circle and affect the sales growth. The Huawei MediaPad M5 is not a rookie. Though it’s the latest model of Huawei, this tablet released a few months back. It comes with a 2K resolution screen and a Harman Kardon speaker. So we believe it can provide outstanding video and audio performance. Below we’ll try to find out whether it is so.

Actually, there are three variants – 8.4-inch, 10.8-inch, and Pro. We’ll review the latter in a few days.  The 10.8-inch and Pro variants of the Huawei MediaPad M5 can use a docking keyboard. At the same time, the Pro version also supports Huawei M-Pen stylus.

However, we are reviewing the lower model, which comes with an 8.4-inch display. Thus, it neither supports a stylus nor a docking keyboard. It’s a classic tablet unlike the other two that can be considered as tablet PCs.

The packaging doesn’t stand out. It’s simple, carrying all the necessary information.

As we said, the Huawei MediaPad M5 comes with an 8.4-inch IPS high-definition screen with a resolution of 2K and a pixel density of 359PPI. The frame around the screen is narrowed a lot. The screen ratio is 82%. It’s a good indicator for a tablet.

In terms of perception, the Huawei MediaPad M5 also uses Huawei’s own ClariVu display enhancement algorithm, which can improve the dynamic range, contrast, sharpness and color saturation of the screen by nearly 20%.

It is worth mentioning that the Huawei MediaPad M5 is the first tablet equipped with a 2.5D curved glass display, which greatly enhances the visual experience.

The front camera is placed on the forehead. There is also the Huawei logo in the left corner.

Below the screen, we can find a non-pressable Home button, which also integrates a fingerprint identification.

The back of the Huawei MediaPad M5 adopts a quad-curved all-metal integrated body.

Though we are dealing with a tablet, it’s still very portable due to a weight of 316 grams and a thickness of 7.3mm. So you can pick it with one hand and make operations easily.

The antenna of the Huawei M5 tablet uses a nano-injection technology and a U-shaped design.

As we see, besides the Huawei logo and the camera, there is also the Harman Kardon logo.

The stereo speakers from this manufacturer are placed on top and bottom sides. The volume is significantly improved compared to phones. By the way, the 10.8-inch and Pro versions are innovatively equipped with four stereo speakers, with smart power amplifier chips.

On the bottom, we can also find a USB Type-C interface and a microphone hole.

The power button and the volume button are on the right side.

The SIM card slot is placed on the left. It supports dual-SIM connectivity.

The box also includes a transparent protective case and an 18W charging head.

The Huawei MediaPad M5 is equipped with a Kirin 960 octa-core chip and a 4GB of RAM. The manufacturer claims the performance of this tablet has reached the level of an ordinary flagship phone.

On the network side, the M5 supports 5G Wi-Fi (802.11ac) as well as a 4G connectivity. Even if it is out of the wireless network, it can use the SIM card to access the Internet.

This feature is used to control the computer. The difference is that you don’t need to connect to other computers. It is undoubtedly the most convenient for users who travel frequently.

As for gaming, the Huawei MediaPad M5 can be used to play almost any heavy game. The octa-core processor provides a smooth experience, while the big screen brings a broader view of the game.

As we said at the beginning, this tablet comes with Harman Karbon audio hardware. At the same time, in terms of software, it uses HUAWEI Histen technology. That’s why the Huawei MediaPad M5 provides way better sound experience than many smartphones. The upper and lower design speakers have 3D surround effect.

At last, there is a back camera with a resolution of 13MP and supporting autofocus, while the front-facing 8MP camera comes with fixed focus.

Under the hood, we can find a 5100mAh battery. For tablets, the most power-consuming component is the screen. And when taking into consideration the 2K resolution screen of the MediaPad M5, there is every reason to think this battery is insufficient for a daily use. But on the other hand, the tablet runs on Android 8.0 (EMUI 8.0), which comes with an enhanced power-saving optimization.

As for gaming, the test began when the remaining power was 75%. After 30 minutes of playing a game, the power dropped to 65%.

The Huawei MediaPad M5 comes with a standard 9V2A 18W fast charging head. We tested the charging process, starting at 5% and recorded the results every 10 minutes.

The Huawei M5 tablet comes standard with a 9V2A 18W fast charging head. It starts charging from 5%, connects to Wi-Fi, does not insert the card, and records it once every 10 minutes. It fully charged in 100 minutes.

Many manufacturers are refusing their plans on making new tablets because of pessimistic statistics. But Huawei and Xiaomi continue coming in with new models. Just recently, the Mi Pad 4 released. And we have to say both models are very good Android tablets. Besides the fact they can compete with the iPad successfully, they can provide great performance. We recalled the Xiaomi tablet because both manufacturers focus on audio/video experience and game performance. 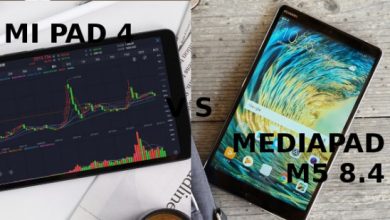