Amazfit GTR vs Huawei Watch GT – When tech giants determine to provide the best possible product in the market, true innovation happens. And when it’s the bosses of the tech market itself – Huawei vs Xiaomi – it’s no doubt that the products you buy will provide value for every penny. The latest addition to their battle is the Huami Amazfit GTR vs Huawei Watch GT – but which one should you get and why?

When it comes to design, neither of the watches let down at any point. Between the Huawei Watch GT vs the Amazfit GTR, both watches look extremely classy and professional, even if they serve the purpose of being the perfect smartwatch and fitness tracker. They both sport elegant round dials with many strap options and definitely look premium on the wrist; the GTR does have more options, though. Both watches feature a ceramic bezel design around a much-appreciated AMOLED display, with a stainless steel shell. The Huawei Watch GT display is protected by a DLC coating, while on the Amazfit GTR, we get a Corning Gorilla Reinforced Glass with anti-fingerprint coating. Both watches also feature a double crown that adds to their first-class look. The difference, however, lies in the size variants of the two watches, which we will talk about later.

The resolution of the display on the Huawei Watch GT and the Amazfit GTR (47mm version) is the same at 454×454 pixels. In my personal opinion, I would say the brown and black straps on both of these watches look the best if you’re going for a more professional feel.

All in all, the competition is definitely neck to neck. It’s hard to declare a winner at this stage because both watches come with excellent designs, especially at their prices. There are no major differences between these designs either, which makes it hard to choose between the two. However, the Amazfit GTR might just be in the lead due to two dial size variants.

Huami’s Amazfit provides two choices for the GTR. One is a bigger sized 47 mm dial, and the other is a smaller 42mm option. This latter option does seem compromised due to its size, especially when compared to the GTR 47mm. It has a lower 360×360 resolution. And the resolution is not the only thing that was exchanged for a smaller size. Still, the Amazfit GTR definitely wins this segment of the race, especially for women or people who like smaller dials.

What about specs and performance?

Since the first criteria didn’t help out all that much, let’s look at the second segment of the race: the performance, and what these watches pack.

The Huawei Watch GT is equipped with Bluetooth 4.2, and also supports a 3 Satellite Positioning System (GPS + GLONASS + GALILEO), making it useful for outdoor usage, especially in the absence of a phone. It does not, however, support wi-fi, so it cannot show you call, message, and app notifications without a phone that it is paired to. Your phone must run 4.4 or later, or iOS 9.0 or later to be compatible with the watch. The Huawei Watch GT is also waterproof with a 5 ATM rating, which is more than enough for daily usage. The watch lasts for up to 2 weeks on a single charge, depending upon your usage, which is pretty impressive and will definitely keep you worry-free about have to charge it too frequently. Overall, the watch is aptly optimized for outdoor usage and daily wear.

On the other hand, the Amazfit GTR also packs a lot of features. It has Bluetooth 5.0, which is a step up versus the Huawei GT. It also supports GPS + GLONASS, which apparently allows for more accurate GPS data. When it comes to battery life, the two variants of the Amazfit GTR differ. Due to its smaller size, the 42mm version packs a smaller battery that lasts up to 12 days, which is still decent. The 47mm, however, can power up to 24 days, which is significantly better than both the 42mm version as well as the Huawei Watch GT. On Android, the Amazfit GTR supports versions 5.0 or above, whereas, on iOS, it supports versions 10.0 or above. The GTR, too, has a water-resistance rating of 5 ATM.

It seems that in this race between the Huami Amazfit GTR vs Huawei Watch GT, the latter is definitely taking lead. It has a significantly better battery life, and slightly better Bluetooth connectivity, even if the Huawei GT has a better GPS. Do we have a winner yet?

How do they measure as fitness watches? – Huami Amazfit GTR vs Huawei Watch GT

The primary usage of most smartwatches is definitely fitness tracking. Tech giants are racing to develop newer and more accurate fitness measuring devices that can encompass all data relating to your body and display it on your wrist. The Huawei Watch GT and the Amazfit GTR surely do live up to this with their many sensors and modes.

The Huawei GT has smart fitness training in the form of StayFit, which provides introductory or advanced coaching for running and gives you real-time feedback and guidance. It also has three sports modes: cycling, swimming, and mountaineering. The watch has an accelerometer to measure speed, a gyroscope and a magnetometer, a barometer and also an ambient light sensor to adjust the display’s brightness.

The Amazfit GTR does not lack behind. It packs an impressive array of 12 sports modes with options like indoor or outdoor running, walking, skiing, work out, swimming, and mountaineering. A 6-axis Accelerometer, a 3-axial Geomagnetic Sensor, and Capacitive Sensors are what enable the watch to carry out many functions. It can also monitor Ambient Light and Air Pressures.

This is where the competition gets tough. While the Amazfit GTR does provide more sports modes, the Huawei GT packs the StayFit technology for real-time training. However, this training only comes for running as of now. Otherwise, both watches provide nearly all the same features such as heart rate monitoring and sleep monitoring.

Also Read, Huami Amazfit GTR vs Verge 2: Which smartwatch should you buy?

On the Huawei Watch GT, we get Huawei TruSeen 3.0 real-time heart rate monitoring technology, which is a must-have in today’s smartwatches. This technology enhances the precision of this monitoring, and the watch can be used to monitor heart rates all day long. The Huawei TruSleep 2.0 technology in the watch also helps the watch monitor sleeping patterns and identify sleep-related issues.

The Amazfit GTR watch is equipped with BioTracking PPG optical sensors and Huami’s own algorithm for accurate heartrate monitoring. This precise monitoring can be used for the entire day, and it also supports screening for arrhythmia, which can come in very handy. During the day, the Amazfit GTR is excellent at recording your walk count, and at night, it accurately records sleep data.

Considering all things, the Huami Amazfit GTR does seem to the first to cross the end line, but not by a large margin. It did stand up to the test in all the categories mentioned above, but the Huawei GT was not far behind. The fact that the Amazfit GTR provides two variants is perhaps the only thing that gives it a true edge over the Huawei Watch GT.

Anyways we hope that you liked our comparison on the Huami Amazfit GTR vs Huawei Watch GT. Do leave your views and thoughts on the comment section below. Also, currently you can purchase the Amazfit GTR on a FLASH SALE for just $149.99.

Also Read, Amazfit Verge Lite Review: Is it Worth Buying?

Jumper EzBook X3, an elegant laptop with an impressive 33% discount 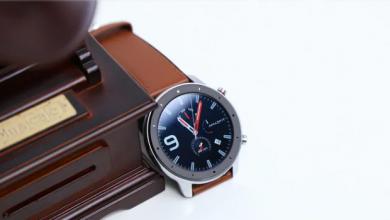