The Creality CR-10 has won hearts of the 3D printing community. It’s considered to be one of the latest affordable 3D printers. Though this product has been released back in 2016, only this year it became very popular. Inspired by its success many manufacturers are currently making 3D printers similar to the CR-10. We know the imitation is the sincerest form of flattery. Thus Creality has designed a great 3D printer. Before we get into details and find out what makes this printer unique, you should know it’s got a price cut and now it’s available for $325.99 after applying the coupon (code: GBCR1023). Thus you are able to get your hands on the CR-10 for an $80 discounted price tag.

In terms of appearance, the Creality CR-10 doesn’t use anything complicated. There’s a stark simplicity to it. This 3D printer comes with myriads of black-coated aluminum rails and a plain 300 x 300mm glass print bed. There even larger versions with print areas of 400mm- and 500mm- cubed. However, though it uses a slender frame, the Creality CR-10 is a big 3D printer. This statement refers not only to its large build volume but also the space it occupies.

Generally, the selling point of the Creality CR-10 is its enormous print area. It is even larger than the Lulzbot Taz 6, MakerBot Replicator+, and Zortax M300 that are known for their large print volumes. That’s why the company rates it as an industrial 3D printer. It provides up to 200 hours continuous operation. As for key features, the Creality CR-10 comes with a 0.4mm nozzle at a maximum resolution of 100 microns. There is also a heated bed spreading the heat across the glass print surface.

We know there are many expensive and top brand 3D printers running on own-developed software. But it’s a headache to learn those programs and use their capabilities wholly. In this sense, the Creality CR-10 is more a blunt tool than a complete 3D printer. The software used in it has the simplest UI, which is another selling point of such ‘cheap’ and open-ended 3D printer.

At last, the CR-10 has been made by Shenzen Creality 3D Technology, which is considered to be one of the most transparent producers of 3D printers. It has been founded in 2014, but already managed to have ties with multiple Chinese universities. The Creality CR10 was launched in the summer of 2016 becoming the enhanced variant of the CR-7 and CR-8. Though it looks like the aforementioned 3D printers, there is a full frame for stabilization. The control box has been removed to avoid overheating the printer’s control board.

As you see, the Creality CR-10 truly lives up to the internet hype that it has generated. This is one of the best 3D printers you can acquire under $400.

Xiaomi Amazfit Stratos smartwatch($171) vs. Amazfit Pace smartwatch(153): Which should you purchase? 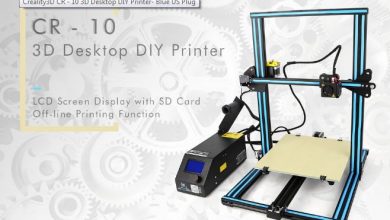