As global warming is raising the need for an Electric Heater can be felt by many of us. The year of 2019 has already been one of the coldest year and Eastern United States, and parts of Central and Eastern Canada are a perfect example of it. To curb with these extreme winters space heaters can prove to be an ideal device. Generally, Space heaters are portable devices which can be used for heating a single room or an area of the house. As technology is progressing there are new heaters in the market which are not only smart but also save a lot of electricity than conventional heaters. This article is also about an intelligent device from Xiaomi the Xiaomi Smartmi Electric Heater. The latest heater comes with Touch screen control, temperature reminder, no light pollution, heat insulation and much more. To know more about the device, keep reading!

The Xiaomi Smartmi Electric Heater arrives as a novelty has become the first device in the Mijia ecosystem for everyday life. Being a smart device the heater can be managed through a smart application from the smartphone or through voice commands from Xiaomi intelligent speakers.

The Xiaomi Smartmi Electric Heater is equipped with a user-friendly touch screen which makes it even more comfortable to use. Also, the device comes with three degrees of illumination which displays the basic information including the value to set heating temperature (set in the range from 16 to 32 °C) and humidity in the room. Design wise the Xiaomi Smartmi Electric Heater has a body with a thickness of 9 cm, and weights merely 6.4 kg which makes it easy to move around the room. Moreover being a smart device, it comes with its protection system to make sure you are safe in any case of a mishap. The device automatically disconnects itself from the network when heating any part of the device go above 95°C or when the case is tilted more than 45°.

As the name suggests, the Xiaomi Smartmi Electric Heater has the ability to heat up the interior of your home, by changing the density of air from cold to hot. The device differs a lot from conventional similar but somewhat old-fashioned radiation-based products. Also, the device has a temperature regulator as well as a constant temperature function. The latter will be beneficial for tackling under heated areas. For making its cost of operation low, the heater also works in energy-saving mode.

Overall the Xiaomi Smartmi Electric Heater is an excellent device to protect yourself and your family from cold weather. Advantages of the device include its low noise (28-29 decibels) while working, which will not bother you even in the nighttime. The heater weighs only 6.1KG with all the installed brackets, with slim with convenient inner handles on both sides of the body, you can move it without efforts. Finally, Xiaomi Smartmi Electric Heater also comes with IPX4 anti-splash protection which increases the safety with the device. However, for safety reasons, we do not recommend using electric heaters in the bathroom.

The Xiaomi Smartmi Electric Heater is available on gearbest for just $158.67. 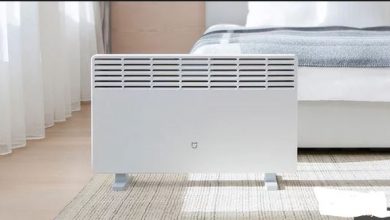 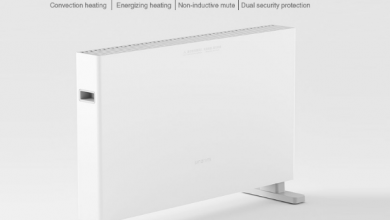