Doogee is an upcoming Chinese OEM that not only releases mobile devices for the high-end category, but also caters to the remaining segments as well. Let us take a look at the company’s latest mid-ranged offering, Doogee X5 Pro, and see how it fares in our review.

Coming to design of Doogee X5 Pro, the handset looks terrific from the front and back, despite the fact that it features a plastic encasing surrounding its 5 inch screen. While the following difference will be considered as an insignificant one, Doogee has incorporated a microUSB charging port at the top of the smartphone, making it easier for users to charge their handsets while using it in unison. Another thing to notice here is that there is sufficient gap between the charging port and the 3.5mm headphone jack, and we are confident that it will not provide any obstruction when you have plugged in both openings simultaneously.

As for the display of the smartphone, Doogee X5 Pro might not sport a 1080p resolution, but its 1280 by 720 one still makes up to provide one of the most vibrant displays that you will ever come across from a budget handset. We were hoping to see a resolution measuring at 1920 by 1080 pixels, but we cannot have everything we want.

Now as you all know, Doogee X5 Pro is an upgraded version of the original Doogee X5, which only means that you will get to see slightly improved hardware as far as this model is concerned. The chipset present underneath the hood is an MT6735, which is running four Cortex-A53 cores at a speed of 1.0GHz. Though we have liked to see a higher clock speed, we have to keep reminding ourselves that Doogee X5 Pro is targeted to the budget crowd.

Perhaps the biggest difference between the two smartphone models is the additional amount of RAM present in Doogee X5 Pro (2GB). This will help to deliver additional performance in not only games, but multitasking can be carried out swiftly, along with the quick firing of applications that will result in a satisfactory mobile computing experience.

The internal memory itself is on the low side; 16GB, but Doogee has incorporated a microSD card slot that will allow you to expand your storage up to 32GB. It is highly recommended that you purchase a high performing storage card, otherwise you will run in to performance issues when you attempt to open up your applications, or are running graphically intensive video games.

After looking at the primary hardware specifications, let us jump to the segment where we will be able to see how much performance you can get from Doogee X 5 Pro. After firing up AnTuTu, the device was able to obtain a score of 31,368 points in the benchmarking application, which is not exactly a bad score, but if the smartphone was loaded with impressive hardware and a higher clock speed, then we would have seen that score jump up immediately. 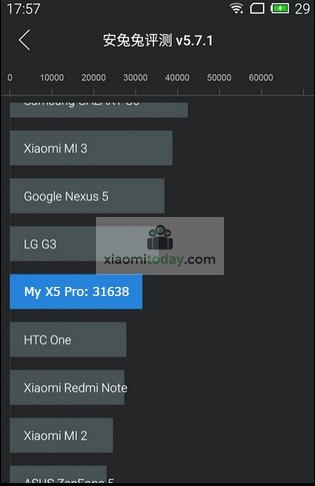 The Mali-T720 will be responsible for delivering smoothened frame rates, although we did manage to experience a slight bit of lag in taxing gaming applications such as Mortal Kombat X, N.O.V.A, and Batman Arkham Origins Blackgate. Even though this performance issue only occurred during the beginning of our gaming session, we would have preferred that it would not happen at all.

One of the reasons why we experienced such a smoothened out operating system was because Doogee X5 Pro is running Android Lollipop 5.1 as soon as we took it out of its packaging. As far as the interface is concerned, it was smooth as butter, although did run in to a few hiccups when we immediately started swiping our fingers across the home screen.

We were able to solve this problem by installing a 3rd party launcher called NOVA Launcher, because it not only provides users with so many options to customize their home screen, but also delivers impressive performance; something that majority of smartphone owners require from their handset. As stated above, in order to experience better performance, we highly recommend that you purchase a high performance microSD card, since that solved a large portion of the problems for us.

Since Doogee X5 Pro comes running with Android Lollipop 5.1 pre-loaded, we hope that the smartphone will receive an update to upgrade the handset to Android Marshmallow, which is expected to provide more battery life and performance to the user. Let us keep our fingers crossed.

You should keep in mind that when the battery level of a smartphone drops to 20 percent, it would be wise to plug in the your device because completely depleting a lithium ion battery will reduce its overall capacity, which only means that you will have reduced the number of hours of keeping your device powered on.

There you have it; we reviewed Doogee X5 Pro and had a lot of mixed feelings about the smartphone even though we know that it belongs to the mid-ranged category. Perhaps the biggest surprise was that the device was able to score in excess of 30,000 points in AnTuTu, indicating that users will easily be able to scrape a lot of performance from it. One other thing that really enjoyed was that our smartphone was running Android Lollipop 5.1 out of the box. We sincerely hope that an Android Marshmallow update is released in the near future, so we can get more out of our smartphone.

Our final thoughts from Doogee X5 Pro is that it will provide users with sufficient processing capabilities, now that it has a whole gigabyte of RAM present underneath its housing. For a mid-ranged smartphone, Doogee X5 Pro is a worthy purchase, in case you do not have sufficient money to spend on a better performing smartphone.