CUBOT Quest is a smartphone for the adventurers, sportsmen, or anyone who regularly mishandles his device. It is reinforced, has IP68 Waterproof certification (water and dust resistance), and is also Shockproof. You can see an impressive series of torture on the smartphone, ranging from the simple fall to be rolled over by a car, through the immersion where the burial in the sand without the device experiencing any inconvenience.

Cubot Quest has fairly compact dimensions of 157 x 73.7 x 8.8 mm for its intended use. When it comes to thickness, less than 9mm is really not much, Quest does not stand out in this respect from ordinary headphones while being one of the thinnest available on the market of durable smartphones. The Cubot Quest case is available in two colors: black and red. The red one looks nice, and the colorful accents immediately inform that it is a regular smartphone.

Quest housing is made of metal covered with a plastic layer designed to absorb shock and ensure the tightness of the entire device. On the right side of the housing, as standard, we already find volume control buttons. And a screen lock button located between two tabs. Thanks to which it is much less likely to accidentally press the button, e.g. Cubot has renounced the notch in the quest. The resolution of 1440 × 720 pixels to 5.5 inches corresponds to a pixel density of 293ppi. This is HD and is enough in everyday life completely.

As a processor, we find a MediaTek MT6762 Helio P22 Octa-core CPU at 2 Ghz and an IMG PowerVR GE8320 video card. while in terms of memories we have 4GB and storage memory of 64GB expandable with micro SD. The memory is expandable via Micro SD, but having a phone with such a large memory is certainly a plus for this Cubot Quest.

The rear dual camera has a 6P lens SONY IMX 486 and a resolution of 12+2 MP and a dual-LED flash. There is a PDAF focus if / 1.8 aperture. And a stunning selfie comes with an 8.0mpix front-facing camera. An accelerometer is a built-in electronic component that measures tilt and movement. A fingerprint sensor is one of the simplest and safest ways to protect your smartphone.

The proximity sensor detects when a user holds close to their face during a call and turns off the display. Quest has dual sim functionality, which means you can insert two different SIM cards and use both from the same phone. The phone is IP68 certified, water and dustproof. Given the small thickness and size of the CUBOT Quest model, this 4000 mAh battery is really big.

CUBOT Quest is a really nice smartphone that will work in the hands of an active. urban users on a daily basis, but also during running training or cycling, trips. CUBOT Quest is now available on Gearbest For just $124.99 on 11.11 Sale. Click the following button for order now: 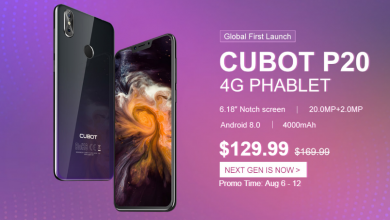