The Creality CR-10 S5 3D Printer is the biggest version in the CR10 series. With the Creality family printers, you can rest assured that it will print reliably and good quality prints. The printer has a aluminum frame and double Z-axis for higher precision.

The Creality CR-10 S5 3D Printer includes all parts and tools to assemble the 3D printer. There is a sample of filament included, but to start printing we recommend a spool of filament.

Filament Runout Detection Sensor: A feature found pretty commonly today. You run the 3D printed sensor between the spool and the hotend. If the filament runs out, the mechanical sensor picks up the information and pauses the print, so you can resume later. This is one of the major improvements of the Creality CR-10 S5 3D Printer. And rest assured, it will come in handy you’ll start printing bigger models.

External control board: As with Creality CR-10, the power brick, the RAMboard, and controls are located in a separate external “brick”. The spool holder is mounted on top. The heated bed now also uses a MOSFET for electrical safety. Also, the cables are significantly longer than on the regular CR-10. Dual Z Rod Screws & Motors: As the form factor’s bigger, Creality uses two Z axis screw rods and motors on this printer. This leads to more reliable performance. The Dual Lead Screw design will also stabilize the machine on all prints.

Auto-resume feature: In case of a power failure, the Creality CR-10 S5 remembers where it left off and will resume printing when you start it up again.  Heated bed: The Creality CR-10 S5 has a heated bed that lets you operate and experiment with a lot of materials. Connections: Connection-wise the Creality CR-10 S5 offers Micro-SD card and a USB connector. Removable glass bed: The bed can easily be removed to pluck the print off the bed. Also, Creality throws in a spool of Kapton tape if you don’t want to print on the bed directly.

Improved build quality: In comparison to the Creality CR-10, the quality of the parts has been ramped up in the Creality CR-10 S5. Instead of using 3D printed components, the frame uses injection-molded parts and aluminum rods. 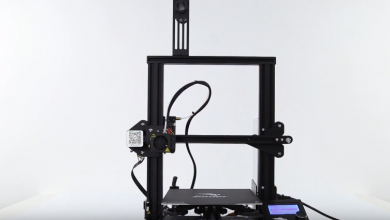