Jumper Ezpad Mini 5 is a rare tablet that also uses an 8 inch full HD screen running Windows OS at the present time. Other companies like Onda, Chuwi, Teclast all switch to Android OS with their small-screen computers. The Jumper Ezpad Mini 5 is plastic but still very solid, the machine is quite large with nearly 1cm thick because of the large 4500mAh battery installed in the cheap 8-inch tablet line.

Although still using the X5-8350 chip that has been released for 3 years, it still meets the basic needs of working as Office, surf the web, Facebook, see Full HD keys even 4K, The built-in Intel Cherry Trail Z8350 quad-core CPU, in conjunction with the Intel HD Graphics 400 graphics chipset and 2 GB of RAM for sufficient performance. Machine equipped with IPS screen 8 inches Full HD with a density of points up to 284PPI. The natural finger-touch screen makes the most of Windows 10. The 1920 x 1200 resolution boasts impressive color and clarity and IPS technology provides wide viewing angles.

The Jumper Ezpad Mini 5 only uses 2G ram and 32G system memory, though a bit small, but only running Windows 10 OS should be sufficient for those who have little software installed. And because it only runs Windows, it does not take up memory for Android OS like other Dual OS devices. The internal flash memory of 32 GB can be expanded with a memory card by up to 256 GB.

The two communication standards Bluetooth 4.0 and WLAN are supported. On the Internet, the user can surf the Internet using the EZPad Mini 5 jumper. The front camera with the 2-megapixel resolution is used for selfies and video calls. The battery has a capacity of 4,500 mAh and results in a running time of four hours, which means that the Jumper EZPad Mini 5 with a full battery charge is not sufficient for a whole day. Connections include Micro-HDMI, a USB 2.0 port, and a 3.5 mm headphone jack. A speaker, microphone and gravity sensor have been integrated into the tablet. 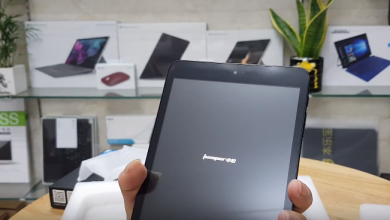