Earphones have always been utilized to listen to songs, watch videos and answer calls. With new inventions, that has changed giving it a completely new definition. Insomnia is a problem that’s affecting a large number of people and that is why there are wireless earphones designed for this specific purpose. We’ll discuss two different but great earphones from the same brand-Amazfit Zenbuds vs Amazfit Powerbuds.

Amazfit Zenbuds are wireless earphones designed in order for you to get a good night’s sleep. The noise-blocking in-ear design reduces distracting noises allowing you to sleep and meditate. It’s also great whenever you feel the need to be at peace without any distractions. You have several sleep-inducing sounds, for instance: birds chirping. It gives you a surreal experience allowing you to transport yourself to the origin of the sound. These EarBuds don’t allow you to listen to music from your playlist which might be a drawback for some but the sole purpose is to help you get a peaceful sleep.

Amazfit Powerbuds, on the contrary work like regular wireless earphones giving you the option to listen to music from your playlist. The EarBuds have an ear canal seal to deliver better audio quality and noise isolation without the design being a hindrance. It also secures the Earbuds properly, making them perfect for working out. They provide you with amazing audio quality, especially when it comes to bass. If you’re someone who loves the bass, you’ll definitely find the beat-enhancing mode very useful as it enhances bass as the name suggests. With the thru mode, ambient sound enhancement is activated which makes you aware of your surroundings which can come in handy depending on the situation and environment.

The dual-microphone helps to eliminate the background noise while on a call and thus providing great call quality. Choosing between the Amazfit Powerbuds vs Amazfit Zenbuds depends on whether you prefer listening to music or soothing sounds while blocking out noise.

Also Read,Amazfit Powerbuds vs Apple Airpods 2: Which is Worth Buying?

The design is what I truly loved with the Amazfit Zenbuds. Despite the fact that they have a similar look to Bose Sleep buds making it seem like an alternative to them, they still look incredible. The grey-white tones give the EarBuds a beautiful look. On the outside of each EarBud, there’s a clip that fits inside your ears. What’s incredible is that each EarBud only weighs around 1.78 g, which makes them feel very light on your ears. After a while, you even forget that you’re wearing them. It comes with three different sized silicone tips to ensure that it’s a great fit for everyone in both models-Amazfit Zenbuds vs Amazfit Powerbuds. I didn’t find it looking too awkward, in fact, I thought it looked great.

On the other hand, the Amazfit Powerbuds look great though they’re not innovative. With three various colors to choose from, you have the option to select the one suitable for you. With a subtle mix of red while black dominates, the EarBuds are suitable for all occasions. If you want them to stand out, the white body would do just that with a slight tint of orange or yellow. An ear canal keeps the EarBuds from falling out during any event. You could also use them without the ear canal giving them a subtle look. I did like how it looked with and without the ear canal but I prefer using the ear canal only while doing strenuous activities. The fit was something that I thought was incredible in both the models-Amazfit Powerbuds vs Amazfit Zenbuds.

The case of Amazfit Zenbuds is truly innovative with astonishing design. Its case has a white body that is circular in shape. On top of that, the brand Amazfit is present in silver. What I loved the most was the sliding mechanism of the lid. The case has three LED lights at the front to indicate the battery status. Amazfit Powerbuds contrariwise has a common case in the shape of a pill.

Since the Zenbuds are designed for sleep, they’re very comfortable. Even when you have them on for hours, you won’t experience any discomfort. It doesn’t disturb your sleep either no matter which position you sleep in with them on your ears. Being lightweight makes them hardly noticeable in your ears. While the Amazfit Powerbuds may not provide you with the same comfort as Zenbuds do, they’re still quite comfortable. If the ear hook does get uncomfortable after a point, you can easily take them out and continue using the EarBuds. With sports enthusiasts kept in mind, the EarBuds have IP55 water resistance. It protects them from dust and water from low-pressure jet spray in any direction. In terms of comfort, the Zenbuds do the job well in the comparison of Amazfit Zenbuds vs Amazfit Powerbuds.

Since Amazfit Zenbuds don’t have a physical button or touch control, you can only control them through the Amazfit app. Controlling the volume of EarBuds is easy, which you can do with the app. You can also control the playback and set an in-ear alarm so that you don’t end up disturbing your significant other or anyone else. Through the app, it’s possible for you to make use of the automatic pause function. The function allows the EarBuds to stop playback automatically when you fall asleep. If you want to experience with sounds other than the default ones to see which one is suitable for you, it’s possible to download different sounds through the Amazfit app. However, it is limited and doesn’t provide you with a lot of options.

Amazfit Powerbuds, in contrast, lets you control music playback and calls with touch gestures. You even have the option to customize what tapping each Earbud would do. If you’re not a fan of touch controls, you can easily control the EarBuds with the voice assistant. With the in-ear detection sensor, you don’t have to use touch gestures but instead, your music stops playing when you take an EarBud out and resumes playing again once you put it back. When it comes to controls, Zenbuds are controlled via the app whereas Powerbuds make use of touch gestures in the comparison of Amazfit Zenbuds vs Amazfit Powerbuds.

There is a heart rate sensor in the EarBuds of both models-Amazfit Powerbuds vs Amazfit Zenbuds. Zenbuds monitor your sleep position and quality which you could check through the app. You get recommendations in order to improve your sleep quality. Whenever your heart rate goes past the pre-set warning value in Amazfit Powerbuds, you’ll get a voice notification ensuring that your health is taken care of. The Powerbuds Earbuds have Bluetooth 5.0 technology. Pairing them is easy, which takes place automatically after the initial pairing once you take the EarBuds out of their case. Between the Amazfit Zenbuds vs Amazfit Powerbuds, Zenbuds are perfect while sleeping whereas Powerbuds are perfect for workouts.

Also Read,Top 5 Best Xiaomi Earbuds that are worth buying (2020) | UPDATED

The EarBuds provide a battery life of 8 hours in both the models-Amazfit Zenbuds vs Amazfit Powerbuds. This applies to Zenbuds if the sleep monitor is off and there’s continuous playback of the melodies. You can extend the battery life of Zenbuds to 12 hours if the playback stops after 3 hours while the sleep monitor works continuously. With the case, you can get up to 56 hours of playback if the sleep monitor is off. Powerbuds conversely has a 450 mAh charging case which provides 16 hours of playback. You get a total of 24 hours when you consider the case and EarBuds. With fast charging, it only takes 15 minutes in order to provide 3 hours of power. It supports Type-C charging. Inclusive of the case, the Zenbuds provide more playback time in the comparison of Amazfit Powerbuds vs Amazfit Zenbuds.

Which Amazfit earbuds should you buy? – Verdict

Both the earphones are for two different types of people with each serving a different purpose.

If you want to experience totally different EarBuds for the purpose of meditation or dozing off then go for the Zenbuds. It’s a new tech behind your buds and serves a different purpose than your regular earphones. They’re also great at blocking out the noise, which would be perfect if you have a partner that snores. These EarBuds provide you with soothing sounds so that you can sleep peacefully and they’re comfortable to wear. With long battery life, you can use it for weeks without charging it. The EarBuds have a heart rate sensor to monitor your heart rate throughout the day in both models-Amazfit Zenbuds vs Amazfit Powerbuds. All in all, they’re both amazing earphones to own. The final decision depends on your lifestyle and preference.

Amazfit Powerbuds vs Apple Airpods 2: Which is Worth Buying? 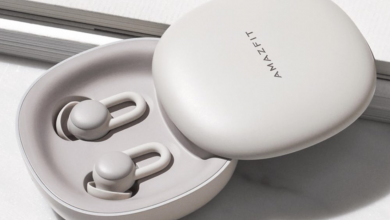