Huami is responsible for making fitness-oriented wrist wearables and bands for the tech giant Xiaomi. But in recent years, Huami has started to launch the smart bands under its own sub-brand Amazfit. Further, it also follows its core tenet of delivering value-for-money devices like Xiaomi and is successful too in its perception.

The CES 2020 tech fest has been concluded yesterday with lots of rememberable memories for global brands across. Especially, Xiaomi-backed Huami was one of the iconic highlights of the event with numerous announcements/launches on the stage.

Besides the Amazfit T-Rex smartwatch, it also unveiled the Amazfit Bip S in the same corridor along with the wireless earbuds to mark its entry in the TWS earbuds segment. The Amazfit PowerBuds and Amazfit ZenBuds are the new introductions with specifically dedicated features. The company also has shared some space in the home GYM terrain and brought the Amazfit AirRun and Amazfit HomeStudio treadmill machines.

Anyway, let’s focus on the in-hand device, the Amazfit T-Rex rugged smartwatch, which is likely to soar up the user experience of fitness/health-cautious people. Without delaying any longer, let’s move to the subsequent section to find out more information about the tough equipment.

The Amazfit T-Rex Review: Full Features and Specifications of the Rugged Smartwatch

As being advertised, the new Amazfit T-Rex is meant for outdoor use with circular dial design. It authenticates several military-grade tests by passing out the 12 high-grade regulations. It confirms MIL-STD-810G standard to put itself in the rugged category precisely.

Furthermore, the chassis of the watch is built of the high-grade plastic, which keeps its weight low at only 56g. It looks giant and bulky, but you will barely feel it on your wrist. Its ruggedness approach also ensures to face severe temperature marks successfully. The T-Rex watch can withstand up to 70-degree Celsius hotness and minus 40-degree coldness. 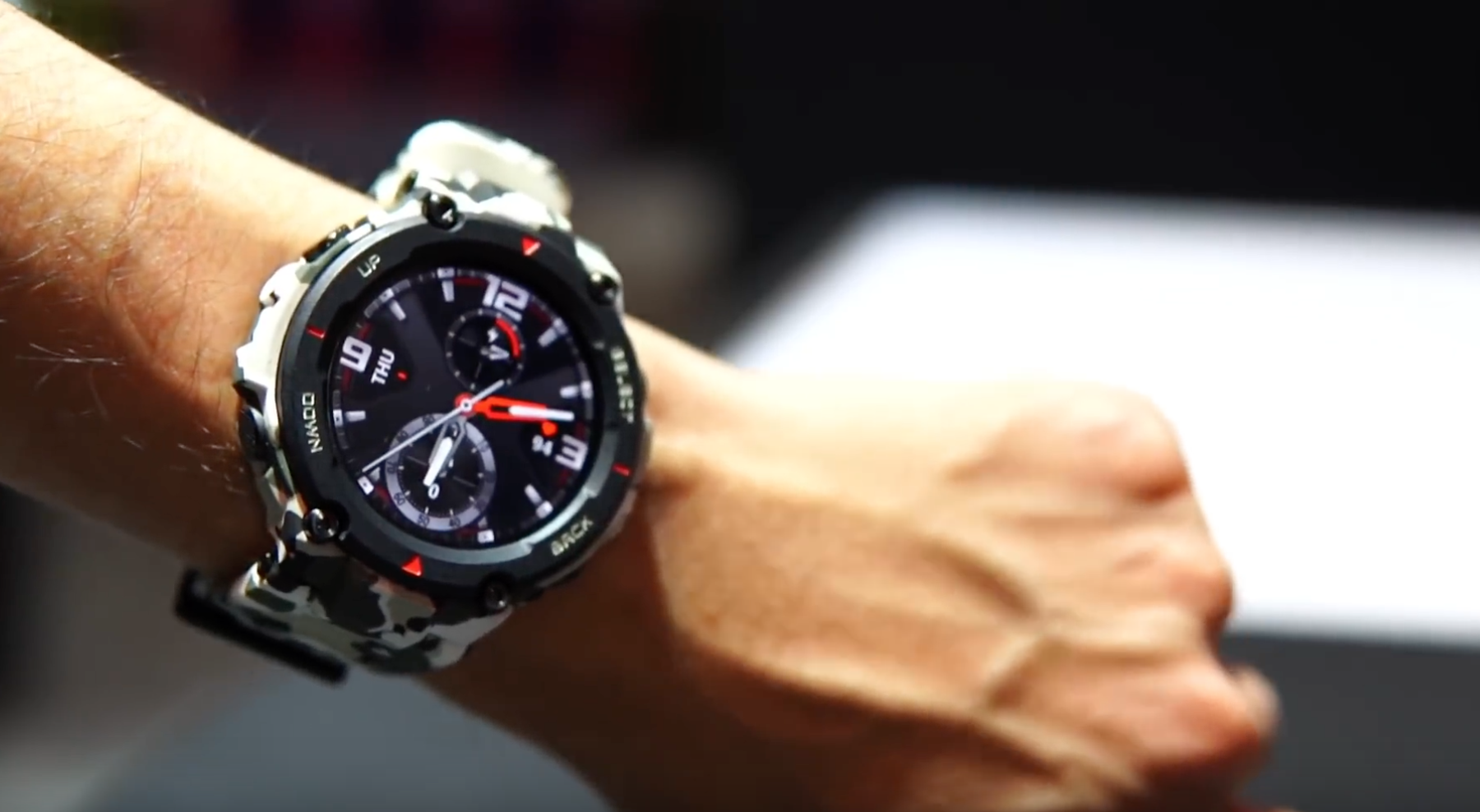 Externally, it bears a 1.3” AMOLED panel on the front alongside the Corning Gorilla Glass 3 safety layer on top. Around the dial panel, you will find Up and Down buttons on the left side, whereas Back and Select buttons on the right side. These buttons will allow you to navigate the user interface even when you are wearing gloves etc. The respective names are also mentioned on top. On both sides, the watch consumes two interchangeable black-coloured silicone straps. These are quite comfortable to wear for the whole day with some holes to adjust every wrist size conveniently. Contrarily, the straps are stretchy and grippy too and feel low-quality as well.

When it comes to describing the bottom side, here, you will get the magnetic charging pins to empower the watch. It is sweat-resistant surface, allowing you a smoother grip all over the wearing time. 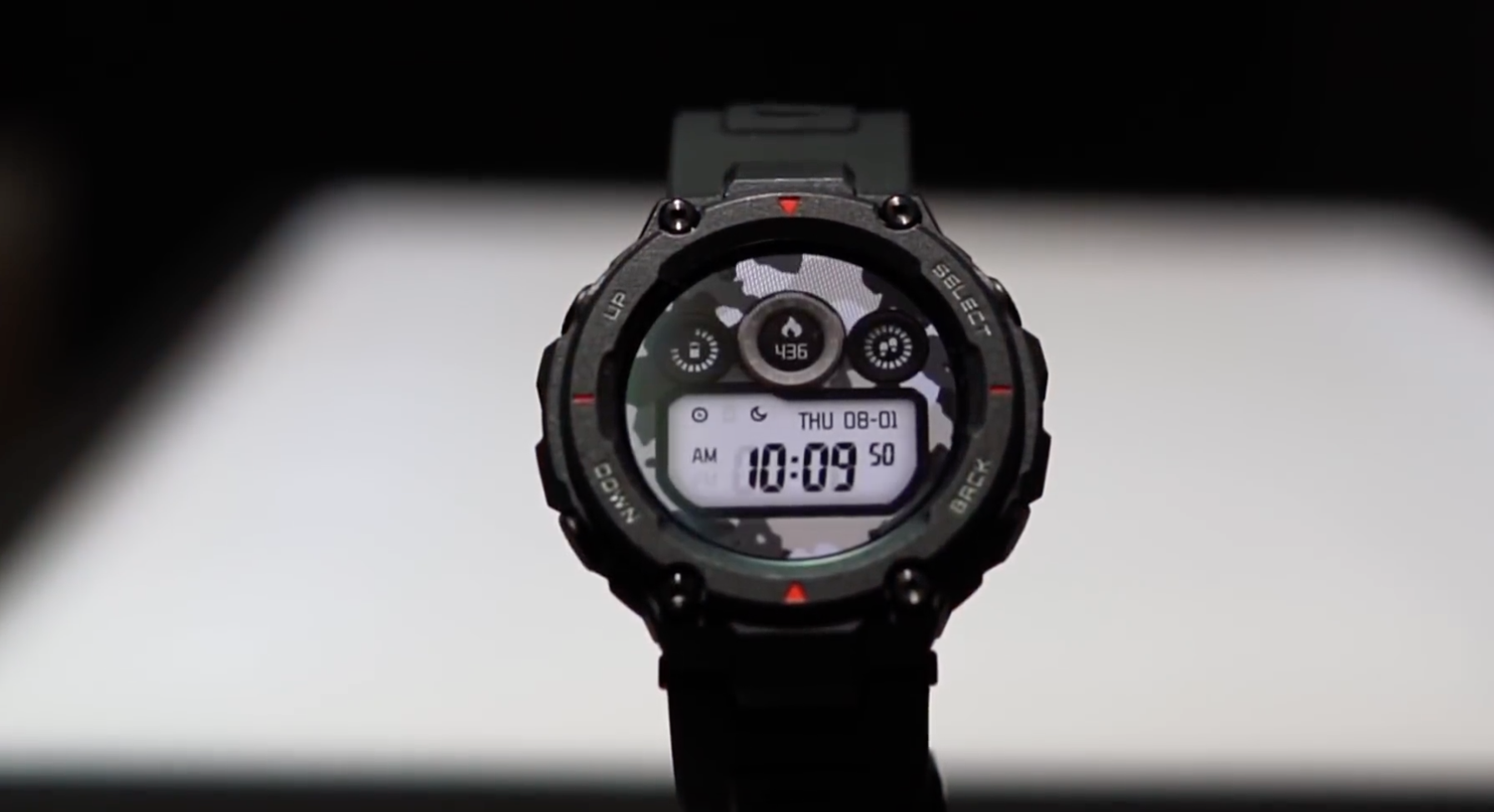 Let’s glance at physical prospects to know more about colours and dimensions. The Amazfit T-Rex smartwatch measures 47.7×47.7×13.5 mm to weigh around 58g. The colour choices are Black, Ash, Green, Khakhi, and Camouflage.

The Huami Amazfit T-Rex rugged smartwatch looks nice in the round dial and screen to follow traditional aspect to some extent. The 1.3-inch AMOLED touchscreen dominates the front panel with lots of other inbuilt utilities. It offers vibrant colours and reliable user interface to deal with the routine tasks easily.

Moreover, the circular panel is an Always-On display. It allows you to operate conveniently in the sunlight on behalf of good brightness level and visuality. The 360×360 pixels resolution escalates the overall experience in collaboration with the Corning Gorilla Glass 3 screen protector.

In the connectivity wing, we have seen several smart wristwatches previously, featuring the famous Bluetooth + WIFI + Mobile App combination. In the case of Amazfit T-Rex smartwatch, you will get the Bluetooth 5.0 along with the GPS + GLONASS services for wireless connectivity. These integrations will facilitate you to create a cordless connection with the outer world.

Furthermore, if you want to manage the operations via your smartphone, you can do so by installing the Amazfit App on your phone. Well, the app configuration is yet to test, and we’ll let you know more about it in some days.

Apart from these connectivity modules, your Amazfit T-Rex wristwatch is also compatible with the Android 5.0 and iOS 10.0 or later editions.

The power circuit of the smartwatch features a 390 mAh non-removable battery. Which can last for 20 days per charge on average use. Similarly, switching to the Basic Mode will deliver you up to 66-day battery backup, and continuous GPS usage will allow the battery to run for around 20 hours. To refill the pack, it embeds magnetic charging pins at the bottom, which need around 2 hours to accomplish the 100% battery mark.

The Amazfit T-Rex is also an ideal device for fitness and health-oriented people. For sportspersons, it brings up to 14 Sports Modes including Walking, Indoor Running, Outdoor Running, skiing, Mountaineering, Elliptical, and some others.

On the health trackers side, the watch installs the PPG optical heart rate sensor, 3-axis accelerometer sensor, geomagnetic, and ambient sensor. Collectively, these algorithms will monitor your overall health Performa and suggest you better health tips and tricks. 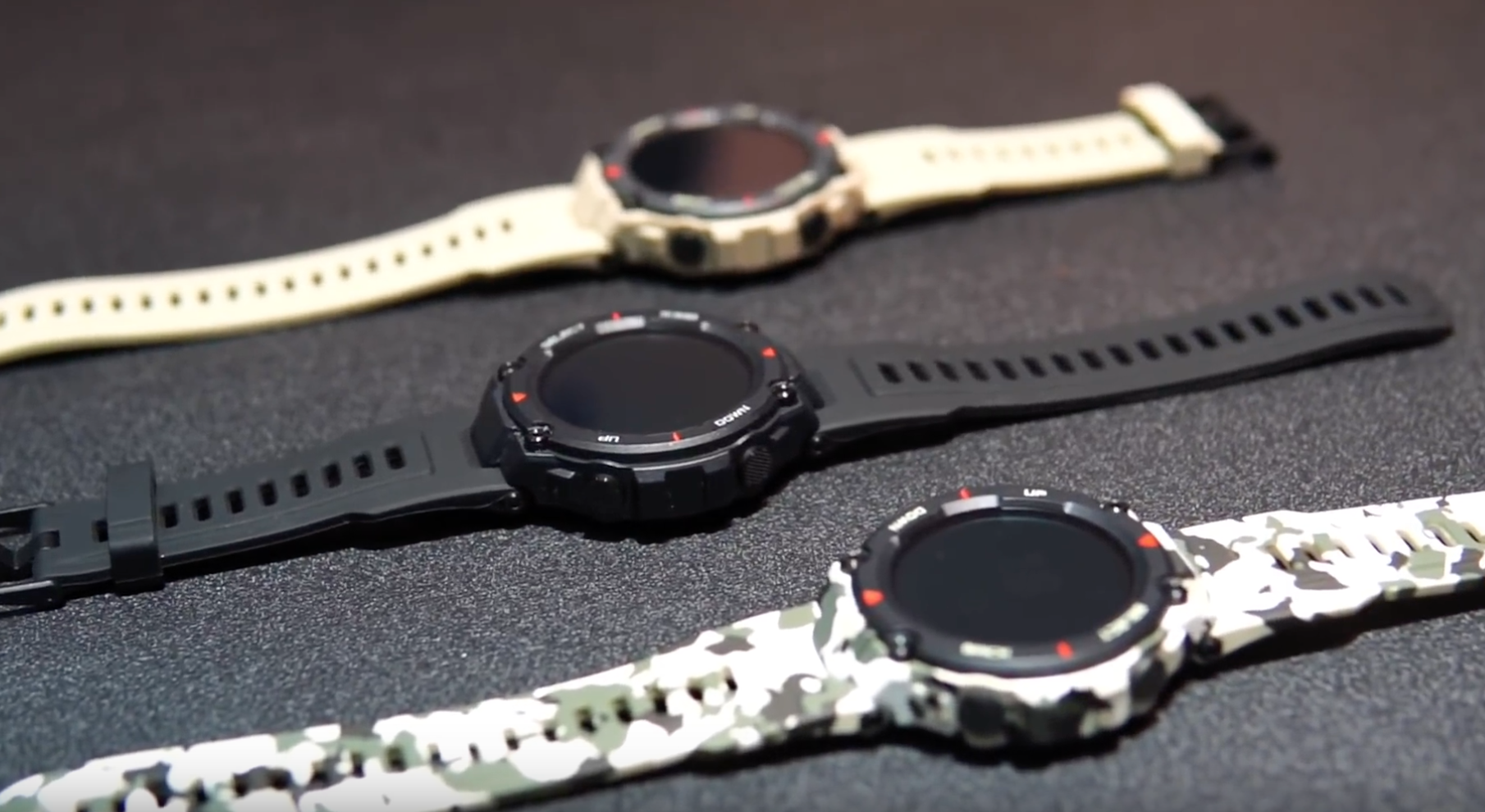 In other specifications, the Huami Amazfit T-Rex smartwatch also supports 5ATM water-resistant approach. Therefore, it can survive successfully under the 50m water depth.

In the Amazfit T-Rex review conclusion, we can term the device to be the ideal equipment for fitness and sportsmen. Because of the proved ruggedness and tough body, good sound from a battery, scratch-resistant display panel and elegant look, the T-Rex seems a worthy choice in the sub-$200 price bracket. 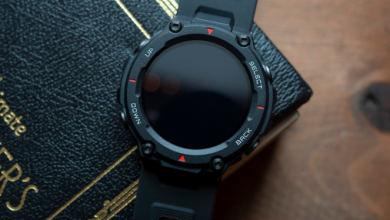 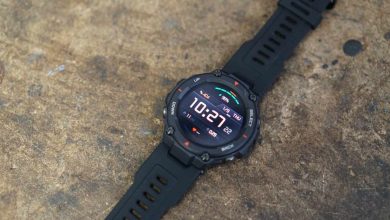 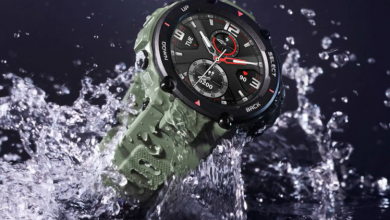 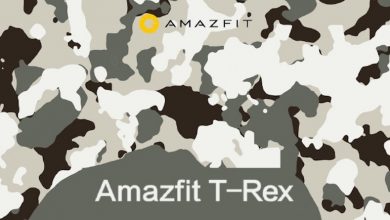 Haumi announced to launch smartwatch on the 1st of Jan.:  Amazfit T-Rex