Smartwatch enthusiasts will find this article comparing the Amazfit GTR Iron Man vs Amazfit Stratos 3 Star Wars smartphone editions. Huami, the manufacturer of this well-famous smart wearable series, tends to convey durable and quality-rich products at affordable prices. Today, we have a range of Huami smart wristwatches from the same brand, and two of them are under our scanner here.

The Amazfit GTR Iron Man 47mm variant has a 1.39-inch touch panel on the front and bearing 5ATM water-repellent certification, Bluetooth 5.0, NFC, GPS and various other smart sensors inside.

Similarly, Xiaomi-backed Huami strived again and entered the market with new ultra-advanced smartwatch developments within a month. On August 27, the company launched three new smart wrist wearables in a queue – Amazfit GTS, Amazfit X and Amazfit Stratos 3. Among these, we will focus on the third item, such that the Amazfit Stratos 3, as pointed above.

The Amazfit Stratos 3, which is also known as Amazfit Smart Sports Watch 3, also brings the Star Wars edition alongside the Classic Edition and the Elite Edition. It is a round-shaped 1.34” dial featuring above 2,50,000 colours. Moreover, it mounts a slew of advanced parameters to compel the sports and fitness enthusiasts at large.

Amazfit GTR Iron Man Vs Amazfit Stratos 3 Star Wars: What is the Difference?

Both the Huami Amazfit smartwatches are looking super-cool and fascinating with scintillating features. Further, contenders are from the same parent; hence, it will be interesting to know the line of differences irrespective of their price figures. Here we go with the details.

By design, both participants look similar at the prima facia with the round dial design and ergonomic finish. The Amazfit GTR Iron Man, being the sub-edition of the regular Amazfit GTR 47mm watch, gets the same physical aesthetics as the standard variant. The only difference is the execution of red silicon strap, gold colour chassis and black colour matte ceramic colour. The top side features the 1.39” touch AMOLED panel with corning gorilla glass. Whereas the bottom side equips some smart algorithms to assist you smartly. The band width stays 22mm.

Furthermore, the smartwatch is developed using the panchromatic stainless-steel with highly-attractive appearance. It is relatively thicker than the 42mm edition, measuring 47.2×47.2×10.75 mm and weighing 48g against the 25g that of the 42mm variant.

On the opposite side, the Amazfit Stratos 3 Star Wars edition also features the round dial design to keep the 1.34” circular TFT Full Moon touch panel on top. It embraces the corning gorilla glass 3 protection layer as well.

Moreover, the smartwatch adopts the stainless-steel plus zirconia ceramic bezel, reinforced plastic bottom case and breathable silicon straps. Alongside the touch control, you will also get four physical buttons on the device to enjoy a comprehensive user experience. The straps length measures 120mm (long) and 75mm (short) and width is 22mm. Similarly, it weighs around 40g.

Therefore, both Amazfit wrist wearables are well-enriched physically and drive exceptional beauty and stature together. The duo is competent enough to face versatile climatic conditions to ensure all-season service around the year.

Let’s have some words on the front aspects of the smartwatches. The Amazfit Stratos 3 Star Wars comes with a 1.34-inch touchscreen (320x320p) in the circular shape. The full round trans-reflective MIP TFT board occupies the top area to add enriched experience for users. 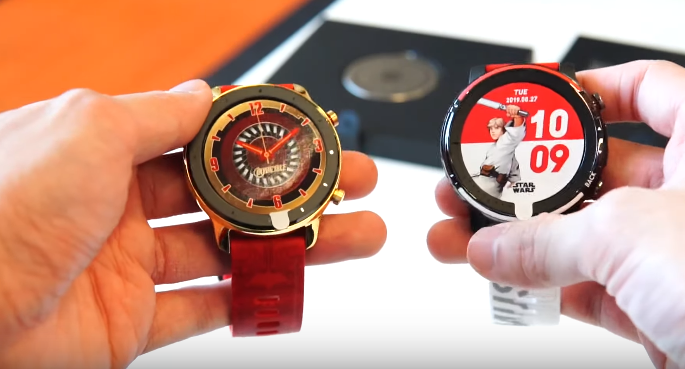 Furthermore, the panel is designed by JDI to be recognized as the Full Moon display, which assured the full visibility in the direct sunlight as well. For protection, the 5ATM display also hails the corning gorilla glass 3 coating for protection against scratches etc.

On the other hand, the Amazfit GTR Iron Man also brings the round dial design and hosts the 1.39” AMOLED touch panel. Further, you will get 454×454 pixels resolution, 326 PPI pixels density and of course, the corning gorilla glass 3 protection. The 5ATM water and dust-repellent will allow you to submerge the device in up to 50m-depth of water.

When it comes to comparing the power stations of Amazfit Stratos 3 Star Wars vs Amazfit GTR Iron Man smartwatches, we see a difference of nearabout 100 mAh power. The Stratos 3 Star Wars acquires the 300 mAh Li-Ion battery to take 2.5 hours for a single fill.

Autonomy varies according to the modes of usage. For instance, it will last for 7 days on smart mode, 14 days on the ultra-endurance mode and 35 hours on continuous GPS mode. To empower it, you will use USB magnetic charging stand via four POGO pins at the bottom.

The Amazfit GTR Iron Man variant, on the other side, equips a larger 410 mAh battery to serve you for a better time. The basic watch mode will last for 74 days, whereas the typical usage and continuous GPS modes will serve you for 24 days and 40 hours, respectively.