Some smartphone companies were founded a few years ago, but they have already won the world. The rest of the mobile brands have been in the market for more than 10 years and have their customers in more than 43 countries, but we are not aware of them. AGM is the brightest example of the latter. All of its models have an IP68 certificate allowing the phone to be thrown into the water and stay there for 30 minutes at depths of up to 1.5m. Plus, they provide 99% dustproof performance. Thus these phones are designed mainly for travel enthusiasts and outdoor workers. Being available in over 43 markets means the AGM smartphones are optimized for customers with different cultures and languages but the same needs. That’s why every 3 out of 10 customers prefer this brand. Earlier this year we have heard AGM is going to launch a Snapdragon 835-powered smartphone that also should have rugged features. It’s supposed to be the AGM X2. But when this device was announced there was no SND835 chip in its specs list. However, this handset is full of surprises. It’s considered to carry the title of the most powerful rugged smartphone on the planet for a long time. We think so because it sports high-end features and it’s a rugged handset with the MIL-STD-810G U.S. military certification. Thus the glass body of the AGM X2 can also provide a 1.2m drop resistance performance. Well, we have already got the AGM X2 is a great handset in terms of ruggedness. But what about the hardware and software. It turns out all features in this handset are perfect. This means we are dealing with the first rugged smartphone designed for the high-end category. Even if it doesn’t match all the requirements of this niche, the X2 can be considered one of the best super mid-range handsets. Let’s explore how.

Check out the AGM X2 Deal.

Externally the AGM X2 looks like a well-protected phone carrying a rubber frame around the body. This has been done to protect the phone from drops. Say, if we used to see a regular smartphone to come with rounded corners, the AGM X2 appearance is closer to a polygon shape. There are over a dozen of screws around the perimeter fixing the protective rubber ‘ring’ to the body. However, the back of the phone is not covered with this material. It’s made of glass.

The AGM X2 can’t be considered as a stylish phone. A quick look at the back panel proves my words. Though there are too many useful features including a dual-camera, flashlight, noise cancellation microphone, fingerprint scanner, and a speaker, they are placed according to the phone construction and not to a good look.

The dual-camera is located on the upper left corner like many high-end smartphones such as the Xiaomi Mi 6 or Huawei P10. Next to it, we can find the flashlight made for better capturing experience in low-light conditions. I guess it should be used frequently if taking into account for whom the AGM X2 has been designed. The fingerprint sensor comes in a square shape like old phones. And it’s made of metal, not a glass or ceramic. But this is quite a logical approach, as we are dealing with a rugged handset. Looking at the lower part of the rear panel we can notice a printing showing one of the selling points – MIL–STD–810G. But below it is another printing revealing everything about this phone – ‘Designed by AGM Germany / Assembled in China’. Now we understand why it is sold in many markets.

The front panel comes in an unusual shape with many plackets. That’s why the height of the product is at 16.85cm, but the screen’s at 5.5 inches. As for the dimensions, the AGM X2 comes at 16.85 x 8.34 x 1.40 cm and weighs 213 grams. Thus it’s neither thin nor light. But the company has done its best to reduce its weight by using glass on the back instead of other material. Anyway, the front side of the phone is impressive as well. It comes with a selfie-centric camera with a 16MP sensor.  This function is highly demanded nowadays. So the manufacturer decided to pack its flagship with such a lens too.

As I said, the screen is at 5.5 inches and uses AMOLED matrix. This display also provides Full HD resolution. Thus it will present crisp and vivid image while preserving authenticity, bringing you the incredible visual experience. The AGM X2 is a solid phone, so it’s expected to see the latest protective glass on it. That’s it. The display is covered with a Corning Gorilla Glass 5. So no reason to worry about the scratches and accidental drops.

Finally, as for the interfaces and keys, the top side carries a 3.5mm audio jack protected from water and dust. The micro USB Type-C port is on the bottom. It’s protected as well. The power button is backlit and it’s on the right below the SIM card slot. Therefore, the volume rocker is on the left.

Unfortunately, the AGM X2 doesn’t come with the latest creation of Qualcomm. If it is packed with the Snapdragon 835 chip and 8GB of RAM, it will appear in the first positions, undoubtedly. But I guess these features will affect the pricing. So the company has decided to bring a super mid-range chip to its flagships. The AGM X2 sports a Snapdragon 653 octa-core chip. This is not the best or the latest SoC, but it’s been considered as the best option in this niche before the launch of the Snapdragon 660. The SND653 processor can be found on such beasts as the Nubia Z17 or Vivo X9 Plus.

As for the chip itself, it was introduced about a year ago along with the Snapdragon 626 and Snapdragon 427. All three models have been designed to boost performance, enhance connectivity, and help improve charge times in comparison with previous-gen chips. Those improvements especially refer to the following points:

The chip is paired with a whopping 6GB of RAM, 64GB of internal storage, and Adreno 510 GPU. But this configuration is for the standard version that also supports VOC (Volatile Organic Compounds) sensor. VOC is a special sensor capable of detecting if our environment is safe for human breathing and if there is any type of concentration of VOCs in the area. The AGM X2 Standard Version is priced at 3699 Yuan ($553). There are also two other models – Higher version (6GB+128GB+VOC) at 4199 Yuan ($627) and Exclusive version (6GB+128GB+Beidou module+8000mAh+VOC) at 7999 Yuan ($1195). As you can see, the latter comes with Beidou module and 8000mAh battery. Officially, this version can communicate in the no man’s land. It also automatically sends life help SMS. The version is expensive but is a total life savior in certain survival scenarios. At the end, there’s also a special Crocodile pattern version of the first two variants as well priced 3999 yuan ($597) for the standard version and 4699 yuan ($702) for the higher version.

The standard and high versions of the AGM X2 are packed with a 6000mAh battery supporting Quick Charge 3.0. It works perfectly under the control of AGM X OS based on Android 7.1. Thanks to the chip as well as the optimized software the AGM X2 provides a long-lasting battery life on a single charge. For example, we have tested it for watching video online, and it showed awesome results. When there was remaining 41% power we started watching video online via WiFi. Within 6 hours it consumed 30% only.

Officially, the AGM X2 provides up to 480 hours of standby and 50 hours of talk time. It can be fully charged in 1 hour.

The AGM X2 is great in terms of connectivity as well. Thanks to the Snapdragon 653 chip it supports numerous frequency bands. Thus it is compatible with various carriers in different countries and regions.

Now let’s take a glance at one of the most interesting features of this handset. No one could imagine a rugged smartphone can come with a dual-camera. But who said durability should affect the hardware? Fortunately, AGM thinks so. It has packed the X2 with a dual-camera on the back using Sony IMX386 1.25-micron large-pixel sensors. The monochrome + RGB sensors capture more light and details than traditional cameras. That’s why you can get the professional DSLR Bokeh effect. Thus the phone is capable of making the subject to stand out from the background and blurs the latter. Other than that, the 6P lenses with an aperture of f/2.0 and professional camera algorithm allow you to take stunning photos in low light conditions.

There is an all brand-new portrait technology. Thus now you can shoot professional DSLR-like pictures with clear details, vivid color, and beautiful effects. Shortly, you have all chances to get the same shooting experience seen on such great models as the Xiaomi Mi Max 2, Mi 5X, and even Mi MIX 2, Mi Note 3 and Mi 6.

The front camera uses 16MP Samsung S5K3P3 sensor. This lens has appeared on such phones as the Xiaomi Redmi Note 3 Pro, Doogee MIX, and Vernee Apollo Lite. But note it was the main camera not a secondary. Anyway, you can beautify your face with the latest smart facial recognition or choose the beautifying level and soften your skin manually.

The durability of this smartphone can’t be overstated. It’s not only certified with an IP68 and MIL-STD-810G but also it holds the patent on the smartphone floating module. So never worry about the phone sinking into the deep water. I am not talking about the AGM App that brings a lot of joy including a protractor, compass, torch, loupe, ruler, plummet, gradienter, and many more. Plus, the AGM X2 features the most comprehensive Navigation Satellite System on earth, GPS, AGPS, and GLONASS. All these features hint we are dealing with a real rugged smartphone designed for travelers and outdoor workers. But when we look at the hardware and software features including 5.5-inch Full HD AMOLED screen protected with Gorilla Glass 5, Snapdragon 653 chip, 6GB RAM, 64/128GB of internal storage, 6000mAh battery supporting QC3.0, dual-camera with Sony IMX386 sensors, front camera with 16MP Samsung S5K3P3 sensor, USB Type-C, own-developed AGM X OS based on Android 7.1 and other specs, we understand this is a super mid-range smartphone capable of fighting with many top-notch models. So the price tag set for it is quite acceptable. At last, the AGM X2 carries the title of the best rugged smartphone, fairly. 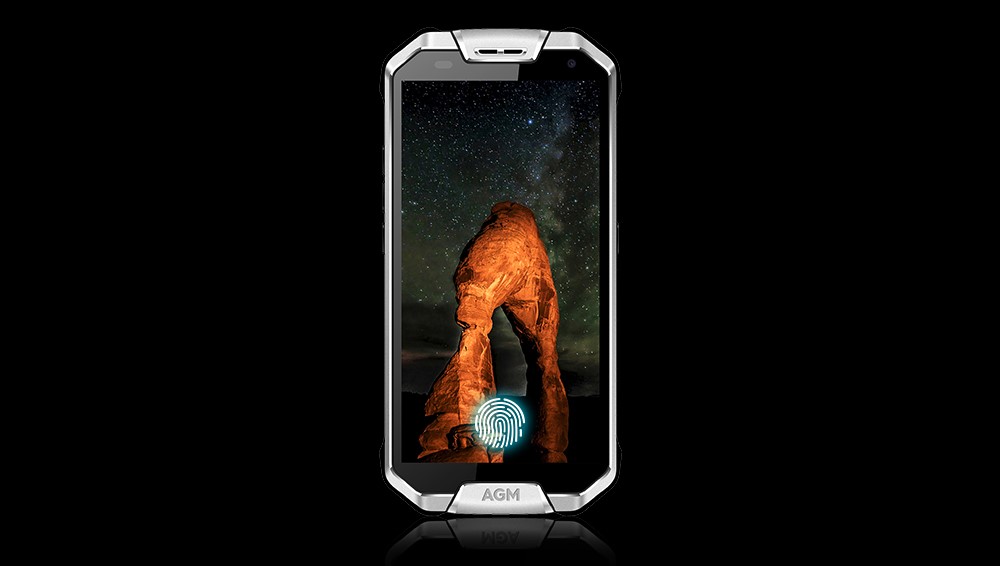