360 D819 Intelligent Video Doorbell as your eyes to protect the security of your home, which incorporates 360 AI face recognition technology and motion detection. He can accurately recognize family members, friends, and strangers. Very smart to use. The changes made at home will be transmitted to your phone on time when you travel around the world. 360 D819 Smart Camera Doorbell is the new smart doorbell with an integrated video camera that, thanks to Artificial Intelligence, allows you to memorize and identify family, friends, and strangers with an accuracy of 99%.

A disassembly hole is provided on the upper side of the 360 D819 Smart Video Doorbell main body, and the 360 mart doorbell can be removed from the mounting base by inserting the disassembly hole pin into the hole. On its lower side is a speaker that can receive the 360 D819 Smart Video Doorbell app dialogue and doorbell button sound effects. In addition to the main unit, the 360 smart doorbells are equipped with a signal base station, which combines the functions of network signal transmission, local storage and doorbell speaker in the house. The base station with pure white signal adopts the socket design of direct power supply, and its appearance is also elliptical shape, which is half the size of the host.

It is placed on the front door or the inner door of the apartment building in one go, recognizes our friendly/family-friendly persons (after we have pre-selected them of course) and if it detects suspicious visitors who sit more than 3 minutes on our front door, informs us via push notification on our mobile phone. It allows continuous surveillance 24/7, through the IR-CUT function which has a clear recording even during the night, the camera has a Full HD 1080P 2.1MP sensor for shooting very fluid videos that will be transmitted via the integrated independent WiFi antenna, also through the 162 ° wide-angle lenses it is able to detect movement even on the sides of the door.

Visitors will be able to watch, listen and talk in real-time anywhere and anytime, and it has an integrated alarm system, which will be issued in the event that Doorbell 360 D819 Smart Camera is disassembled. It has a built-in 5000mAh battery that allows up to 6 months of standby time, for the recording you can store up to 48 hours in the cloud or via 128GB micro sd, you can adjust the volume and the connection is completely wireless. With the PIR motion sensor, it will transmit the video on the screen of your smartphone in case someone remains in front of the door within a radius of 3 meters for at least 15 seconds, great for checking your home when you are out.

360 D819 Intelligent Video Doorbell is now available on Gearbest For Just at $89.99 on Flash sale promotion. Click the following Button For order now: 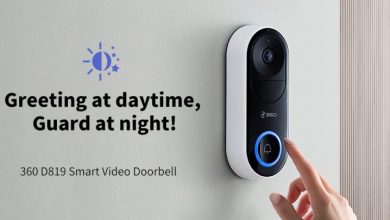 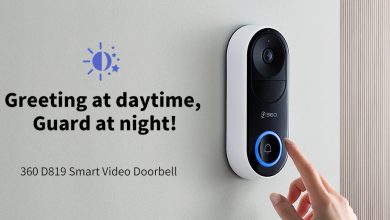