The release of Intel’s 12th Generation CPU at the end of last year, also officially brought the PC field into the DDR5 era. After the embarrassment of the high price of D5 memory in the early days + the shortage of goods, the price of mainstream DDR5 memory has dropped sharply, and it has entered the mainstream range where it can be bought. For friends who use the Intel 12th/13th Generation and the Ryzen 7000 Desktop Processor based on the 5nm Zen4 architecture, DDR5 memory is the first choice.

So what advantages does DDR5 have over DDR4 memory? Simply, DDR5 memory has stronger performance, lower power consumption, improved bus efficiency, and 32/40 bits per channel (ECC) also effectively improves the efficiency of data access by the memory controller, reduces delays, enhances reliability, and reduces defect rate. DDR5 memory frequency starts at 4800MHz, and its performance is greatly improved. Then at the same time, the delay also increased. So how to make better use of the performance of DDR5 and improve performance? Especially due to the price factor, many people start with the basic version, how to enhance the performance? Today we are testing the Sabrent Rocket DDR5-4800 MHz U-DIMM memory. We have received here two 16 GB modules to form a 32 GB kit. 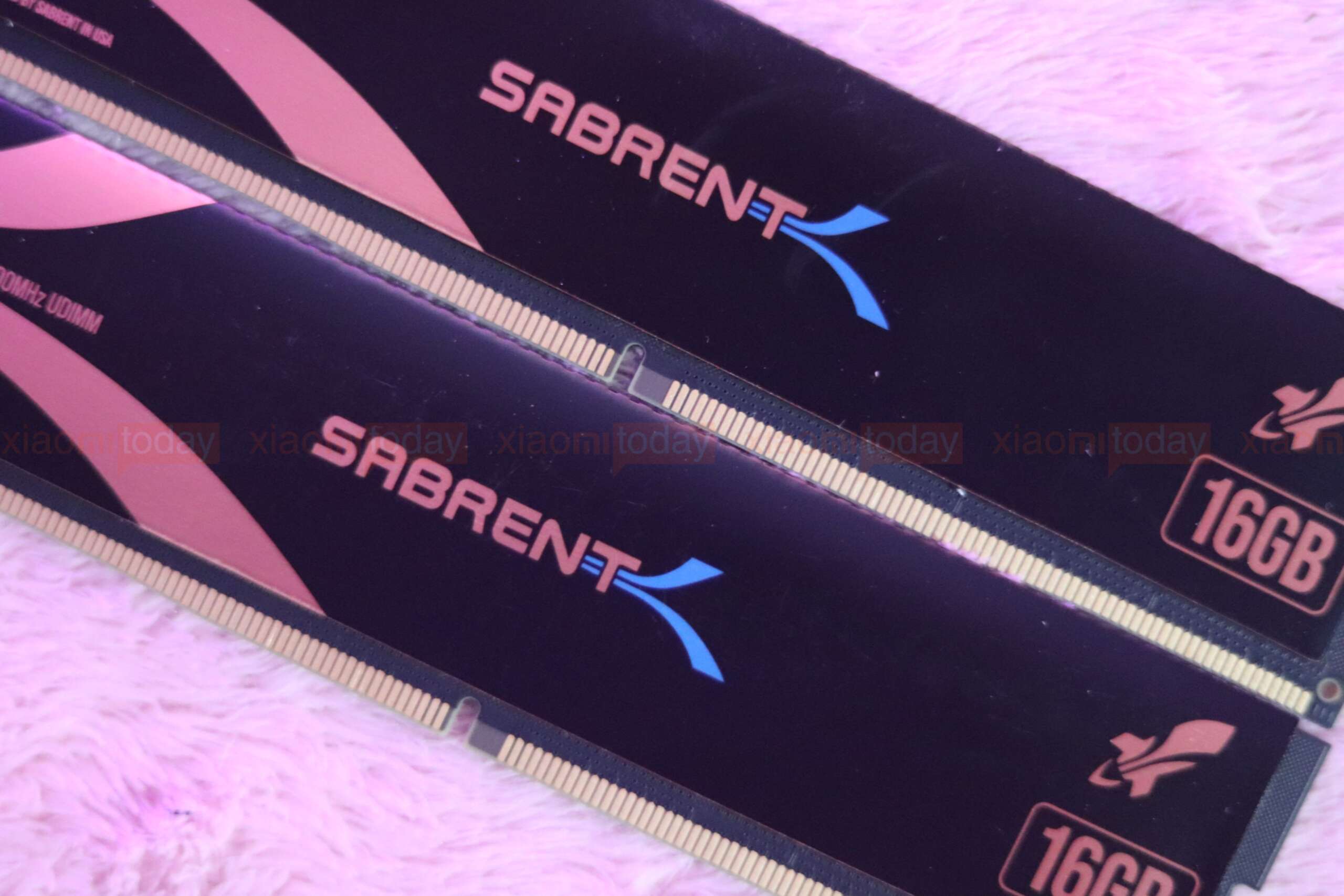 Sabrent is a well-known brand in the computer hardware industry, known for producing high-quality and reliable products. One of their latest offerings is the Sabrent Rocket DDR5-4800 32GB kit, which is a top-of-the-line memory solution for high-performance PCs. The Sabrent Rocket DDR5-4800 kit comes with two 16GB modules, giving you a total of 32GB of memory. This memory is designed to run at a fast speed of 4800 MHz, which is perfect for demanding applications and tasks that require a lot of memory. It is also compatible with the latest Intel and AMD platforms, making it a versatile choice for any system. One of the standout features of the Sabrent Rocket DDR5-4800 memory, it can be easily overclocked to DDR-6200 and also looks very interesting.

Sabrent Rocket DDR5’s low latency helps improve the overall performance of your system. It also has a sleek black design with a heat spreader that helps keep the memory cool under a heavy load. In terms of reliability, the Sabrent Rocket DDR5-4800 has undergone extensive testing to ensure that it is of the highest quality. It comes with a 5-year warranty through Registration, giving you peace of mind that you are investing in a product that will last for many years to come. 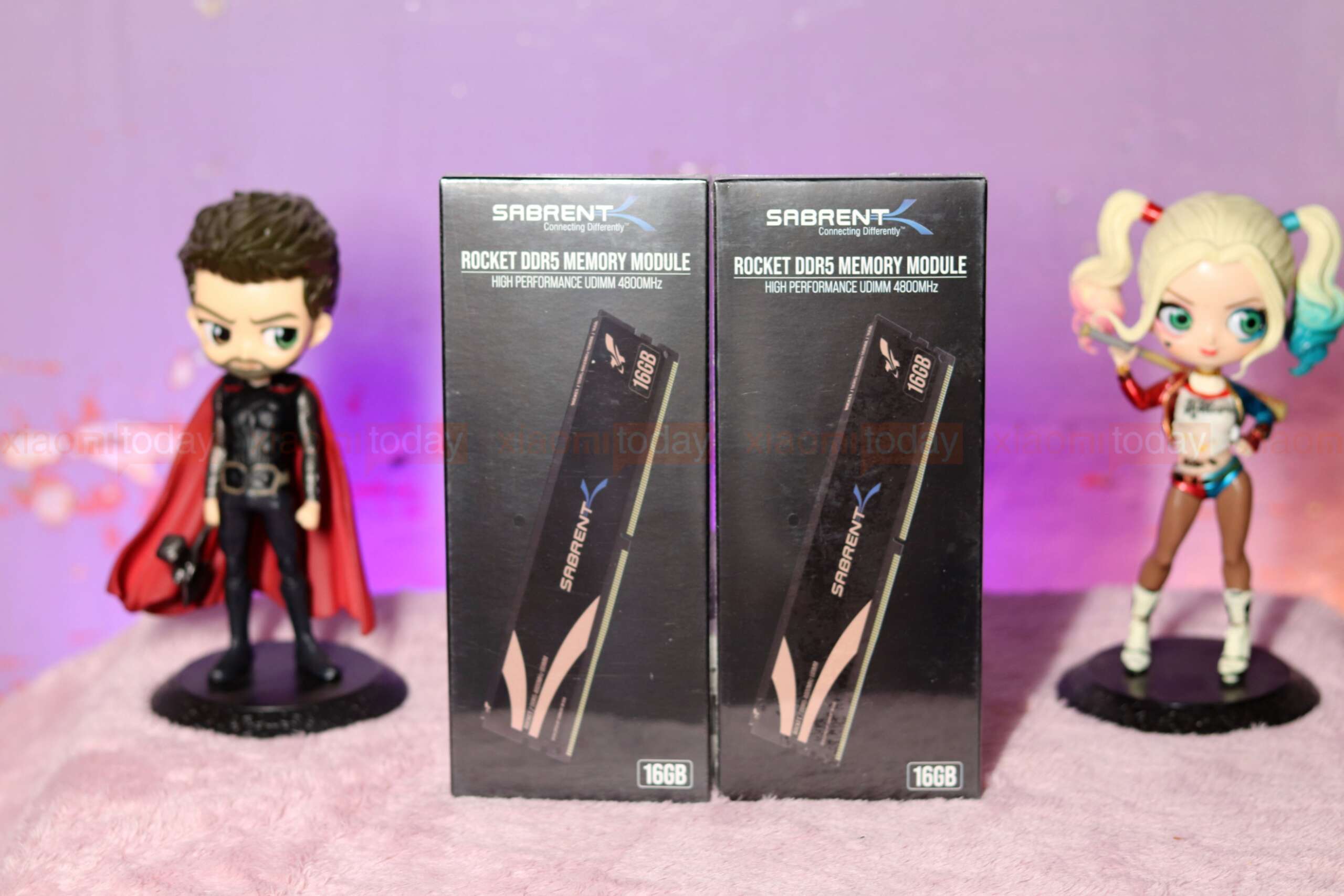 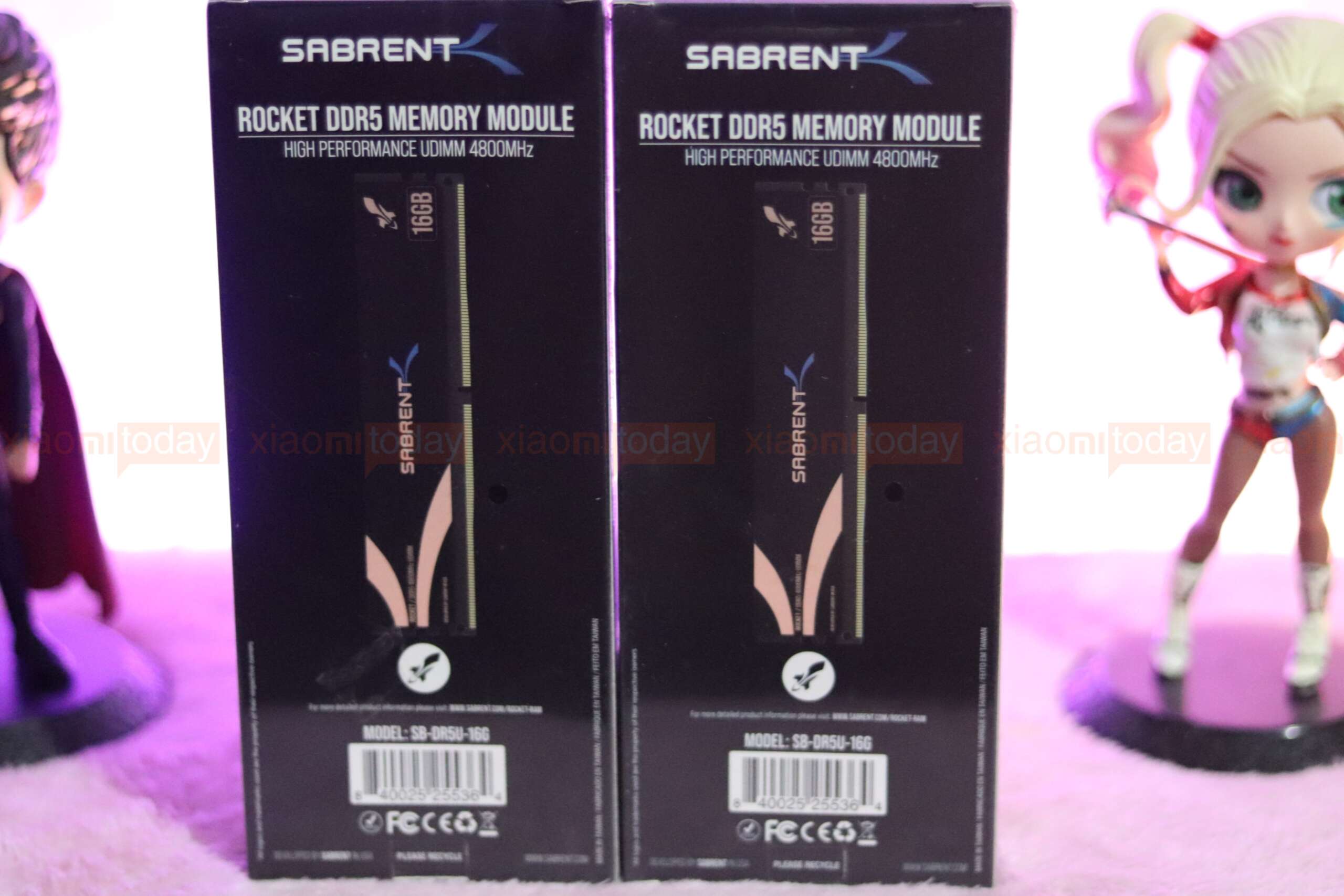 The packaging from the back side does not differ from the front side with the same information and memory image, only the serial number of the product is added to them. 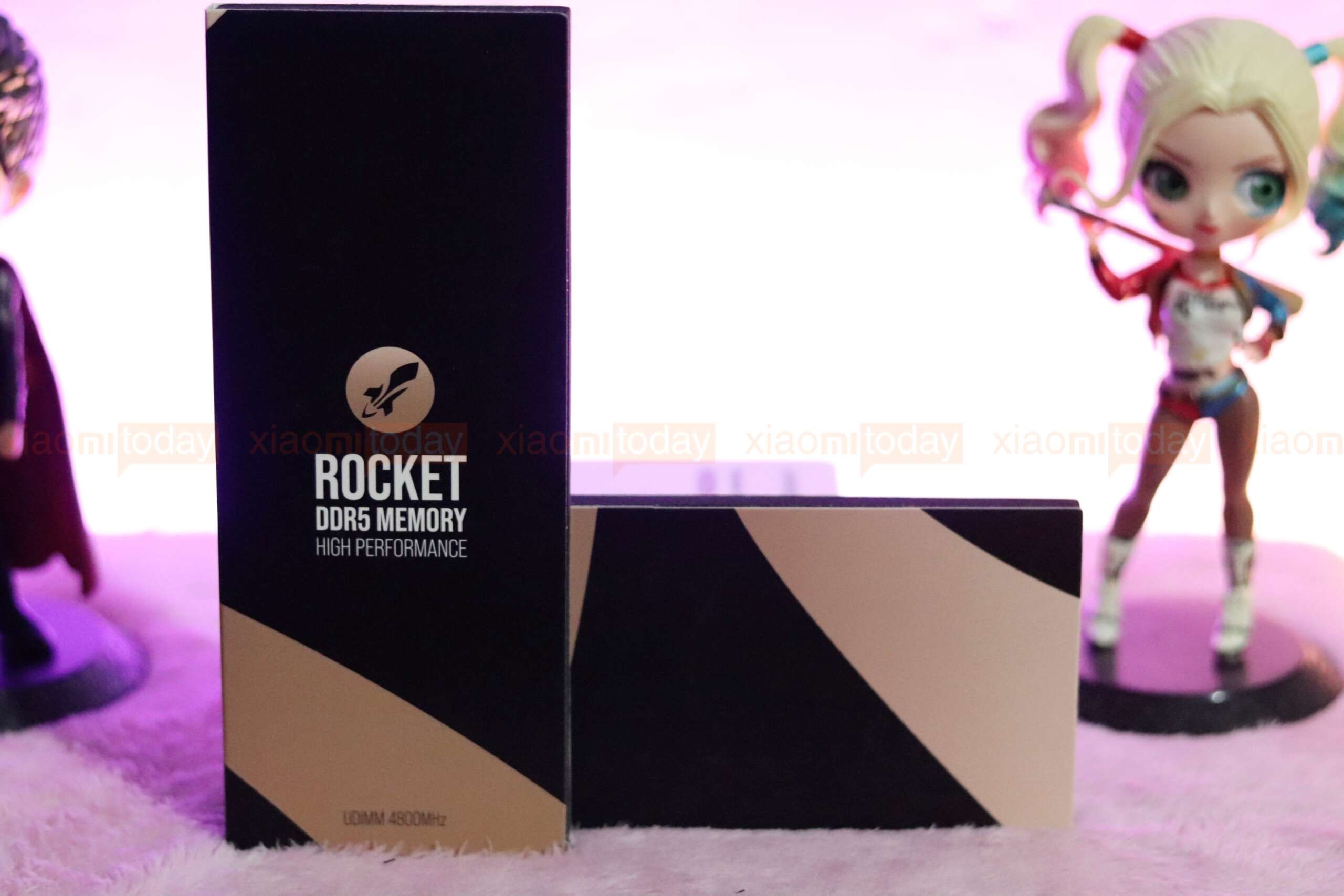 Sabrent Rocket DDR5 memory comes in an elegant inner cover made of cardboard in a wonderful way instead of using plastic cases, and Sabrent is distinguished by its attention to packaging its products well so that it reaches users without any damage. 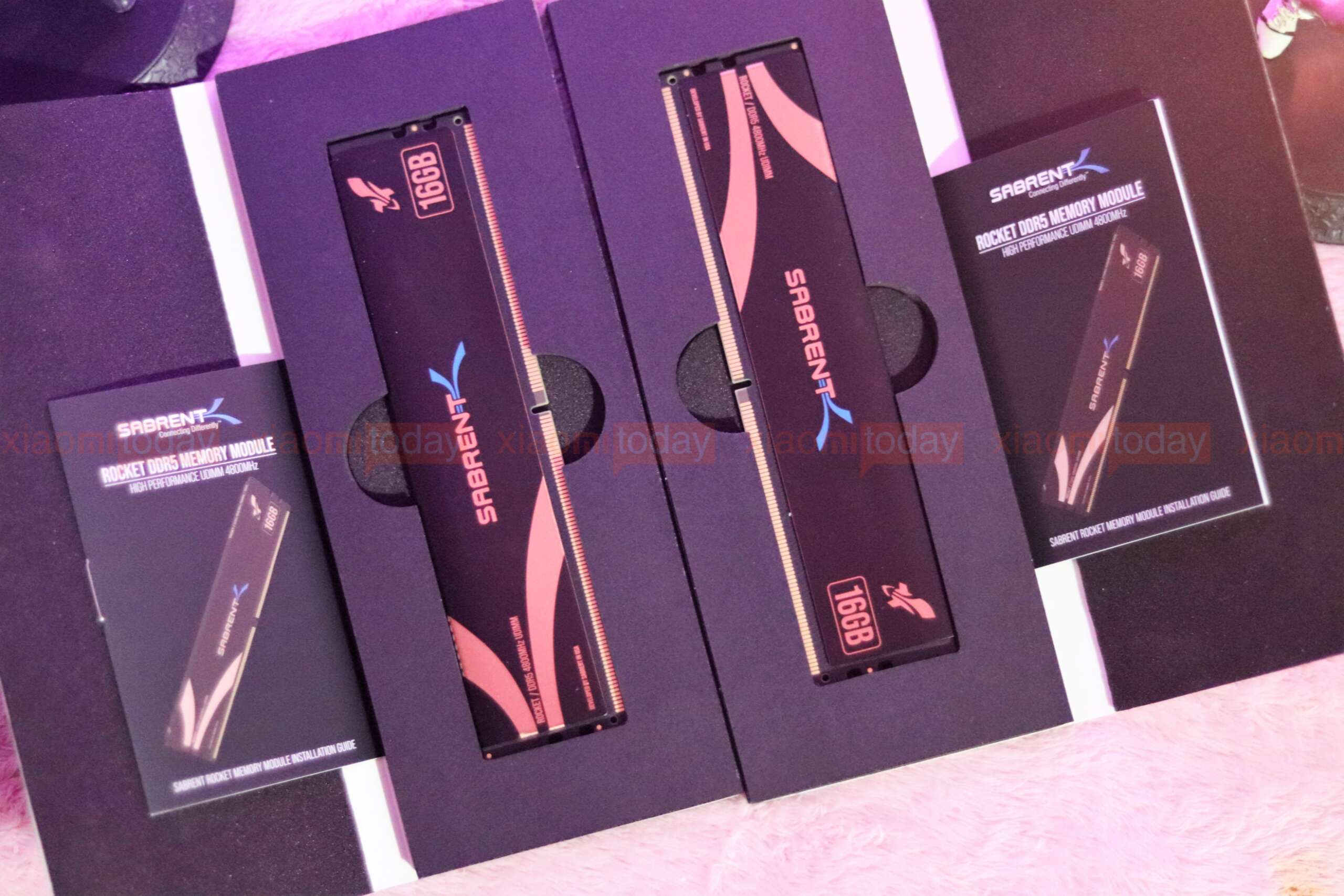 And here, after opening the box, we see the Sabrent Rocket DDR5 memory stick surrounded by a layer of sponge for protection, in addition to the instructions manual. 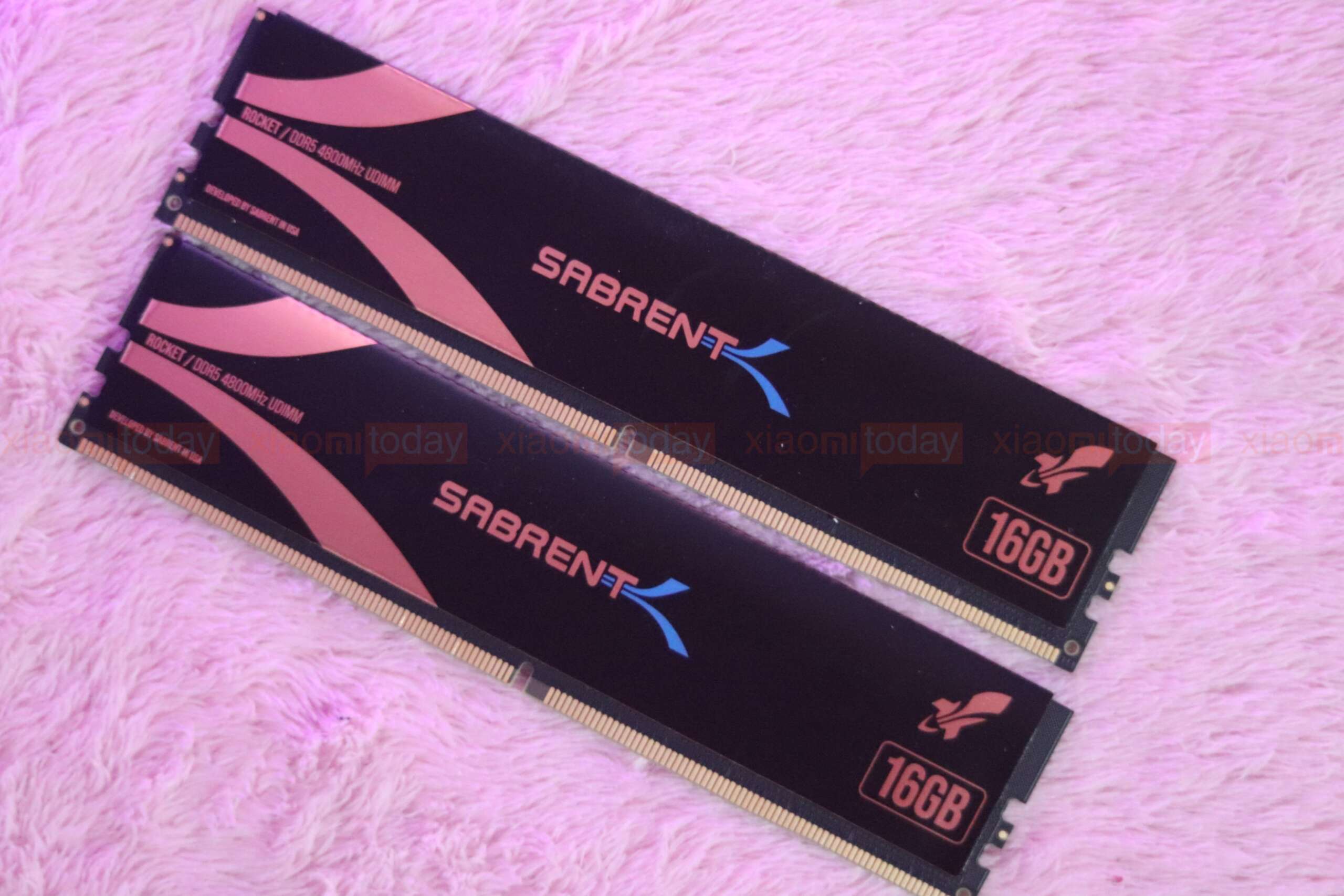 The memories come in black with golden lines, and on the front, we find the company’s logo in addition to the space and frequency that it comes with. Sabrent remains particularly simple and uses the same idea as for its SSDs. Indeed, we don’t have an aluminum heatsink, but a simple thin sheet of copper covering both sides of the module going over the top as well. This copper sheet features a print with a black background and touches of copper colors reminiscent of the Rocket SSD range. This allows a minimum of cooling while sporting a design that is not too raw with visible components. This a relatively important aspect at a time when many choose their materials also according to design. 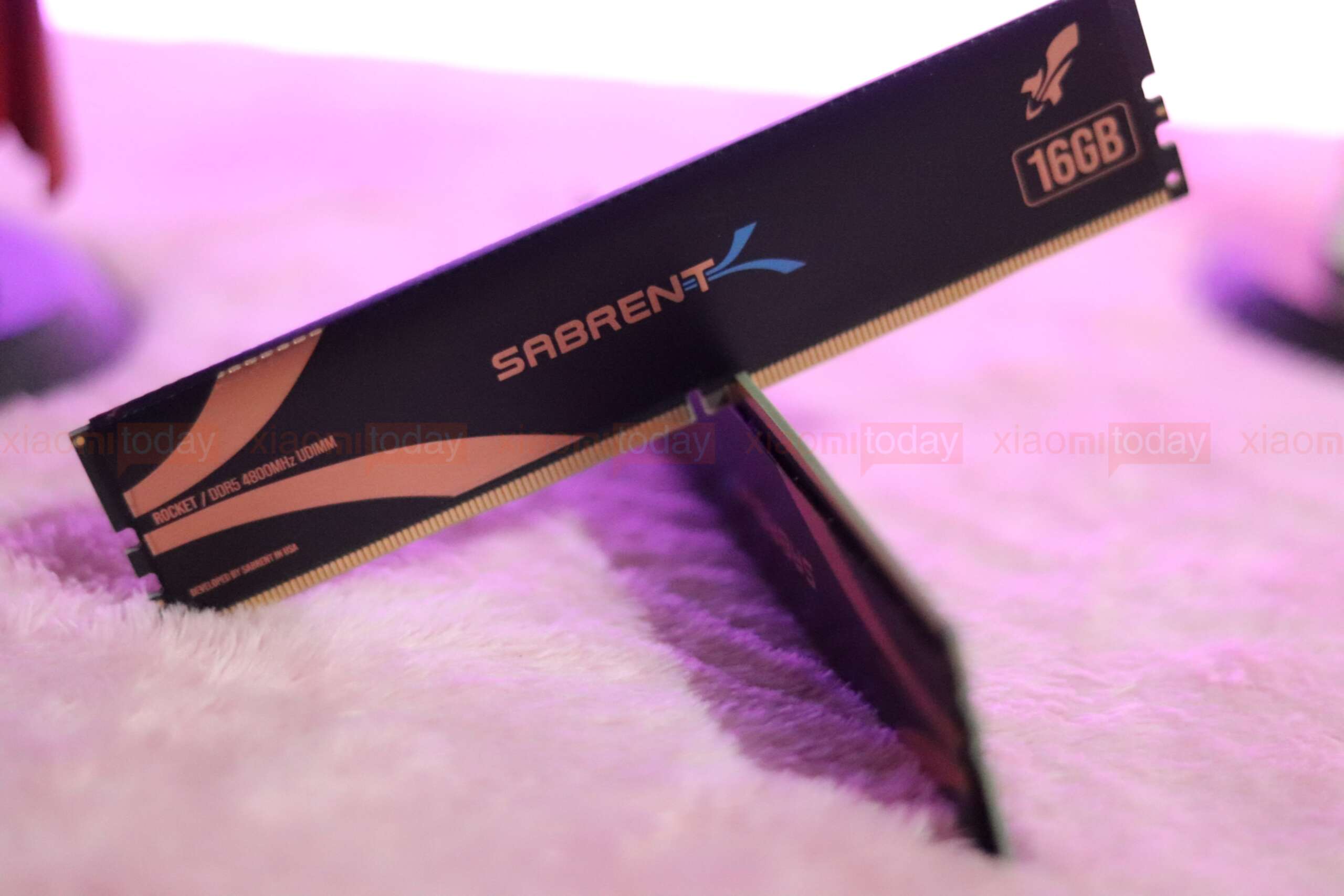 The weight of one memory unit is close to 20 grams and can withstand temperatures up to 85 degrees. The memory comes with a length of 133.60 mm, a thickness of 3.31 mm, and a height of 31.8 mm, which is a wonderful height with the installation of large air coolers or even inside small boxes and a suitable height that does not cause conflict with air coolers. 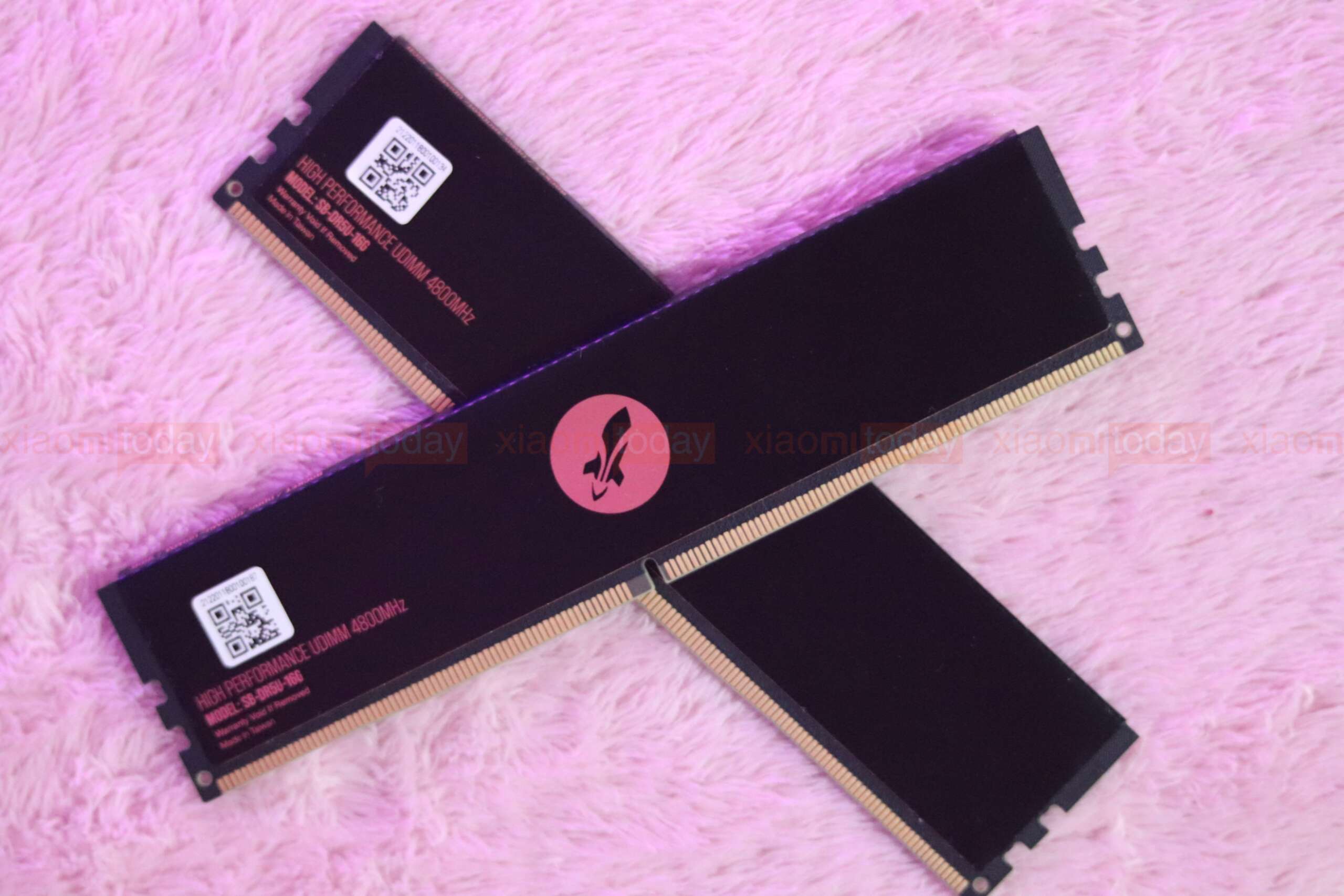 On the other side, there is a sticker that contains the serial of the memory and the frequency that it comes with for a frequency of 4800 MHz and the timings CL40-40-40-77 and that the memories were made in Taiwan and the timings are not mentioned in the sticker or on the memory box, the memories come with Hynix chips that provide DDR5 memory sticks High performance and great overclock-ability, unlike Micron chips, which are currently limited with initial releases, but they come in a lower class than similar Hynix or Samsung chips. 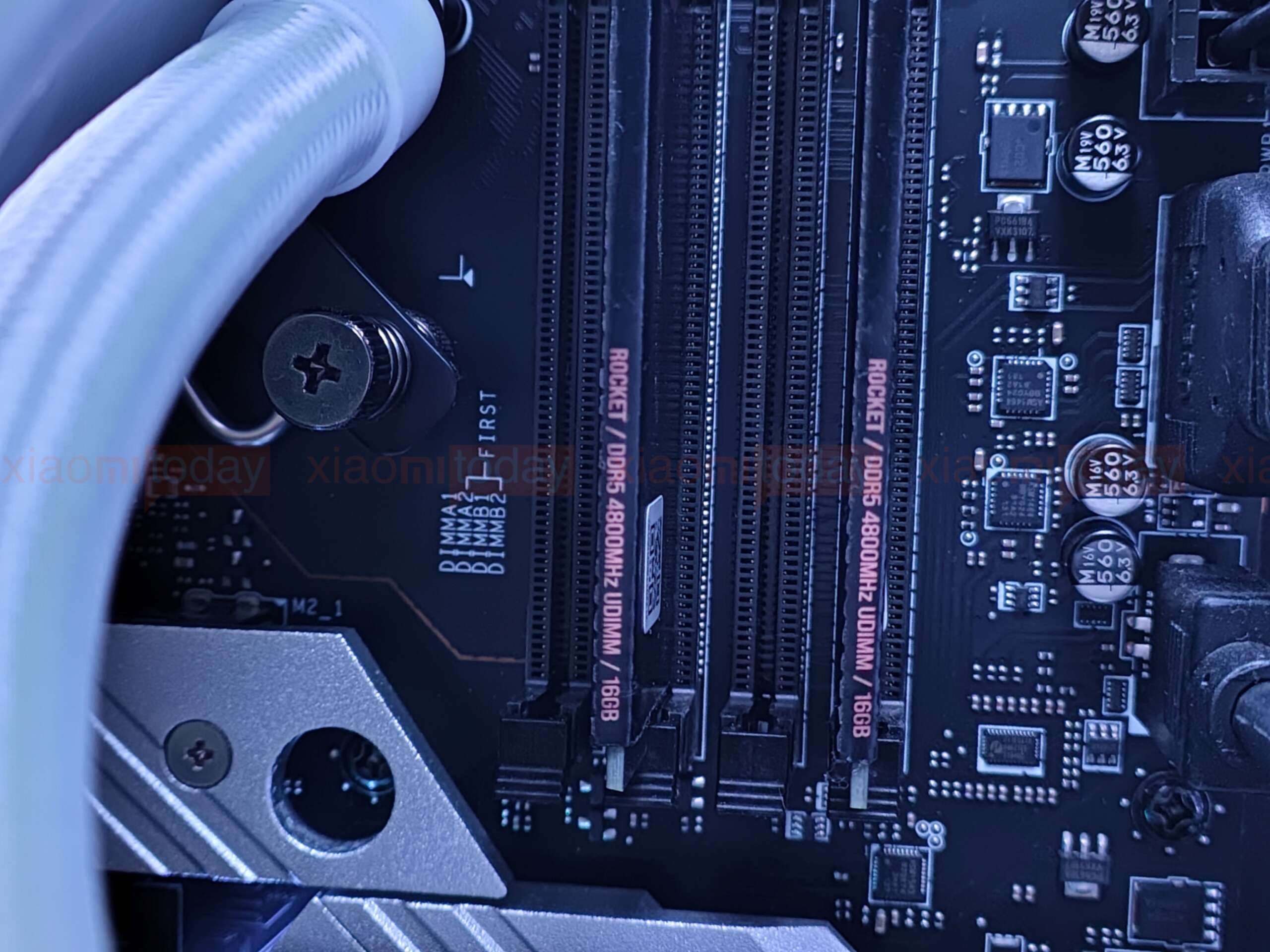 In terms of the test platform, in order to give full play to the strength of the high-frequency D5 memory, the support of the motherboard is definitely indispensable. So we used a new test platform, consisting of an Intel Core-i7 12700K processor with an MSI MPG Z690 FORCE WIFI DDR5 motherboard. The test starts from the default memory frequency of 4800MHz and overclocked to 6200MHz, and tests the bandwidth and delay of the memory. 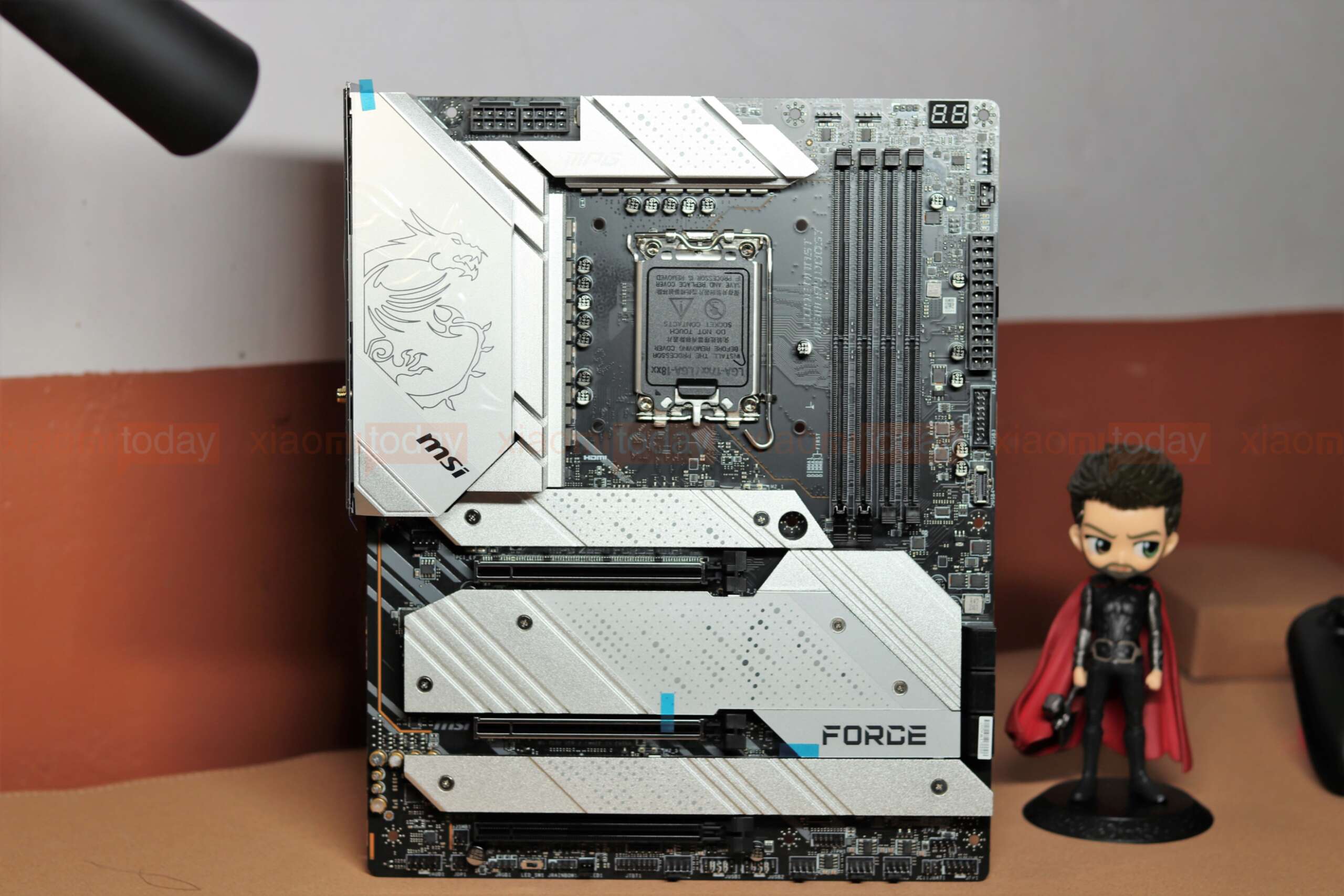 This motherboard not only supports DDR5 memory, but also as the sub-flagship product in the MSI Z690 series, can be said to meet the needs of 99% of users, and I personally think the appearance is quite high. In terms of memory support, SMT (Surface Mount Technology) welding process is used to reinforce the DDR5 memory interface. The official nominal support is up to 6666 MHz. There is still room for the 6000 MHz memory we are testing today, which is very stable. Among the 4 slots, it is recommended to use slots 2 and 4 first, which should be the consensus of the industry.

In terms of other components, The CPU is Intel i7-12700K! the graphics card is PNY GeForce RTX 3070 Ti 8GB VERTO™ Triple Fan! the AIO Liquid Cooler is T-FORCE SIREN GD240E ARGB AIO, and the PSU is DeepCool’s PQ850M (80 PLUS Gold Certified). 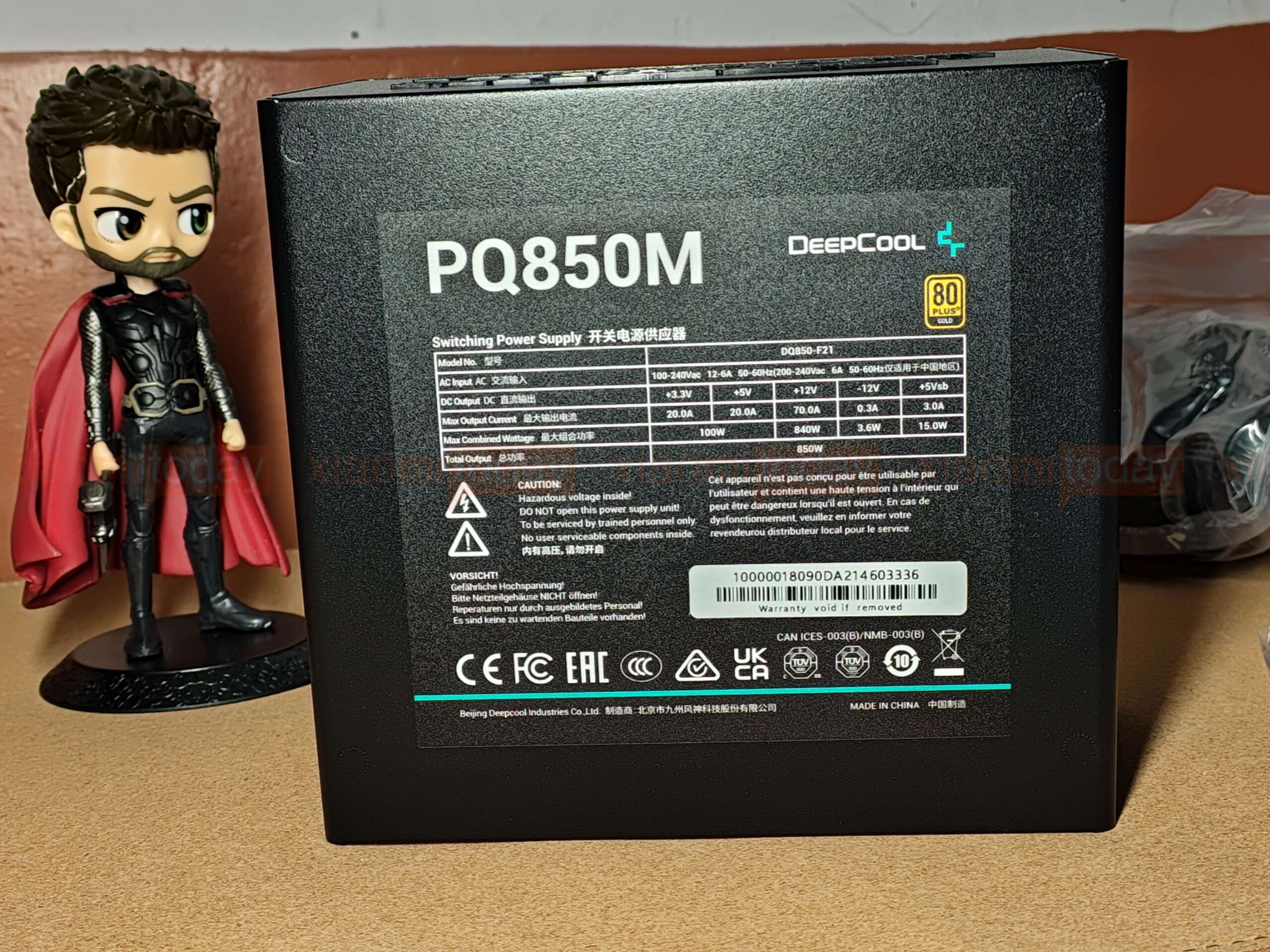 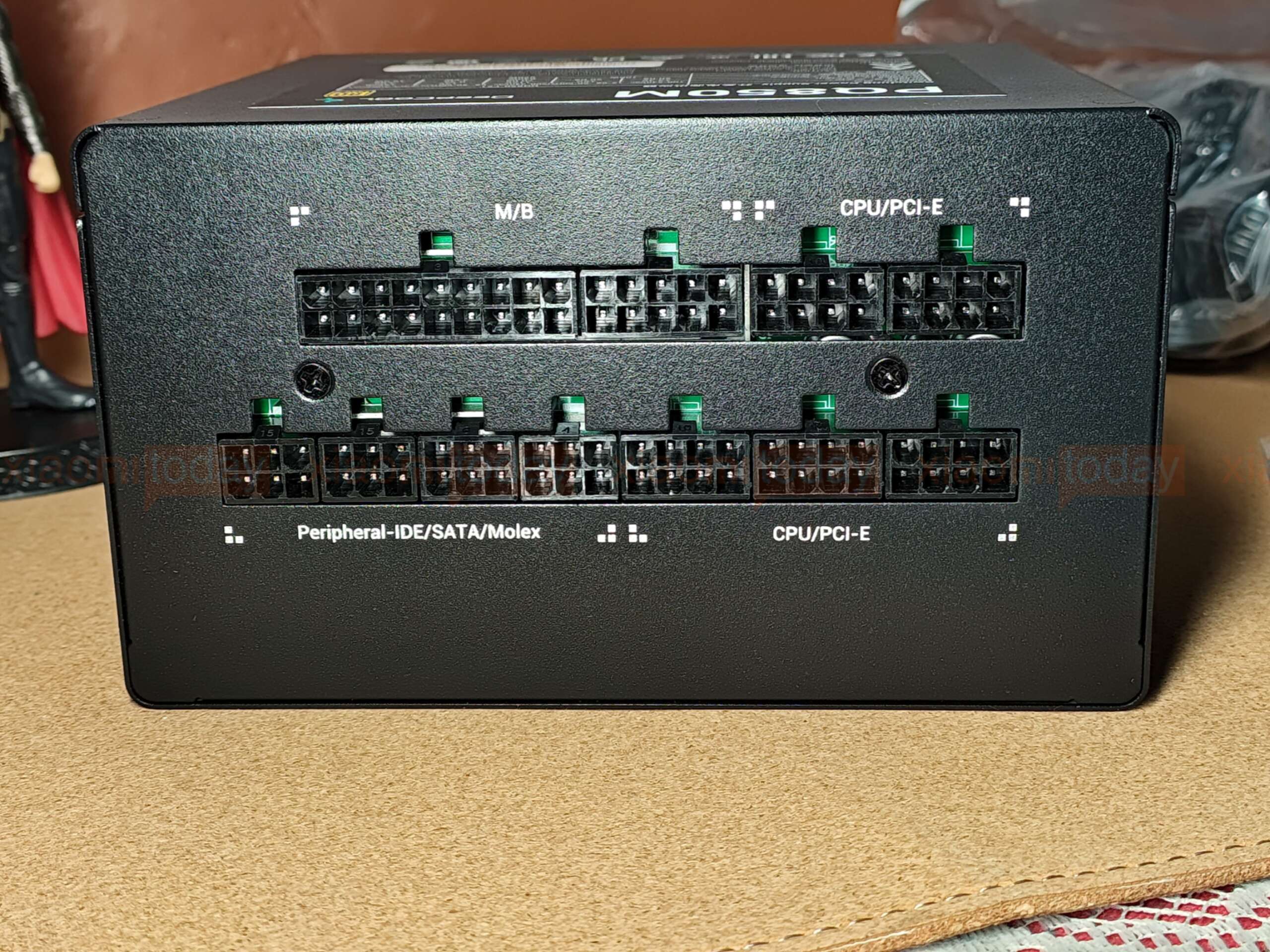 This power supply adopts a full-module design, so the connection is relatively simple! and the entire desktop is relatively tidy when building a test platform. In addition, the whole series is equipped with Japanese capacitors as standard, gold certification + high-end design that supports Hybrid Mode! and the power supply fan will stop when the daily low load is running, and the quality is very good. Moreover, there is also a 10-year after-sales guarantee that only replacements are not repaired.

To test this memory kit, we will use the following configuration:

The memories contain memory chips produced by Hynix, numbering 8 pieces, each piece is 2 GB! and the memories come with a basic frequency of 4800 MHz, with a voltage of 1.1, and timings CL40-40-40-77. Yes, the timings are high compared to the DDR4 memories! but they are essential to reach low voltages and high frequencies at the same time! break The speed of the Hynix chips is much better than the Micron chips! that are currently in memory with a frequency of 4800 or 5200 MHz due to their presence in a high-price category for the Hynix chips, which is different here from the Sabrent Rocket memories.

With our experience, we got from a frequency of 4800 MHz to 6200 MHz with a voltage of 1.45 and provided wonderful stability with low timings of 30-36-36-38, which are wonderful timings and close to what we have reached with high-performance memories, temperatures with overclocking reached 64 degrees, which is expected with a light-sized dispersant, to reduce the temperature to approximately 57 degrees with the use of A simple fan attached to the memory at a speed of 1200 laps, and in the absence of good cooling inside the box, do not expect high frequencies if the temperature reaches more than 60 degrees and instability with a voltage of more than 1.45 with the possibility of reaching a frequency of 6000 MHz at times CL40 and 1.25 volts.

There is space in the memory to store the user’s presets to be activated when moving to any platform! or without worrying when updating the motherboard Bios about losing the memory numbers! and also to share these settings easily with other users around the world which is called XMP 3.0, what distinguishes DDR5 memories from DDR4 memories It is the presence of PIMC! which is a unit responsible for supplying power to memory away from the motherboard! which provides better communication between the chipset and the power unit to reduce losses in the electrical signal and thus the ability to reach better frequencies with the development in the DDR5 industry.

After booting up, you can see the presets in the SPD of this memory through CPU-Z. It also identifies the type of chips used by the manufacturer (Samsung, Micron, and Hynix). To do this, you must consult the Memory and SPD tabs. For our Rocket DDR5 16 GB DDR5 4800 MHz CL40 module, CPU-Z tells us that the chips used are “Hynix”.

The memory runs at the JEDEC standard 4800 frequency, which is also the frequency of most cheap DDR5 at present. DDR5 already has a good read and write speed at 4800-C40. The CPU-Z memory information shows that the memory complies with the basic standards in the JEDEC DDR5 specification! and regarding the memory settings, the memory does not even have an XMP profile. At this basic frequency, the memory still has a decent throughput of almost 74GB/s. Compared to DDR4 memory at a frequency of 3600MHz, this is a relatively big leap.

And now we see the results of the comparisons, the test starts from the default memory frequency of 4800MHz to 6200MHz, and tests the bandwidth and delay of the memory. 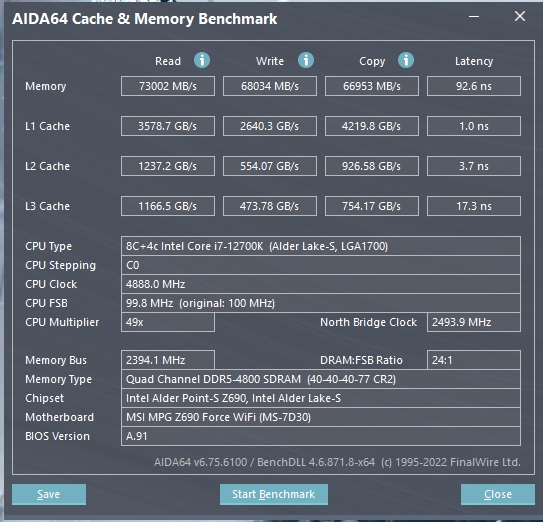 After the manual overclocking of this set of memory, the memory frequency is increased to 6000MHz! and the read/write speed is between 91881~83246MB/s, the memory delay is 70.3ns.

It can be seen that in terms of overclocking performance! this set of Sabrent Rocket DDR5 memory is still very reliable.

Sabrent’s introduction of the Rocket DDR5 memory marks its debut in the memory production industry. This move by Sabrent is seen as a great achievement! as they have used Hynix chips to create low-frequency memory without an XMP profile. The memory operates at the standard frequency of mainboards! with a constant voltage of 1.1, and does not come with professional heatsinks or RGB lighting. The Rocket DDR5 2×16 GB memory kit, which was rated at 4800 MHz! exceeded expectations in our tests by reaching a frequency of 6200 MHz through overclocking. Not only did it surpass the 6200 MHz barriers! but we were also able to lower the memory timings to 30-36-36-38. The tests showed a significant improvement in memory performance, with a 13% increase over the basic frequency.

Despite the absence of specialized heatsinks on the memory, Sabrent’s cooling solution – a copper foil sticker similar to those used on their solid-state drives – effectively kept temperatures safe. Even under maximum test conditions and with overclocking, the memory reached a maximum temperature of 51 degrees Celsius. This is thanks to the use of air cooling for the processor! which provides a steady flow of cool air to the memory for optimal cooling efficiency. At the time of writing this review, the Rocket DDR5 2×16 GB memory kit is being sold for $259.98 on Amazon.

Although DDR5 memory is relatively new and still quite costly! Sabrent has managed to create a high-performing group of memory by utilizing standard frequencies for Intel motherboards and incorporating Hynix chips! that allow for significant overclocking and low timings. If you’re new to overclocking, you’ll be pleased to know that it doesn’t require a lot of effort. Many modern motherboards that support DDR5 memory come with automatic overclocking settings! which allows you to easily select the best frequency for your specific memory chip and motherboard combination.