On the market there are numerous cheap gaming controllers, the one we want to talk to you about today despite having a low cost is of high quality, and produced by a company specialized in the sector, we are referring to the EasySMX ESM-9110 Controller. EasySMX once again delights us with its EasySMX EMS-9110 controller, which at an affordable price allows us to enjoy any game on a multitude of platforms, from a PlayStation 3, Nintendo Switch, Android devices, and a PC; all with your wireless or wired connection. A complete controller, with all the functions and much more, learn more about the EasySMX controller with our review (Thanks to EasySMX for Providing us).

As usual, we will talk about the content of the packaging and what we are going to find inside it. The gamepad is packed in two cardboard boxes. The outer box is glossy with an image of the ESM-9110, its main characteristics, and the contact details of the manufacturer. Inside there is another cardboard box in which the delivery set is fixed. 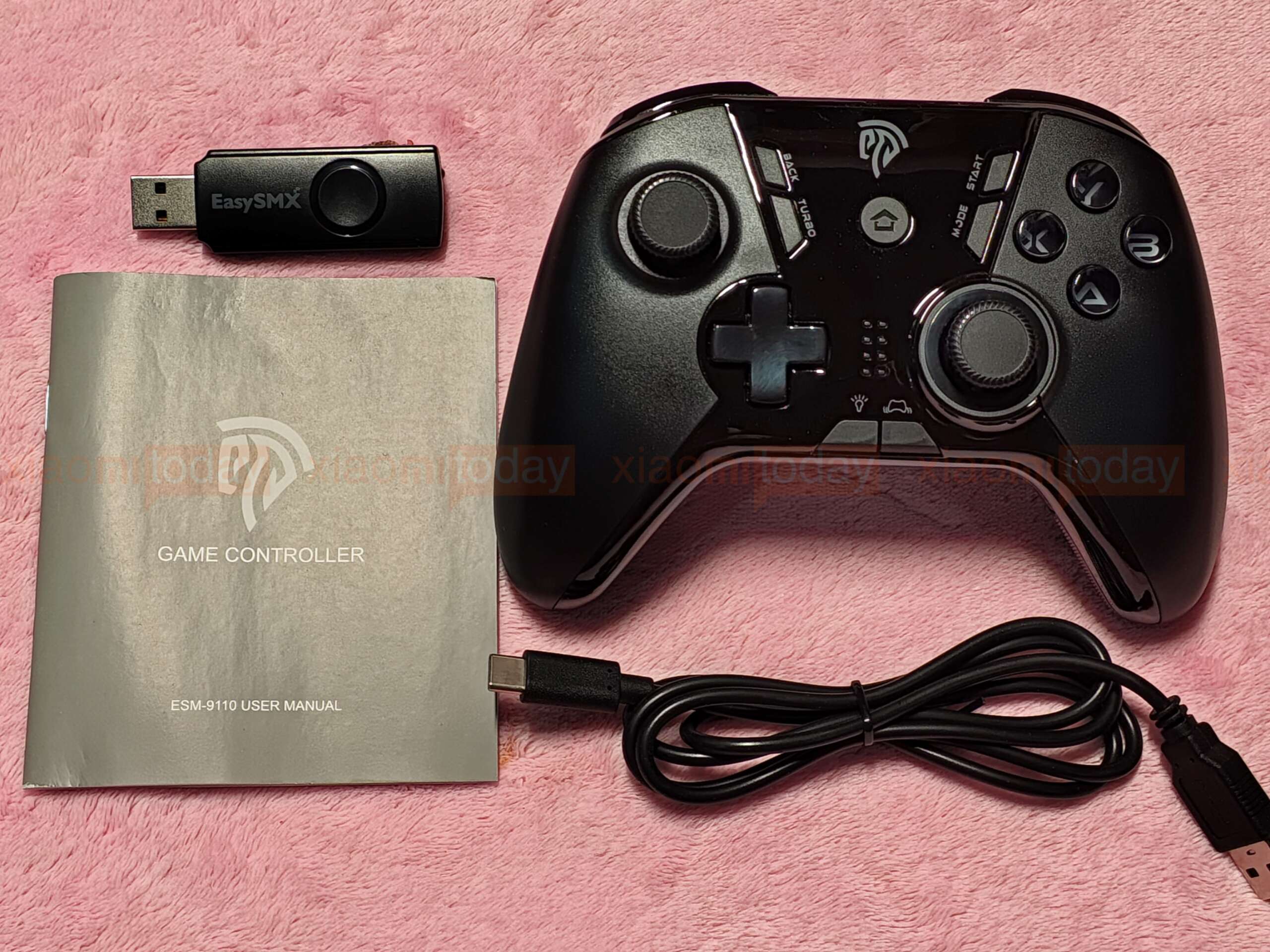 Inside the box, you will find the EasySMX EMS-9110, the USB-A to USB-C cable, the USB adapter, the instruction manual, and a small thank-you note for purchasing an EasySMX product. 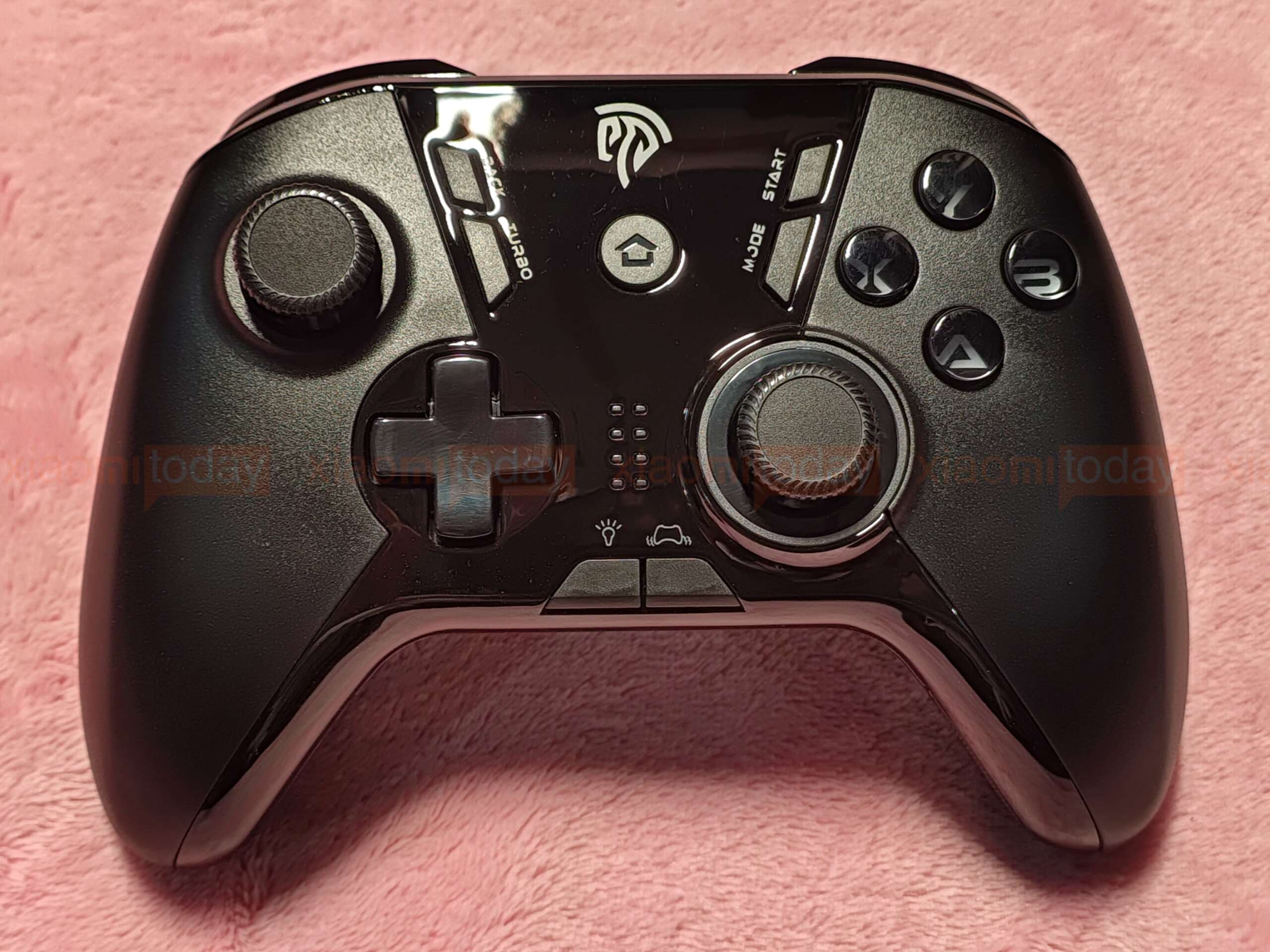 The design of the EasySMX ESM-9110 controller stands out for having the typology of the controller of the Microsoft console controllers. The entire controller is made of high-quality plastic, except for the sides of the controller, which are dotted for a better grip on the hand. The body is made of black plastic. The top of the case is completely glossy and instantly picks up fingerprints. The side parts on which the A, B, X, and Y buttons and the right analog stick are located are covered with removable matte overlays. On sale, there is a version of ESM-9110 with overlays on which a colored abstraction is depicted.

The following buttons are located in the center of the front side of the gamepad: 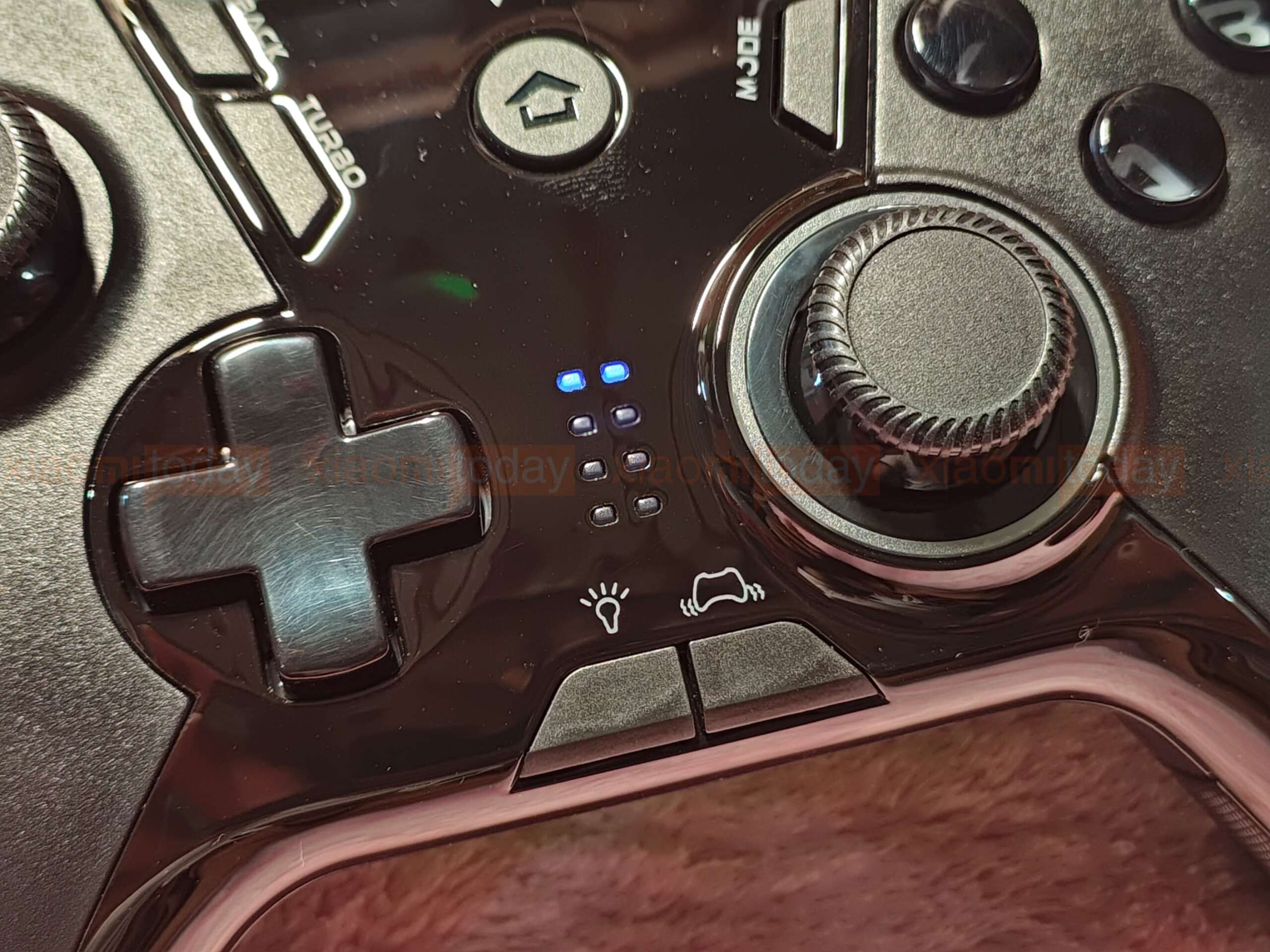 The front side also contains the following controls:

Buttons A, B, X, and Y are made of transparent acrylic. They and the right analog stick light up. 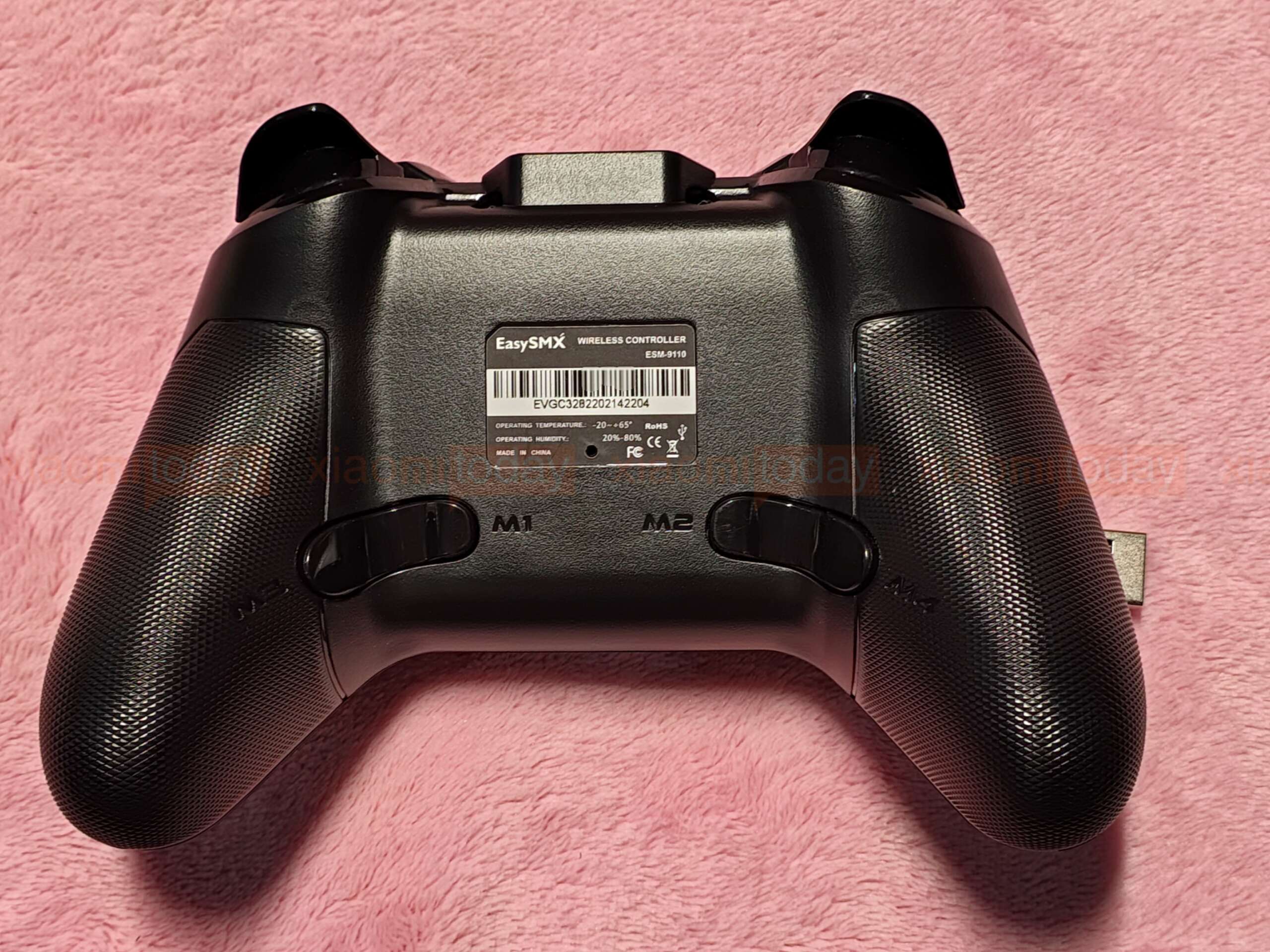 On the back of the EasySMX ESM-9110 gamepad there are four programmable buttons M1 … M4, by default these buttons duplicate the buttons A, B, X, Y. At the end there is a USB Type-C connector for charging and wired connection of the gamepad to devices. Above the connector is a red LED that lights up during charging and goes out after it is finished. 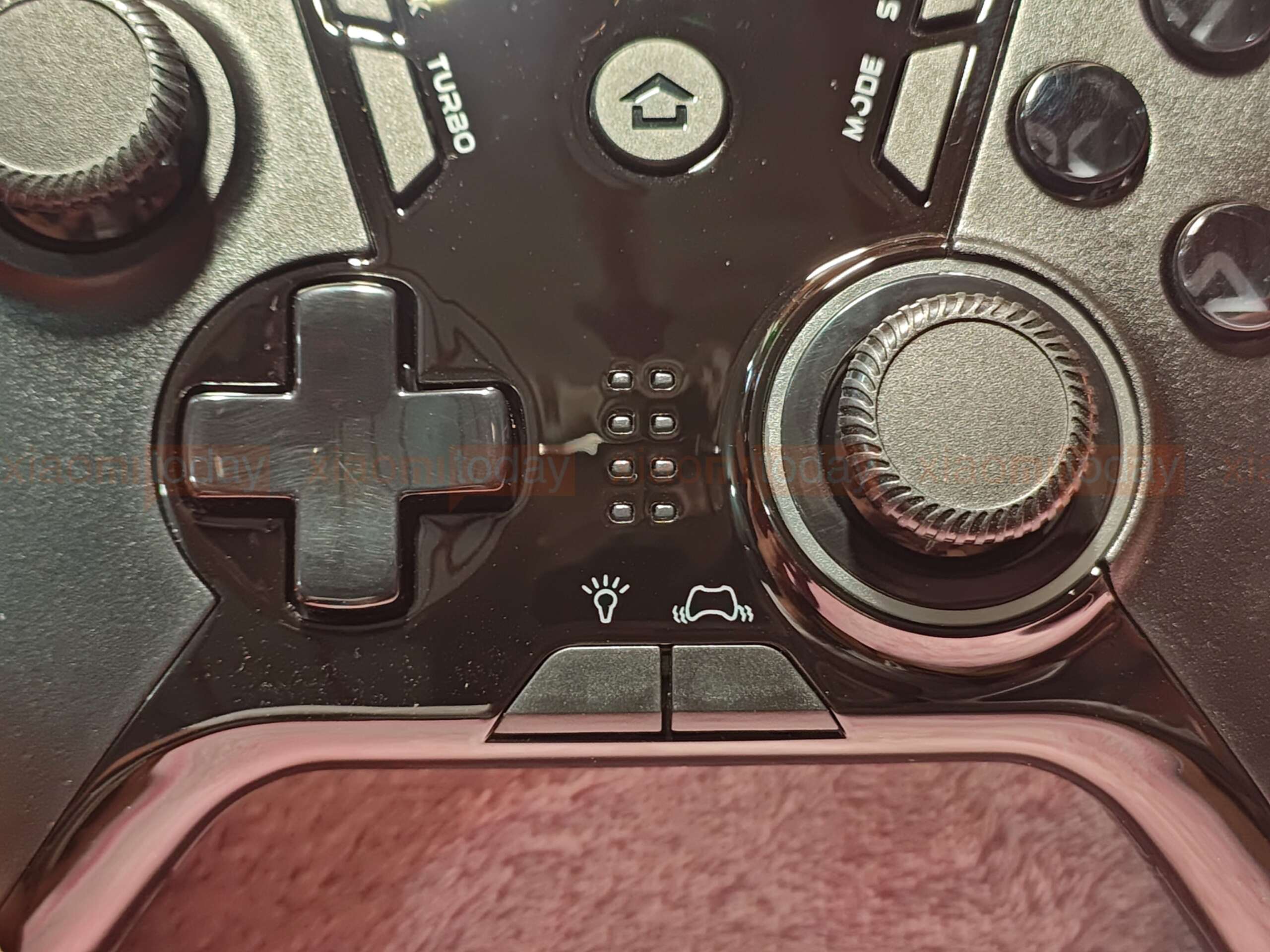 Between the right stick and the D-pad, there are two additional keys with icons. One is responsible for changing the brightness of the backlight, and the second for the degree of vibration. Above, you can see 4 rows of LED indicators, they perform several functions. Firstly, they show the type of connection, and secondly, they signal the discharge of the device’s battery. 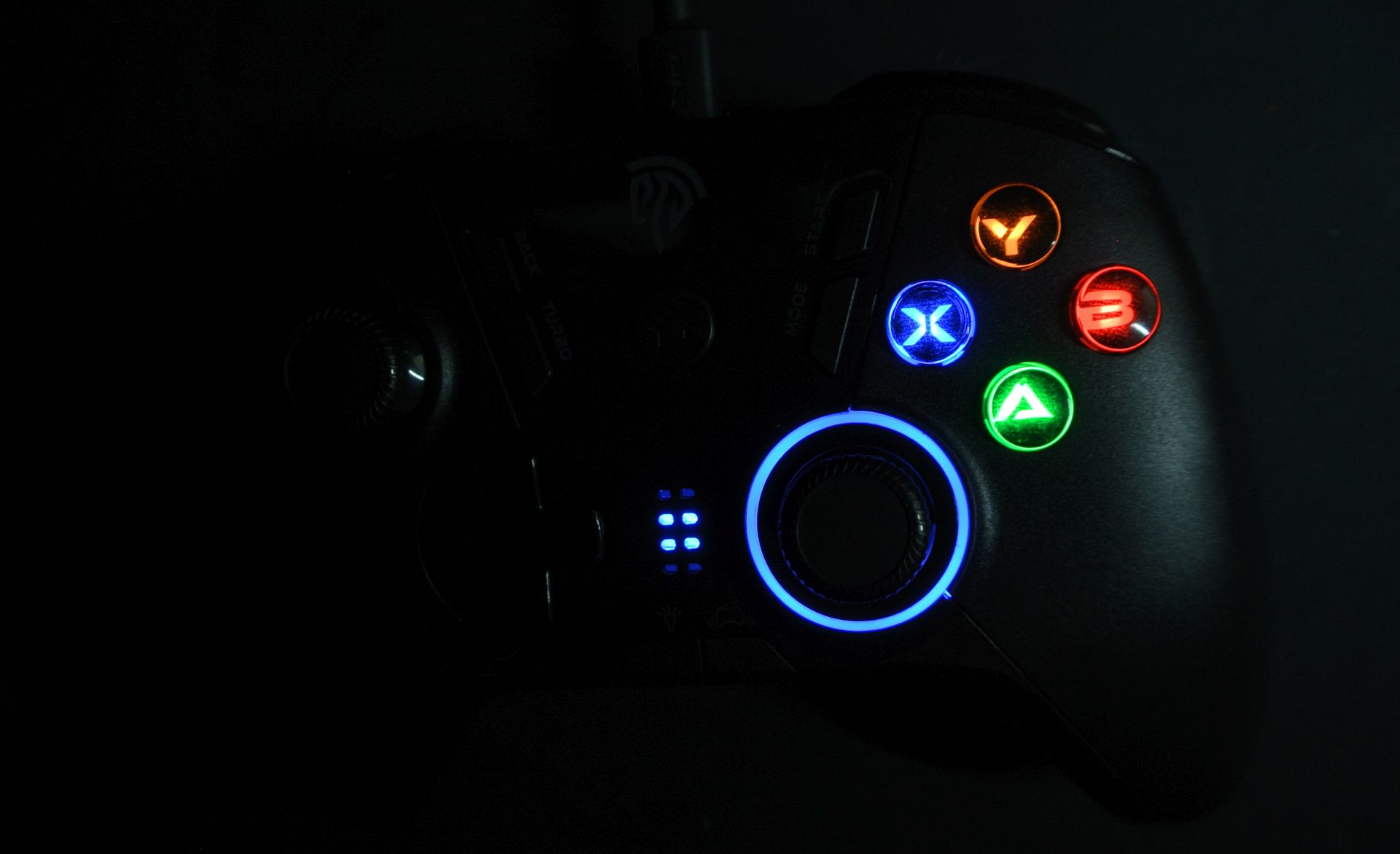 By the way, since we started talking about the backlight, this is how it looks in the dark. In total there are 4 levels of brightness or a complete shutdown of the backlight.

I would like to draw your attention to the fact that the supplied Type-C cord is only suitable for charging, it does not contain signal lines. If you want to connect the gamepad with a wire, you will have to use a third-party full-fledged wire.

All buttons and the D-Pad are pressed quite softly, analog sticks have a smooth ride. Stick mushrooms are made of plastic. Despite the lack of rubber caps, they are quite tenacious and comfortable to play with.

For programming the buttons M1…M4, you can assign the duplication of any button or the development of a macro (consecutive pressing of several buttons).

To program, do the following:

Ready! If you do everything right, then the backlight of the stick from pink will return to blue.

You can reset all settings and macros of the gamepad by pressing the “Reset” button, which is located under the hole on the underside of the gamepad.

You can check how a button or a programmed macro works in the control panel along the path – Control Panel -> Devices and Printers -> ESM GAME FOR WINDOWS  (gamepad icon). Right-click on the icon and select -> Game Controller Settings -> Properties

The gamepad has been tested on PC and Android TV boxes.

When connected to a PC, the EasySMX ESM-9110 gamepad can work in two input standards: 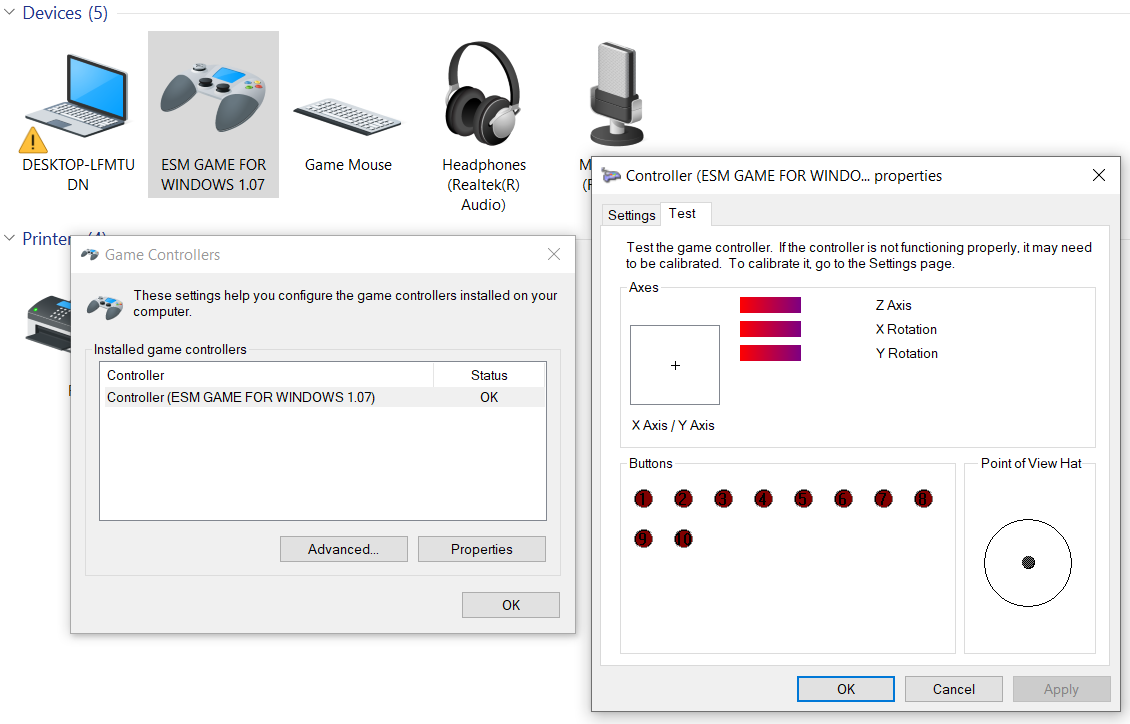 Input standards are switched by holding the “Mode” button. Win 10 defines the gamepad as ESM Game for Windows or ESM gamepad.

The analog sticks are pretty accurate. If you tilt the stick all the way and draw a circle, we get the following picture (screenshot on the left). If you try to draw circles of a smaller diameter, you will get a picture like in the screenshot on the right.

There were no problems in the games. Everything works fine. Combos and fatalities are worked out in Mortal Combat XL, it is convenient to assign macros to programmable buttons M1 … M4. Darksiders, Dirt, and Rayman are quite comfortable to play. Vibration feedback normally works out in scenes where it is provided.

With the android tv box, the gamepad started working immediately after plugging the dongle into its USB port. Using the gamepad, you can control the TV box or play Android games and various simulators.

It was easy to play NES and Play Station emulators (NES.emu, -ePSXe-). The gamepad was defined in the emulators, the controls worked properly.

You can also easily play games from the Play Market with gamepad support. It was quite comfortable to play such games as Dead Trigger 2, Shadowgun Legends, and Asphalt 8. 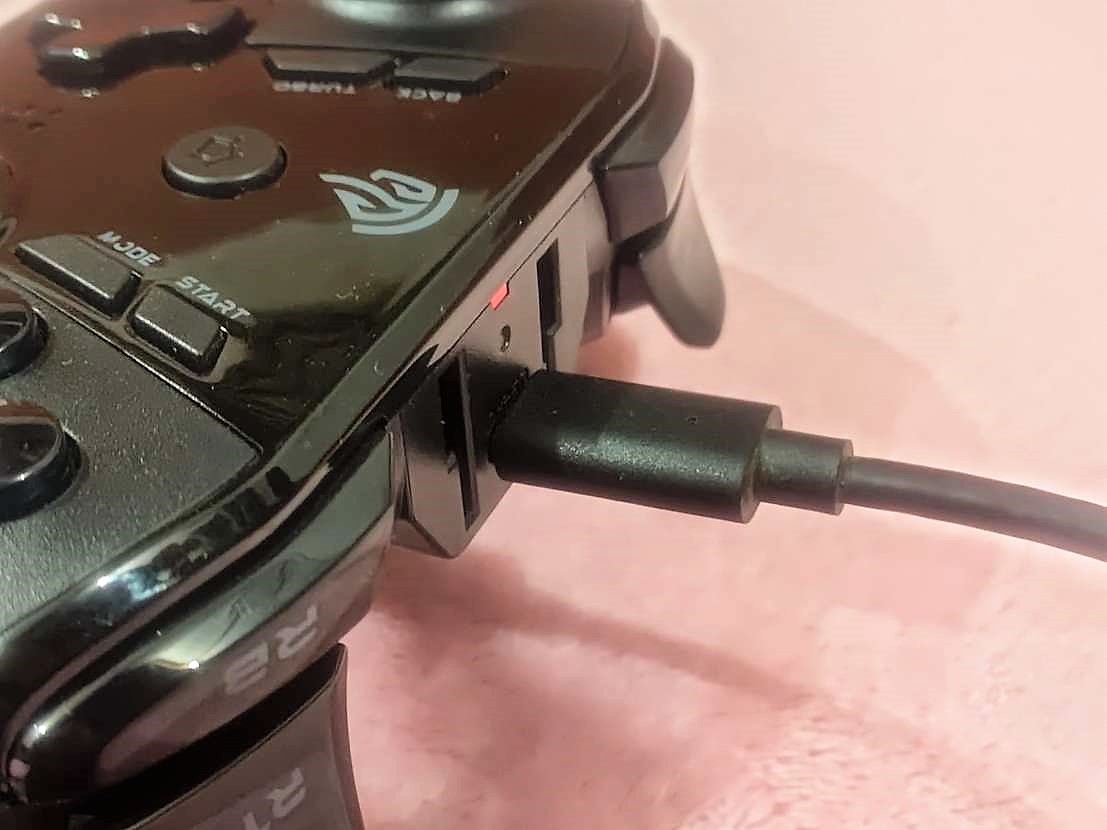 The 8 hours of operation declared in the specifications and even a little more EasySMX ESM-9110 fulfills. When the charge level is low, the LED indicator on the front panel starts flashing and the vibration feedback is turned off. But, even at a low level, the gamepad still works for about half an hour. It takes about 2.5 hours to charge.

I liked the EasySMX ESM-9110, this inexpensive gamepad is powered by a built-in battery that works via a 2.4 GHz RF channel or when connected with a cable. The ESM-9110 may well meet the needs of the not-too-picky gamer.

The advantages of the gamepad include:

The disadvantages include the following: