Union makes force! A saying that we verify again with the collaboration between TeamGroup and Biostar. Which resulted in the new T-Force Delta RGB DDR5 Valkyrie Edition desktop memory. It is worth mentioning that this is the first collaboration of TEAMGROUP’s T-FORCE brand and BIOSTAR’s VALKYRIE series. The design is based on the popular T-FORCE DELTA RGB DDR5 desktop PC memory. Also, its stealth aircraft-influenced appearance features the characteristic wide-angle heatsink with dazzling RGB lightning.

At the top are the iconic T-FORCE wing logos and the classic gold wings from the BIOSTAR VALKYRIE series. The tails also integrate the concept of the majestic wings of the warriors in the form of an aerodynamic design spread across the heat sink. Gamers can enjoy stunning visuals and legendary memory performance as T-FORCE and VALKYRIE take them further into the gaming arena. 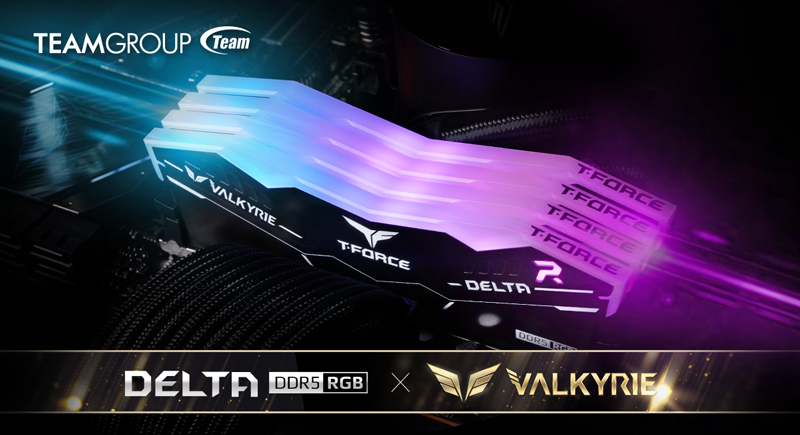 T-FORCE DELTA RGB DDR5 VALKYRIE Edition Desktop PC Memory is equipped with a next-generation RGB intelligent control chip, allowing gamers to use BIOSTAR’s Advanced VIVID LED DJ software to create a unique RGB setup for your PC. With excellent hardware and software support, users can control and synchronize lighting effects the way they want. Making it easy to create a unique look that everyone will admire.

Clock speeds of 5600MHz and 6000MHz with a capacity of 2x16GB and the first batch will be available on Amazon US at the end of October 2022. Stay tuned to TEAMGROUP’s official website and social media channels for the latest updates about the glorious T-FORCE DELTA RGB DDR5 VALKYRIE Edition Desktop PC Memory and its sale information.

Are you ready to enjoy the thrill and performance of overclocking with the new T-Force memory?