It’s not the first similar external drive we’ve tested. SSD technology is becoming affordable, and its massive advantage over mechanical disks is mainly speed but also higher durability. You must be very careful with classic mechanical discs; even so, they have no hope of a long life in an external design. And so, an SSD is a huge benefit, especially if you want a drive on the go. Sabrent recently launched the novelty in this field with the Rocket XTRM-Q, we have its 8TB version, and today we will test it for you because the whole series has a lot to offer. The top is even a 16TB SSD design. Of course, the price is pretty extreme, but luckily there are also more affordable variants.

A manufacturer unknown a few years ago, Sabrent is particularly active on the market, especially for SSDs. After multiplying the references of internal models, the American also invests in the sector of the external disk. The Rocket XTRM-Q Portable SSD is the perfect example of this, with high-performance products with capacities that can go very far. In addition to Thunderbolt 3 external storage devices, this brand provides many PCIe M.2 SSDs, including 8TB capacity products.

Classic external disk drives reach a speed of just over 100 MB/s, which is very little compared to the performance of an SSD disk. In today’s review, I will look at a disk capable of reaching speeds of up to 2700 MB/s through the Thunderbolt 3 interface. It is available in capacities from 500GB to 16TB; I received an 8TB variant for review. Sabrent also offers these drives in designs with QLC (XTRM-Q) or higher quality TLC chips, which are much more suitable for external SSDs that stay longer without power.

The packaging is very neat, with the drive shipped in a hard metal case that protects it well and with a Thunderbolt 3 cable, USB 3.2 A to USB C cable, and silicone protection if you want to transport it. The product arrives as always in noteworthy packaging. The manufacturer has provided a silicone case to protect it from any type of impact; this is an additional accessory that you can buy separately. 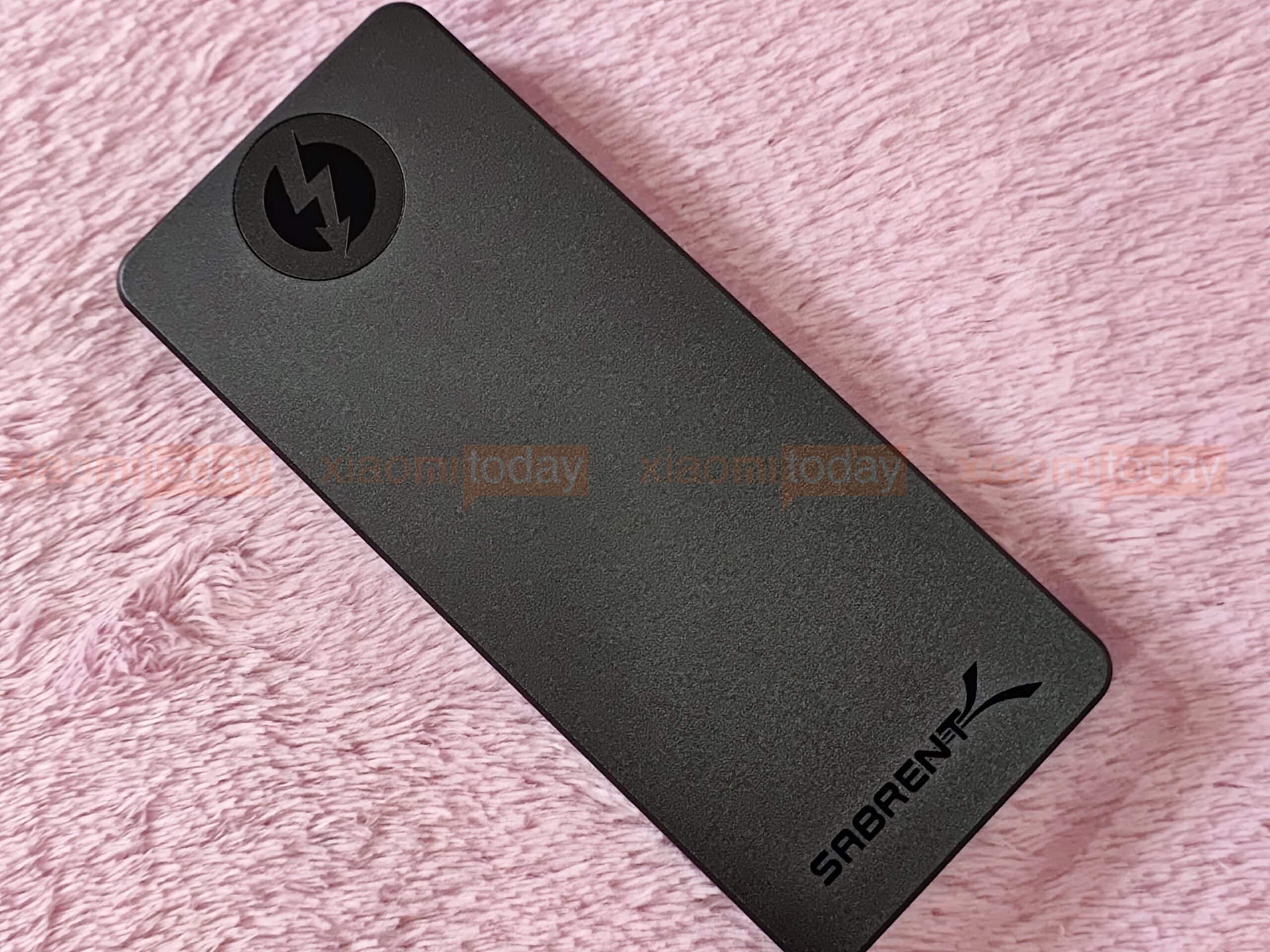 Thunderbolt 3 devices are primarily the domain of Mac owners. High-end Windows laptops normally also have Thunderbolt 3 support, but most desktop PCs don’t unless you’ve invested in a really fancy motherboard. Sabrent’s choice for a sleek Mac-style metal housing is, therefore, quite understandable. The finish is black anodized with the most beautiful effect, it’s always good if it shows on your desk. Feels good, looks good, and at 104 x 45 x 14mm, it’s even more compact than the Samsung X5. At 124 grams, it is also a bit lighter, but typical external SSDs weigh a lot less.

In the lower part of the frame, we notice two rubber feet that allow the drive not to “slip” on any surface, while in the front we will find the LED that notifies the read or write activity on the drive, with the USB Type-C / Thunderbolt in front of it. With dimensions slightly larger than that of an M.2 2280 drive, the Sabrent Rocket XTRM-Q has a fairly original design that looks like the “enlarged” version of the Rocket Nano we have already reviewed (although in reality the Nano was launched on the market after the XTRM and XTRM-Q series).

Separately, it is also possible to purchase a Shockproof Protection in rubber designed specifically for the XTRM / XTRM-Q series which makes it almost immune to accidental falls and impacts.

Of course, the disk is more durable than a classic external HDD, and its durability can be further improved with the silicone case included in the package. The drive is compatible with Windows XP up to the latest Windows 10. Of course, there is also support for Linux and Mac OS. The warranty is then over the standard five years. 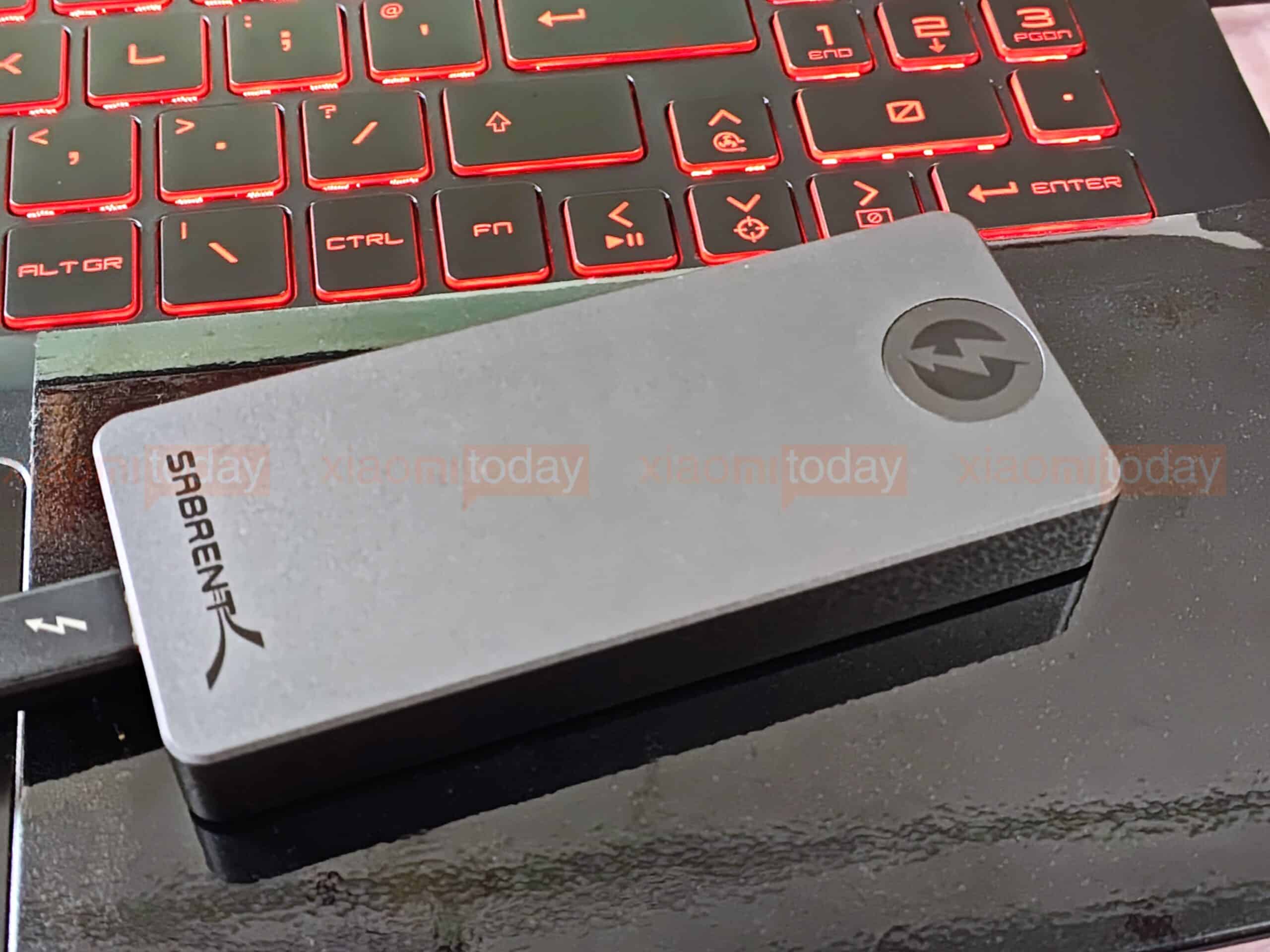 What makes this series interesting is that it allows connection to the computer in two ways. The first of them is the fast Thunderbolt 3, thanks to which you can reach the maximum speed of the disk, but if you do not have this connector on your PC or laptop, there is still the option of connecting the disk via USB-C 3.2 Gen2. Here, of course, you have to take into account that the speed is limited “only” to 900MB/s. Sabrent offers this series in different capacities, XTRM-Q is, therefore, a series with QLC SSD solutions. In our case, we have the medium 2TB variant, carrying Micron’s 96-layer QLC chips. The drive also has DDR3L DRAM memory. As for the controller used, it is a Phison E12S model.

In the SSD, we have an NVMe SSD of the brand in PCI Express 3.0 with a Physon E12 controller and QLC memory chips. For Thunderbolt it’s an Intel chip and for USB 3.2, Realtek. The SSD is given for 2700 MB/sec in Thunderbolt and 900 MB/sec in USB 3.2. The rest is mystery and gumball. As usual, Sabrent puts forward a one-year warranty extendable to 5 years after registration on the site. A limitation that should however only concern the United States.

Here is the software used for the tests: 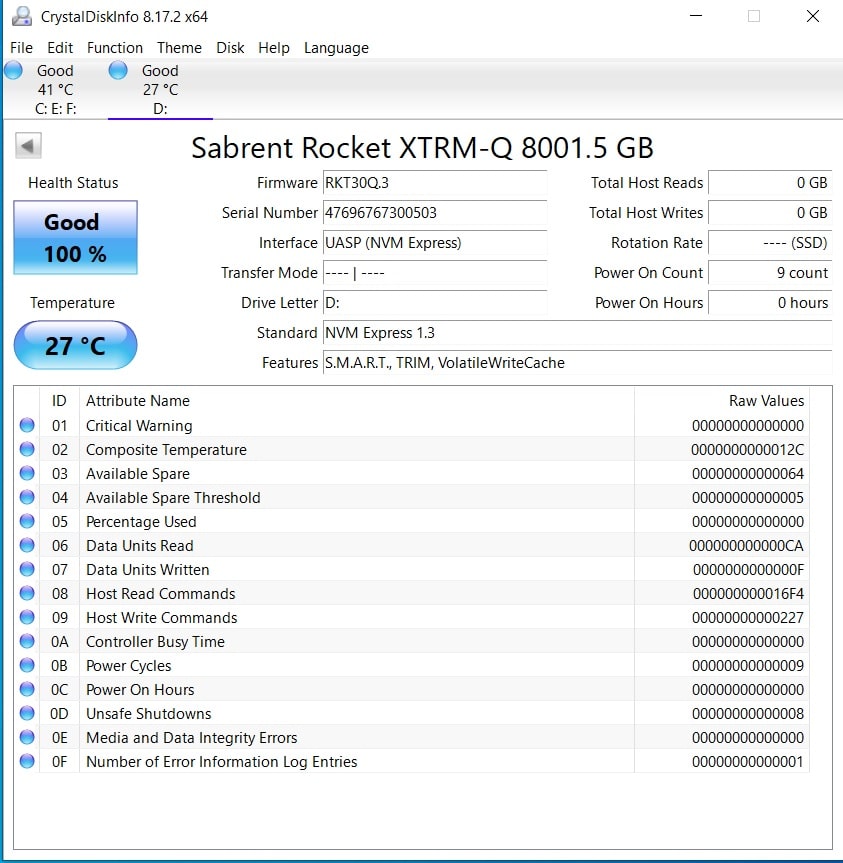 The drive was tested as out-of-the-box, with firmware version RKT30Q.3, the latest version available. Here is the screenshot of Crystal Disk Info with the SSD installed.

As you can see, the sequential speed is really high, specifically reading stands out, above the declared values of 2189MB/s. The writing is slightly lower than the theoretical maximum, and 309K read IOPS and 48K write IOPS.

AS SSD is one of the two most demanding tests in our small but effective benchmark suite, but despite this, we still manage to exceed the stated specifications by totaling 1953 MB/ s in reading and 1749 MB / s in writing, for a final score of 4866 points. in the main benchmark.

In USB mode, the XTRM-Q performs very well, scoring the best values recorded with external storage units tested so far, that is 1 GB / s (1024 MB / s) both in reading and writing. The values with 4 KB files are also excellent, often difficult to digest from external drives. In the thunderbolt test ATTO immediately gives us a clear picture of what to expect from use with the Thunderbolt standard: reading speeds jump up to almost 3000 MB / s, while writing speeds reach peaks of more than 1800 MB / s, with an excellent level of performance. even with small files.

If you are familiar with video editing software, you will know that DaVinci Resolve is one of the most used NLEs (Non-Linear Editors) in the industry even at a professional level, counting among its ranks film giants such as the most recent episodes of X-Men, Men in Black and John Wick 3 – Parabellum. To test the support of storage units at various codecs, resolutions, and framerates, the company offers its  Disk Speed Test, very useful for verifying that an SSD or any storage unit allows video editing on these media, At the end of the tests carried out on the USB bus, the Blackmagic benchmark also shows results higher than those declared by the brand, with the analysis software indicating a more than correct management of almost all the codecs taken into account, except for the 10 one. YUV 422 color-coded bits at 2160p resolution and 50/60 frames per second.

Thanks to the speeds achieved with the Blackmagic Design Disk Speed Test of 2500 MB / s in reading and 1600 MB / s in writing, the analysis program lets us know that it is possible to manage any type of codec, resolution, bitrate in absolute fluency. and framerate. Even the exorbitant 10-bit codec with Chroma YUV 422 encoding abundantly passes the test, scoring as many as 72 frames per second of speed, against the 60 necessaries for fluidity with this format.

The era of ultra-fast external SSD drives is probably slowly knocking on the door, and speeds of around 2-3GB/s will probably become more and more common. The Rocket XTRM-Q model from Sabrent is a clear proof of this, even if you need Thunderbolt 3 for this, which unfortunately is not yet widespread and you can find it more on more expensive laptops or TOP models of motherboards. The good news, however, is that the drive is also able to work in a classic USB port, but at the cost of reducing the speed within the limit of 10GBps, i.e. around 900-1000 MB/s for writing and reading.

So the manufacturer fulfilled what he promised in the official parameters, even in the case of reading it turned out to be about 10% better, in an extreme case. That’s commendable, it’s usually the other way around. In addition, the manufacturer added a tasteful design with a durable aluminum body and the option to insert the disc into a durable silicone case, which is included in the package. The only disadvantage is the possible weight of the disk exceeding 100g, which is a tax for that aluminum case, which also fulfills the function of a large passive cooler.

I also see a big plus in the fact that if we start copying large files, the disk keeps its maximum performance up to about 25% of its capacity, which corresponds to a file of about 500 GB. And if you were to write even much larger files, the Rocket XTRM-Q can still maintain a speed of around 300 MB/s. Anyway, this is one of the most interesting and best classic external drives, which therefore uses a modern SSD, which is clearly the best technology for an external disk solution. In addition to the usual USB Type-C 3.2, it also offers extremely fast Thunderbolt 3, and the transfer speeds and capabilities correspond to this. In short, this is a really fast drive and if you have a Thunderbolt 3 connector on your PC, this is one of the few solutions in the classic form of an external drive that can use it.

This external SSD is simply external. Solid, well made, super hyper-efficient, and guaranteed for 5 years. You can buy this Rocket XTRM-Q Thunderbolt 3 External SSD from the official Sabrent’s Store and Amazon Store.