If you’ve kept old technology for nostalgia reasons, you can pay them one last respect by turning it into art. A company called Xreart sells kits to take your old tech apart and frame the individual components into beautiful, nerdy works of art. There are things you only believe when you see them. This is also the case with the “art of deconstruction” by the Xreart company, which tears discarded tech products apart into their individual parts in order to create attractive wall decorations from them. This includes various iPhone models, which are presented as framed works of art disassembled into their components and can be purchased.

Who is Xreart? And How Did The idea Come About?

The basic idea is as simple as it is suggestive: to take a technological device that has somehow marked history, becoming an object of worship, and transform it into a work of art. Xreart didn’t just take an iPhone and put it in a frame, it would have been too simple. 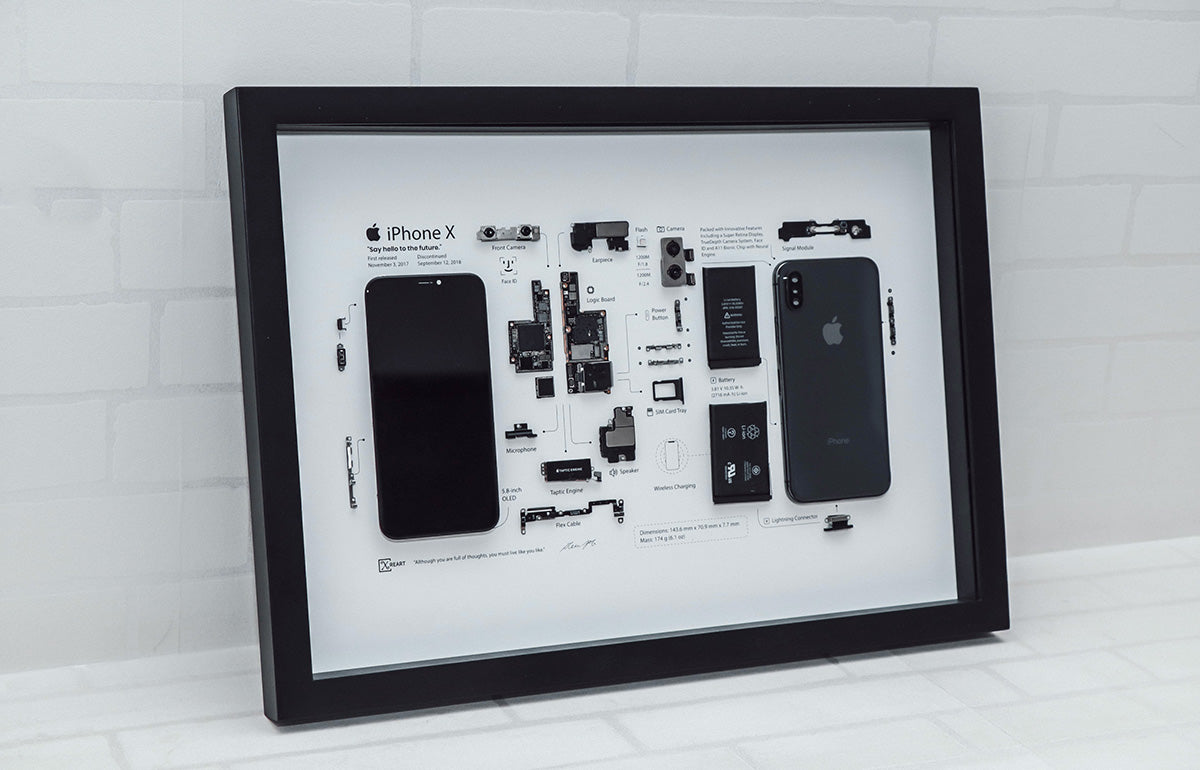 Here is the winning idea: completely disassemble the smartphone, fix the various parts on cardboard indicating in detail the function of each element, and insert everything in a simple and minimalist frame, protected by a sheet of plexiglass, to hang on the wall. It is a very special way of making technology immortal, as well as allowing you to discover how a smartphone is made inside.

I told you about iPhone X Frame because it is precisely the work that Xreart sent me to touch the quality of his creations and his way of working. It all started in 2019 when one of the photographers of Xreart Studio accidentally dropped his iPhone 6 and destroyed it. 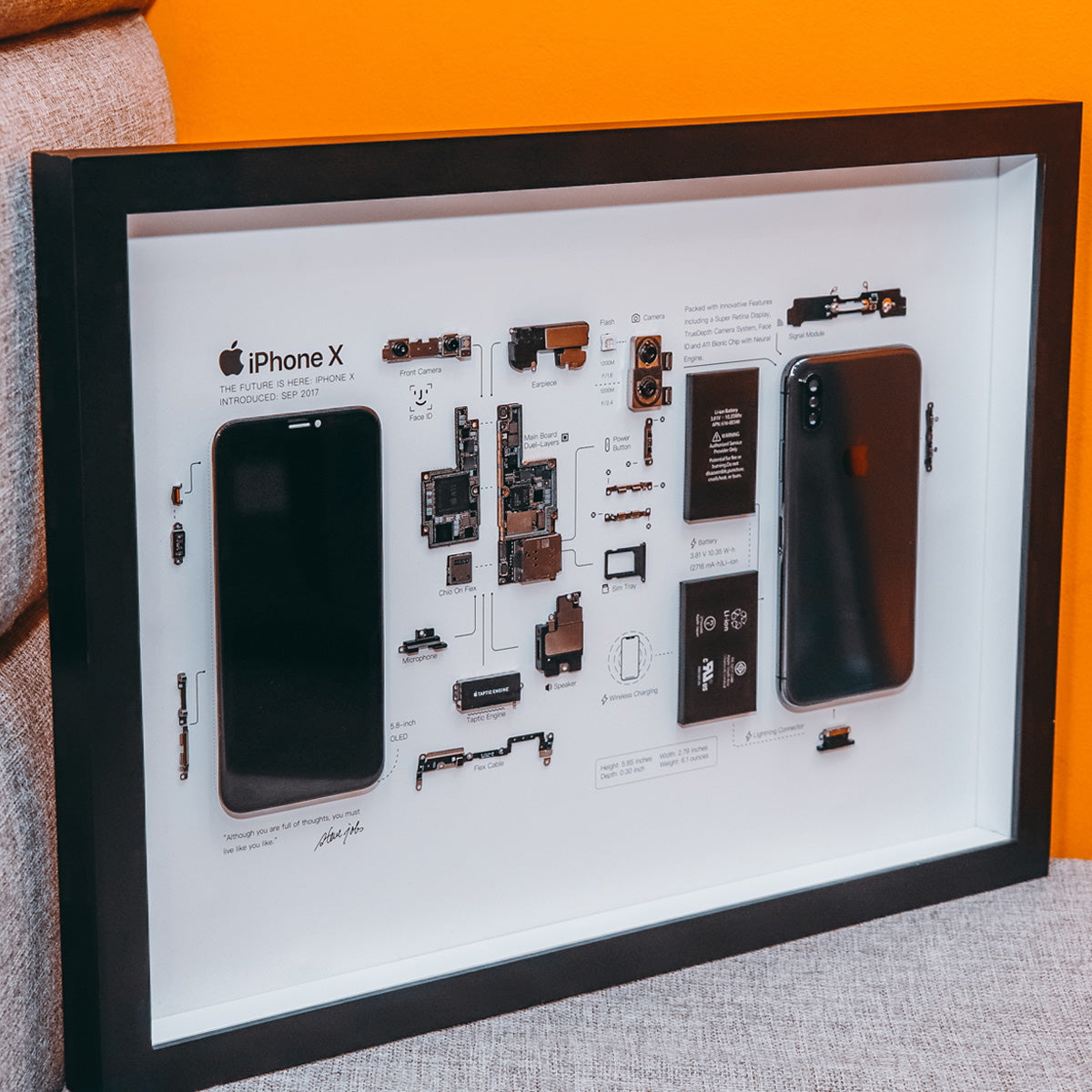 As a great lover of Apple products, he did not want to get rid of the smartphone, even if irreparable, and surfing the Net to find a solution he came across a photo that portrayed an old unused iPhone in a protective case. It was a short step from the image to the idea. The team created the first prototype of an iPhone 6 disassembled and transformed it into a work of art, immediately garnering great acclaim. Although the pandemic has made everything more difficult, the team has not been discouraged and last year began marketing their creations.

At the moment the company focuses on Apple products (iPhone and Watch) without disdaining another piece of history such as Nintendo’s GameBoy, available in different variants.

We Got the iPhone X 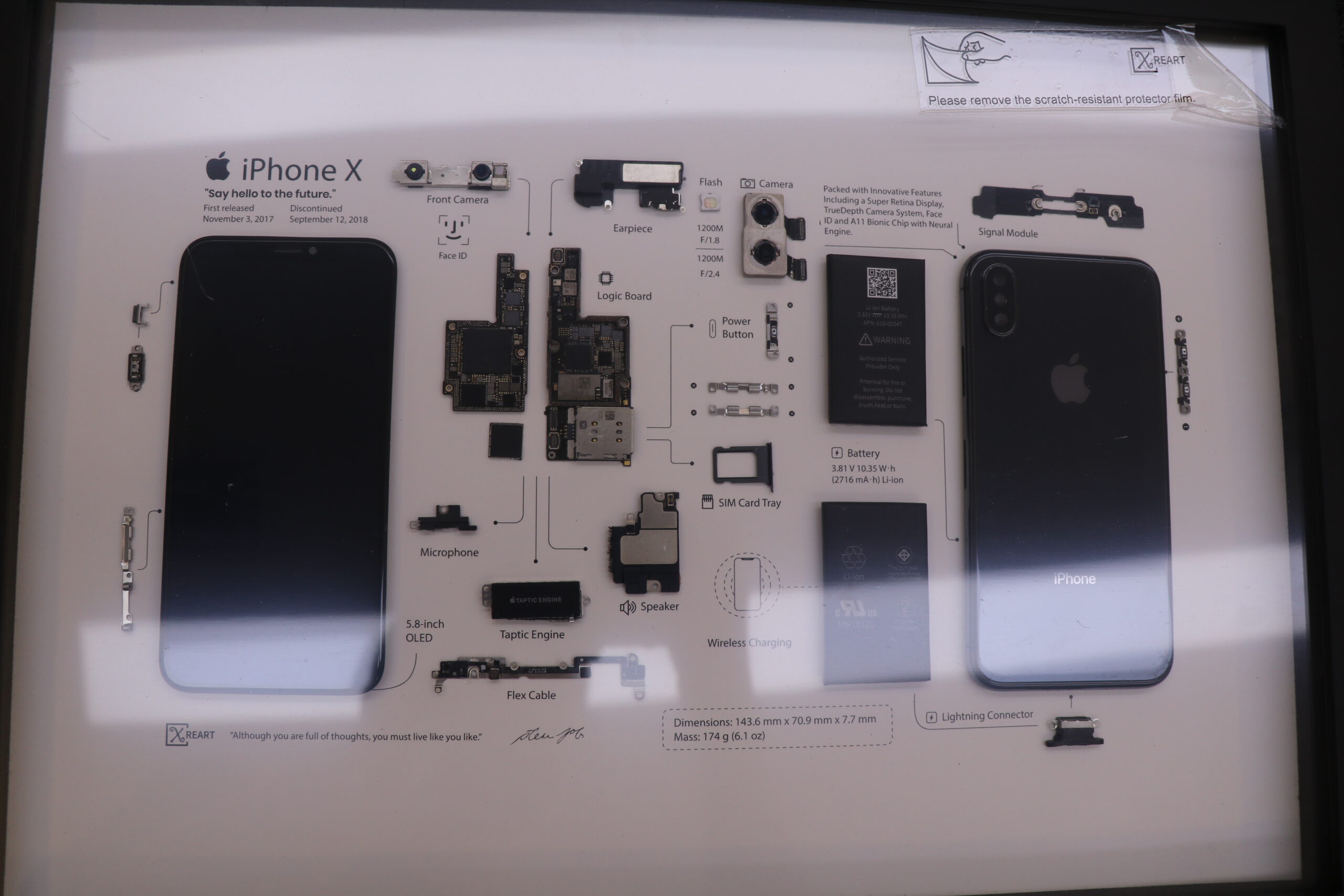 As you can see from the cover image and those in the article, Xreart took an old iPhone X, which proudly shows the signs of aging, disassembled it, cleaned it, and placed it in a frame. The various components are glued on a white card, which serves as a legend for each component. It must be said that this model, as well as the first generation iPhone and other iPhones, are without battery, present instead of in almost all the frames dedicated to the following models. 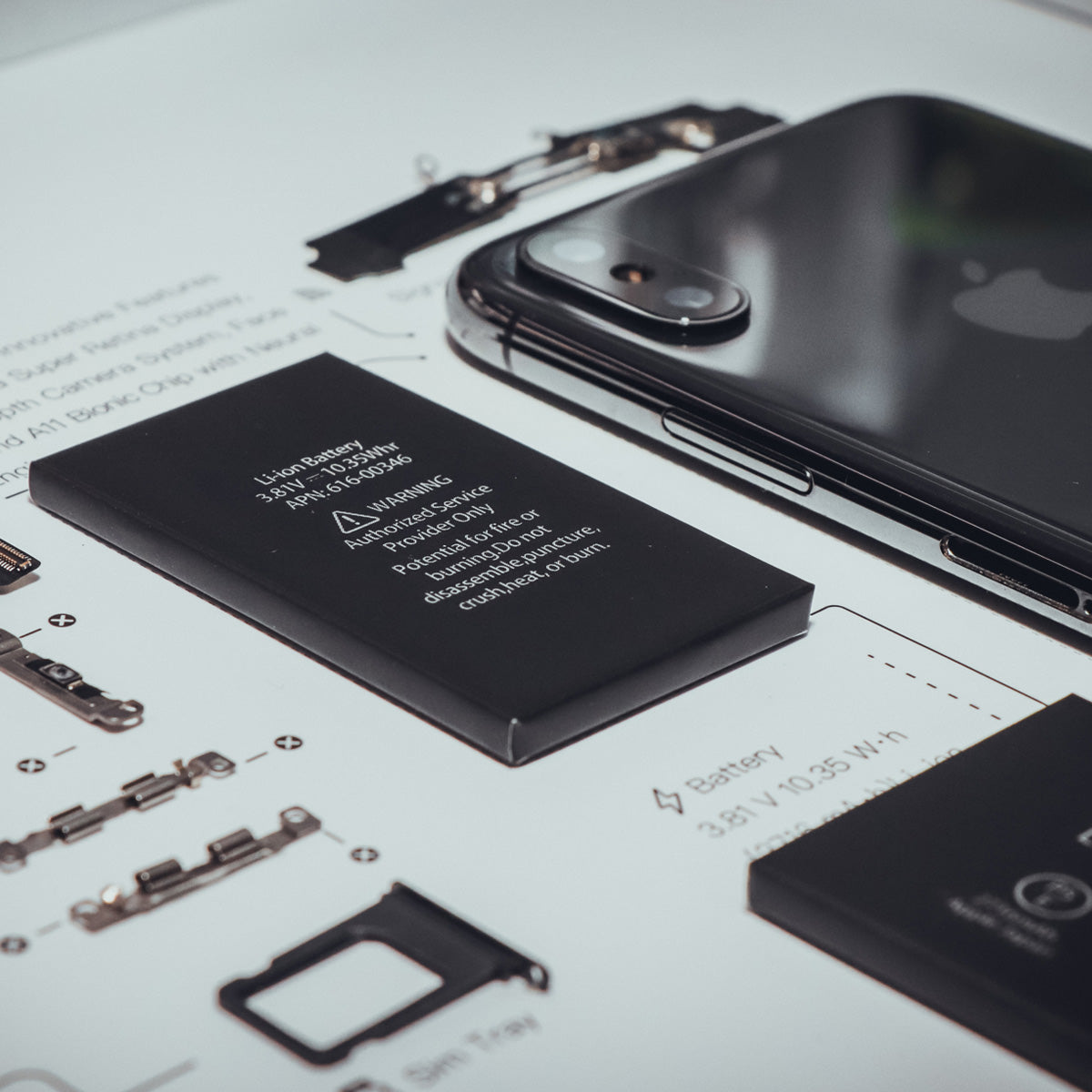 However, it must be said that Xreart did not use real batteries, replaced by plastic dummies to avoid any problems due to the release of toxic and potentially dangerous substances. The absence of the battery in the frame dedicated to the iPhone X is not a lack and certainly does not make the final result less pleasant.

What stands out the most is the motherboard, positioned in the center of the picture, with a screen and back cover that frame other elements arranged in an orderly manner, each with a description. They range from the camera to the power button, without forgetting the volume rocker, the SIM tray, and other various connectors. 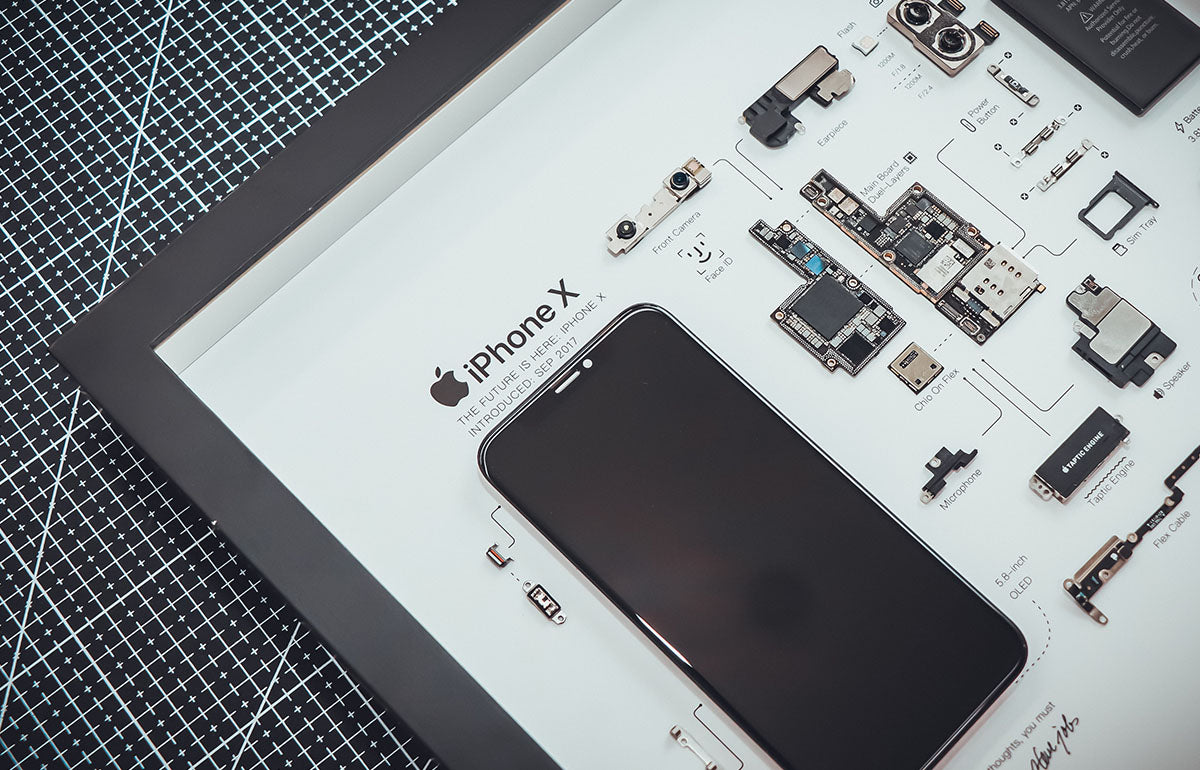 On the top left, instead, the model is described, with the original characters, together with the launch date and the date of exit from the market, also in this case to emphasize the uniqueness of the product. 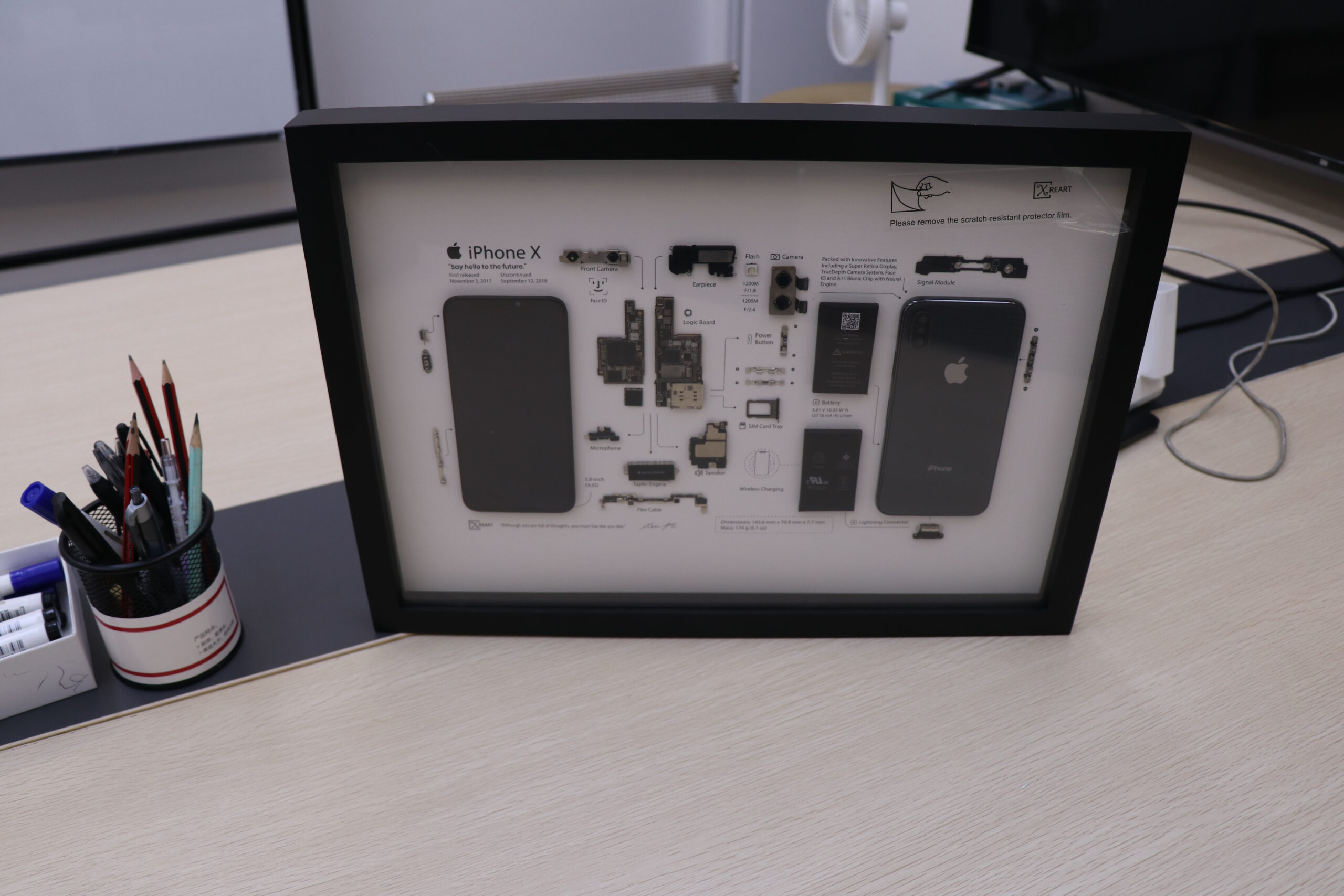 Xreart also meets those who already have an iPhone (from the first to the iPhone X) and want to make it a painting. You can purchase the frame with the cardboard for fixing the parts, along with the tools needed to disassemble the phone. And for those who have no budget to allocate to this operation, templates are always available to download and print independently, to create a work of art at no cost (if you don’t want to count the money spent on the smartphone).

I liked the idea of Xreart very much, and despite being a big fan of Android smartphones, I decided to reserve a place for iPhone X too, “responsible” for my transition to the green robot. The prices are not bad, they start from 119 euros, just over 100 euros, for an iPhone 4s to get up to almost $ 300 to take home the frame with a first-generation iPhone.

If you consider what such a device in a reasonable condition often costs even if you use it yourself and consider the necessary work and time to disassemble, clean and drape everything properly, you can roughly imagine the effort involved. All of this costs money, so I think the price is completely justified. The connoisseurs among us will certainly agree with me. In any case, such a frame is a real eye-catcher on the wall and certainly attracts attention and thus provides a topic of conversation. Such a frame should also be a great gift idea for lovers of tech enthusiasts.