On June 18th 2022, We have already stepped into the second half of the year, and it is a vacuum period for the smartphone manufacturers. Now mostly all the companies are trying to bring their new smartphones with Snapdragon 8 + gen. Also, the gaming phones are not behind. Red Magic has now come up with the new smartphone Red magic 7S Pro. Xiaomi Today expects the smartphone to launch very soon on the market. The product is now at the Ministry of Information and Information Technology.

Previously, according to the blogger @Digital Chat Station, “The Red Magic 7S Pro of Snapdragon 8+ has also been connected to the Internet, and it still comes standard with a 165W fast charging head, and the mobile phone itself also supports a relatively fast super-100 watt fast charging. In the first half of the year, under the screen, The proactive Pro relies on the built-in fan to suppress the Snapdragon 8, and this generation of TSMC Snapdragon 8+ with a pressure of 3.2GHz can also do it.” The Snapdragon 8+ is based on TSMC’s 4nm process. The maximum frequency of the CPU’s Cortex-X2 super core has been increased to 3.2GHz, and while the performance is improved, the power consumption of the Snapdragon 8+ has also been greatly optimized. Dragon 8 is down around 15%. 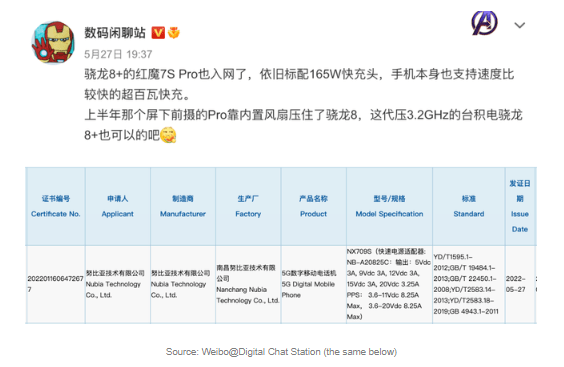 The new Red Magic 7S Pro will achieve high performance compared to its predecessor. The product will come with the in-built cooling fan which achieves the active cooling and the frame rate of “Yuanshen”.