With the launch of the 12th-generation Core desktop processor Alder Lake by Intel, it marks that all new platforms currently fully support PCI-E 4.0, and it has been almost two years since the first consumer-grade PCI-E 4.0 SSD entered the market., products have also begun to be gradually subdivided. With the popularization of new technologies, we will focus on PCI-E 4.0 mainstream products with a larger user base. TEAMGROUP T-Force CARDEA Zero Z440 is such a product. Its read and write speed is still much faster than the M.2 SSD of PCI-E 3.0, and the price is also very competitive.

CARDEA ZERO Z440 provides 1TB and 2TB capacity options, and the read performance can reach the maximum of 5,000MB/s for writes and 4,400MB/s for writes. TeamGroup has added double-layer thin graphene copper heat dissipation to its T-Force Cardea Zero Z440 SSD to help conduct heat, and at the same time, it is compatible with motherboard manufacturers’ M.2 heat sink installation position.

This is an in-depth look at how one of the popular options, Team Group’s T-Force Cardea Zero Z440 (1TB Version) works. We’ve had a lot of positive reviews of the TEAMGROUP’s SSDs. Is this attractive NVMe SSD their other highlight? Explore our Cardea Zero Z440 review for comprehensive answers. 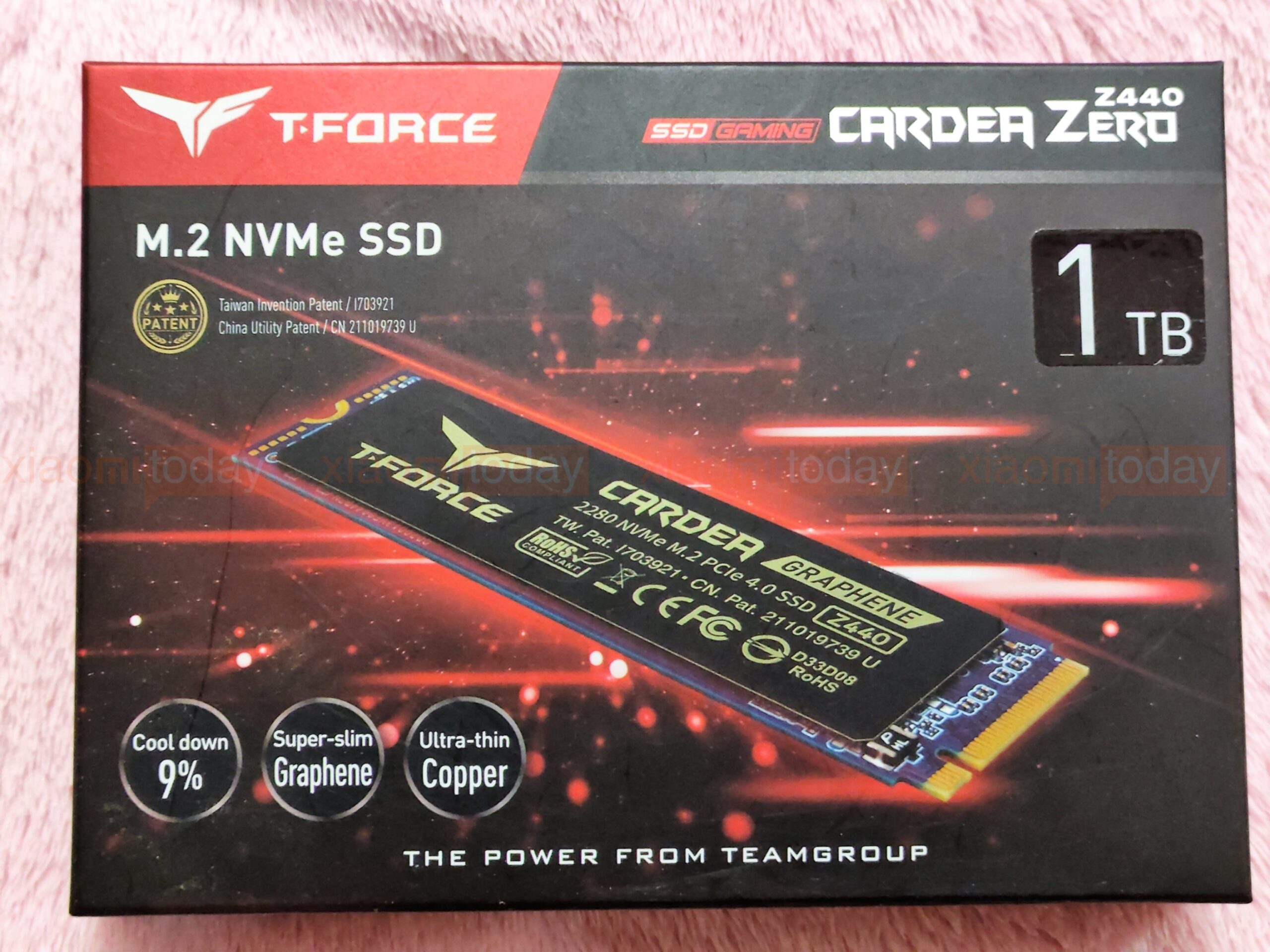 The outer packaging style is the same as the T-Force CARDEA A440 SSD. I still like the packaging style of TEAMGROUP T-Force CARDEA Zero Z440 SSD. which is very passionate. The SSD is packed in a soft cardboard box, in addition to the picture of the SSD, with some main features marked on it, and the capacity is identified by stickers. 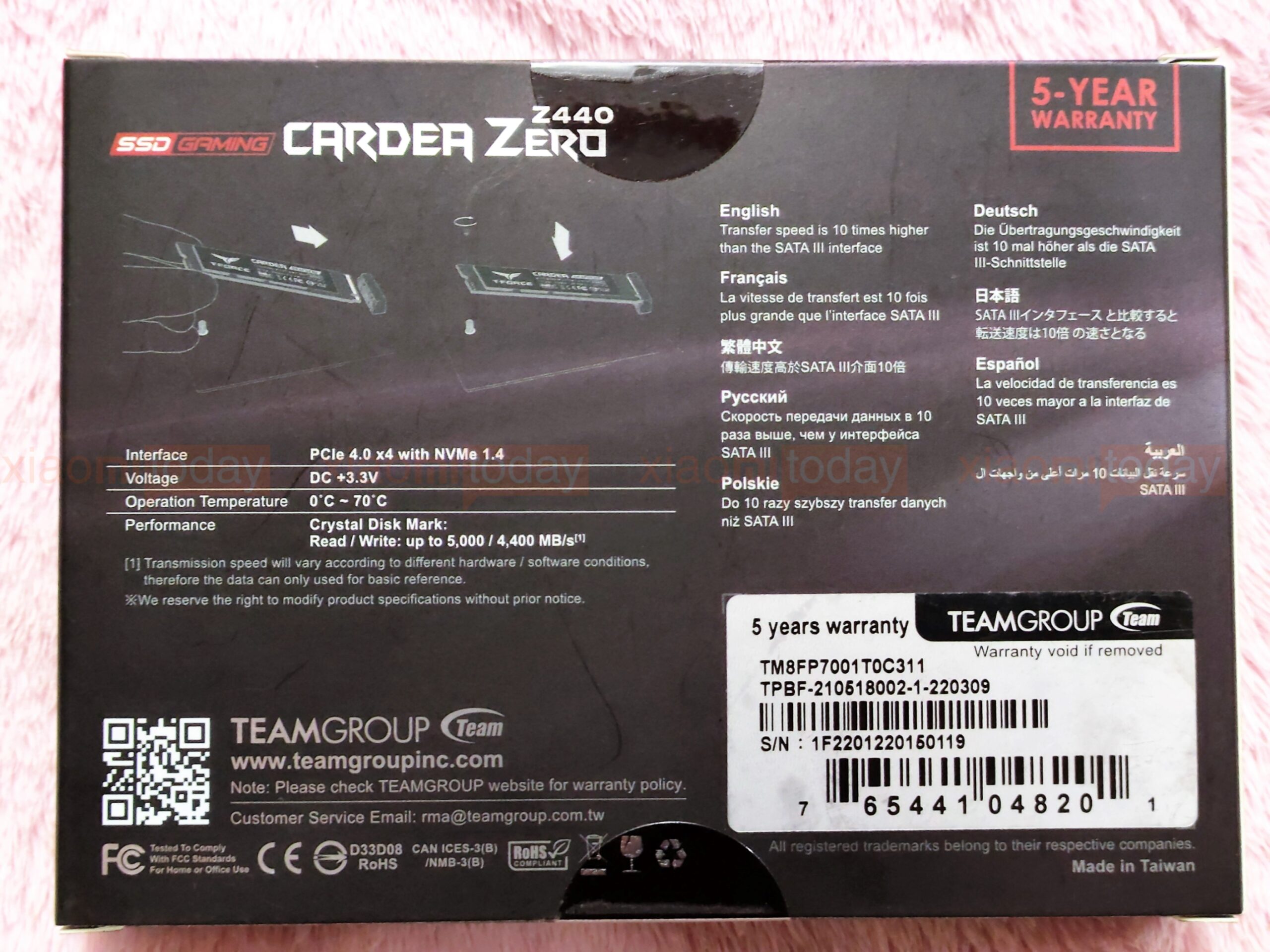 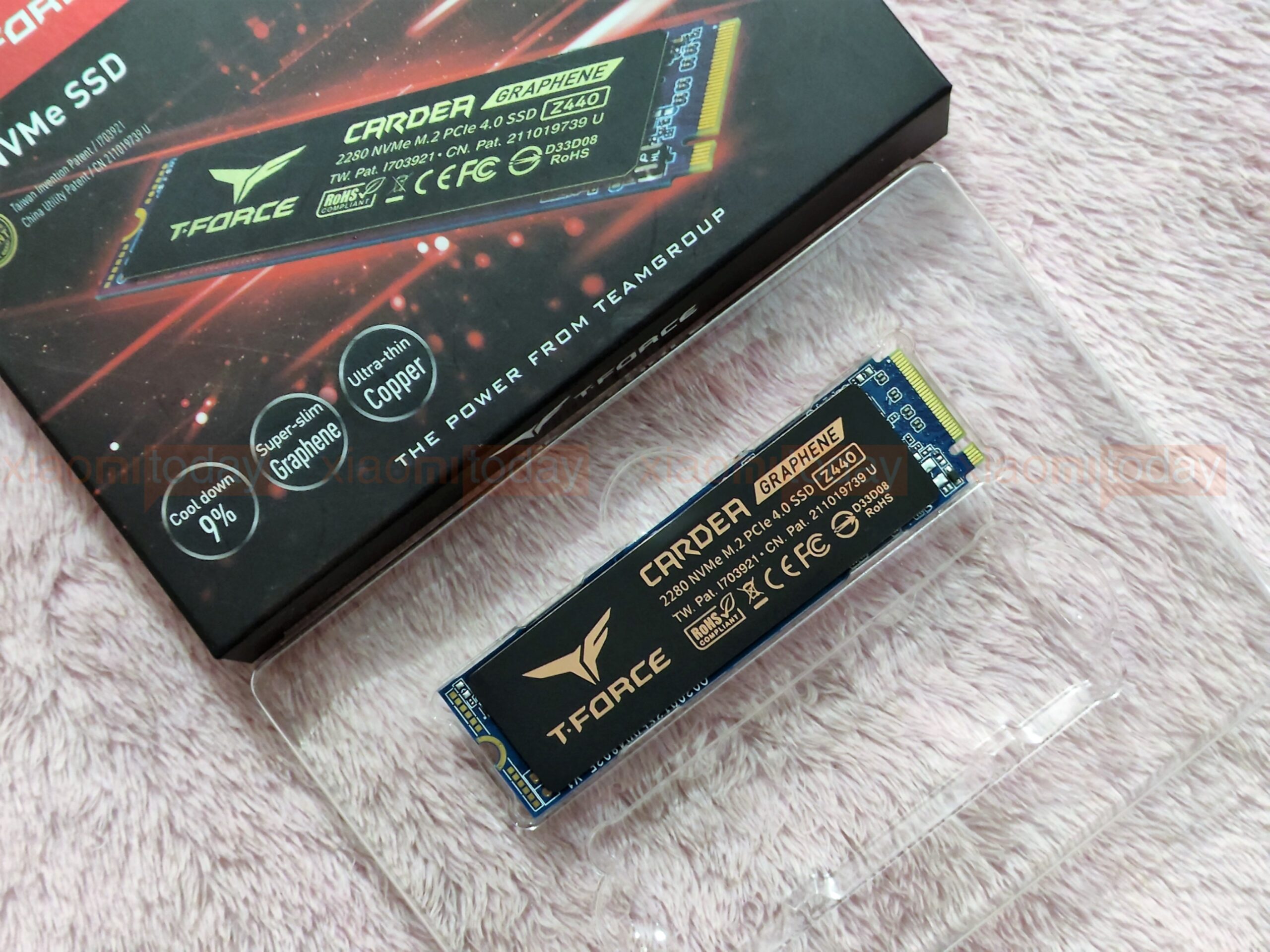 In terms of appearance, the Z440 is simple and intuitive. The front of the SSD is attached to the graphene-copper foil combination thermal conductivity material certified by T-Force patented technology. Its thickness is only 1mm. The three elements of heat capacity (copper) work together to dissipate heat. Under the ultra-thin appearance, it can ensure that players are not limited by the thickness of the heat sink to affect the DIY flexibility when setting up the machine. In the M.2 slot of major motherboards or laptops, Expansion can be installed on all tops while creating the T-Force’s thin aesthetics and bringing the ultimate performance release. 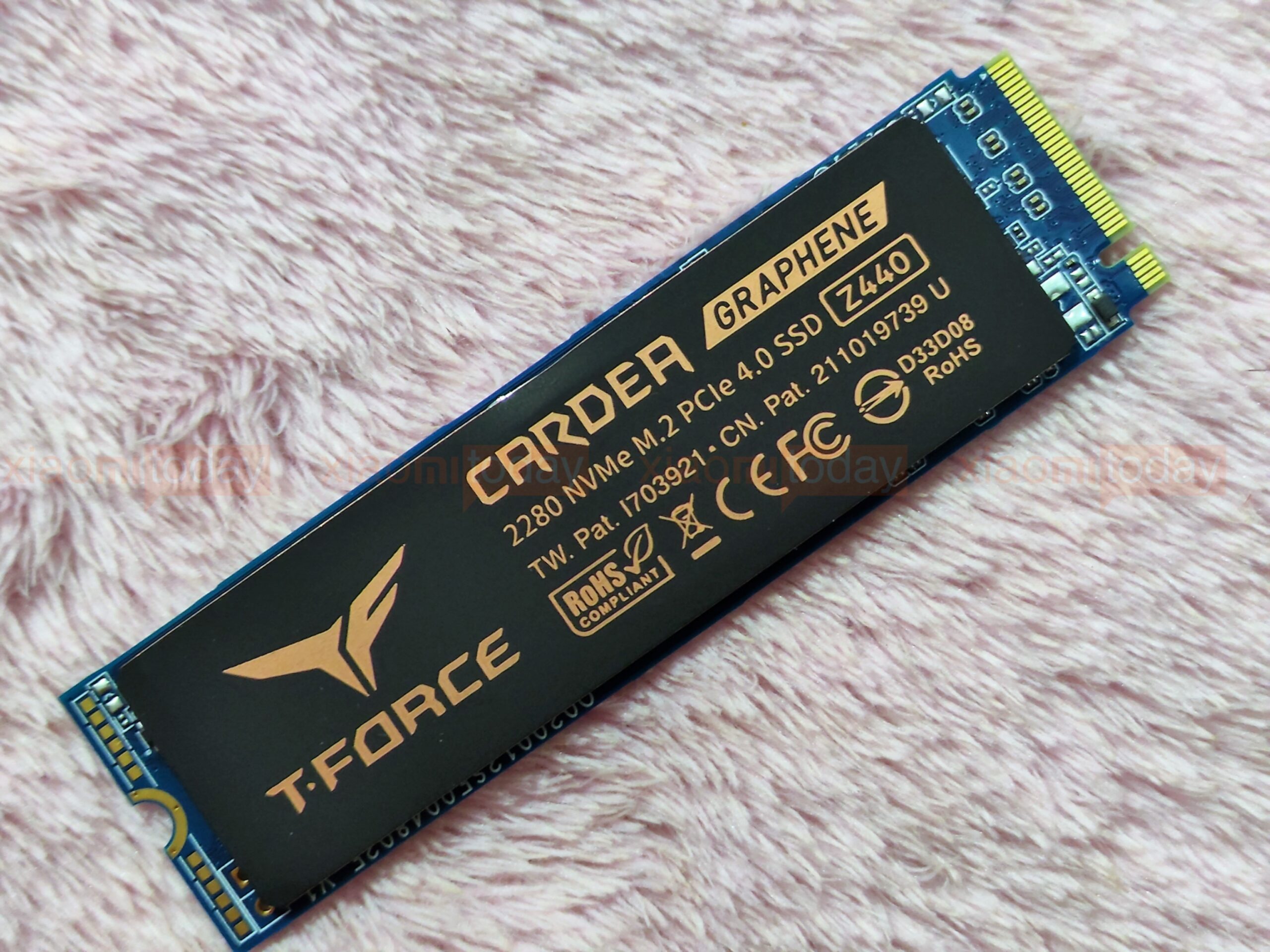 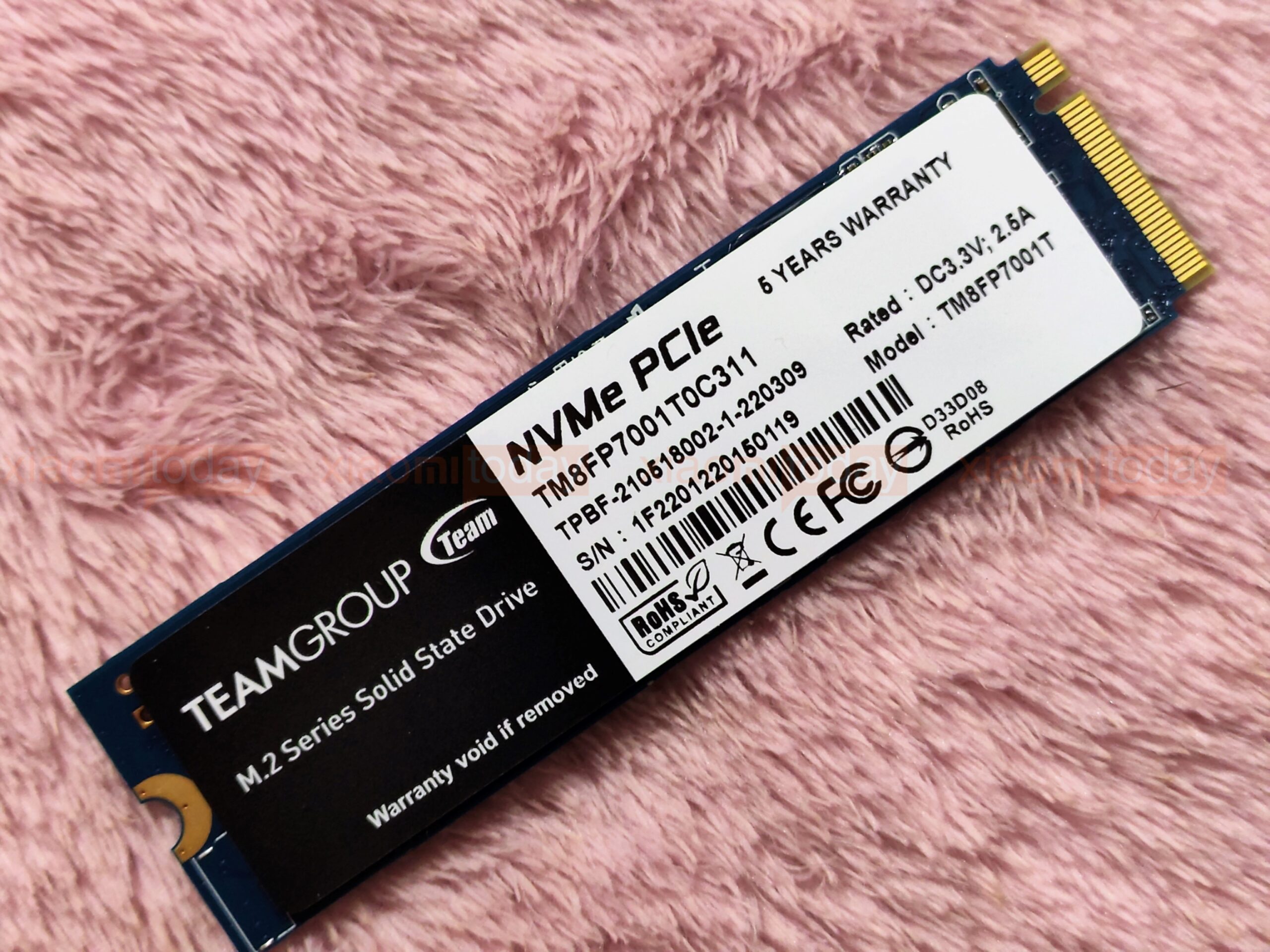 The specification label sticker is located at the back of the circuit board to avoid the blurring of the M.2 thermal pad silicone oil on the motherboard from affecting the warranty rights. The warranty period is 5 years or the total TBW write capacity.

When removed the graphene heat sink, you can see the Phison PS5016-E16 SSD solution. The T-Force Cardea Zero Z440 with the graphene heat sink removed is no different from the M.2 NVMe PCIe SSD on the market. The silver-gray chip located in the center of the circuit board is the PS5016-E16 controller chip, and the silver is copper-plated The result of an oxidized surface layer. 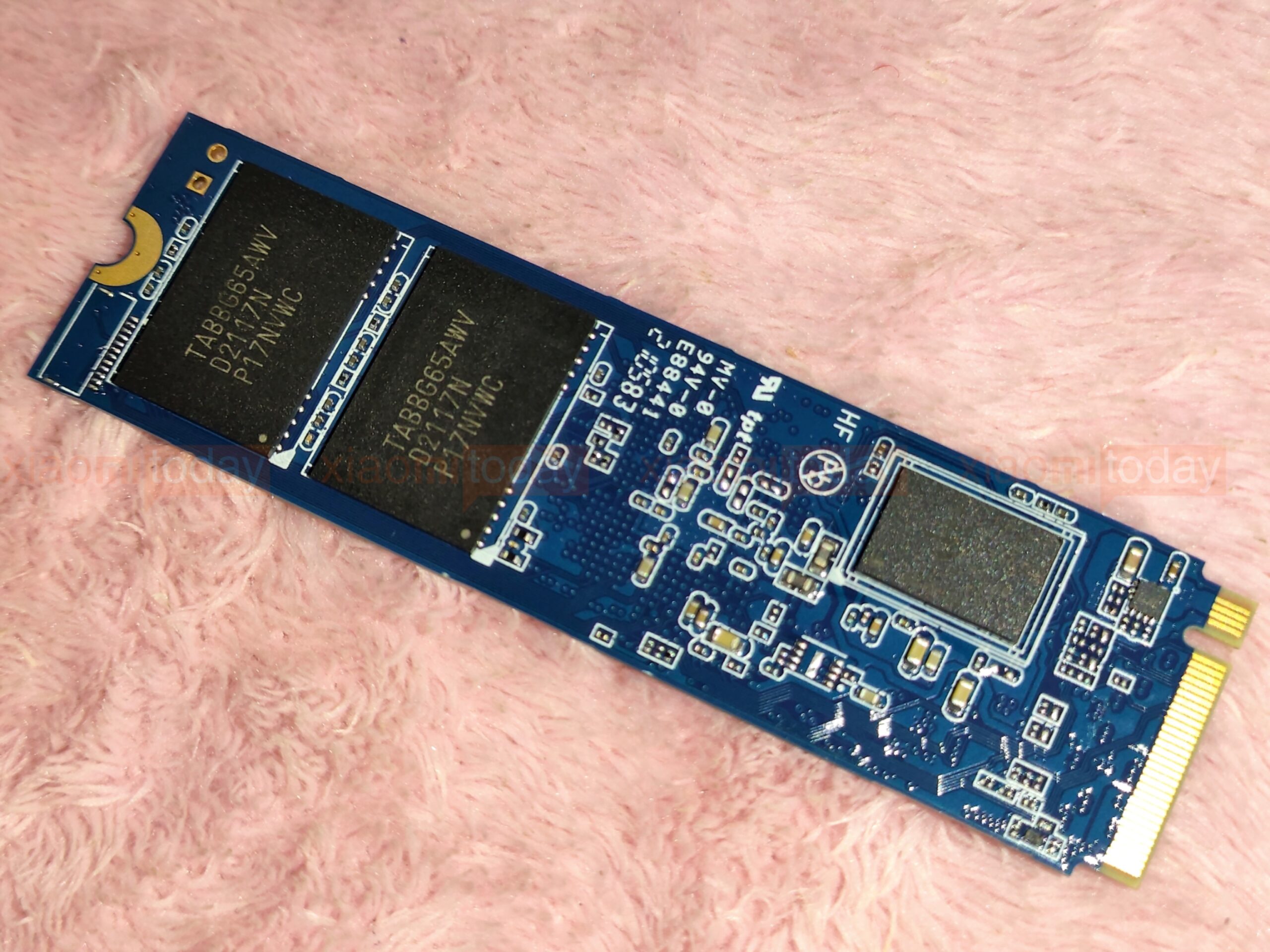 The flash memory particles are arranged with two self-packaged TABBG65AWVs on the front and back sides of the circuit board. A single-chip should have two read and write channels, so as to fill the PS5016-E16 controller to obtain the best speed, and the single capacity is 256GB. TABBG65AWV uses Toshiba BiCS4 TLC record type flash memory inside and enables the SLC cache function to treat some TLC blocks as SLC accelerated writing. 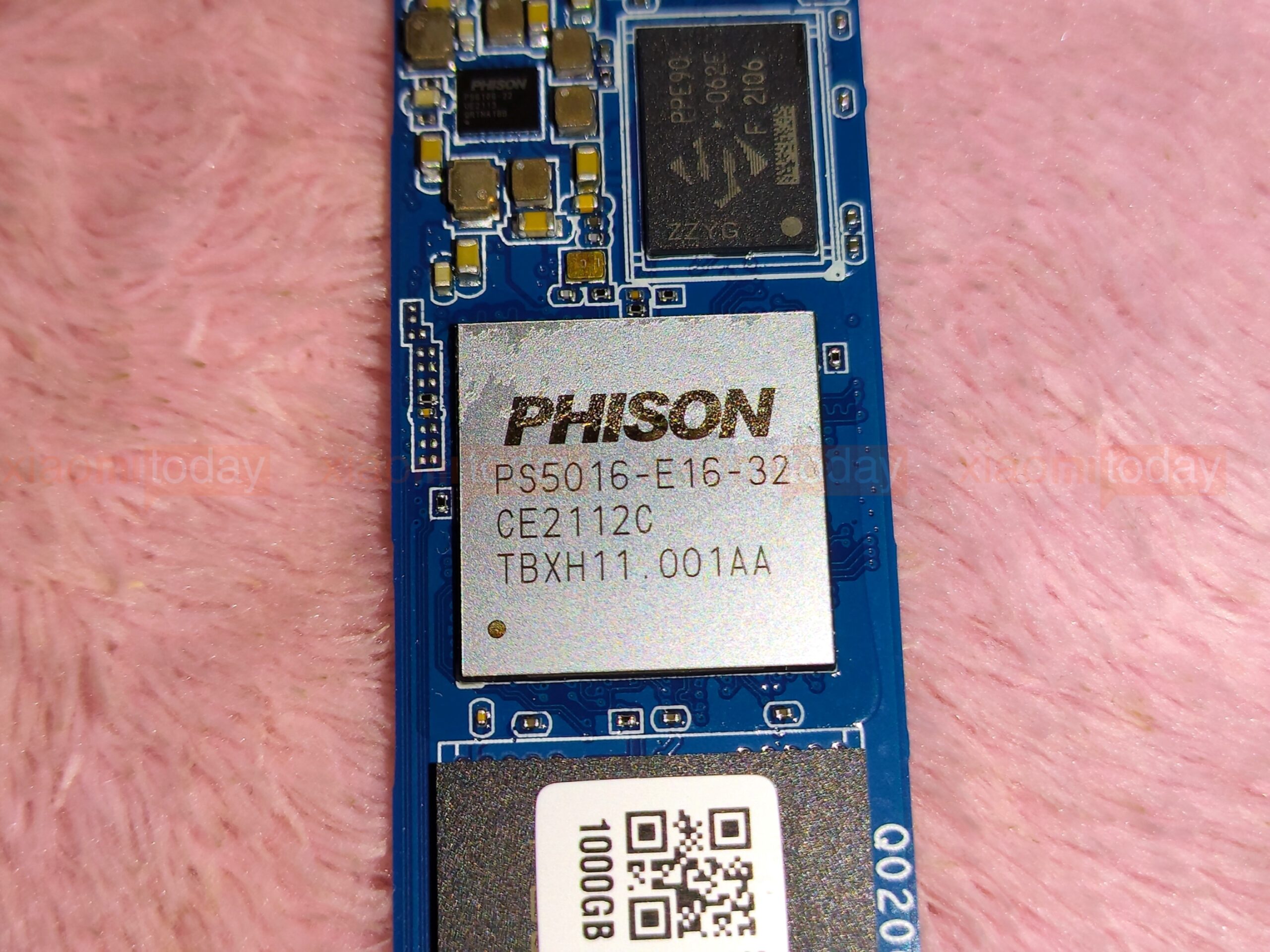 The silver chip of the T-Force Cardea Zero Z440 circuit board is PS5016-E16, which is the only SSD controller that supports PCIe 4.0 x4 in the consumer market. It contains dual-core Arm Cortex architecture and self-developed CO-X processor dual-core and supports the fourth generation LDPC, RAID ECC engine, and end-to-end data protection.

One DRAM cache chip from SpecTek is labeled PPE90-062E F 2106 is arranged on the front and one is the back sides of the T-Force Cardea Zero Z440 circuit board, with a total capacity of 1GB for caching and buffering. 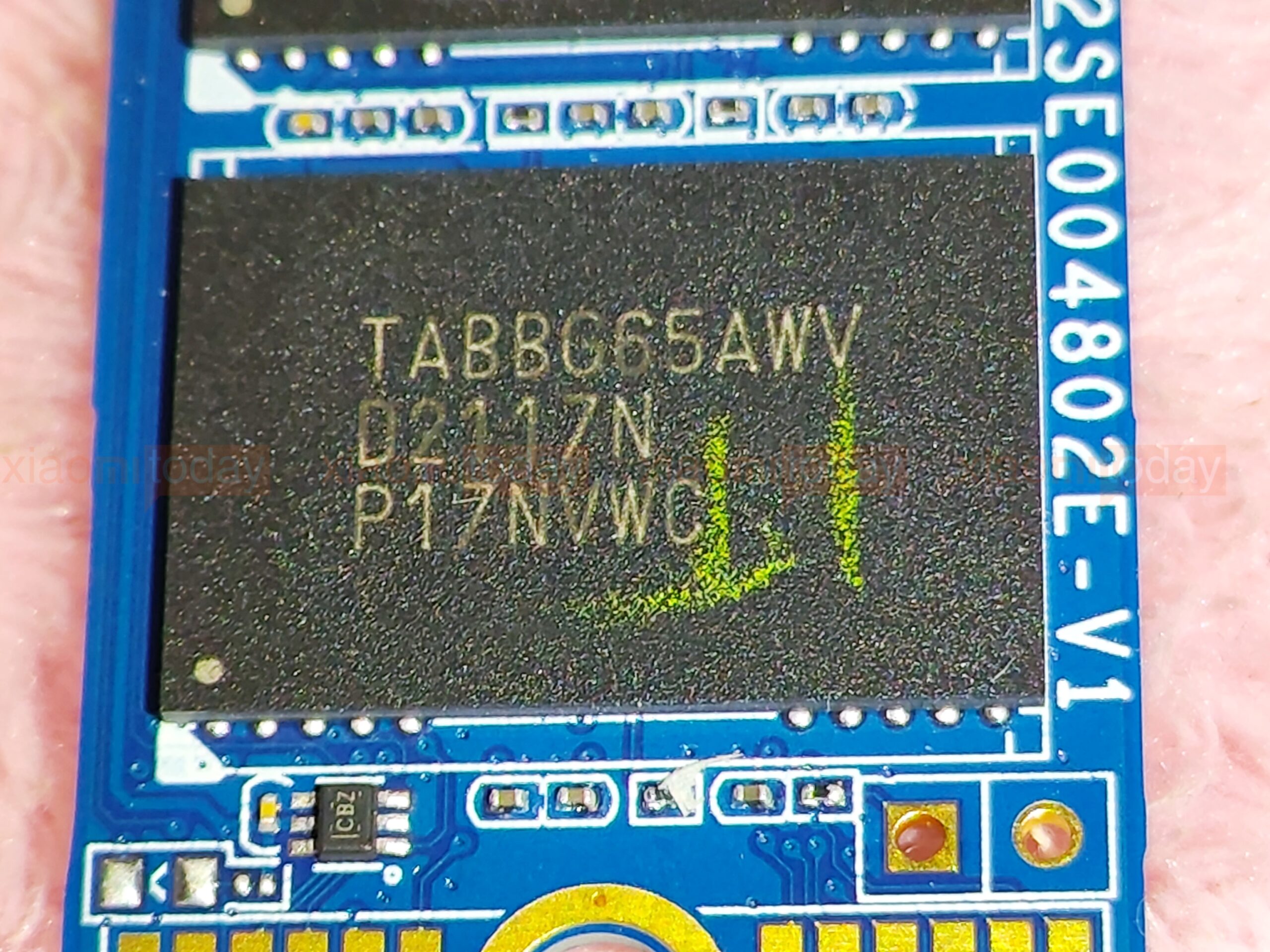 Force Cardea Zero Z440 is equipped with a total of 4 TABBG65AWV flash memory chips, with Toshiba BiCS4 TLC inside, a single capacity of 256GB and 2 read and write channels.

Capacity selection, T-Force Cardea Zero Z440 is not unexpectedly only available in 1TB and 2TB versions, because PCIe 4.0 SSD requires not only controller support, but also multi-channel and multi-CE stacking for flash memory to provide logistical supplies, but the small-capacity version cannot. Reflects the performance gap between PCIe 3.0 x4 and PCIe 4.0 x4. 1TB and 2TB performance, the sequential read and write of official data can reach 5000MB/s and 4400MB/s, and IOPS are both 750,000 IOPS.

In terms of durability and life, the total write capacity of the 1TB version TBW is set at 1800TB, and the 2TB version doubles to 3600TB. The DWPD of the 5-year warranty is about 0.986, which is equivalent to writing the entire SSD capacity in 1 day. In addition, there are 2 versions. The MTBF for the capacity is 1,700,000 hours.

The test platform uses Intel 11th Gen Core i9-11900K processor coupled with a ROG MAXIMUS XIII HERO motherboard, and the tested SSD will be installed in the M.2 interface directly connected to the CPU to obtain the best performance.

Like other memory manufacturers, TeamGroup has launched the Windows version management software SSD S.M.A.R.T. Tool for its SSDs. When you first open the software, SSD SMART Tool is a basic performance analysis tool, which combines a descriptive base of the mounted drives such as model, temperature, status, capacity, etc; in addition to information on the hardware of your machine, and a small benchmark to check the speed of reading and writing.

The Performance tab compares your SSD to similar SSDs in CrystalDiskMark. By default, “Quick Test” is enabled, and when you run it, performance is quickly tested on SEQ128K Q32T1, RAND4K Q8T8, RAND4K Q32T1, RAND4K Q1T1, and SEQ8M Q1T1 on reading and writing. You can select the data to be displayed in MB/s, MiB/s, IOPS, or latency. If you uncheck the “Quick Test” option, the tests will run for a longer time to get a more accurate result. 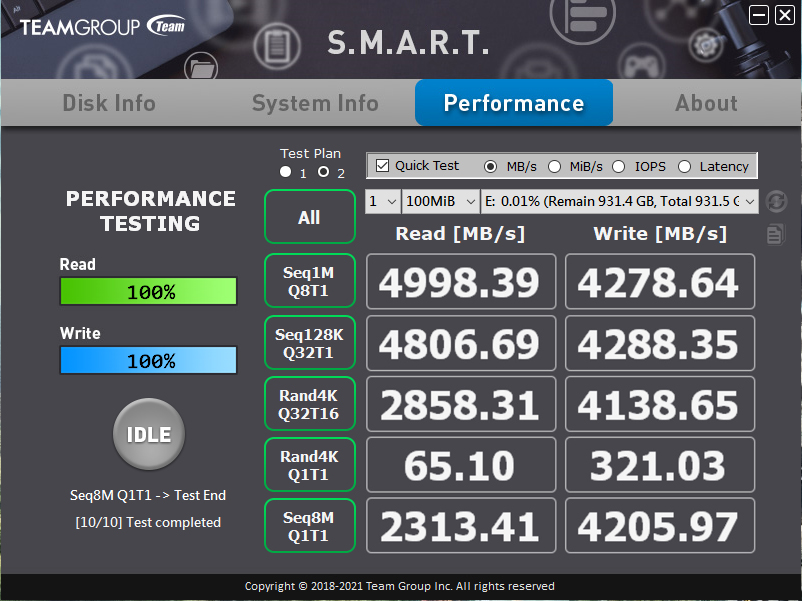 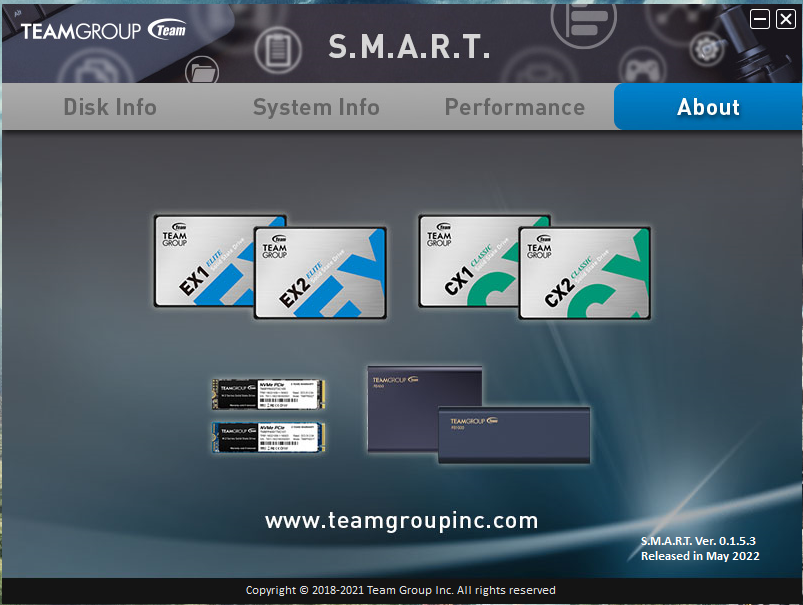 Finally, the “About” tab displays information about the program and allows you to click to open the TeamGroup website.

It also appears to lack any kind of advanced features on the SSD, such as encryption, secure erase features, or handling TRIM or DevSleep features. I like that it has a built-in reference utility. I also like that it allows you to see the status and temperature of the SSD, although these are already basic in this type of tool, it would also have been nice if it incorporated some type of monitoring if the status falls below a certain range.

To test the performance of solid-state drives, we used some well-established hard drive Benchmark software. 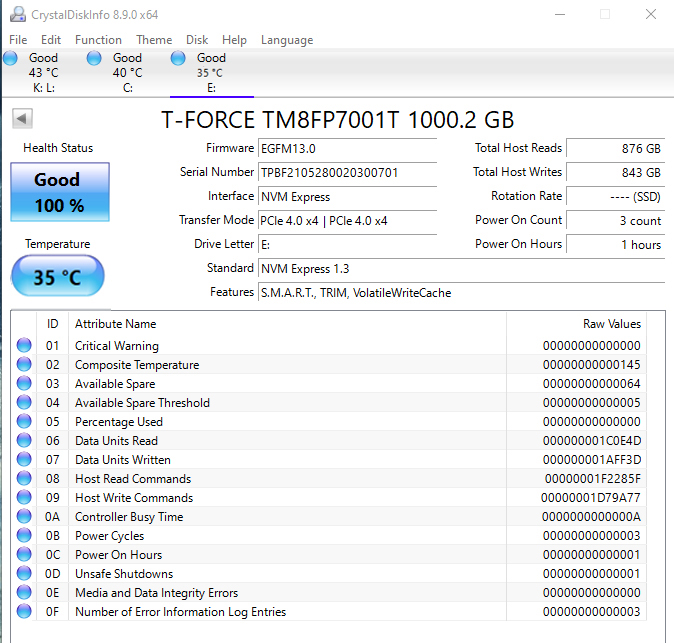 To begin with, let’s look at the information that the well-known diagnostic program CrystalDiskInfo will provide us with. In idle mode, the temperature of the model is at around 35-42°C. The test standby temperature is 35 degrees, and the high-performance operation temperature reaches 62 degrees.

The CARDEA Zero Z440 drive comes in its pure form with no partitions created for file systems. After initialization, creating one partition for the entire available memory, and formatting to the NTFS file system with standard parameters, 931 GB is available to the user.

CrystalDiskMark is another very popular utility for benchmarking both hard drives and solid-state drives. In the CrystalDiskMark performance test, the random sequential read and write performance reaches 4766.67MB/s and 4103.69MB/s, and the 4K part has 59.64MB/s and 191.22MB/s. The PCIe 4.0 x4 test result still surpassed PCIe 3.0 x4 Numerical value. CrystalDiskMark test results select the IOPS value, and the performance of the queue depth of 32 and 16 threads is above 150,000 IOPS.

AS SSD Benchmark is a benchmark program for testing the read/write speed of hard drives and SSD drives. AS SSD Benchmark has become a de facto standard with its synthetic read and writes speed tests, a scoring system, and three separate real-world data copy tests. The read and write speed in the AS SSD test is 4160.87 / 3865.76 MB/s. In 4K-64Thrd reading and writing, it reached 572273 / 931527 IOPS respectively, and the writing speed exceeded the official 750000 IOPS standard.

Finally, looking at the results of the AS SSD Compression Benchmark and Copy-Benchmark test results, the overall reading is stable, and the writing is slightly fluctuating, but it does not affect the overall performance. 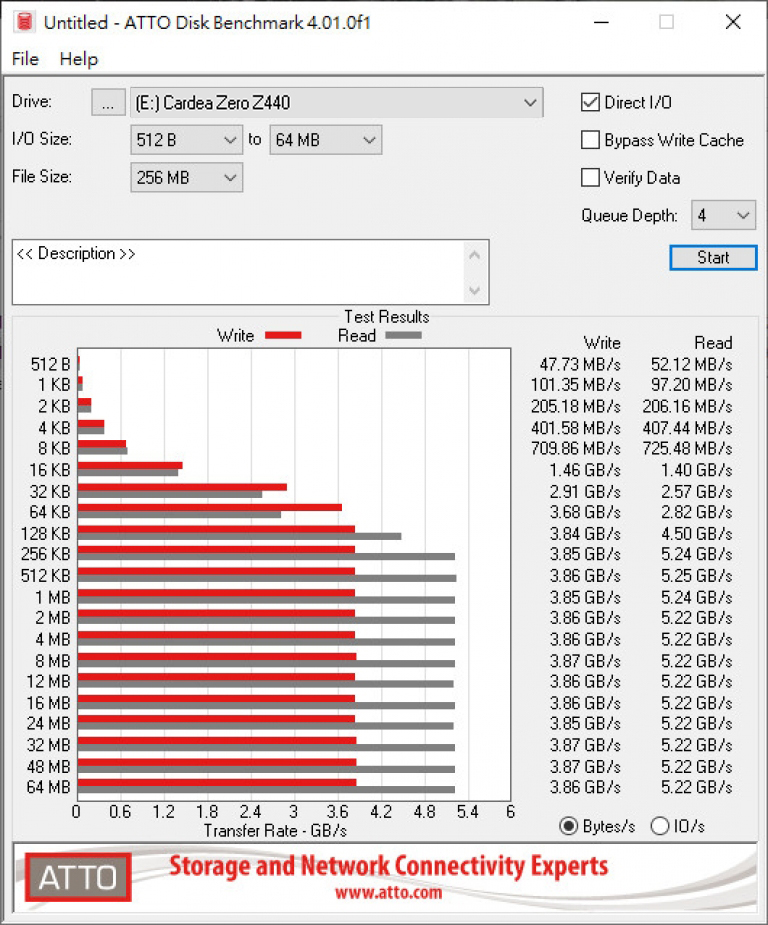 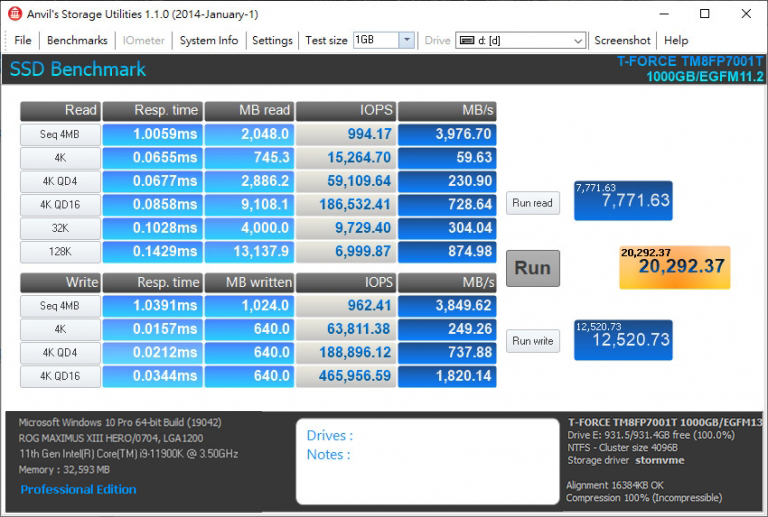 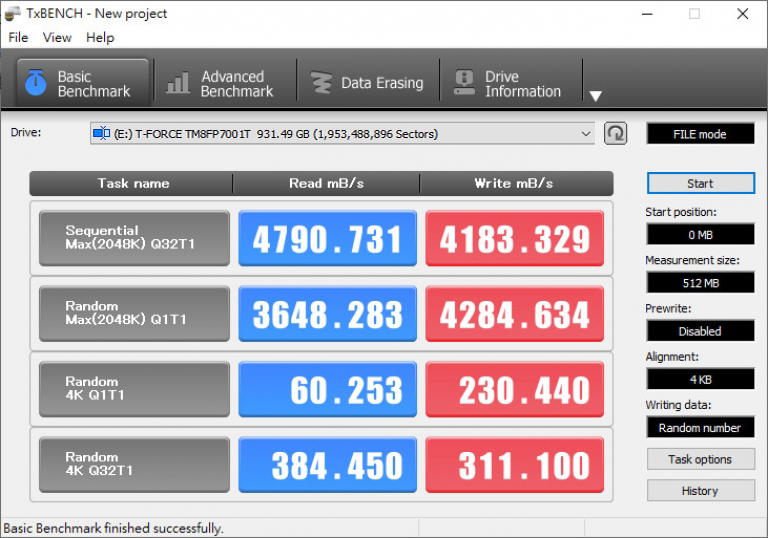 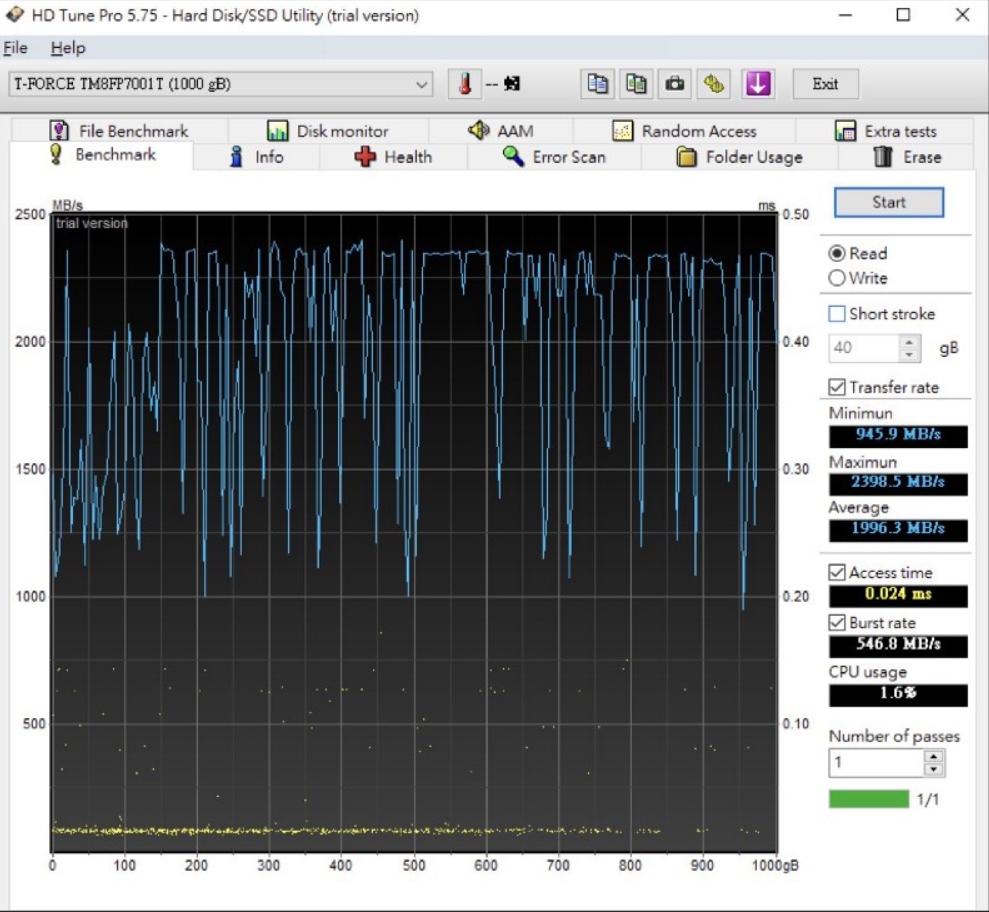 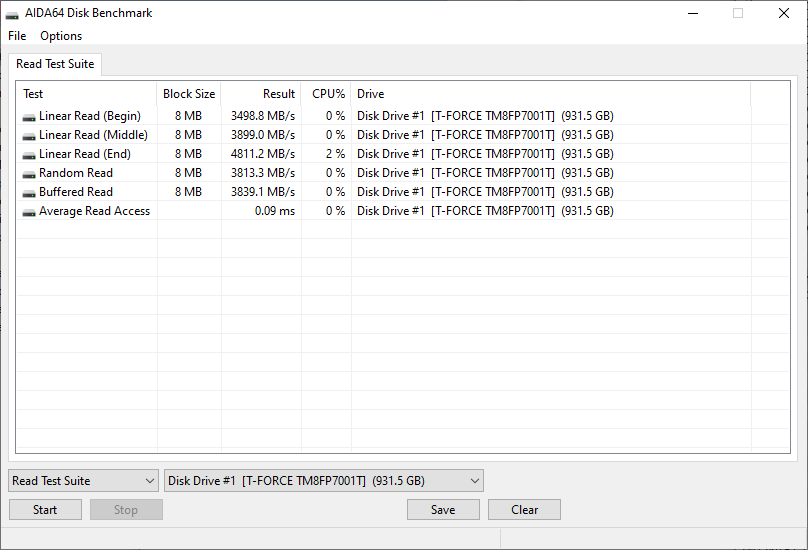 AIDA64 Disk Benchmark is a set of tests for SSD that allows you to check the speed characteristics and temperature conditions during long-term operations. 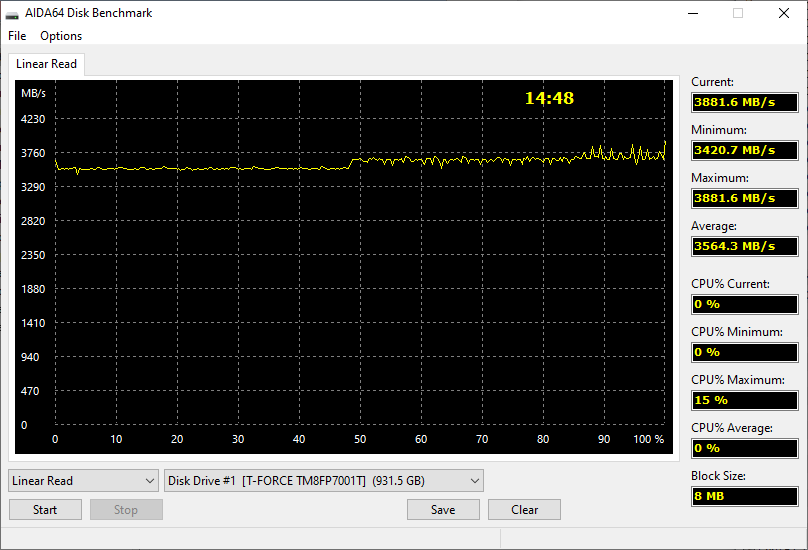 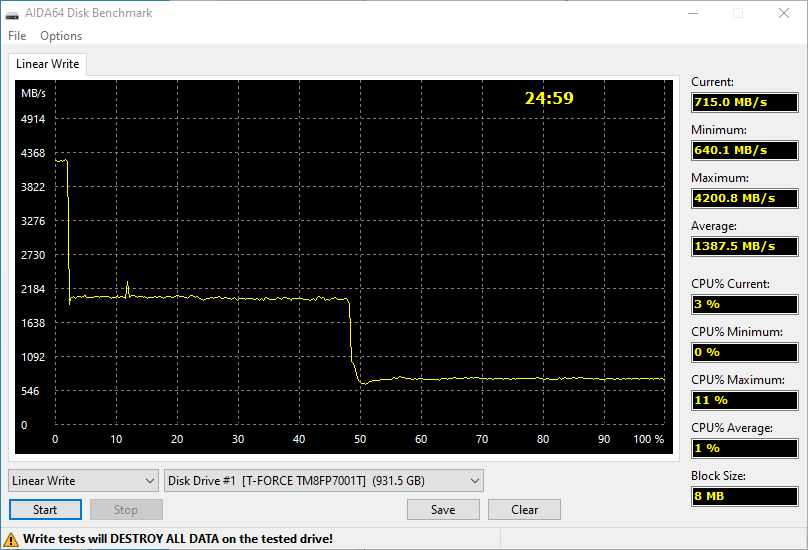 Linear writing is one of the most difficult tests for an SSD. The write speed starts at 4200 MB/s and is maintained until ~22 GB has been written. Next, the Phison E16 controller has to simultaneously copy data from SLC to TLC in order to free up space when the specified capacity is reached and process the incoming data stream in parallel. The speed is maintained at 2025 MB / s, and after 47% of the volume, the indicator drops to 715 MB / s.

T-FORCE CARDEA ZERO Z440 provides excellent access speed. For e-sports players who are keen on games, the time for waiting for levels and maps to be loaded is shortened when playing games, and the respawn time is shorter, which can reduce the loading time of open-world games. situation. The high IOPS performance can ensure a stable and smooth live streaming process and can handle multiple video streaming and writing.

Overall, the T-FORCE CARDEA ZERO Z440’s read/write speed or durability is one of the benchmarks of the current extreme performance. The original factory provides a five-year warranty service. The extreme performance and large-capacity solid-state hard drives are capable in various application environments. Suitable for creators’ video editing, e-sports games, and players who pursue the ultimate performance!