Sabrent balanced its mainstream NVMe PCIe M.2 SSD Sabrent Rocket Q quite differently than the Sabrent Rocket 4 Plus NVMe from our previous review. The focus here was clearly on the price-performance ratio. According to their own statements, they rely on a reduced footprint, QLC memory and an average sequential read speed of 3,200 MB/s, and sequential write rates of 3,000 MB/s. This makes the Rocket Q solid-state module series ideal for systems with PCIe Express 3.0 M.2 slots in M-Key 2280 format. Of course, they also run on modern PCIe 4.0 interfaces, but they are far from exhausting them.

Sabrent offers the Rocket Q NVMe’s in 500GB, 1TB, 2GB, 4TB, and even 8TB capacities. Performance specs vary somewhat by model, with the 500GB being the “slowest” of all, and the 2TB and 4TB being significantly faster than the 8TB. The sequential write rates here are around 3,000 GB/s instead of 3,000 GB/s. The IOPS also varies depending on the model. According to Sabrent, the Rocket Q 1TB consumes 4.5 watts and has an MTBF lifespan of 1.8M hours (260TBW). The Rocket Q is guaranteed for an excellent 5 years after registering the product.

With the Rocket Q, Sabrent is attacking the highly competitive mainstream segment of the solid-state module market. The Rocket Q is not the high-end model, which is why you are satisfied with 3,200 MB/s in sequential read and 2,000 MB/s in sequential write and cover capacities from 500 GB to 8 TB. In our test, we look at the 4TB Sabrent Rocket Q and assess the performance, cooling, scope of delivery, and value for money. 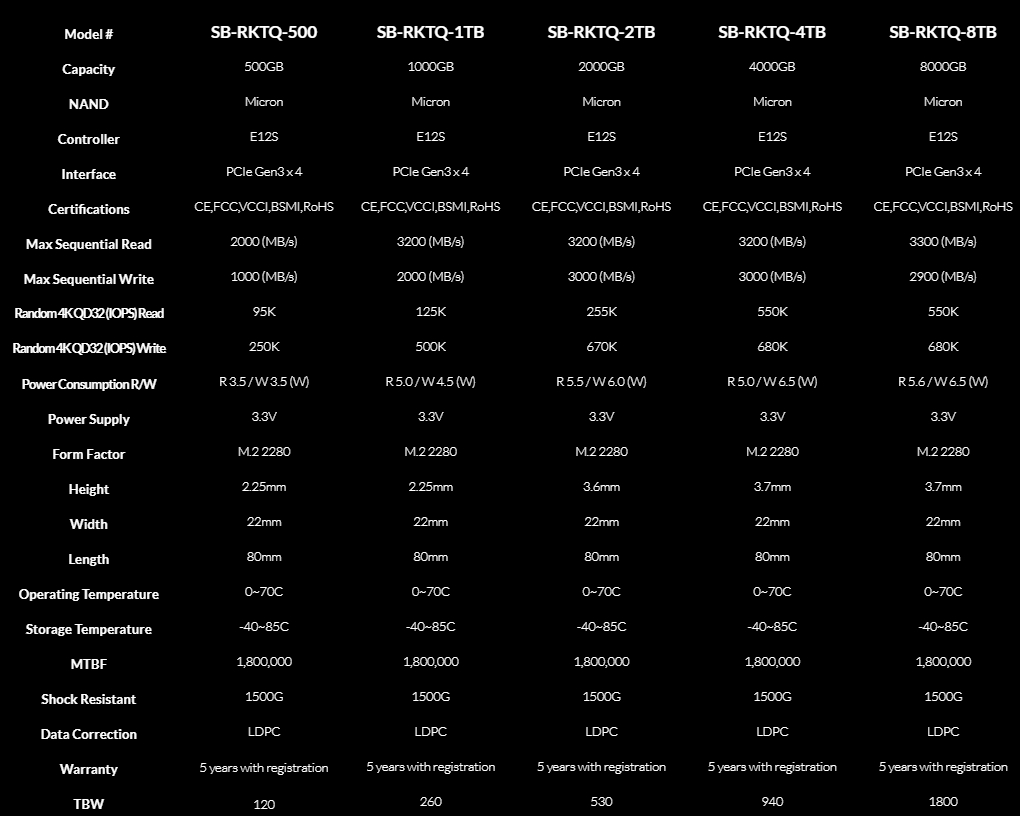 The Sabrent Rocket Q NVMe 4TB comes in a compact cardboard box, which houses a second box made of aluminum. In the aluminum box, we find the SSD and the user manual, and those who have purchased such an SSD can download from the manufacturer’s website a dedicated version of Acronis True Image, which is worth ~ 30 USD. As with the premium NVMe Rocket 4.0, Sabrent relies on complex and very high-quality packaging that is hardly found by any other manufacturer. 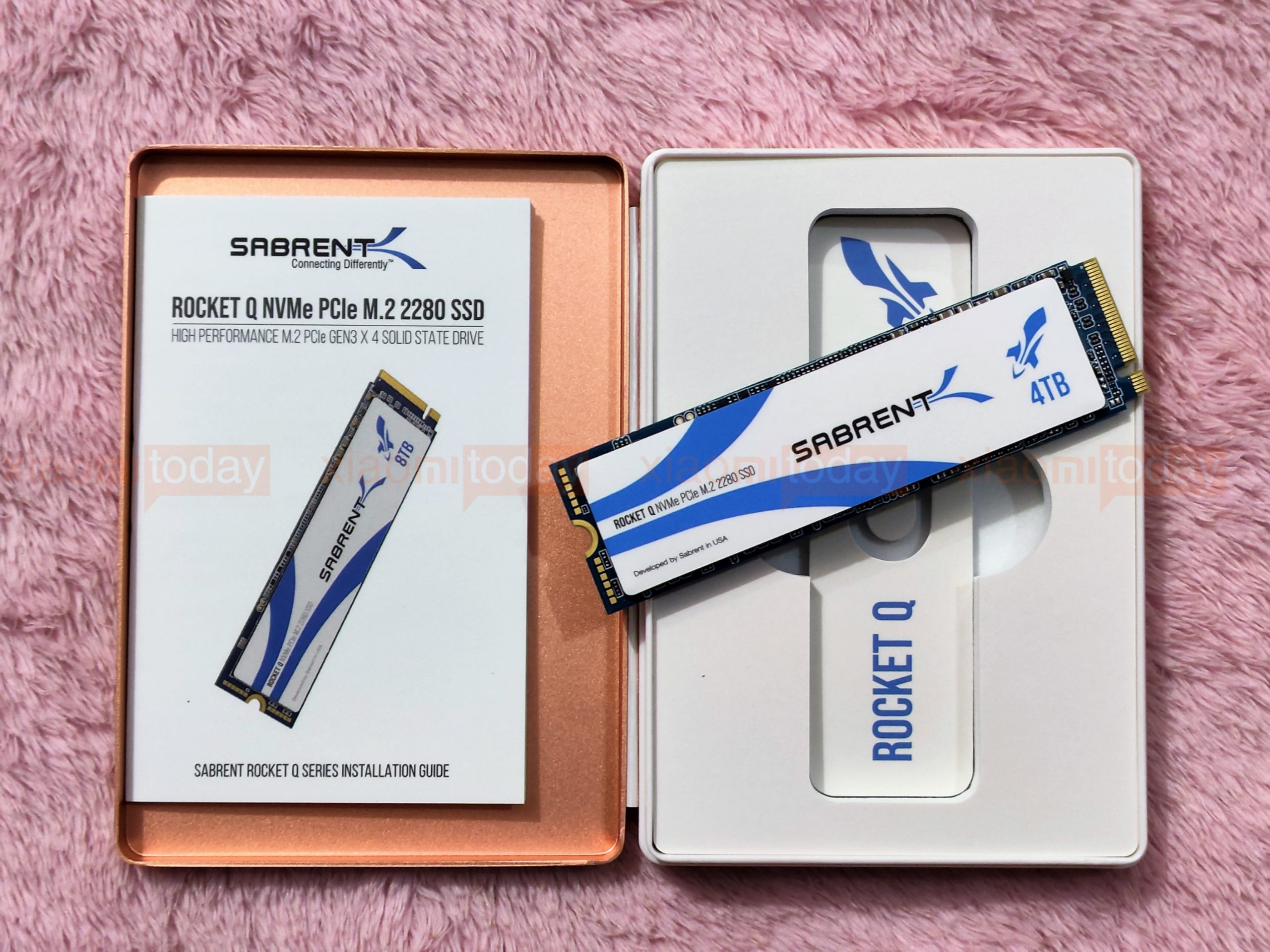 Unpacked from its packaging, the SSD Rocket Q comes in a form that could not be more classic. Nothing actually looks more like an NVMe SSD than another NVMe SSD. It is therefore a model in M.2 format called 2280, a value which refers to the dimensions of the object: 22 millimeters wide by 80 mm long. The thickness varies significantly depending on the Rocket Q model: 1.5 mm for the “small” capacities (500 GB or 1 TB) and a tad less than 3 mm for the larger ones (2 TB, 4 TB, or 8 TB). Nothing very surprising: the large capacities involve placing memory chips on both sides of the SSD. 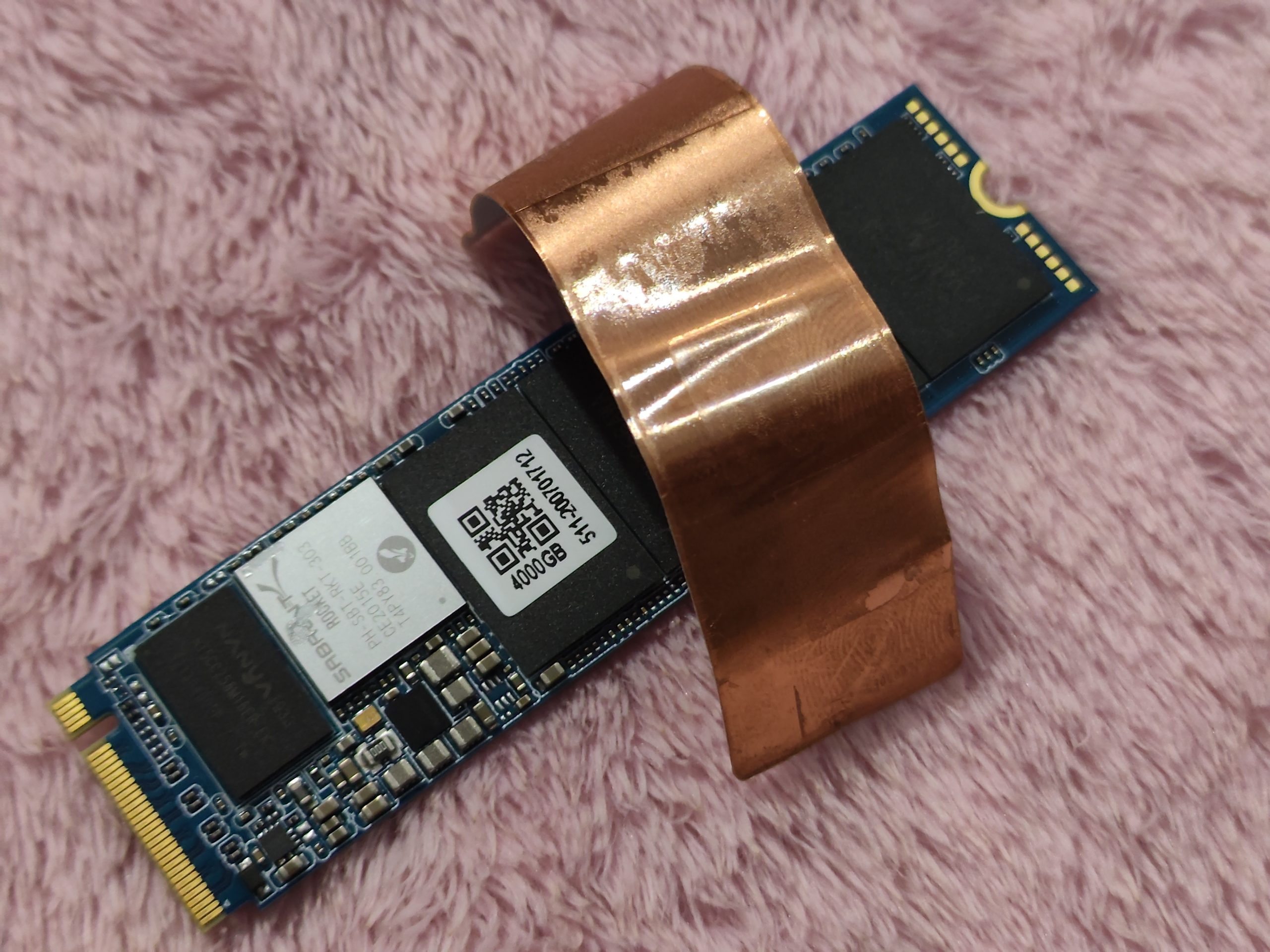 Please note that the label on the front side is not simple paper. Indeed it is a copper plate, which acts as a heat sink. Same as Rocket 4 Plus SSD, the copper foil sticker on the top helps to increase the total thermal capacity, thus delaying the overheating slowdown during long transmissions. Most manufacturers simply stick on stickers that are thermally counterproductive. With the Rocket Q, the thin copper plate spreads the heat over the surface better, even if it is sufficient for optimal cooling. 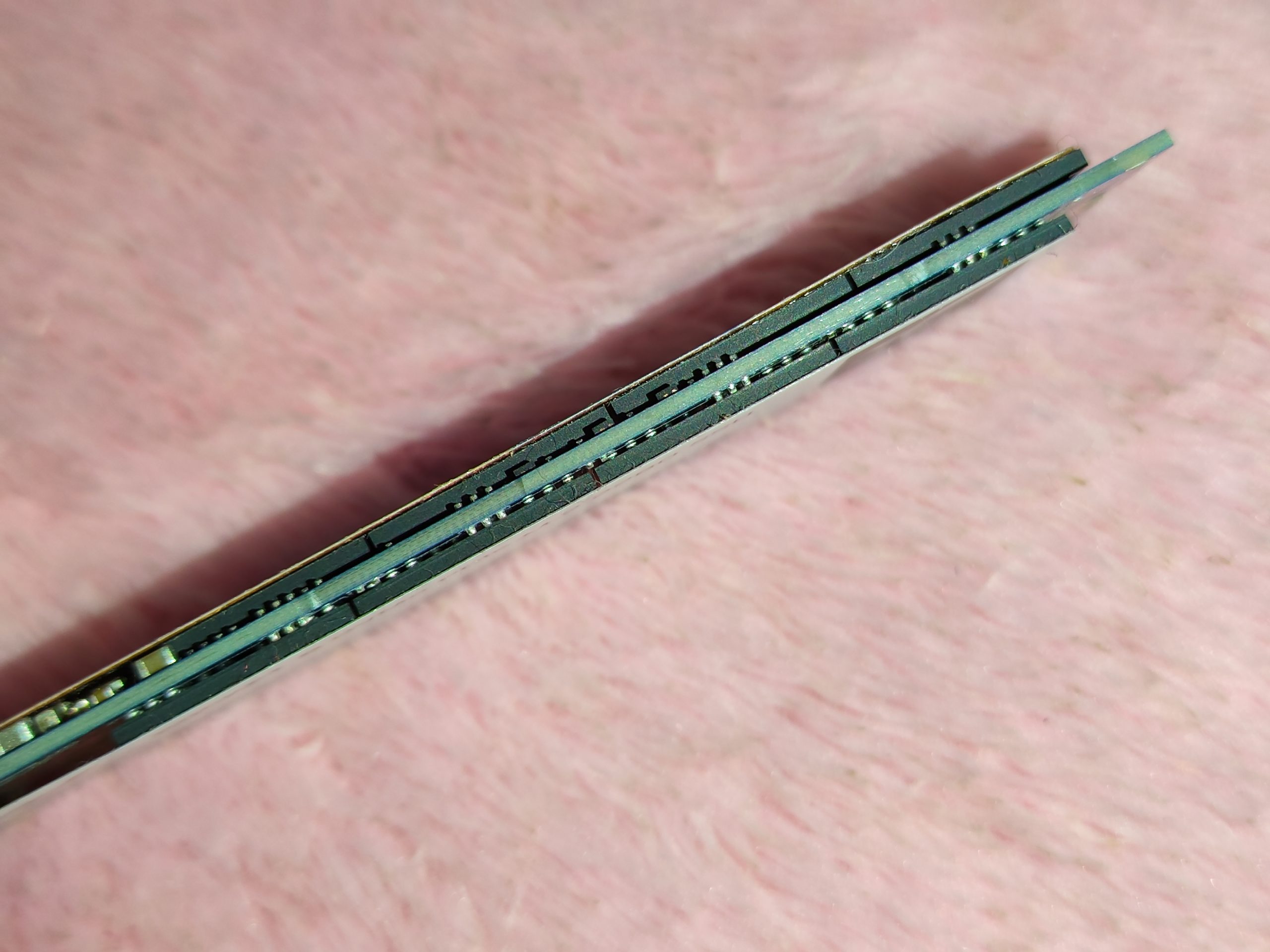 The blueprinted circuit board( PCB ) of the Rocket Q 4TB model ( SB-RKTQ-4TB ) has components on both sides. Aside from the model name and serial number, there isn’t much information on the sticker at the bottom. 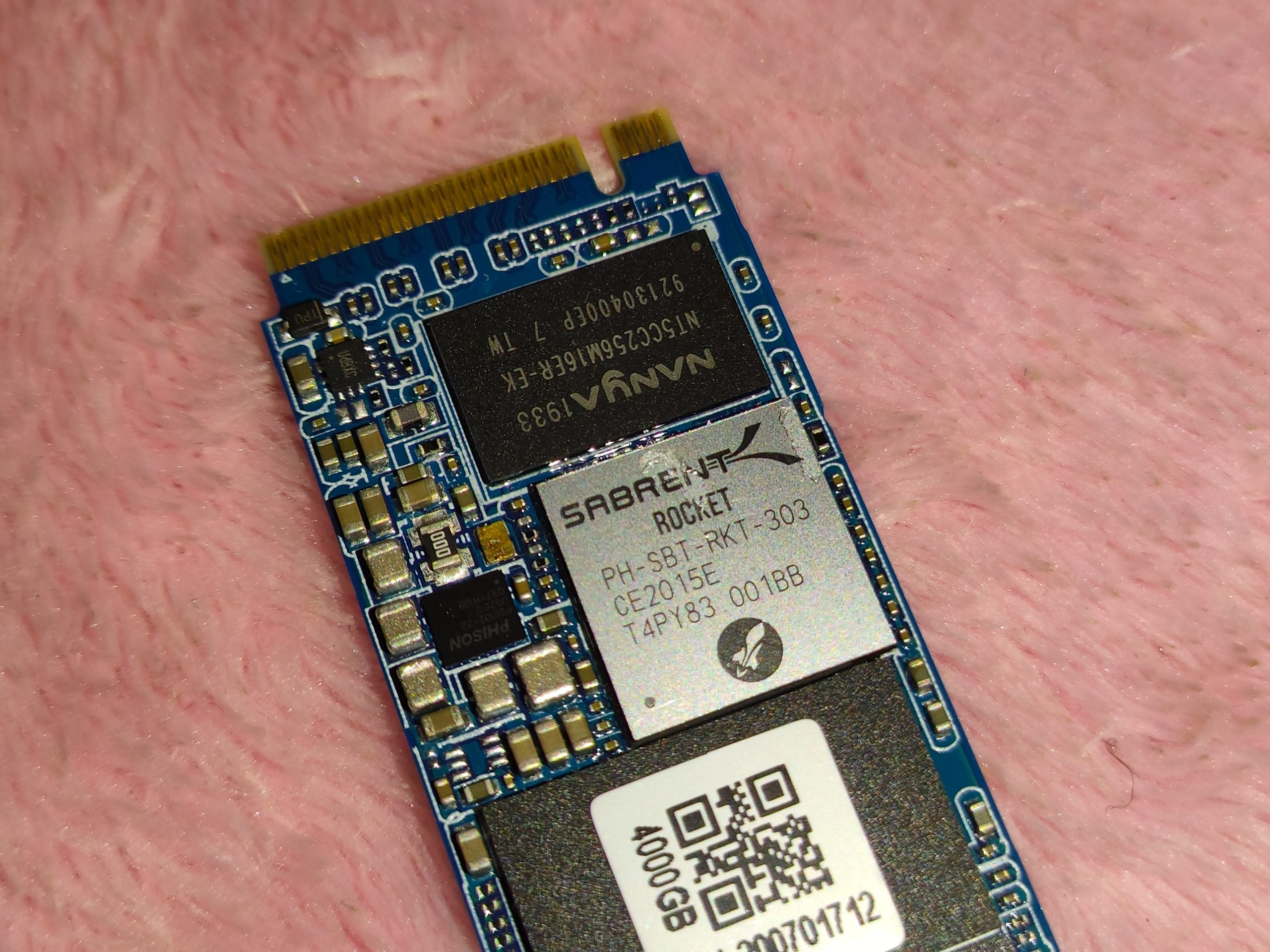 The Sabrent Rocket Q NVMe 4TB model is built around a PHISON E12S controller, which has the model number: PH-SBT-RKT-303, This controller is basically a customized version of the Phison PS5012-E12S with a different heat spreader installed at the top.. Flash memory is more interesting because Phison solutions generally use Toshiba products, but Sabrent claims to use particles from Micron. 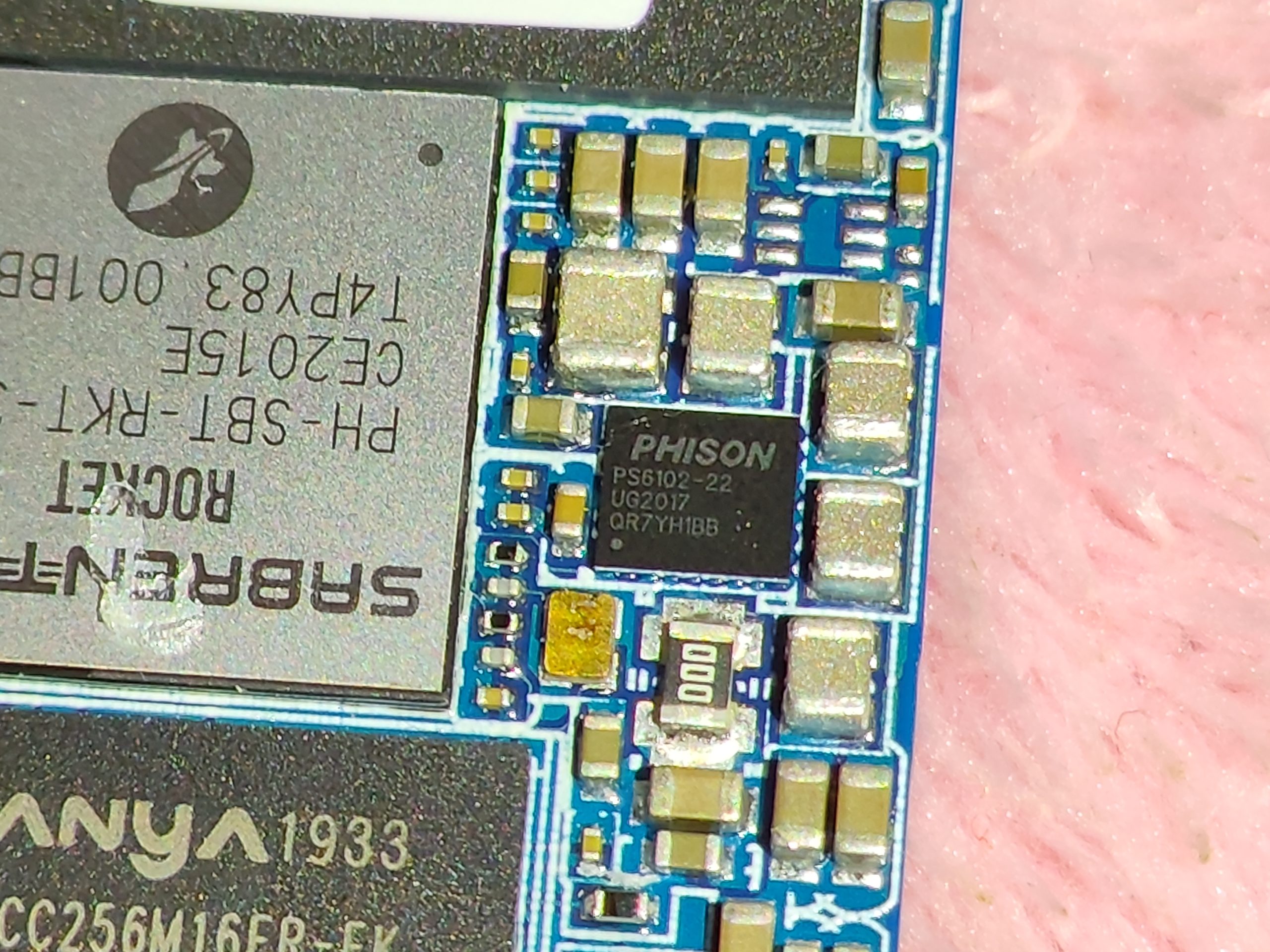 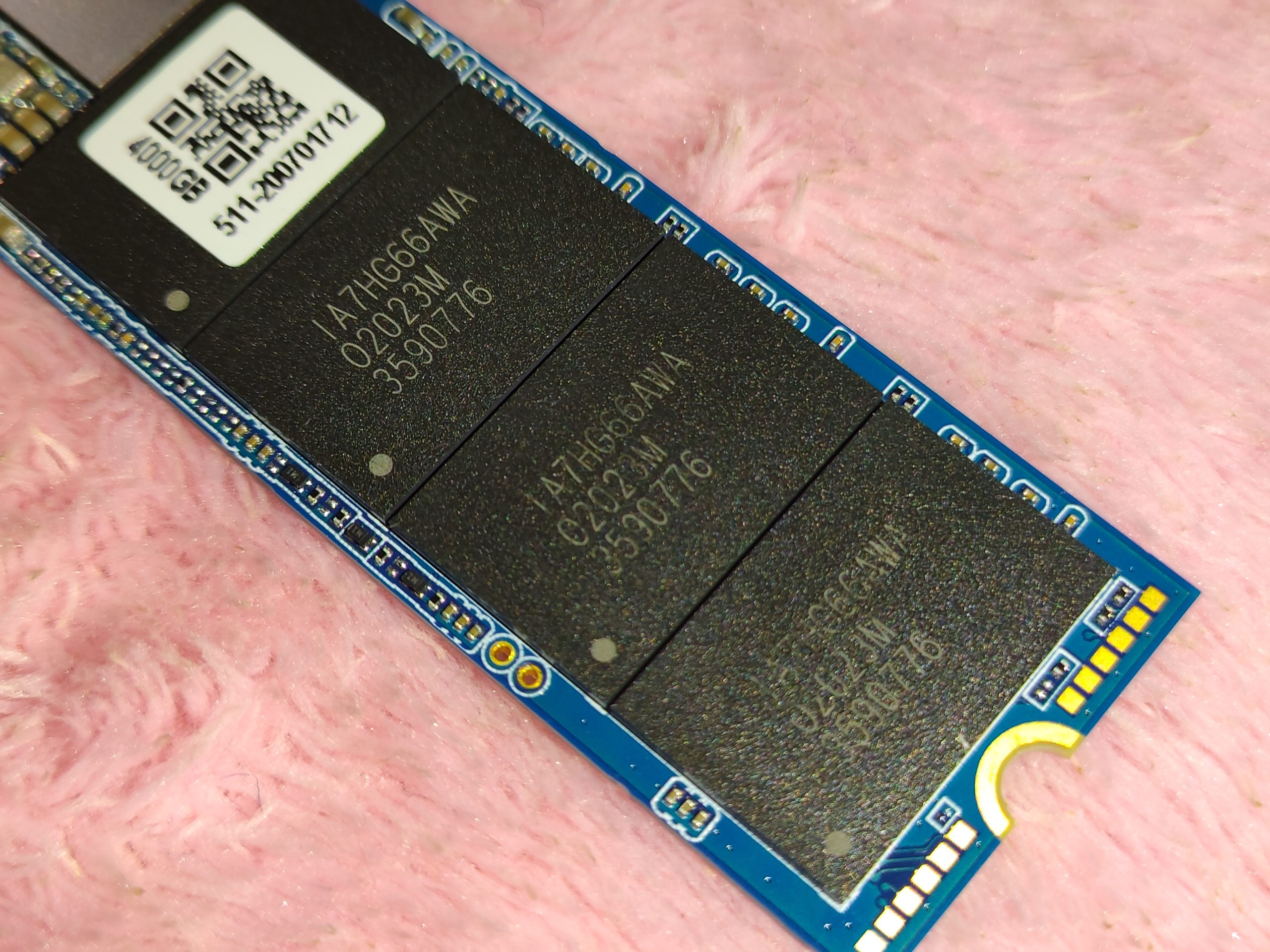 The Rocket Q is equipped with Micron’s latest 96-layer 3D QLC NAND flash memory (IA7HG66AWA) produced by Micron SK Hynix for the cache. Our 4TB sample has 8 pieces (4 on each side). On paper, this can be combined with QLC and TLC 3D NAND memory. How Sabrent achieves such capacity as 4TB and 8TB, in fact, the product naming rules have revealed the information, Rocket Q belongs to QLC 3D NAND products. However, the reference performance is not ambiguous. Sequential reading can reach up to 3,300MB/s (limited to 8TB version), and writing is 3,000MB/s (limited to 2TB and 4TB versions). It also squeezes in 3GB/s write Speed club. 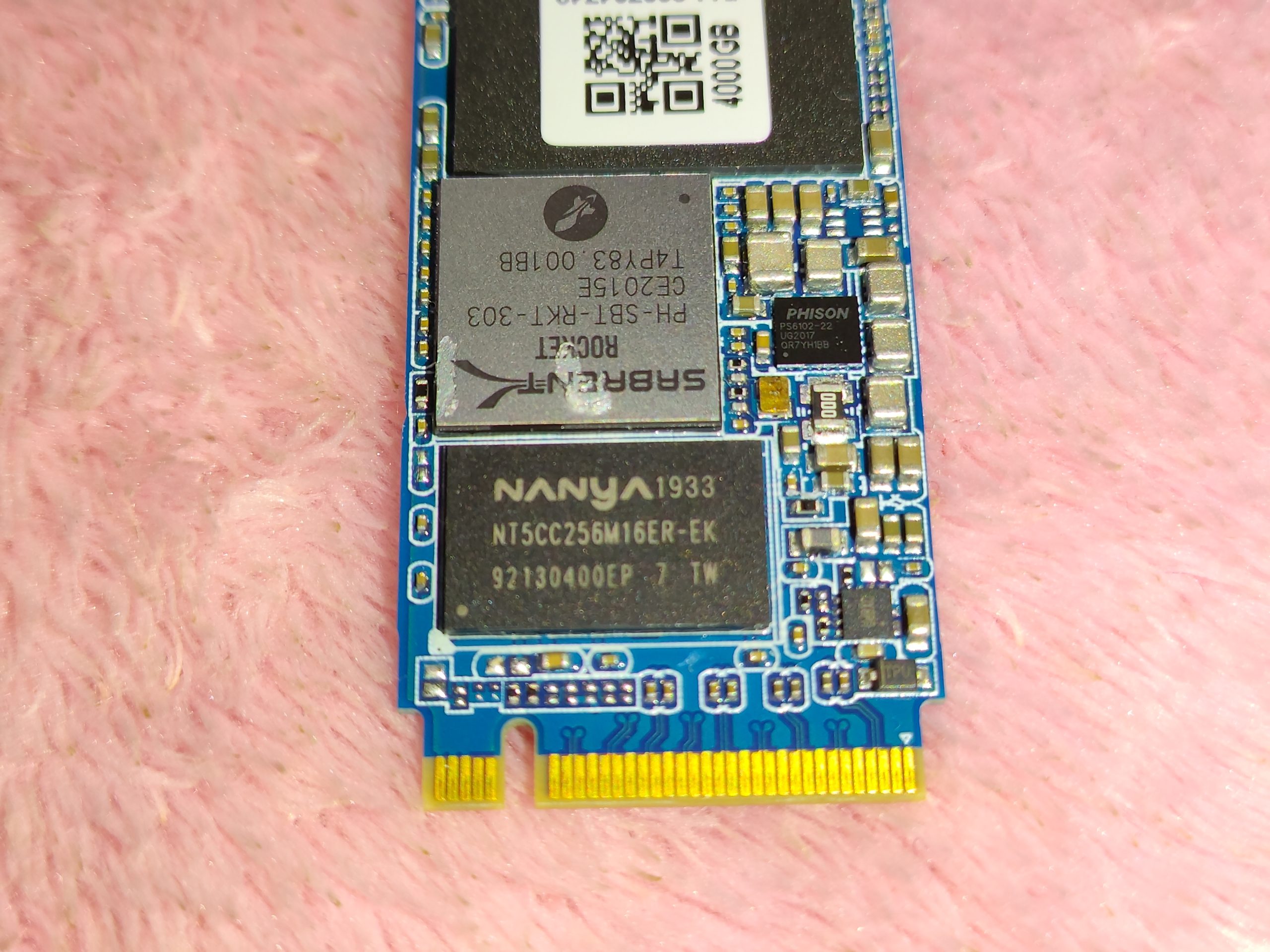 As for the durability that everyone cares about, the common reference indicator TBW (Total Bytes Written) indicates the value, which is obviously low or conservative. Its 500GB version is 120TBW. Compared with the Crucial P2 that was introduced earlier, which is marked with 150TBW, the Rocket Q series has a slightly lower reference value, and each capacity version is not necessarily doubled in equal proportions. 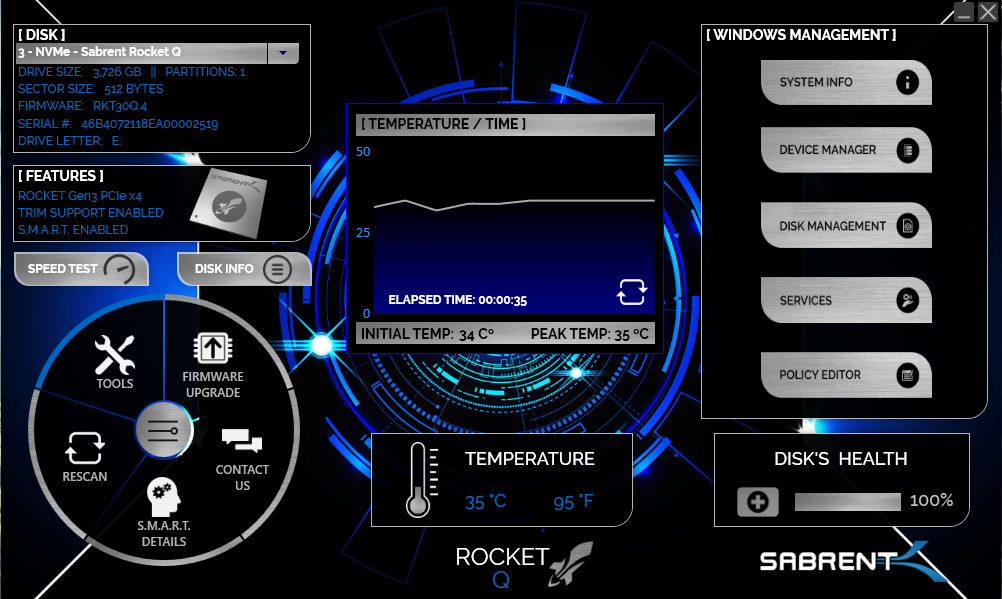 If you are wondering if there is a utility for the disk, the manufacturer offers several. First of all, we have the ROCKET Control Panel, which is used to update the firmware, and monitor the temperature of the disk and the overall health of the disk itself. 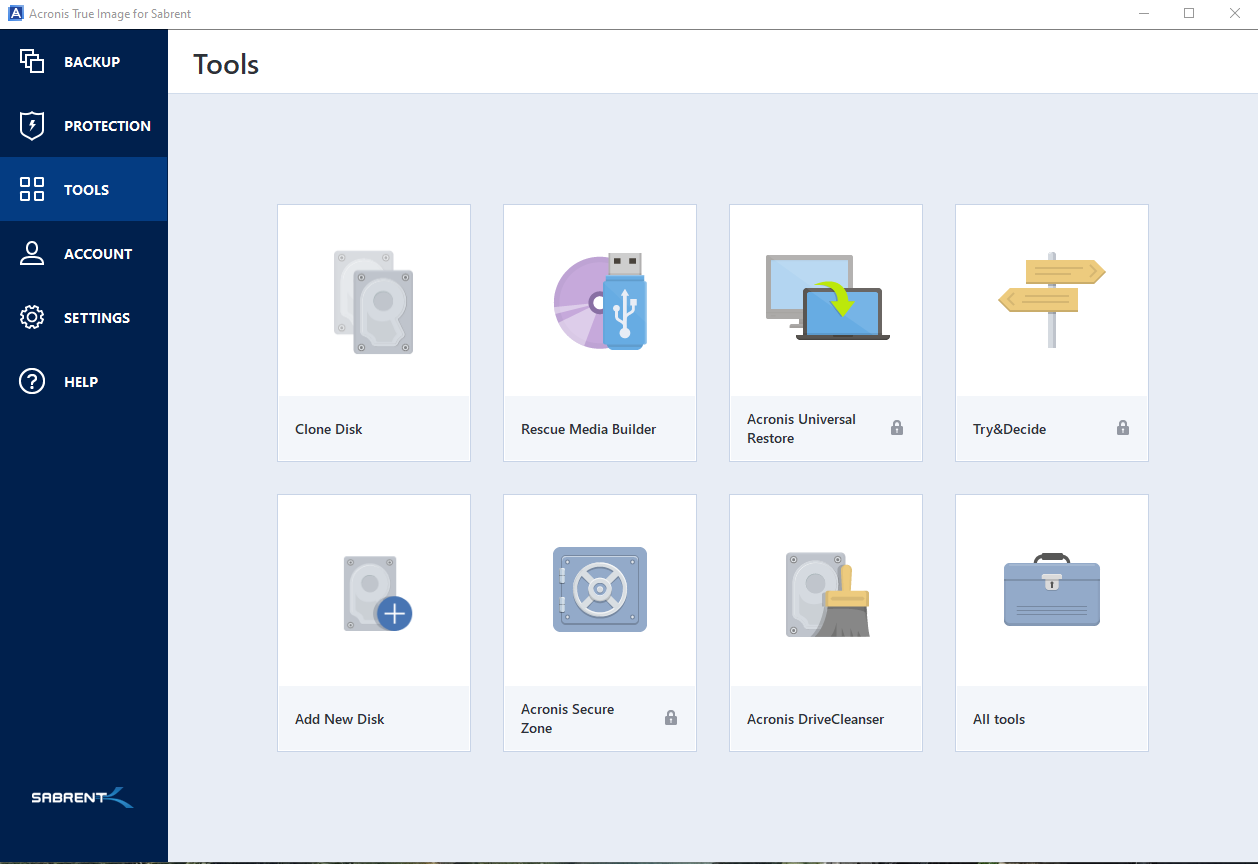 Another program that you can install to disk is Acronis True Image and SSC Software. The former is very suitable, for example, for making backups of your disk in the form of a 1: 1 image, or, for example, migrating an old disk on which you have an operating system to a new one just purchased from Sabrent. The latter is then used to change the size of sectors on the disk, etc. For most customers, the most useful will be Control Panel or Acronis. In any case, it is a very above-standard package of programs, most manufacturers give a maximum of one program to the discs, and some do not give any to the discs, so Sabrent is such a small unique in this respect.

Installed the disk to the COLORFUL-iGame Z390 Vulcan X V20 motherboard with an Intel® Core™ i9-9900K processor. RAM was provided by Asgard with the Loki W3 Series 2.0 RGB 32GB (16GB*2) DDR4-4000. We used the Windows 10 Pro x64 operating system, with all the updates up to date – we only use operating systems, benchmarks, and licensed games, updated in terms of updates. For the best repeatability of the tests, the SSD was connected as a secondary drive to the system. For this we are using the following test Setup:

To test the performance of solid-state drives, we used some well-established hard drive Benchmark software.

Before the benchmark test, we will know the basic information of Sabrent Rocket Q 4TB NVMe M.2 SSD through CrystalDiskInfo. In CrystalDiskInfo, we can see some basic characteristics and health of storage, including interface, transfer mode, serial number, firmware, and other information. It displays everything from temperatures, to the number of hours the device has been powered. 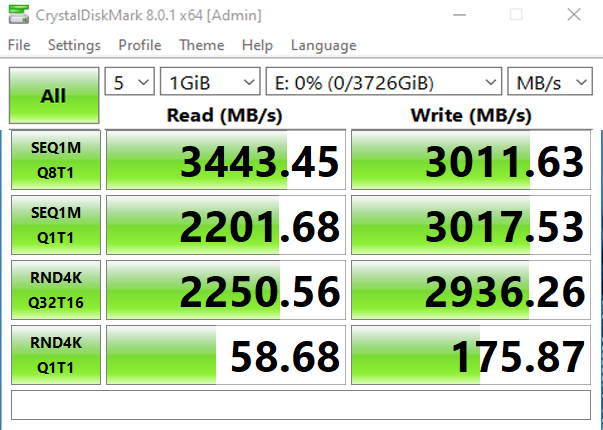 Let’s take a look at the performance test of Crystal DiskMark, The Rocket Q peaked at 3443MB/s read and 3011MB/s write at Q8T1 standard sequential speed. 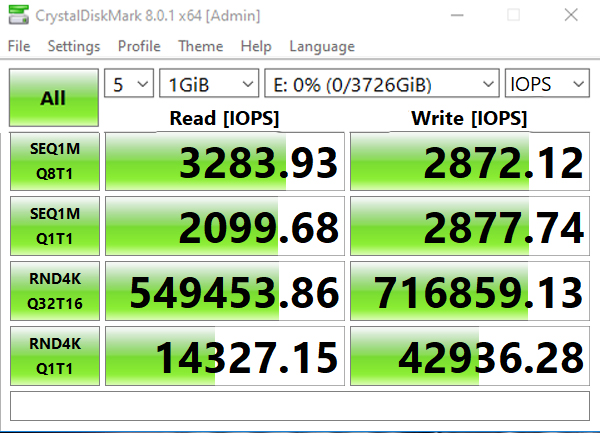 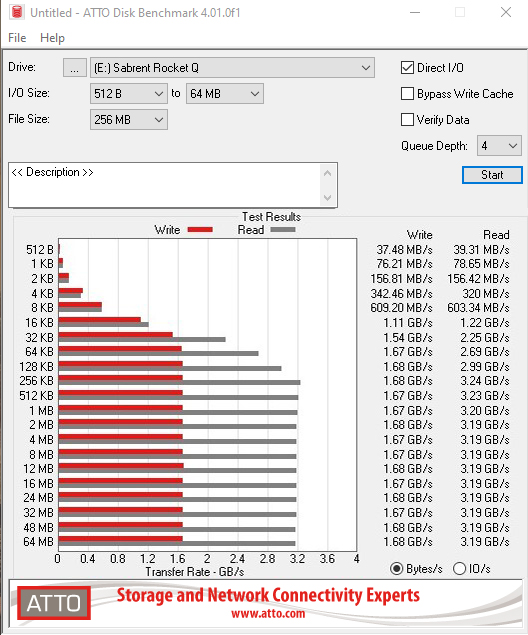 From the results of ATTO Disk Benchmarks, The writing speed stabilizes from the 64 KB line, we obtain 1680 MB/s. In reading, the speed increases gradually to reach approximately 3200 MB/s from the 256 kb line. The speed announced by the manufacturer (3200 MB/s) is compliant with the reading. In writing, the theoretical speed (2000 MB/s) is slightly overestimated. Overall the results are more than satisfactory for this type of SSD. 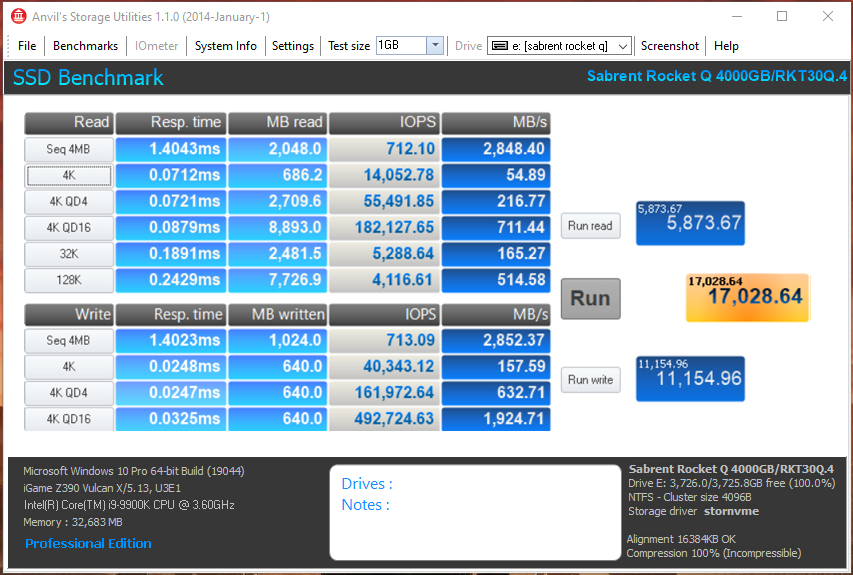 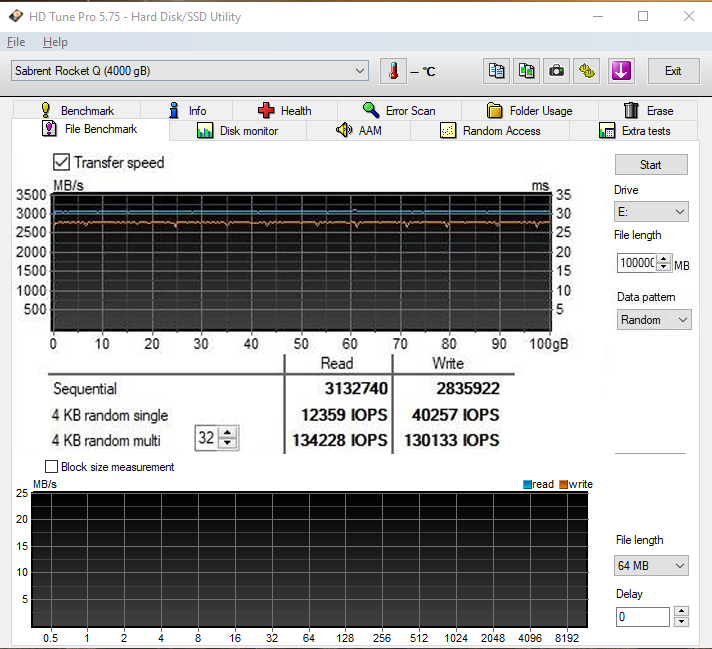 HD Tune Pro can test the speed of reading and write outside the buffer by customizing the file length and data mode. By selecting a 100GB file length for testing, the average reading speed of Sabrent Rocket Q is about 3100MB/s and the writing speed is 2800MB/s, the overall curve fluctuation is small, and the result is quite satisfactory.

TxBENCH is an efficient and professional SSD performance benchmark software. The latest version of TxBENCH has powerful functions. It not only has basic test items, but the software can also help users customize test items. TxBENCH software is convenient and easy to use and supports free setting tests. The block size, queue depth, etc., as well as the full disk, write test, both FILE and RAW are supported. 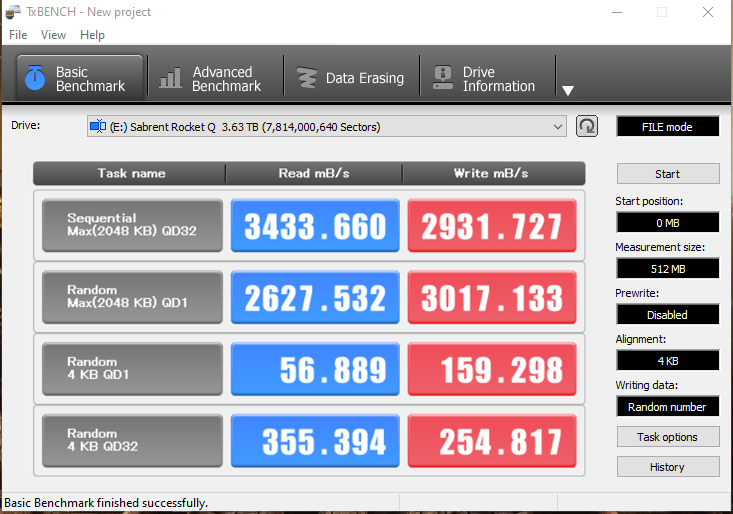 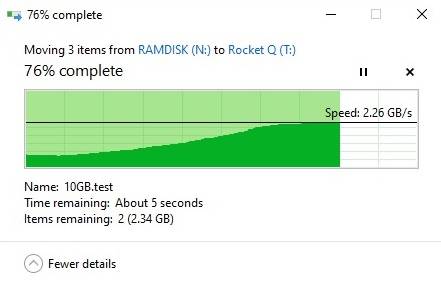 We also tested the actual copy speed of Sabrent Rocket Q SSD. After copying the 15GB files, we found Rocket Q took about 6.72sec to complete the copy of all files. The transfer, the write speed is 2.26 GB/s. 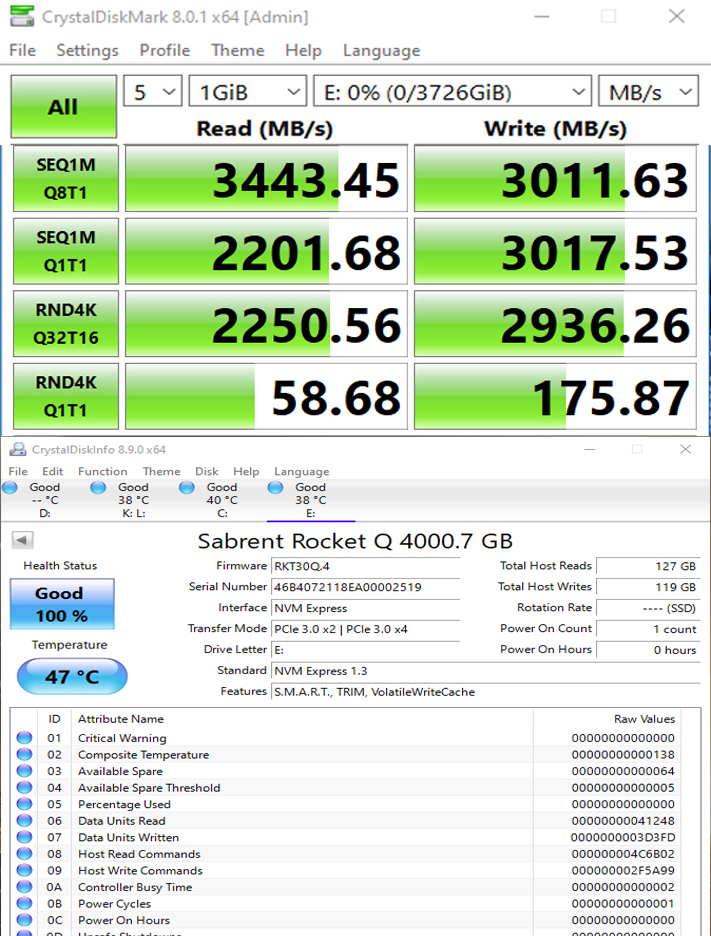 The Rocket Q model from Sabrent is, in my view, a very interesting model. It is aimed mainly at people who require a large capacity SSD disk, and at the same time do not need such a high endurance for overwritten data, so it is a storage type disk. That is why the offered variant with up to 8TB is interesting. The Rocket Q NVMe SSD did surprisingly well. The pretty unique packaging in which the Rocket Q is delivered, which has the premium touch and protects the storage medium during transport, is particularly worth mentioning. The 4TB variant we tested is fast, but the variants with 1, 2, or 8 TB are a good deal faster on paper. 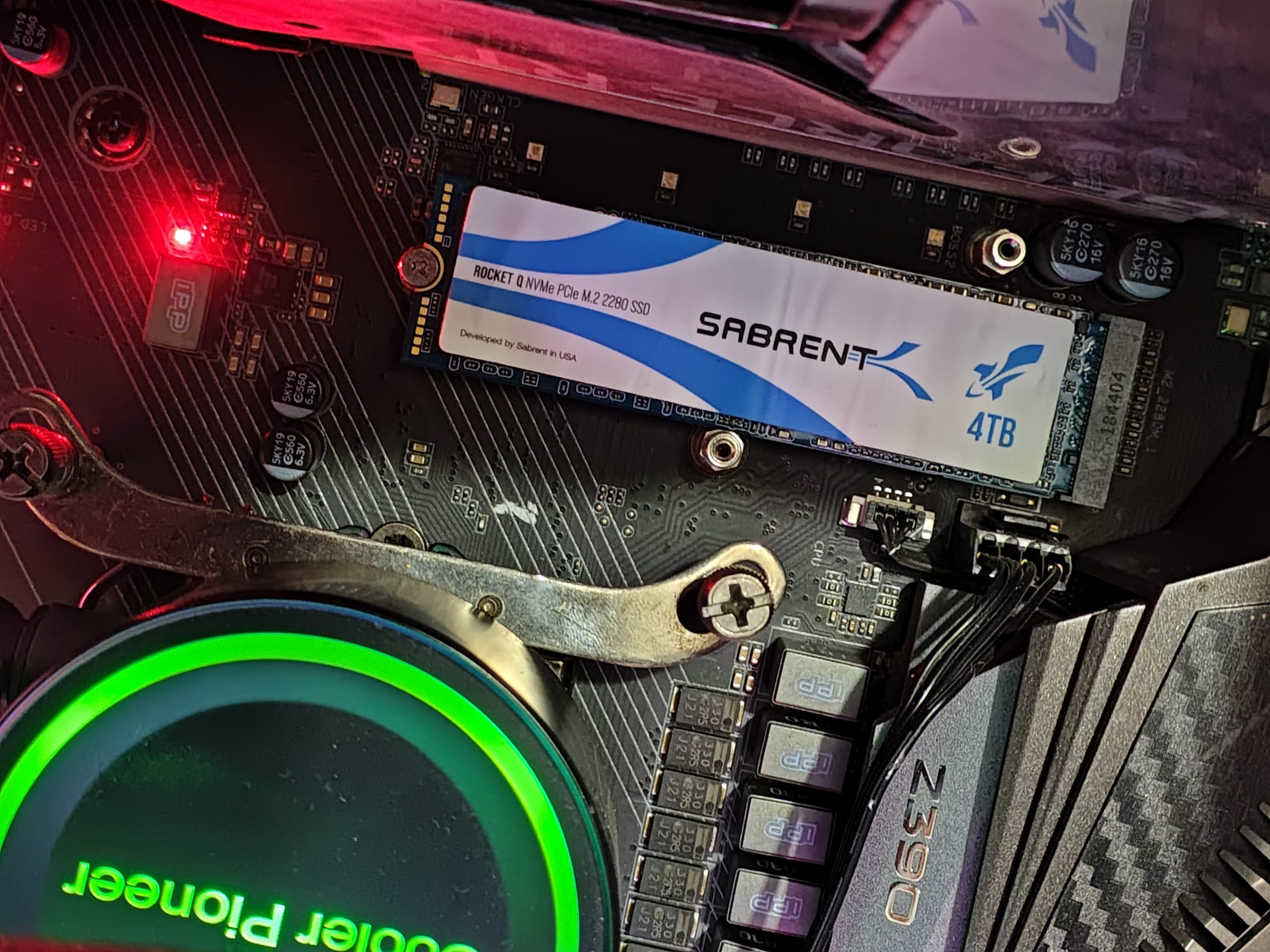 When choosing the components, Sabrent relied on well-known names such as Phison, Micron, and Kingston and is also self-confident with the five-year guarantee. The special copper plate should not go unmentioned, as it contributes positively to the distribution of waste heat, especially in systems that do not have a separate NVMe cooler. Otherwise, the Rocket Q stays cooler than the Samsung 970 Evo and the WD_BLACK AN1500.

In fact, whether it is for daily office use or running games, Sabrent Rocket Q has no problems handling it. However, in post-editing video editing, PS retouching, such as professional work and high hardware pressure, Sabrent Rocket Q The stable and high-performance advantages of solid-state drives can also be well utilized. Even when the remaining space is insufficient, it can basically maintain the same performance as that of an empty disk, which also enables content creators to be more efficient in an increasingly fast-paced environment. Process audio and video files, output your video for the first time, and be one step closer to the video explosion network.