U disk, an item that we cannot do without our daily work and life, especially office people, they often use U disk, why? Mainly because it is easy to use, small in size, and easy to carry. I remember that my first USB flash drive was still in the usb2.0 era, and the writing was only about 6MB/s. Today everything is changing with the advancement of technology, such as this TEAMGROUP C211 USB3.2 Flash Drive, written up to 140MB/S, and reads up to 160MB/S. The U disk is made of aluminum alloy, which not only gives the USB flash drive a refined texture, but also offers a high standard of data protection and durability. body, which not only has a good texture but also better protects the chip. Next, let us take a look at this USB flash drive. 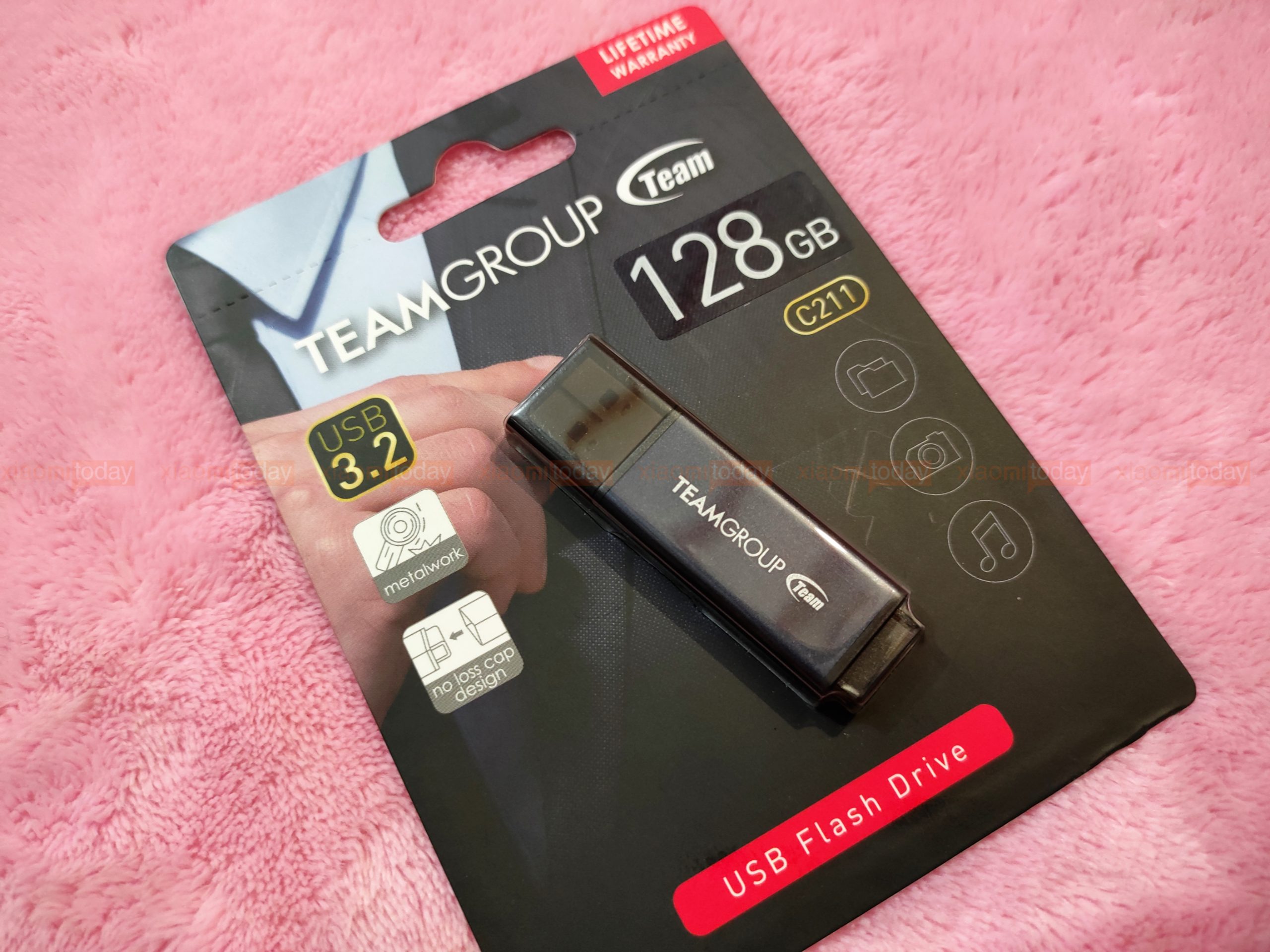 We can see that TEAMGROUP C211 uses disposable paper packaging, the eye-catching Gentleman Blue color is the representative color of this product and the overall design also matches with the man’s suit. On the front of the package, you can see the design of the TEAMGROUP C211 Flash Disk.

We are reviewing the 128GB version this time, but there is also 256GB. Some specifications of the product can be clearly seen on the front. Everyone may know after reading the package. The back of the package explains all kinds of features and TEAMGROUP C211 comes with a Lifetime Warranty.

TEAMGROUP C211 uses an all-metal shell, which is very good in terms of appearance and the weight of the C211 is only 8g, which is really super light! The USB flash drive feels delicate and rich in texture, and its elegant atmosphere is quite outstanding. The color of the C211 may be dark gray at first glance, but it is actually dark blue with a matte texture and the eye-catching logo of “TEAMGROUP” is naturally harmonious and the USB 3.2 logo is on the other side as well as the storage capacity.

In terms of size, the measurements of C211 are 56mm×17.2mm×7.6mm which is very small, not as long as my finger, or slightly smaller than a piece of chewing gum. Holding it in the hand, it was unexpectedly light, and could not feel the weight at all. In addition, the aluminum shell also brings a good feel, and can also effectively protect the internal structure of the flash drive. The hollow design at the tail makes it more convenient for you to carry it, and it is also very good to hang a hand strap or a small limit object.

It is worth mentioning that the USB-A interface protected by the cover on the front of the fuselage is designed to be black and translucent, and the connector design inside can be clearly seen. The protective cover of the USB-A interface can be “reversed” to the end of the fuselage after being removed, to prevent the protective cover from being lost. After the C211 is connected to the Laptop, there will be a red LED indicator at the end, and a flashing prompt will appear when data is accessed.

In terms of capacity, the actual capacity is 117GB, because the manufacturer’s capacity algorithm and system algorithm are somewhat different. This C211 offers a choice of up to 256GB, and the review unit is 128GB, the actual capacity 117GB on PC. There is a little difference, but the back packaging also indicates that not all the space can be used for data storage. 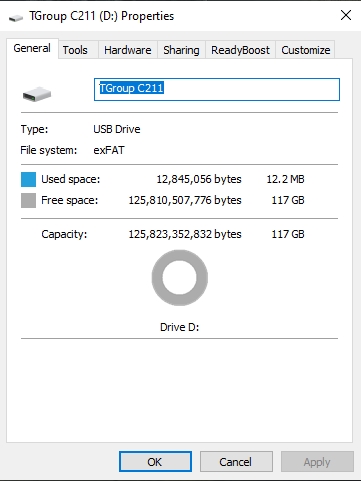 After reading the actual capacity, let’s perform an actual speed test for the TEAMGROUP C211 flash drive, we used some well-known Benchmark software for testing. 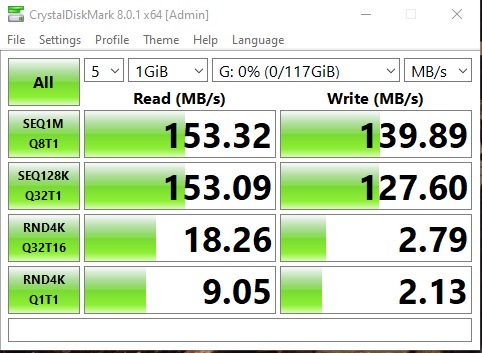 It can be seen that the read speed of the TEAMGROUP C211 flash drive is about 153.32MB/s, and the write speed is also about 139.89MB/s, which is better than most small storage devices such as flash drives on the market, the 4K continuous read speed was 18.26MB/s, and the 4K continuous write The speed reaches 2.79MB/s. From this point of view, whether it is copying a large-capacity single file or a large number of scattered small files, the C211 can complete file transfer with high efficiency. 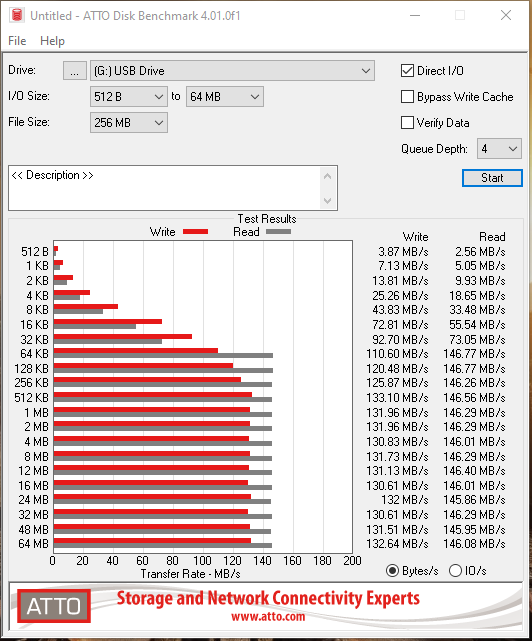 ATTO Disk Benchmark is a disk/network performance test tool produced by ATTO. The software uses a 4MB test package. The data package is read and written according to 512B, and 64MB. The reading is also at 146.77MB/s, The write speed is 133.10MB/s, and the performance is quite excellent in terms of USB 3.2 Gen1 specifications. 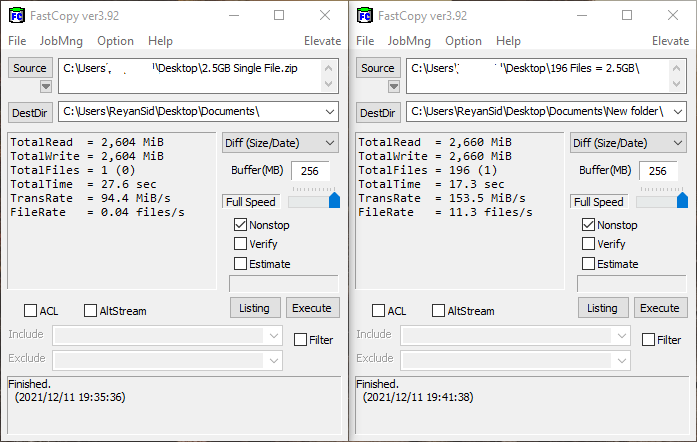 Then we use FastCopy to measure the actual data access speed of the C211. The left side of the picture shows the transmission speed of a single file of 2.5GB, and the Multiple 2.5GB files speed result.

Speed Test of Copy and Paste in PC 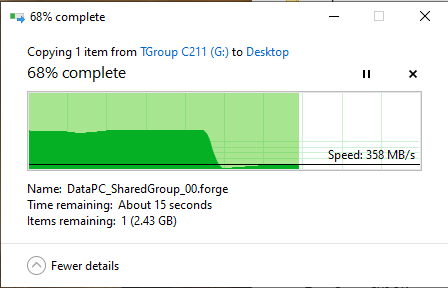 The actual reading and writing speed of TEAMGROUP C211 is first tested with a single 8G file. The speed of pasting from the Flash Drive to the PC Disk is basically stable at up to 400MB/sec. This speed is the same as the continuous reading measured by the software just now. The speed is comparable. 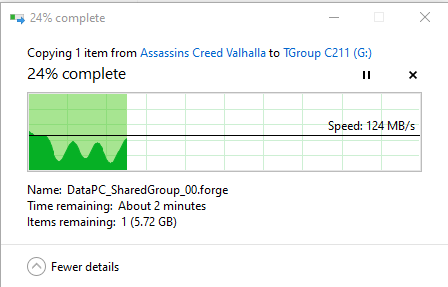 Then copy from the computer to the TEAMGROUP C21 USB flash drive, and the measured continuous writing speed is 124MB/s, which fluctuates around, but it is basically stable with no major fluctuations. With this read and write speed, copying files in daily work can meet the needs of users. 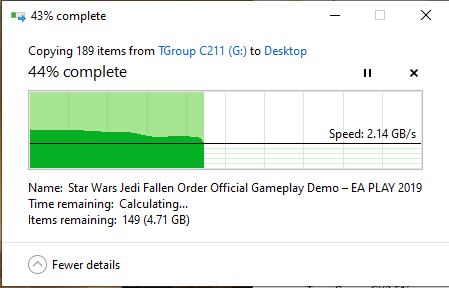 Then use a large number of photos to test the read and write speed of its small files, and its read speed reached 2.14GB/sec. This speed surprised me. I tested it several times and it was the result. It seems that it reads small files. Speed ??is very advantageous. 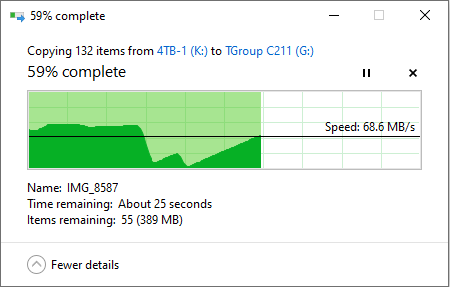 The writing speed of small files fluctuates greatly. The average speed can reach about 68.6MB/s. If it is not for writing a large number of small files, it does not need to wait too long.

TEAMGROUP C211 FLASH DRIVE, with a small size and metal build, has excellent portability and exquisite appearance. its extremely mini design is still amazing. In addition, it is completely “minimalist” without any fancy design, which is very suitable for its commercial application positioning. The 8g weight is also more convenient to use, plug and play. Coupled with a lifetime warranty, it also provides us with a solid after-sales guarantee, so that we can use it with confidence. Its reading and writing speed, the daily office copy files without pressure, can bring us great convenience.