Recently, handheld manufacturer AYA has upgraded its performance of Win10 handhelds based on the AMD platform and brought a handheld called AYANEO 2021 Pro. Actually, the company announced two models: AYANEO 2021 Pro and AYANEO 2021 Pro Retro Power. These handhelds are not only flexible and portable but also have stronger performance than other types of handhelds on the market. It can bring us a handheld PC gaming experience that is not limited by space, and you can play 3A games anytime, anywhere. Today, we got AYANEO 2021 Pro, which is Powered By AMD Ryzen 7 4800U, so, let’s take a look at how this handheld performs. 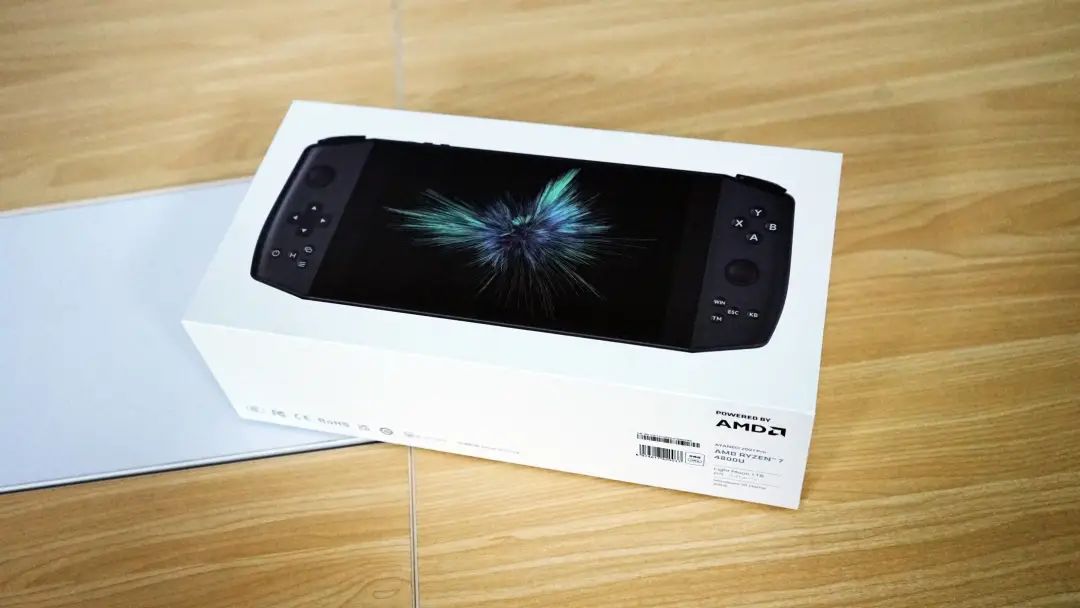 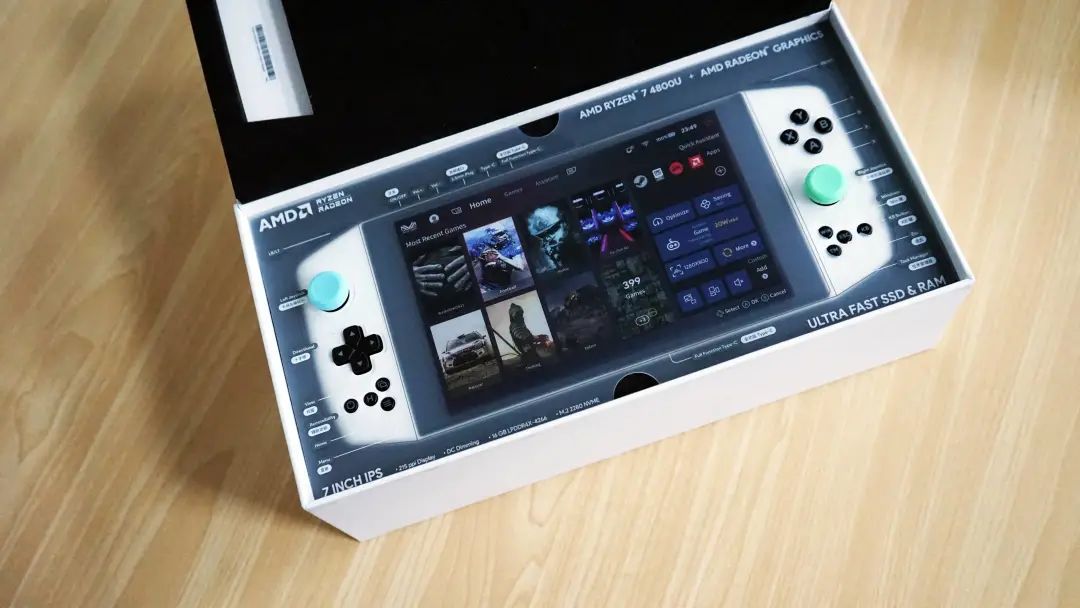 Opening the box, what you see is a semi-transparent hard card marked with the basic buttons. This card can really help users quickly understand the button functions when they use it for the first time. In addition, the accessories attached to the machine are as follows: one Type-C to C data, two Type-C to A adapters, one PD fast charging head that supports up to 60w, and three standard power adapters. 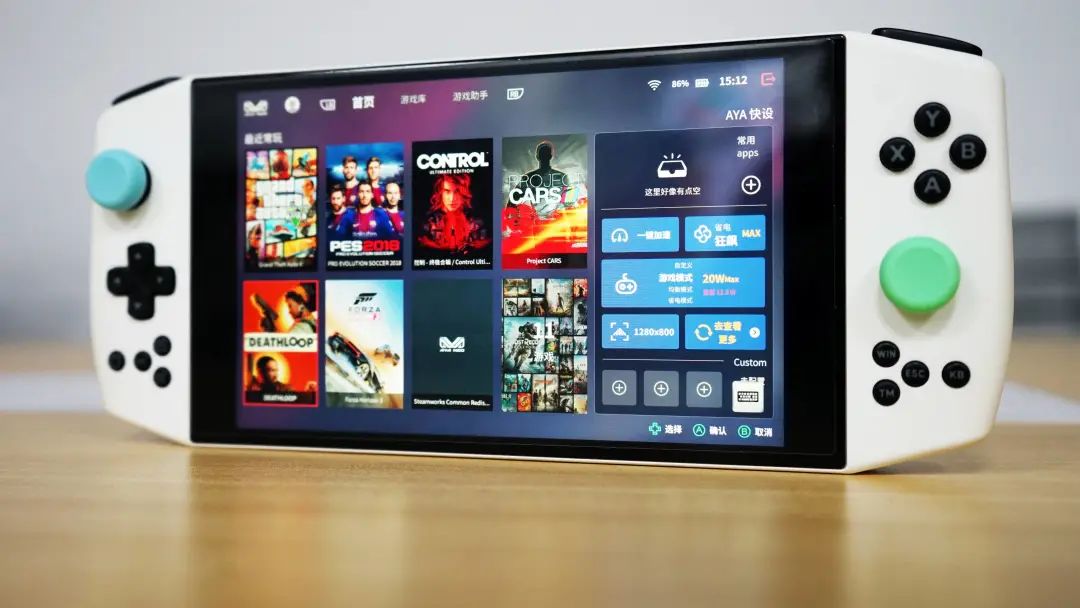 Take out the product body, AYANEO 2021 Pro uses a very conventional handheld design. On this product, you can see the shadow of successful products such as Switch and PSP/PSV. The angular black and white body is still recognizable degree.

From the front, AYANEO 2021 Pro uses a 7-inch 16:10 screen with a screen resolution of 1280*800, 78% NTSC, and 500 nit brightness. Although the resolution is not high, the display effect of this screen is good, the colors are full and bright, and the display has no smear. Of course, you don’t have to look forward to descriptions such as delicate pictures and sharp and clear fonts. 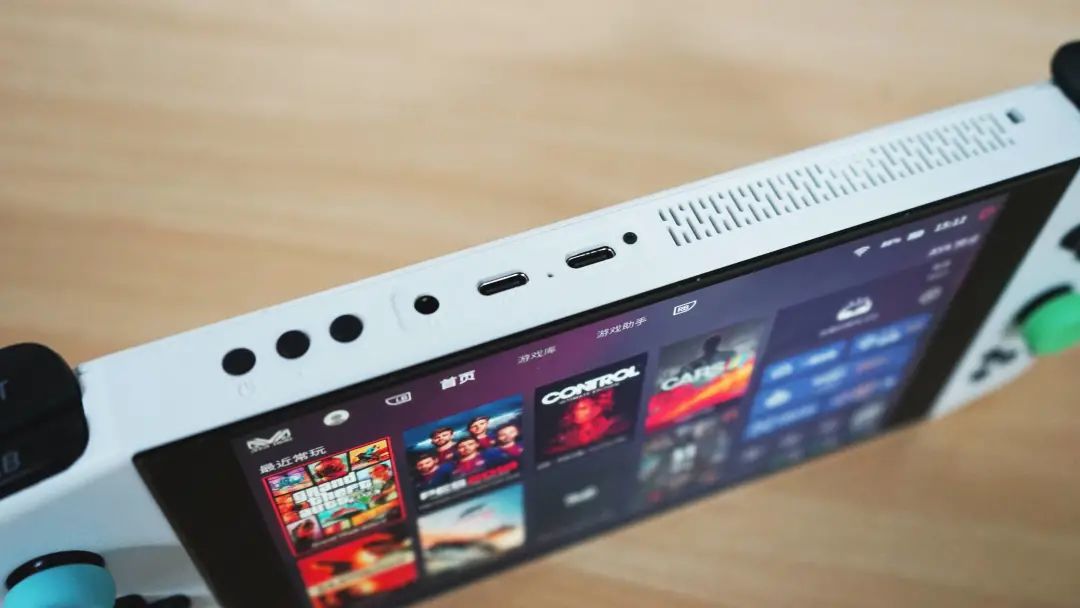 Since it is a Windows handheld, it is natural to look at the interface configuration. The top of the machine is the power button, volume addition and subtraction, headphone jack, two USB Type-C ports, and air outlet; the bottom of the fuselage is a full-featured USB Type-C interface and air inlet, the whole machine is not equipped with a USB-A interface, And there is no TF/SD card slot, which is a pity. 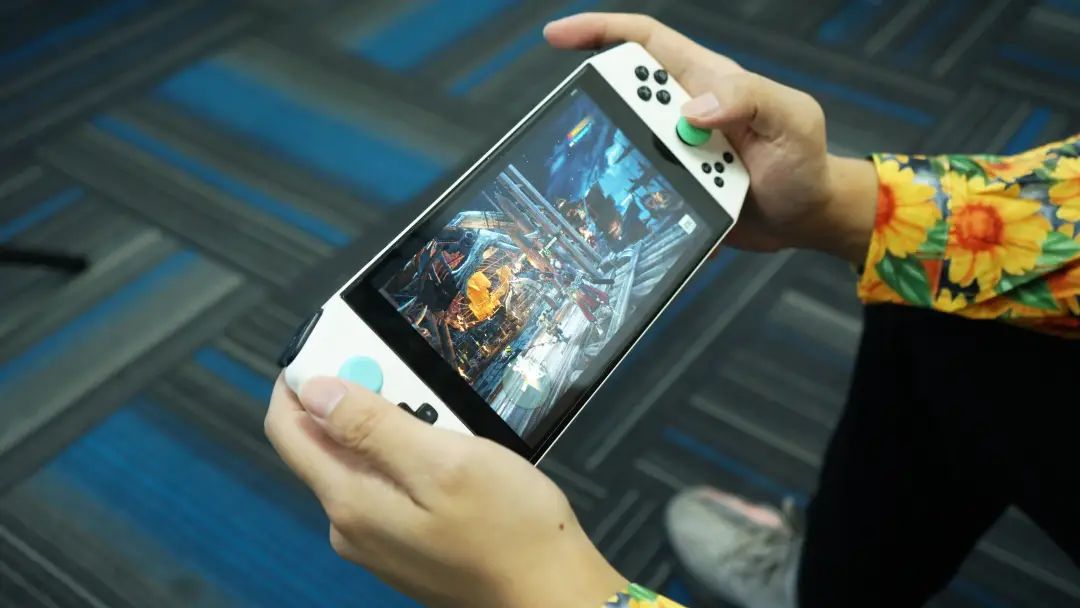 As mentioned earlier, this is a rare Windows handheld, so the game experience is naturally the most concerned element of users. Let’s take a look at the configuration first. AYANEO 2021 Pro is equipped with R7-4800U, equipped with a Radeon Vega 8-core display, 16GB RAM with 4266Mhz + 1TB NVMe SSD, which is basically the core configuration of a mid-range thin and light notebook. From the configuration point of view, running large 3A games will inevitably be more difficult. 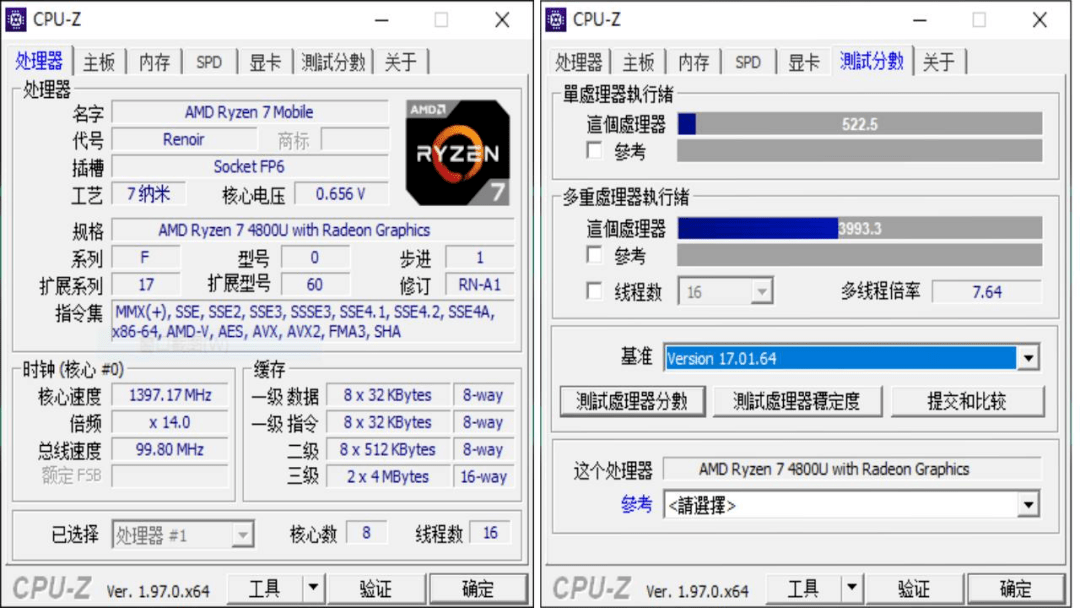 Let’s run the common performance test software first. In the CPU-Z test, the R7-4800U has a single-core score of 522 points and a multi-core score of 3933 points. 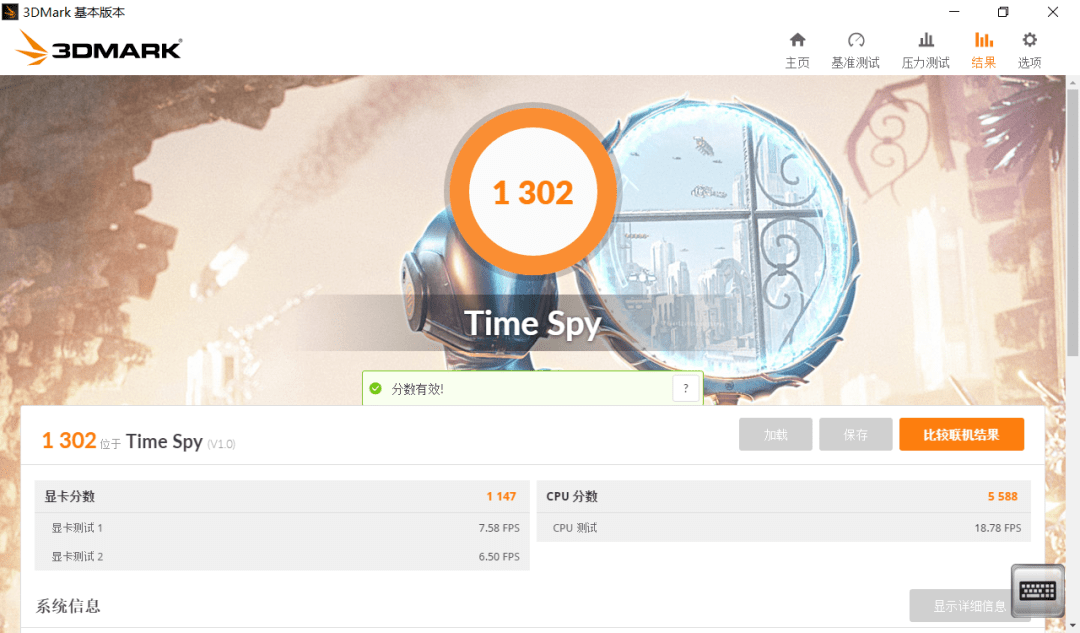 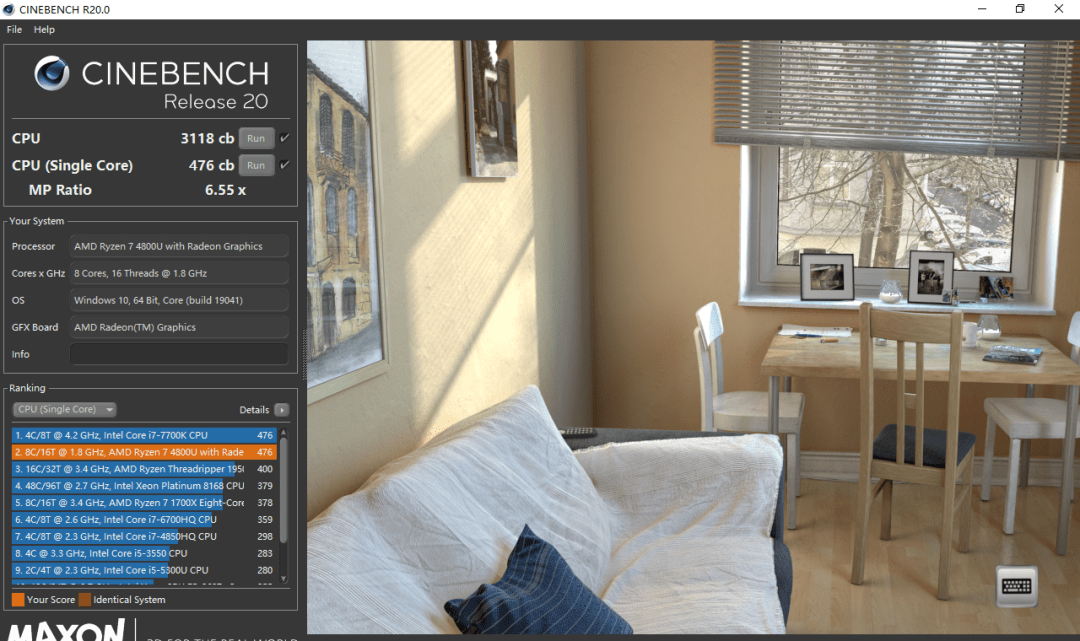 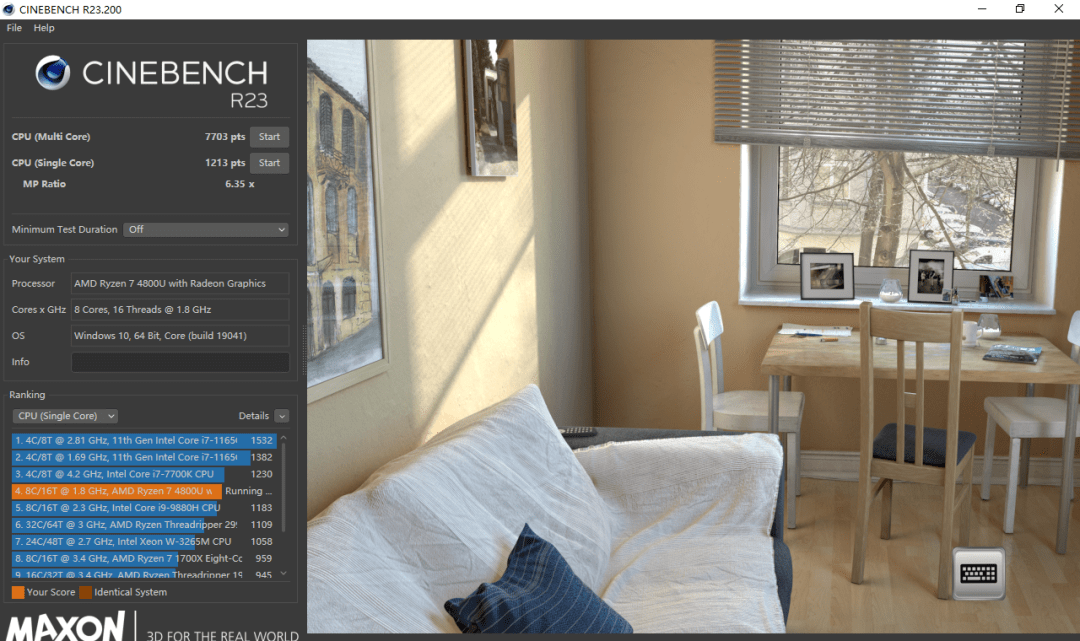 In Conclusion, as a mainstream processor with a mid-range, thin and light notebook, the performance of the R7-4800U is still very good. From the data point of view, this R7-4800U only has a single-core performance slightly inferior to the i5-1135G7, and the multi-core performance is indeed much better than the four-core eight-thread Intel low-voltage processor.

From the 3DMark running points, we can also see that the performance of the Radeon Vega 8-core display is indeed lower than that of the Intel Iris Xe core display.

Next, it is time for the much-anticipated game test. In order to simulate the daily use of players, we selected the best performance in the power options, set the product to game mode (20W) + hurricane cooling, and tested it without plugging in.

In the game “Monster Hunter: World”, we set the game quality to “full low” and use the default 800P resolution for the game. The number of game frames will be between 40-60 frames. fluctuation. 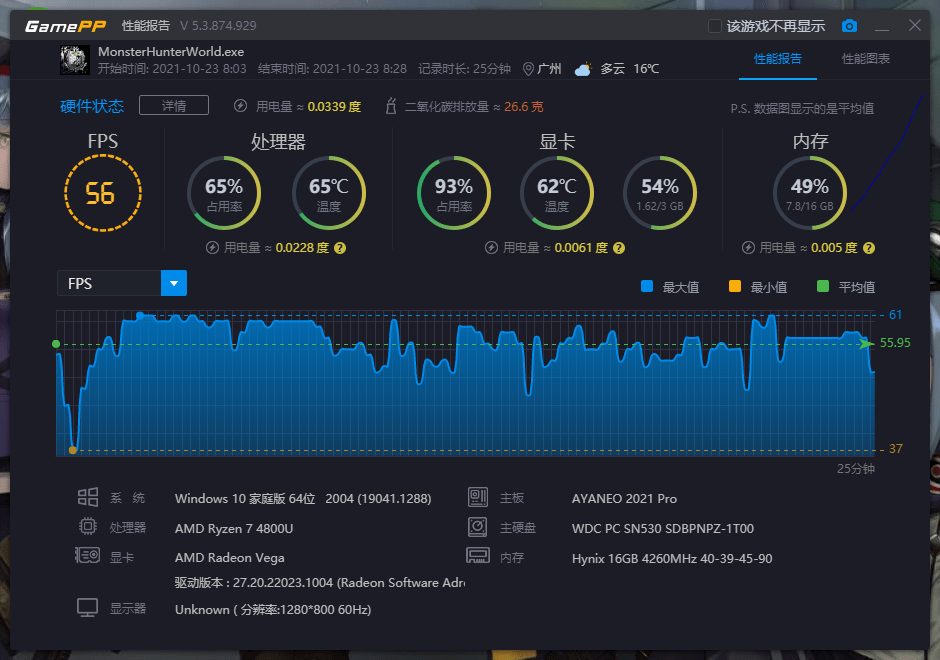 In cutscenes and entering a new map, the number of frames will be relatively low. During normal combat, it can basically stabilize at 60 frames, with an average frame number of 56 frames. This performance is already very good. 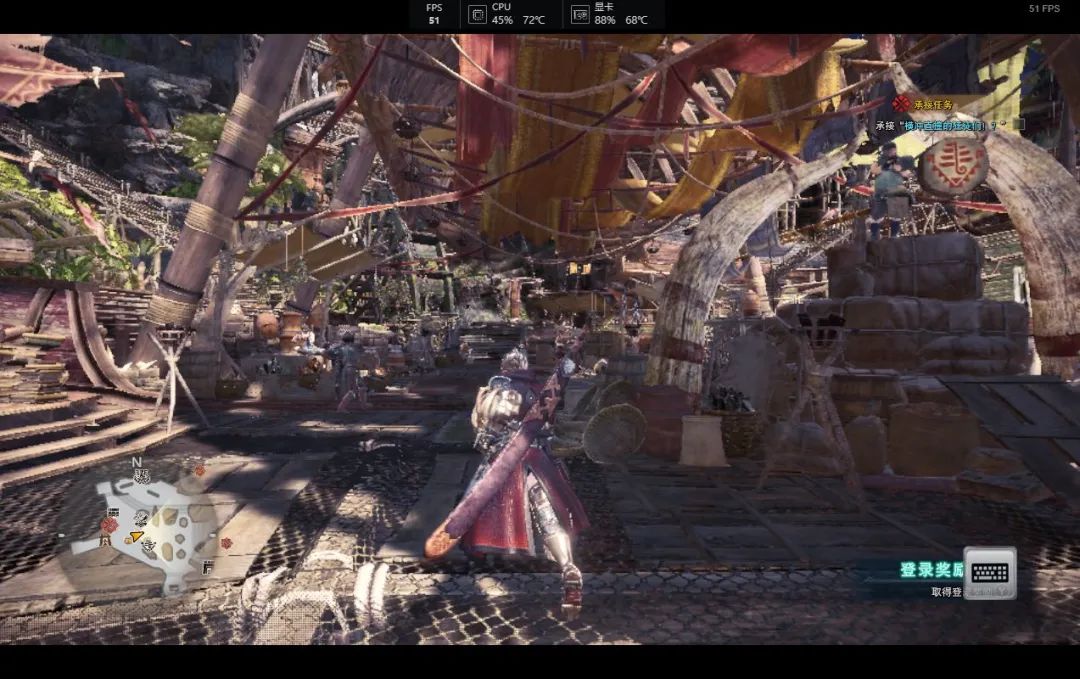 It is worth mentioning that due to DX11 compatibility issues, the game “Monster Hunter: World” has obvious aliasing problems in low-quality situations. Although tuning to DX12 can fix this problem, the number of game frames will be reduced. In addition, because the 16:10 aspect ratio is not supported, black bars will appear at the edge of the screen during play, and the play experience is relatively ordinary. 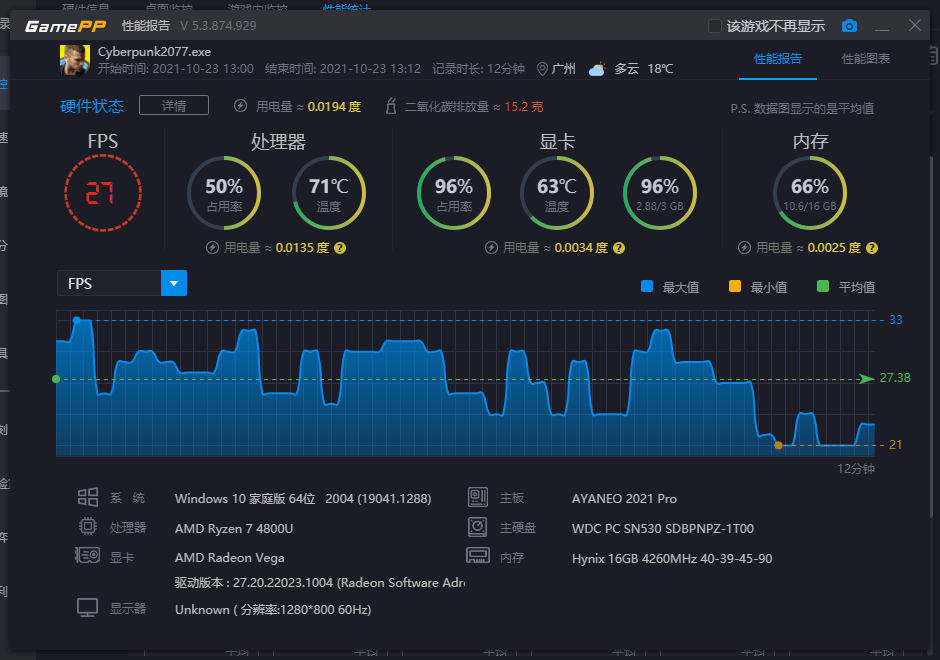 followed by Cyberpunk 2077, which was on fire some time ago. At the lowest image quality, AYANEO will basically maintain a frame rate of about 25 frames, and it can reach up to 40 frames on an empty map from a homeless background. However, when entering the city of dreams and fighting, the frame rate will begin to collapse, and there will even be obvious freezes. The game experience is basically the same as “Zelda Warriors 2” running in handheld mode on NS Lite, and it is difficult to play smoothly. 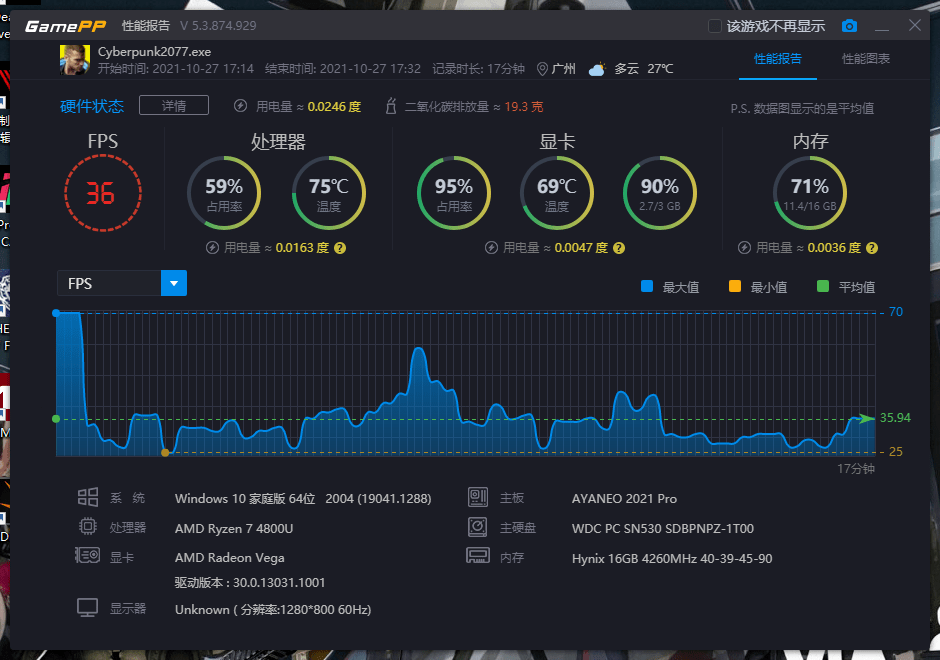 Next, we will adjust the “rendering resolution” in the screen settings to 70%, and test it again. Now, AYANEO can basically maintain a frame rate of about 30 frames, even up to 45 frames when indoor activities. Because the screen is too small, the texture details of the game are not obvious on AYANEO. Appropriately reducing the texture resolution can indeed improve the game experience. 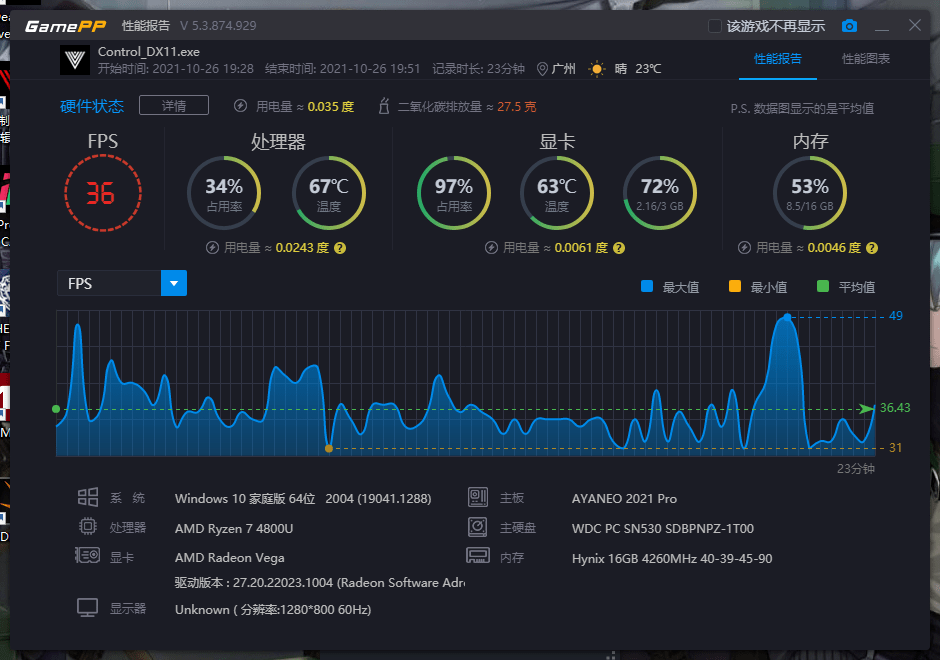 A mainstream 3A masterpiece launched in recent years. “Control” still has high-performance requirements for the product. After actual testing, AYANEO can run this game stably at about 30 frames in low image quality, basically, There will be no obvious feeling of lag, the character movement, design, and release skills are all smooth, and because “Control” itself optimizes the handle operation quite well, the overall game experience is very comfortable.

Finally, the “Forza Motorsport: Horizon” series, which is known for its optimization. With high image quality turned on, this game can run stably at more than 50 frames, the game screen is bright and clear, the operation is a follow-up, and the experience is quite good. Of course, this is also because the screen resolution of this product itself is only 800P, which has a relatively low load on performance and also helps fluency. 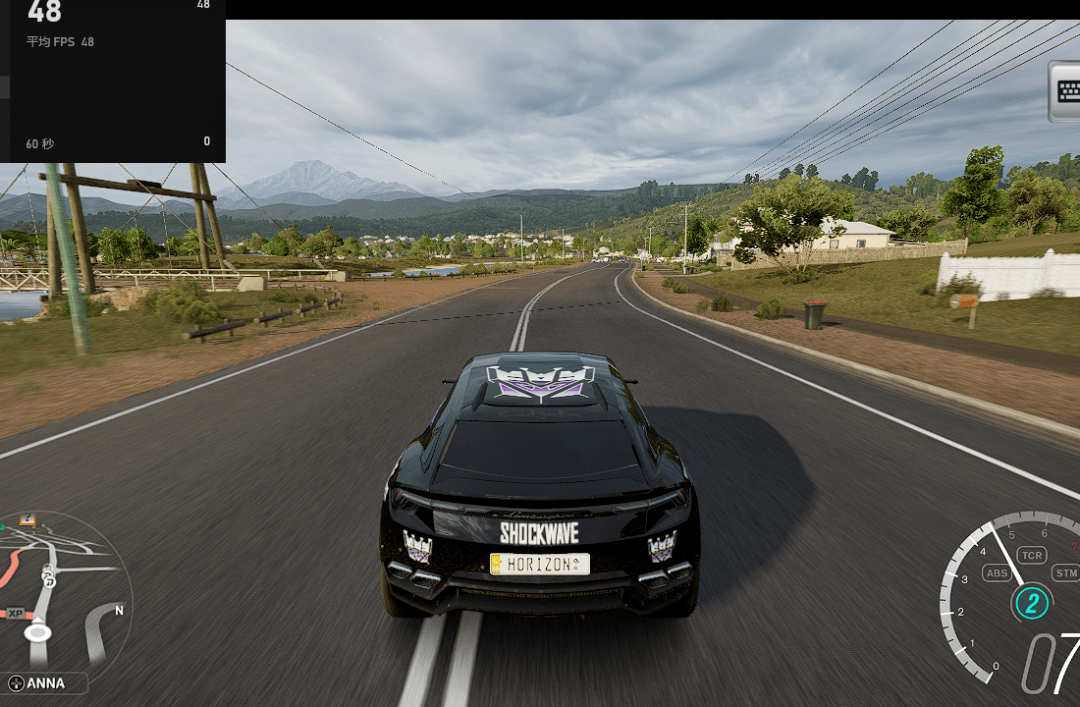 In terms of feel, AYANEO 2021 Pro adopts the common Xbox button layout for PC users. The keystrokes are normal and the feedback is still crisp and neat; the joystick feels good and the operation is sensitive. After putting on the joystick cap, the problem of low joystick height can be improved. 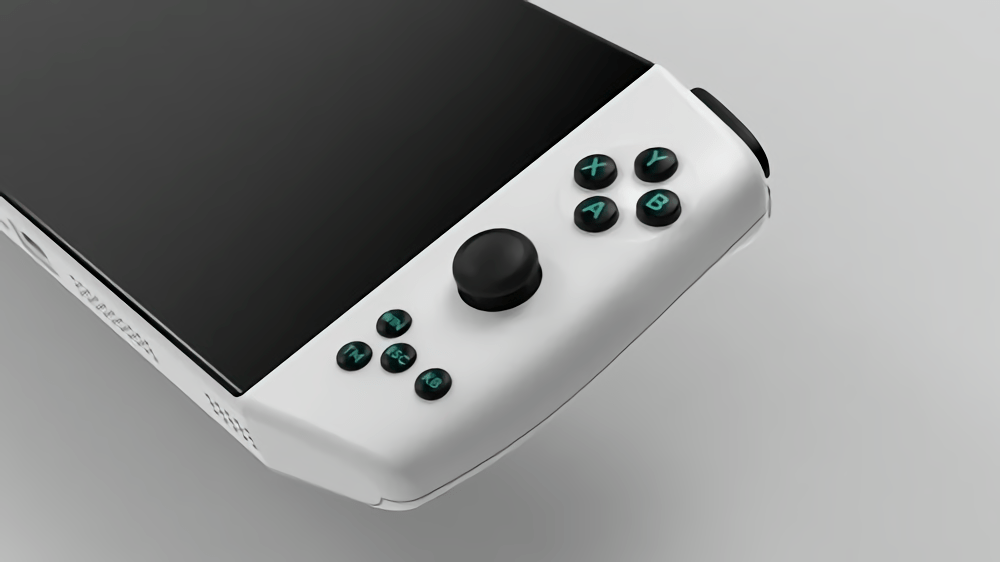 However, this machine has some shortcomings. For example, the shoulder keys are soft, the linear trigger key has a short stroke, and the feel is strange; although the linear motor is used, the shock is still relatively stretched. In general, it is the operating feel that a normal handheld should have, and there is still a big gap when compared to a gamepad.

In terms of heat dissipation, playing “Cyberpunk 2077” for more than 20 minutes can make the body temperature reach the highest. According to actual measurement, the position on the back near the air outlet exceeds 49°C, and the highest temperature of the front touch screen is close to 46°C. Thanks to the reasonable design of the fuselage, the holding part with both hands is basically around 35°C, even slightly lower than the body temperature. There is basically no hot feeling when playing, and the fan is quiet enough, as long as the air inlet is not blocked, there is no problem.

As an atypical PC player, Xiao Lei has used at least six Windows portable devices before this. There are tablets and handhelds, but their slots are surprisingly consistent: that is, it is very inconvenient to operate without a keyboard and mouse. 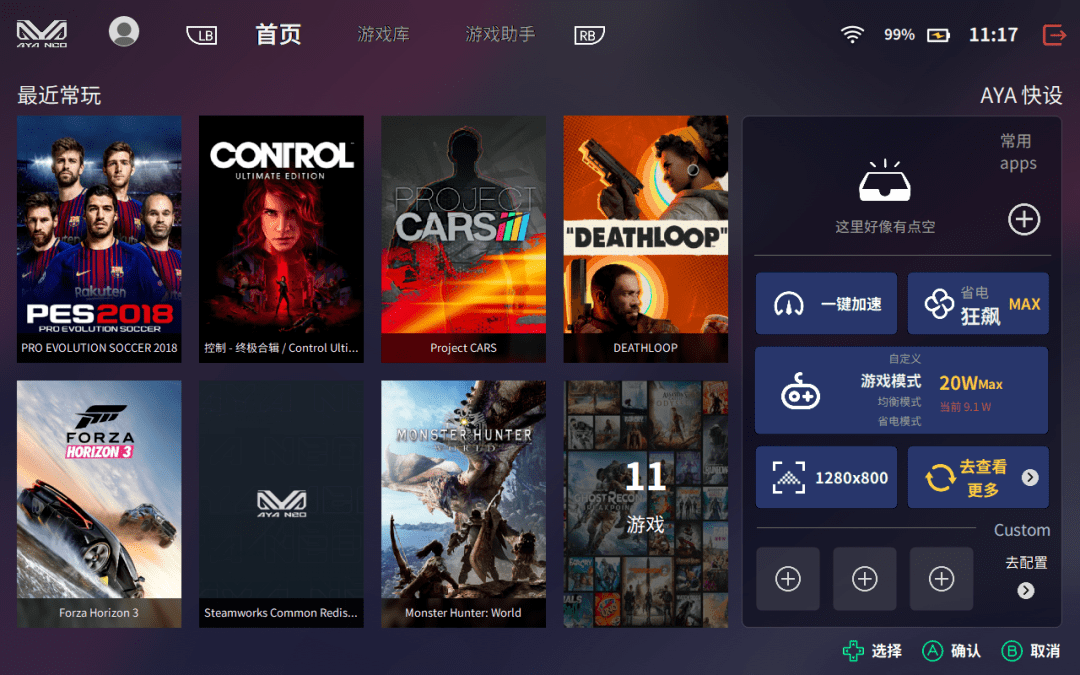 To cope with this problem, AYANEO has created a game platform that simplifies basic operations for users-AYA Space. On the left side of the main interface of AYA Space, the “Recently Played” module can display 7 games that have been played recently, and users can quickly select the games they are playing. On the right side of the main interface, there is the “AYA Quick Setup” module, which is convenient for users to set the operating status and experience of the device.

Toggle the “RB button” to enter the game library interface of AYA Space. AYA Space will automatically retrieve games on the Steam and Xbox platforms. Users can also add games from the local disk to the game library through the “Add Game” function, which is convenient for users to manage. 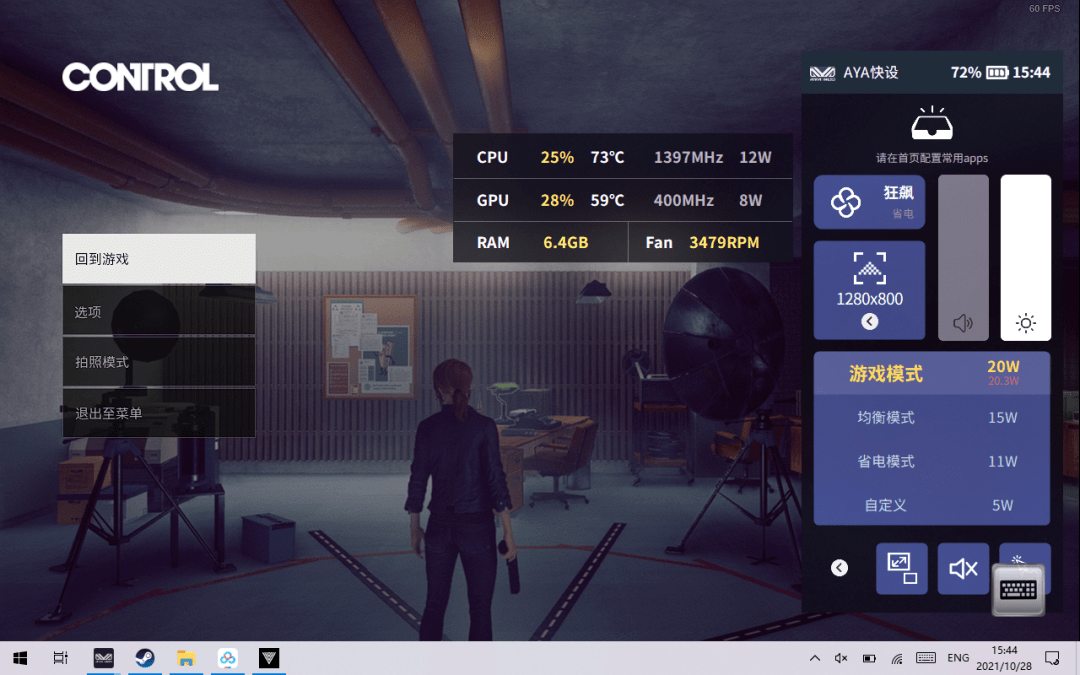 When the user enters the game, click the “KB” button to call up the “Quick Setup Interactive” window. The AYANEO parameters can also be adjusted very quickly in the game, and even in scenarios that require keyboard input, you can quickly pass AYA Quickly Set up the touch keyboard to call out.

However, as far as the current experience is concerned, AYA Space still has shortcomings. First of all, users in AYA Space will encounter situations where they cannot perform touch-screen operations and can only operate by pressing buttons. This operation method is counter-intuitive and violates the original intention of the AYA Space application.

Secondly, because AYANEO is not equipped with a keyboard, it becomes very troublesome for users to enter a username during the game. Of course, you can cut out the virtual keyboard for input through the “Quick Setup Interactive” window of AYA Space, but Xiaolei has also encountered the situation where the virtual keyboard cannot enter the user name normally and the game cannot be played during the experience. It needs to be improved.

Disadvantages: 1. The size of the body is too heavy; 2. The battery life of the product needs to be improved; 3. Without a physical keyboard, it is difficult to obtain a good operating experience in the Windows system. 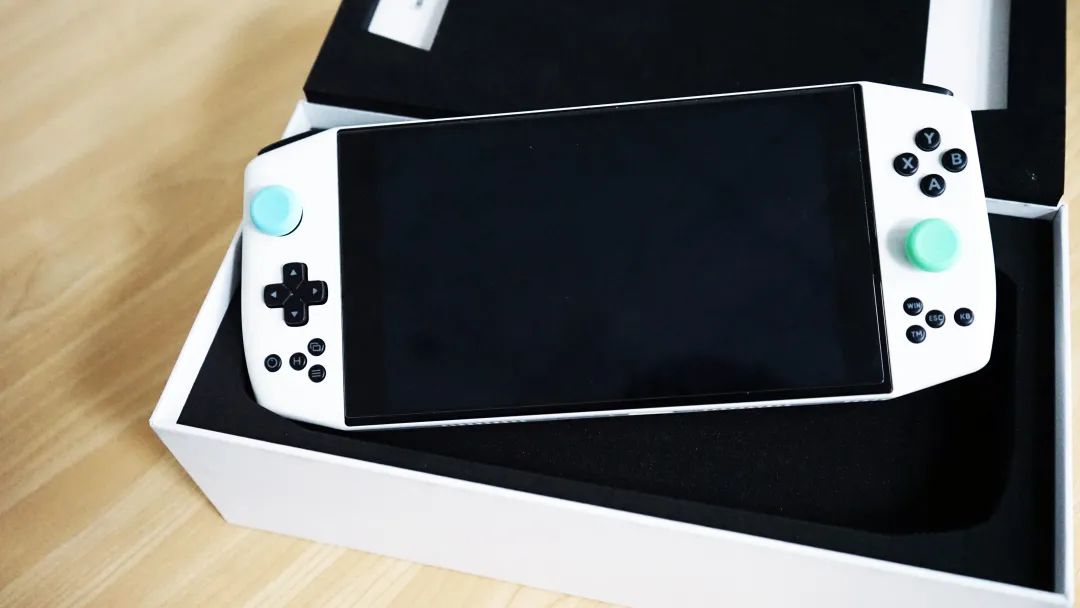 As a brand new Windows portable device, AYANEO still needs to be polished. For example, with the standard 47Wh battery, playing “Cyberpunk 2077” with full performance will basically last less than an hour and a half, which is completely inadequate from the judgment criteria of the handheld. For example, with heavy body weight, users will inevitably feel a little tired if they use it for a long time. Only by leaning on the table or lying on the bed can they feel more comfortable.

During the test, I took AYANEO 2021 Pro with me and played games for a week. Whenever I come home from getting off work, my whole person is limp on the sofa or lying on the bed, I can lie down and play at home comfortably. Regardless of all aspects of the problem, from the point of view of a handheld, this product can indeed meet my needs. Xiao Lei believes that if you are an experienced gamer with a serious game console and high-performance computer, and are not satisfied with the weak performance of the Switch, you want to play Windows games anytime, anywhere. Then using AYANEO allows you to spare a little time before traveling, commuting, and going to bed to continue playing the games in your own Steam game library, and even make it possible to play some 3A masterpieces on the handheld.

But if you do not meet the above conditions, you are just a player who is choosing your first game console, or even your first computer. Then I can tell you responsibly, buying a serious game console, or buying an office/gaming computer according to your own budget, I believe it will give you better games and even office work. Experience. Fortunately, this most powerful Handheld Console is currently available on Banggood at a discounted rate of $1379.99.