Realme releases 10.4 inch Android tablet “realme Pad”. It’s not a very high-performance product. But it’s scheduled for a world premiere (sale) just at the timing of the Black Friday sale. And you can buy it for $189, which is the same price as a tablet made by a Shenzhen manufacturer.

The OS is Android 11 based “realme UI for Pad”. Since it is a unique UI for realme tablets, I am very worried about its specifications. In addition, this article will be handled at a shop called Narzo Store in AliExpress. Still, he said, “The global version can support the Chinese and Indian version.”

The CPU is Helio G80. It is a CPU that marks an Antutu score almost the same as the UNISOC T618 installed in the ALLDOCUBE iPlay 40 series and Teclast T40 Plus, which are often introduced on Xiaomi Today. So it’s not as good as the Xiaomi Pad 5.

RAM is set to 3GB / 4GB, and storage is set to 32GB / 64GB, but I think that “4GB / 64GB” will probably be the choice for Japanese users. However, the capacity is still smaller than ALL DOCUBE and Teclast products. This capacity will be a little tough for games.

The display is 10.4 inches, and the resolution is 2,000 x 1,200, which is the same specifications as the ALLDUCUBE iPlay 40 series and Teclast T40 Plus. I don’t think there is any problem with this spec, but what is worrisome is the level of Widevine. I inquired, but the current situation is unknown. I’m expecting “Because it’s realme, is it L1?”

Regarding communication, this product has a Wi-Fi model and an LTE model. However, the Narzo Store handles only Wi-Fi models.

In addition, the camera has a slightly different configuration of in 8MP / out 8MP (as a tablet product, the number of pixels of the in-camera is high, and the number of pixels of the out camera is about normal), and it feels like “in-camera emphasis”. I don’t think many people buy tablets for photography, so it’s not a bad idea to prioritize in-camera quality by emphasizing web meetings and video chat. 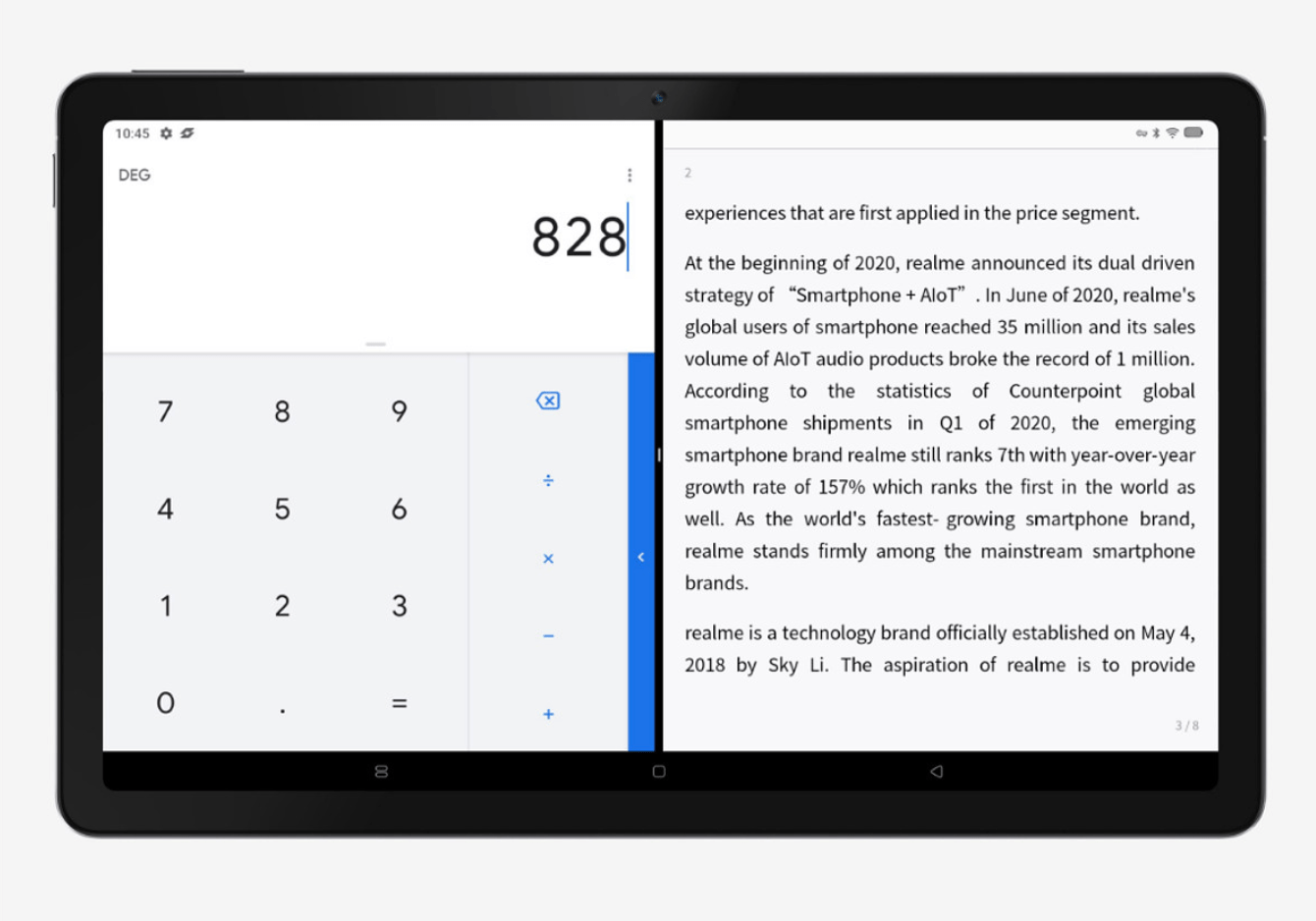 Let’s compare the size with ALLDOCUBE iPlay 40 and Teclast T40 Plus of the same display size.

Whether it’s the iPlay 40 or the T40 Plus, I think it’s compact and lightweight enough to give a passing score for a Chinese Android tablet. The realme Pads are even thinner and lighter than those, so it’s a great size.

On the front, I think the bezel width is relatively narrow for an Android tablet. Also, the webcam is on the top bezel when you hold it sideways.

I’m sorry, I didn’t have an image that clearly shows the back. The housing material is made of CNC machined metal, and the edge part has a square shape, which is said to be the latest fashion. This is an impression close to Xiaomi Pad 5.

The thinness of 6.9 mm is also attractive for a tablet of this class. It’s about a good match with Xiaomi Pad 5 (thickness 6.85 mm).

The Realme Pad has lower specs and a much lower price than the Xiaomi Pad 5, so it doesn’t feel like direct competition. I think that it is a little insufficient for gameplay, but since the housing quality of realme (or OPPO system) can be expected for speaker performance, it is very useful for watching videos and as a handy information terminal. I think it is an attractive product.