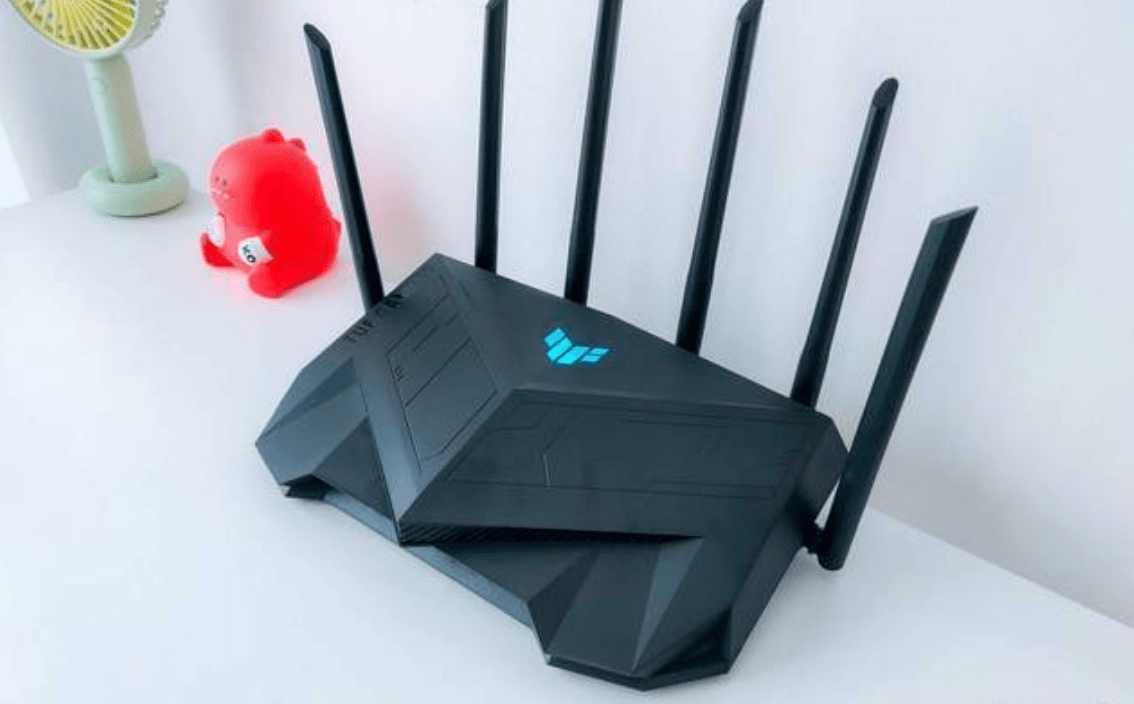 So, what are the upgrades of “ASUS TUF GAMING AX5400”? According to the information and experience, the upgrade points are mainly concentrated in three aspects:

1. The appearance is upgraded again, and the style is more robust. The AURA RGB magic light synchronization lighting effect is transferred to the routing product within 1,000 yuan;

2. The number of antennas has been increased from 4 to 6, which means that the antennas for 2.4G band signals are completely independent;

How is the experience? To find out the specific performance of “ASUS TUF GAMING AX5400”, I recently started one. I hope that the following content will be helpful for you to purchase products.

TUF-AX5400 belongs to the ASUS TUF Special Forces game routing product line. The packaging continues the traditional ASUS style. The color is ASUS family-style taupe, and the three-dimensional size is 35.2*34.1*9cm. The center of the front is the rendering of the product, and the surface has been treated with UV highlighting; the lower-left corner is the product name and the introduction of features. 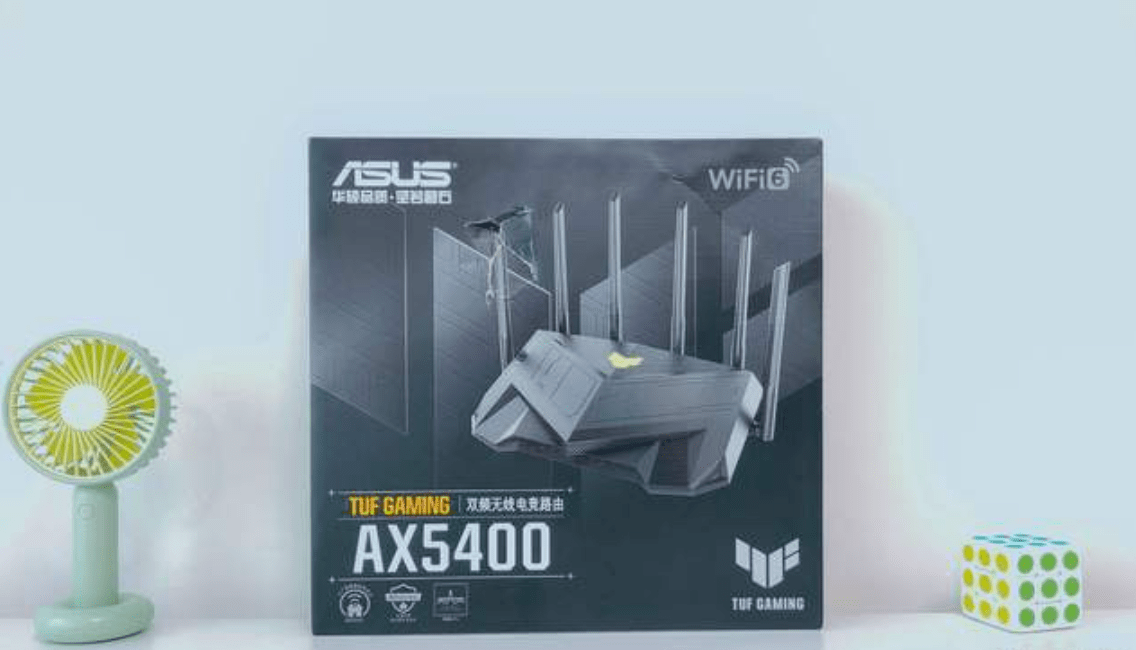 On the back, there is a brief introduction to the four major features of “ASUS TUF GAMING AX5400”: brand new WiFi6 technology, port forwarding, identification of high-quality game nodes, mobile e-sports, seamless roaming, and game acceleration. Wired and wireless can be battled.

In addition to the main body of the router in the package, there are a series of paper manuals, a Category 5 shielded network cable with a length of about 1.5m, and a power adapter. 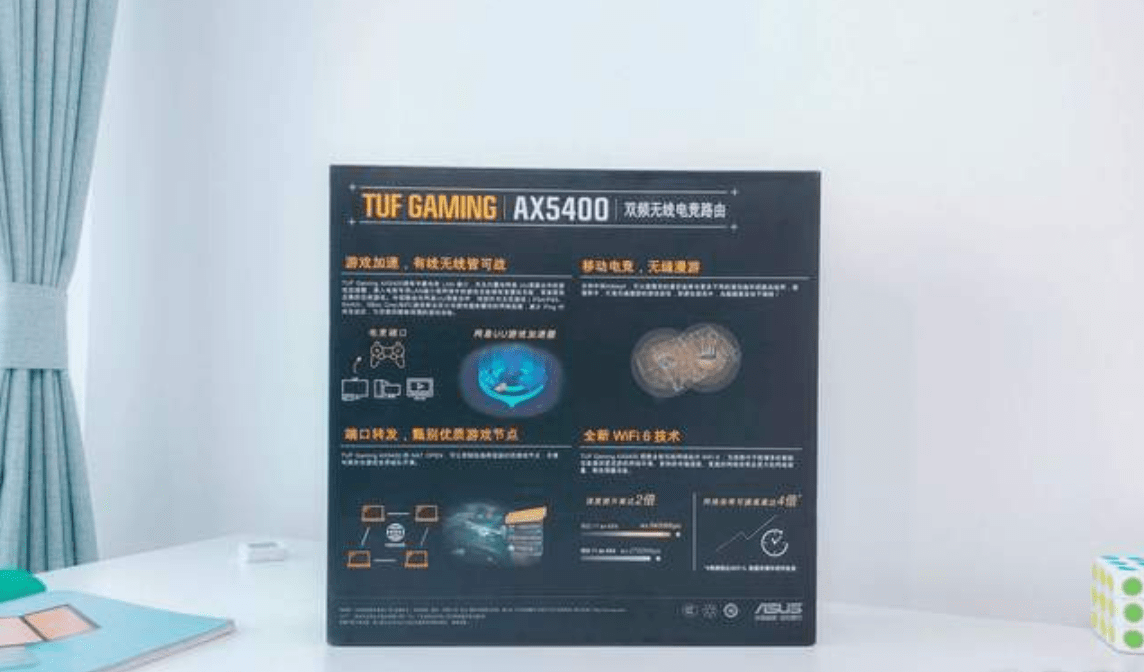 The power adapter of “ASUS TUF GAMING AX5400” is relatively traditional, using ASUS classic power adapter, and the output standard is 12/2.5A.

“ASUS AX5400 Router” adopts a pure black design, and the surface of the fuselage highlights the characteristics of “special forces” through challenging shapes and irregular textures. It should be sweet and delicious among game enthusiasts. 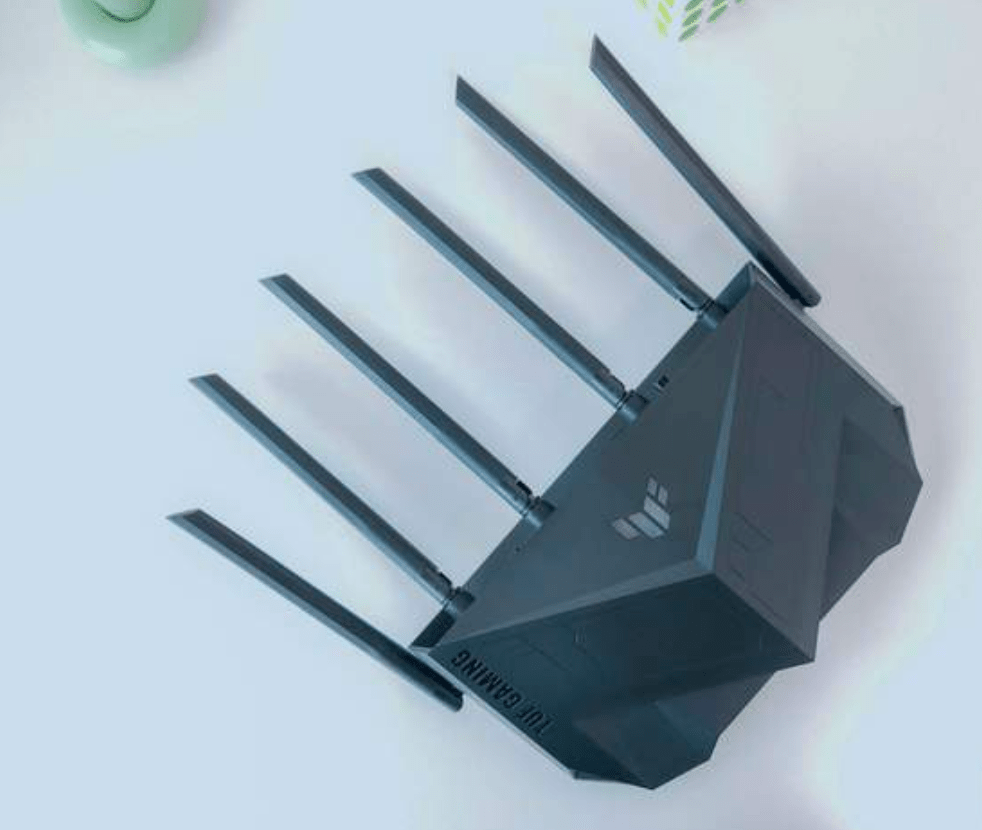 The front face adopts a supercar shape, and a series of LED indicators are hidden in the groove of the front face. They are entirely hidden before being lit and are faintly visible after being energized and lit. Is this a hint of the humility of an “e-sports agent”? 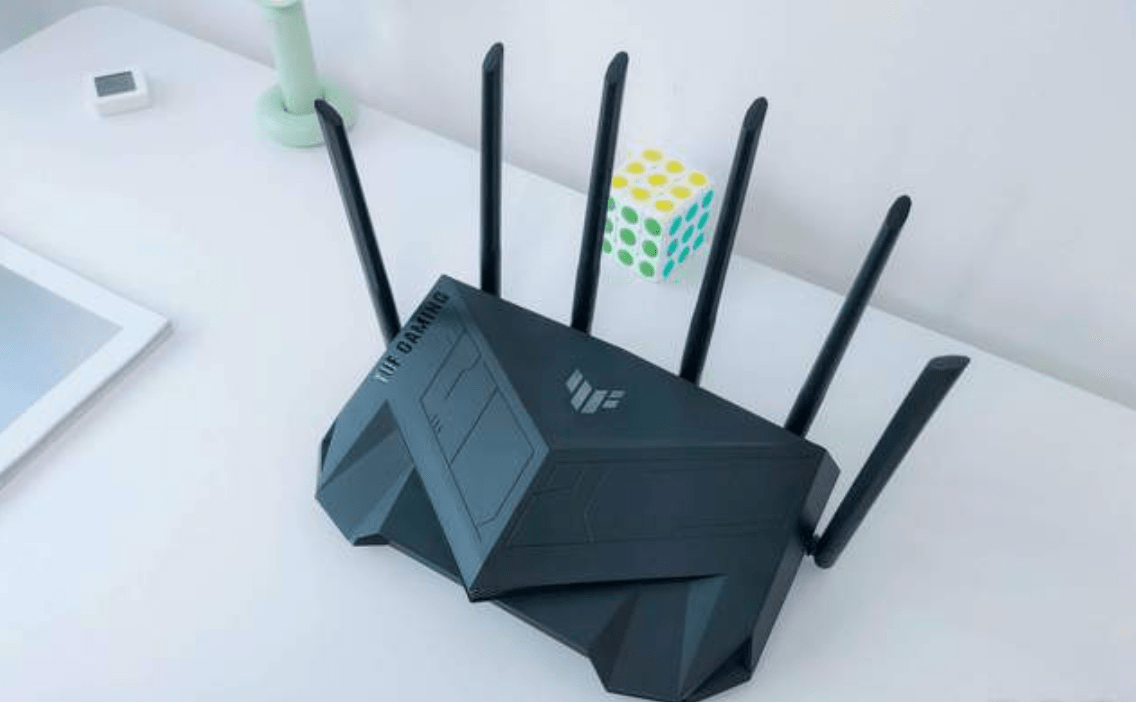 At the center of the top of the front of the TUF-AX5400, you can see the logo of the new TUF Gaming Agent series. The logo is similar to the metal texture before it is lit. After power on, it supports AURA RGB Divine Light Synchronization. The lighting effects can also be customized in the background.

The antenna uses six non-detachable external antennas, one on each side and four on the back. The two extra antennas give 2.4G frequency band signals.

All ports of TUF-AX5400 are laid out on the back of the fuselage. From left to right are the DC power port, physical power switch, USB 3.0 port, 4 Gigabit LAN ports (LAN1 port is the port that supports game acceleration), one thousand Mega WAN port, and reset button. 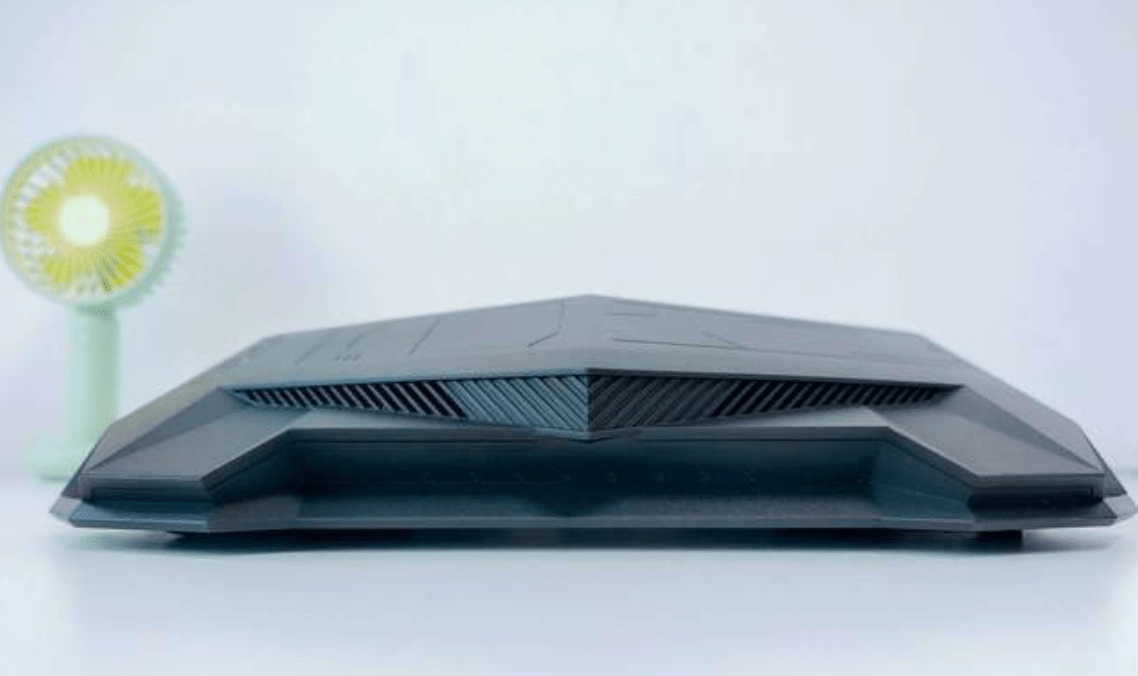 There are four larger rubber anti-skid pads and a large-area heat dissipation grill on the back of the fuselage. The anti-skid rubber pads can effectively raise the fuselage and facilitate the formation of air ducts. 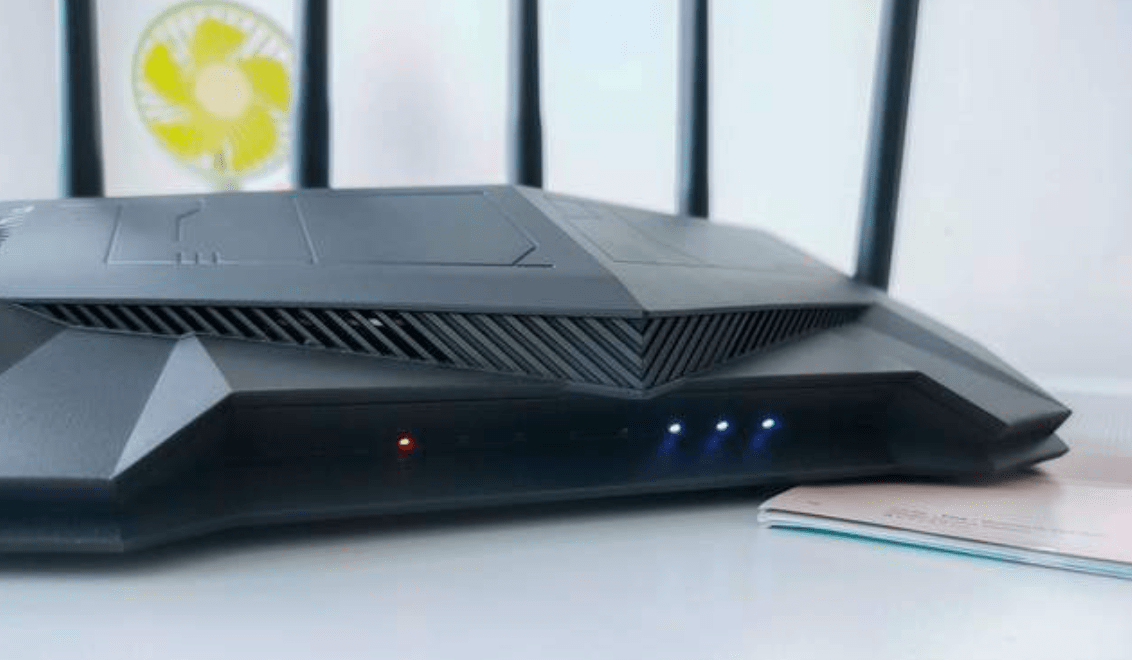 Put, this Broadcom BCM6750 1.5Ghz processor, Broadcom Wi-Fi 6 platform also has a WLAN chip. But it supports up to 80MHz.

As a member of ASUS router, “ASUS AX5400 Router” is naturally equipped with the Merlin graphical operation interface that high-end router players are familiar with. Still, ASUS has customized the entire UI for the TUF GAMING series, which looks more combative. 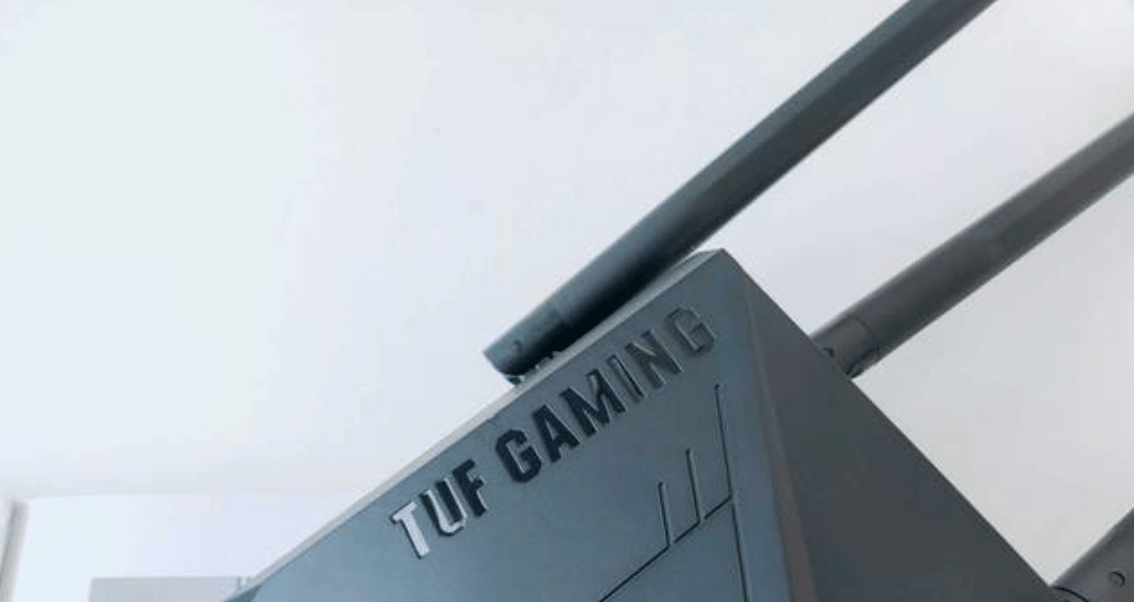 You can easily set the lighting effects on the first screen, with multiple modes such as constant light, breathing, wave light, and rainbow light.

Friends who have used ASUS routing said that the web page’s background is quite familiar, so I won’t repeat them here because you really need to write a separate 4D experience to make it clear. 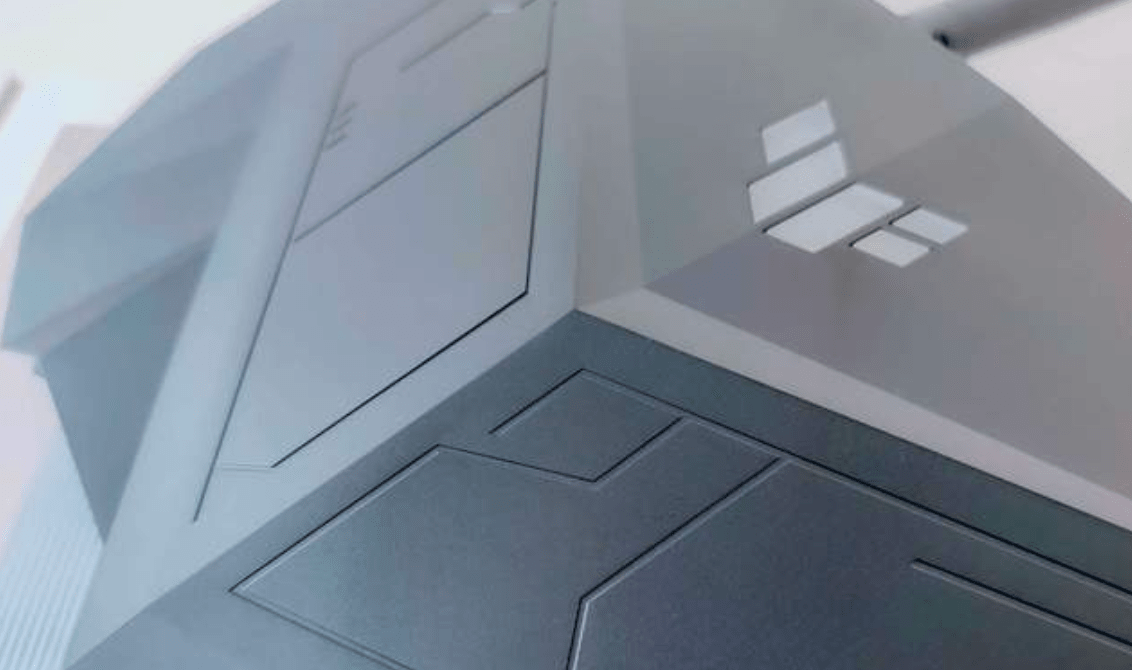 In terms of security, “ASUS TUF GAMING AX5400” already supports WPA3. Although the WPA3 security protocol has been out for a long time, many routers in the market are basically still in WPA2. This point should be praised for “ASUS TUF GAMING AX5400”. Because without these big routing brands in front, no other brands will follow up. 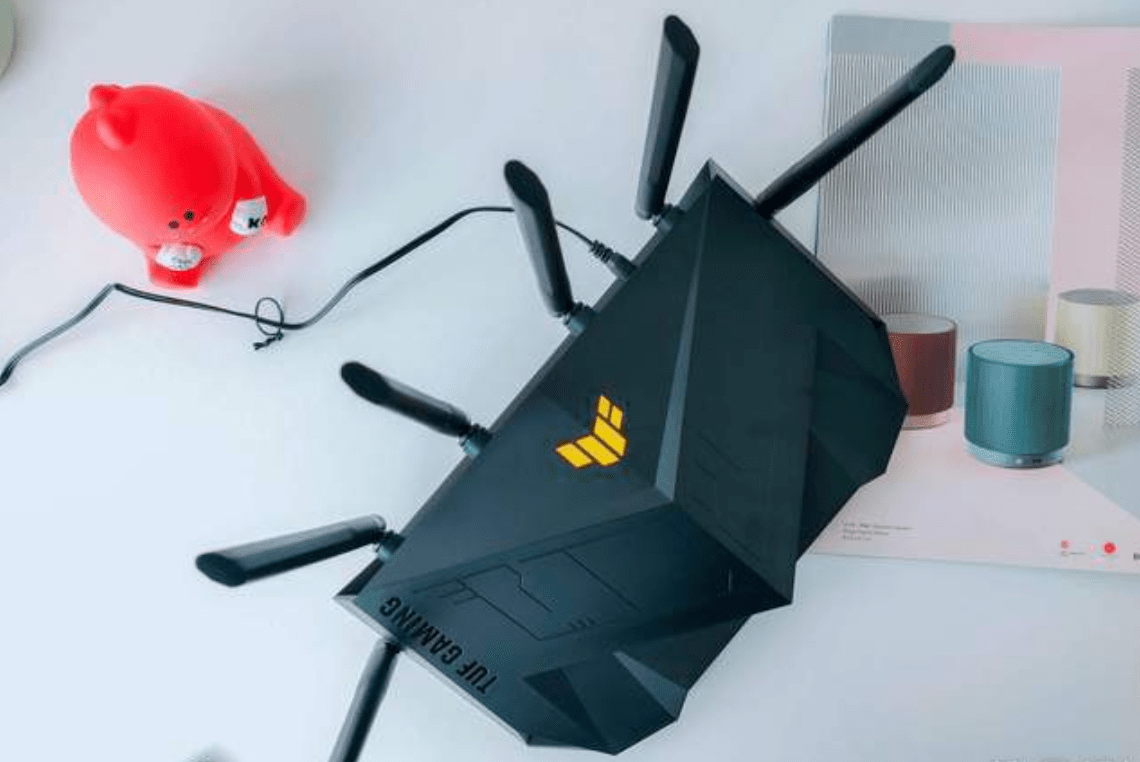 Through real-time network monitoring, you can detect these threats before malicious programs, viruses, and another malicious intrusion into your computer and connected devices. The parent computer control program allows you to schedule the time for connected devices to access the Internet, and you can also prohibit unnecessary websites or apps (such as games & videos). Save yourself from going to various security settings.

As an e-sports router, game acceleration will naturally not be absent. First, NetEase’s UU accelerator is supported, and a 40-day trial period will be given to purchasing the machine. Additional fees will require for continued use.

In addition to the NetEase UU accelerator, ASUS router firmware has always built a game acceleration engine to support game acceleration for mobile games and PC and home game consoles. At the same time, it is also comes with an Open NAT forwarding mechanism. It can easily create online game port forwarding rules. And optimize the routing packets from the game console to the router. 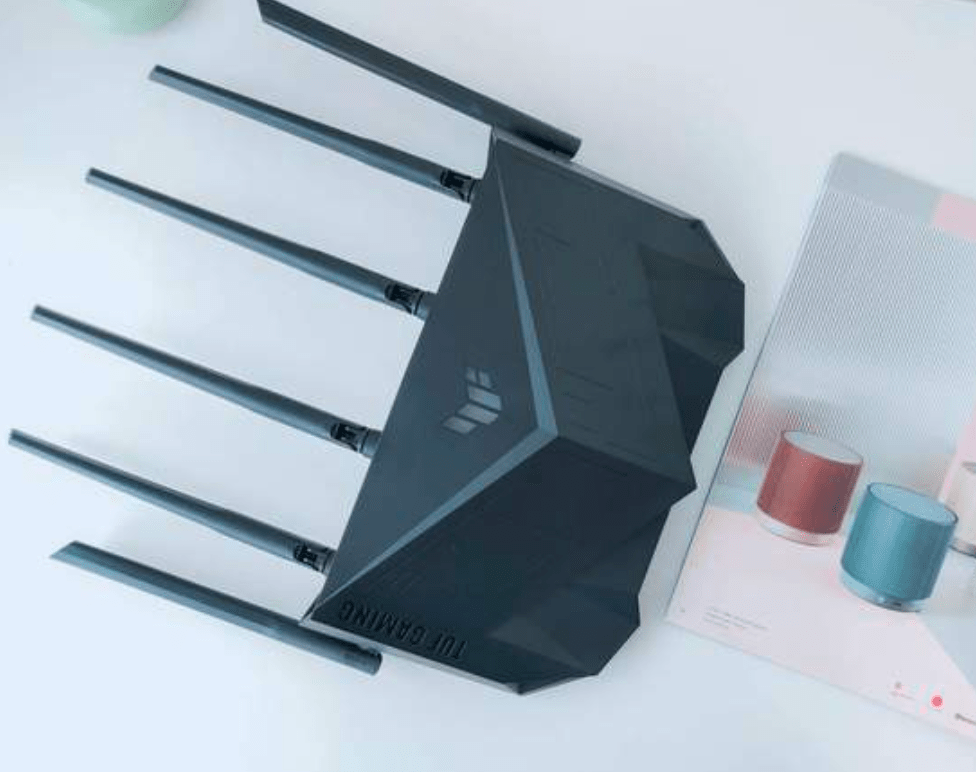 “ASUS TUF GAMING AX5400” comes with a USB 3.0 interface so that you can connect it to an external hard drive as a backup server or simple NAS. You will not need to repeat this step again.

In terms of networking, “ASUS TUF GAMING AX5400” supports ASUS AiMesh 2.0, which is smart mesh networking. You can network it through different models of routing to achieve network coverage for large units. But today, we will not do network testing here. Friends who have used the ASUS routing web page settings should know that the setting items inside should be the most comprehensive and the most complicated of all routing brands. 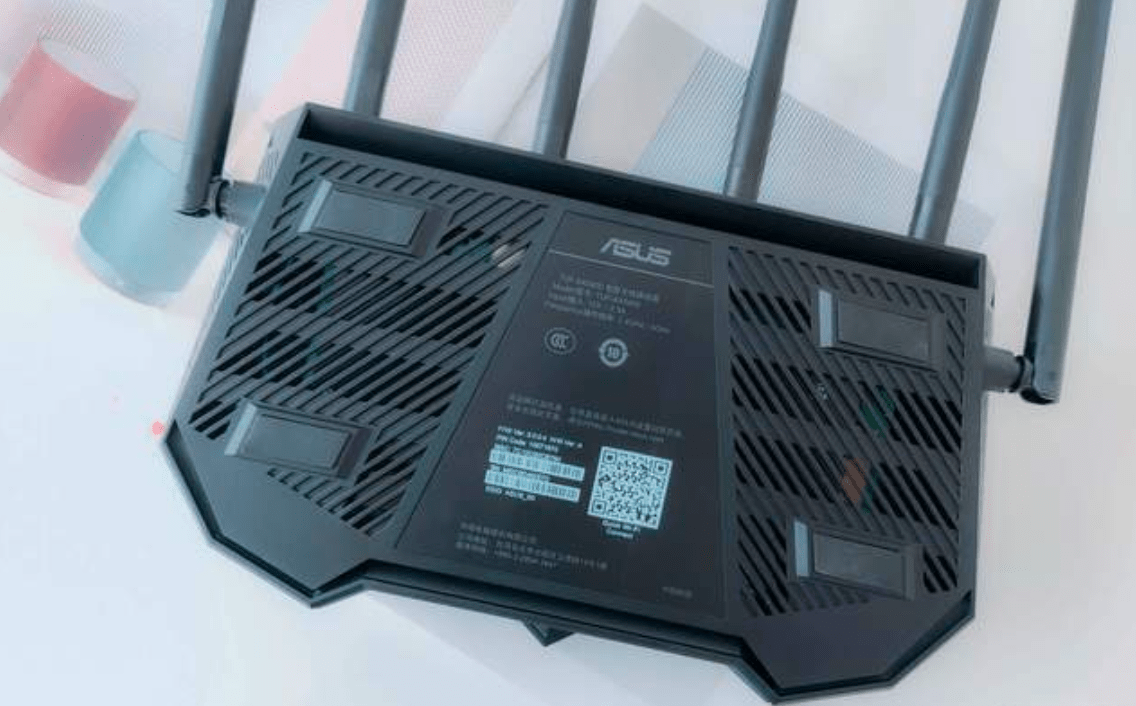 If the network is configure through the APP, directly click “+” to add a route. But you need to select the correct route series. The APP interface comes with a sense of science fiction. At the same time, all the information is clear at a glance. You can intuitively see the networking status of the Mesh network, wired backhaul or wireless backhaul, and the connection terminals under each node’s routing details.

As the Chinese people’s demand for home routers increases, major router manufacturers are swarming with built-in antennas and minimalist designs. In such a large environment, “ASUS AX5400 Router” is like a retrograde player. It constantly improves the user experience and providing electricity. More choices for competition enthusiasts.

Returning to the product itself, “ASUS TUF GAMING AX5400” has been quite successful in terms of styling. At least the game fans around me have given praise; combined with the pricing strategy, more small partners can choose to start. In terms of game acceleration, it has a Dual game acceleration engine. So users need to use it freely, chase dramas, play games, and hand over the network to “ASUS TUF GAMING AX5400”.