Silicon Power is a company founded in 2003, it has a wide variety of storage products with exclusive designs that include USB flash drives, memory cards, and solid-state drives (SSD). Its continuous search for new markets has positioned it in more and more regions. With products that are characterized by an excellent price-performance ratio, making it one of the best brands on the market.  Recently the company has launched its UD70 series storage line for M.2 NVMe SSD PCIe 3.0, in the same way, the US70 series for M.2 NVMe SSD but for PCIe 4.0. Today we are pleased to review the Silicon Power UD70 2TB NVMe SSD, which is based on Micron QLC NAND Flash memory.

Available in capacities of 500GB, 1TB, and 2TB and the performance reaches speeds of 3400MB / s in reading and 3000MB / s in writing for the version of 2TB. Supports SLC caching and DRAM cache buffering to improve sequential read/write and random read / writes performance. Data security is covered with built-in E2E to enhance the integrity of data transfer, adopt 256-bit AES encryption to ensure data security. The UD70 is Silicon Power’s latest high-end M.2 NVMe PCIe Gen3x4 model and we will test the 2TB variant today. The Phison PS5012-E12S controller features a total of eight NAND channels for high performance.

The product packaging is characteristic in cardboard and dark colors with the logo on the upper part and a window that reveals part of the product. Silicon Power presents its UD70 line in style, with a beautiful presentation on its packaging.  You can see a blister inside the cardboard box and through the window, you can see the storage unit. Clearly, the packaging makes it clear the PCIe Gen 3 × 4 M.2 specifications in size or presentation 2280, that is, 22 mm wide by 80 mm long. Supports NVMe 1.3 the highest for Gen 3.0. The capacity of this product is 2TB and is warranted for 5 years.

More specifications on the back of the packaging, a QR code is detailed to activate the warranty. Contact information for support, address and email, and phone number are appreciated to request any support that is required.

The unit is presented internally in a transparent rigid plastic blister, without any other accessory to accompany it. The blister protects the unit from bumps and falls during transport. The presentation of this unit looks pretty good. The unit is visible, a dark label with the part number of the product and specific model UD70 2TB series. The product label matches the presentation of the packaging. NVMe 3D NAND in M.2 PCIe Gen 3 format making it clear that it is a drive that achieves high read and writes speeds.

The unit is in M.2 format, with dimensions of 22mm x 80mm x 3.5mm and a weight of 8 grams. Memory modules are 3D QLC NAND type, with a high memory density per cell, and support for the NVMe 1.3 interface offers high read speeds of up to 3,400MB / s and write speeds of up to 3,000MB / s. The UD70 features an advanced dual cooling system thanks to APST / ASPM power management support. In addition, the thermal throttling function monitors and controls temperature levels, helping to maintain high-performance levels and prevent damage from overheating.

The UD70 has high read / write speeds (sequential and random) thanks to its compatibility with SLC Caching and DRAM Cache Buffer technologies. Also compatible with the RAID engine and equipped with LDPC (Low-Density Parity Check) and E2E protection, the data transfer process is more than guaranteed. In addition, AES 256-bit encryption ensures maximum data protection. The resistance of the unit, according to the manufacturer is 1500G / 0.5ms and its estimated MTBF is 1.8 M hours. The interface is of the PCIe Gen 3 × 4 type and a system with Windows 8.1 / Windows 10 operating systems is required for its operation.

We lifted the label and found 4 96-layer 512GB QLC 3D NAND flash memory packs each made by Micron. A 512GB DDR3L DRAM chip manufactured by Kingston is used for caching. The controller is Phison’s PS5012-E12S, the E12S is one of the best controllers currently on the market. The PCB is dark blue without any chip on the back. Features a clean PCB.

Now it is our turn to make our list of tests to the unit Silicon Power UD70 NVMe SSD in its version of 2TB. For this we are using the following test Setup:

For diagnostics, obtaining information about the current health status (percentage of memory wear), and monitoring SMART-indicators, Silicon Power offers a free utility SP Toolbox available for download on the official website. Unfortunately, this program has no interface russification. The available operations are shown in the screenshot below. They are typical for highly specialized utilities of the corresponding class.

The tests to which we have subjected this SSD are the following: 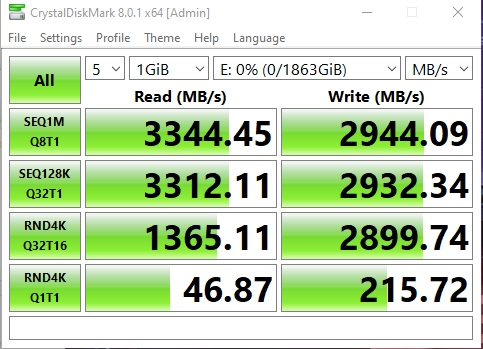 In the current version of CrystalDiskMark 8.0.1 x64 of the CrystalDiskMark benchmark, with the most frequently used test data volume of 1 GiB; the drive demonstrates high read speed, which is close to the limits of the PCIe 3.0 x4 interface. Crystal DiskMark is the software that gives us the best sequential reading and writing results; exceeding what is set by the manufacturer with more than 3344 MB / s and 2944 MB / s. We also see quite good rates in random operations; slightly exceeding the units mentioned before in the last section of Q1T1.

As in the two previous utilities, a small amount of test data in AS SSD Benchmark 2.0.6821.41776 allows you to evaluate the speed of the SSD only within the SLC cache. Therefore, the drive shows a maximum sequential read speed close to 2073 MB / s and a write speed of ~ 2427 MB / s. High performance under such conditions is reflected in the number of I / O operations in IOPS. 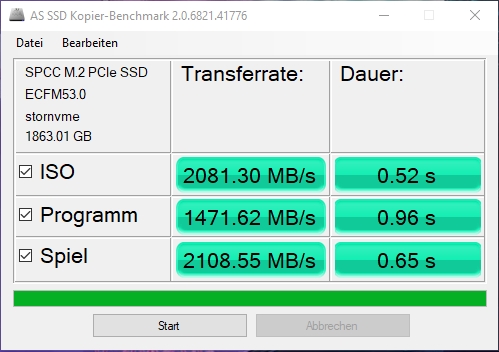 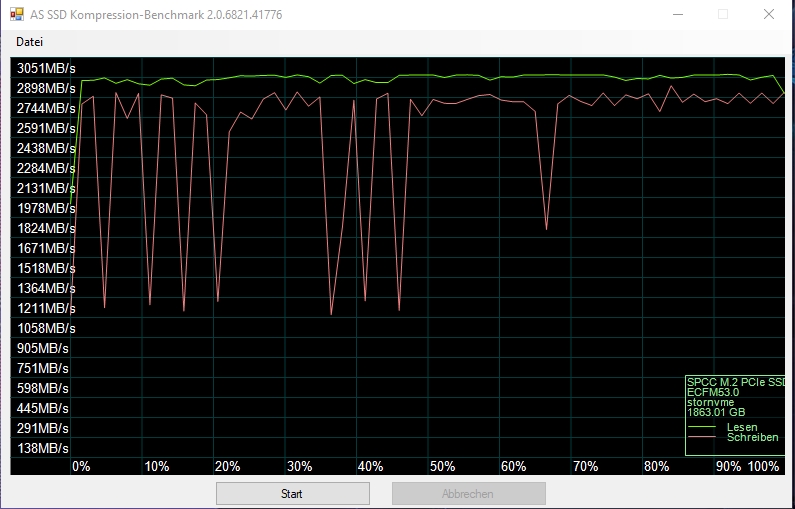 When working with compressible data, the speed is also at a high level, both during reading and write operations. 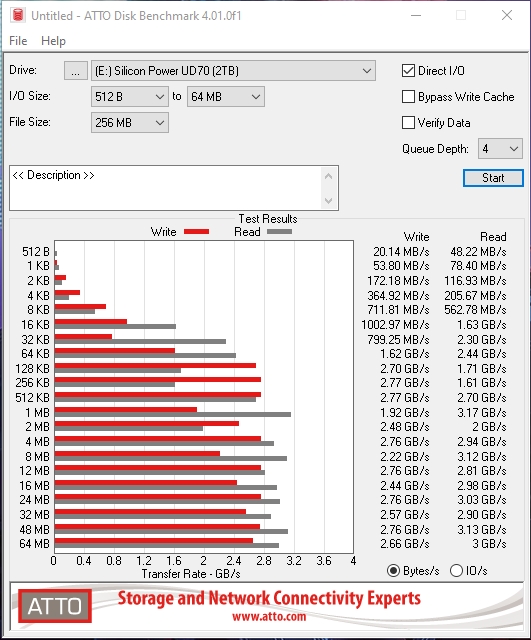 The dependence of the read and write speed on the size of data blocks is clearly shown by the diagrams from the ATTO Disk Benchmark version 4.01.0f1. The drive copes well with small-block operations, reaching a high level of performance, starting from 8 KB and reaching maximum speed with data blocks of 64 KB and above. 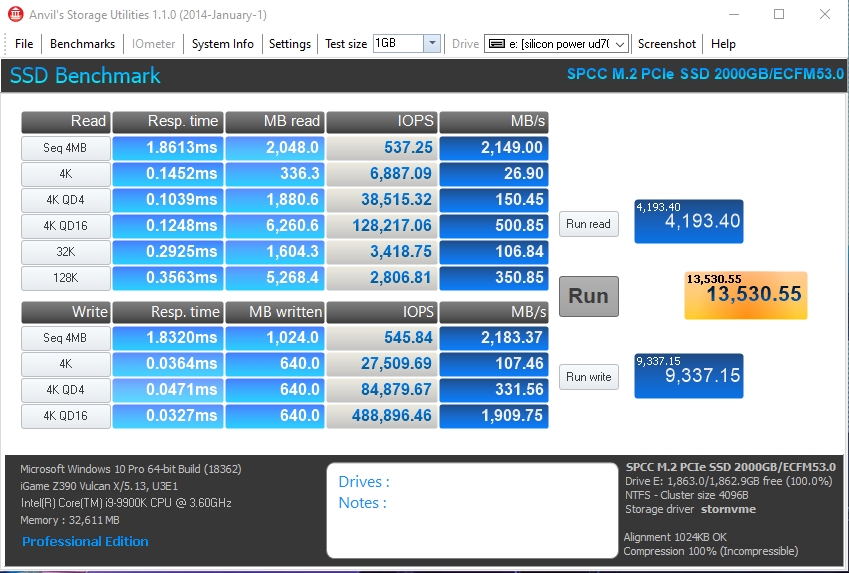 Anvil’s Storage reduces performance a bit in sequential operations. In the Anvil’s Storage Utilities test, the reading speed is 2149MB/s, while the writing speed can reach 2183MB/s; which is basically lower than the official maximum performance. 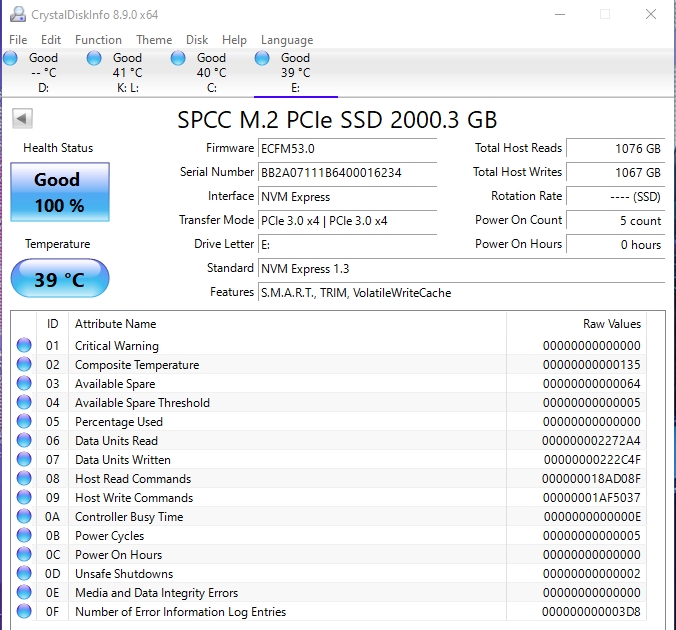 The tested Silicon Power UD70 2TB solid-state drive ran on firmware version ECFM53.0. The diagnostic SMART table, read by public utilities, such as CrystalDiskInfo version 8.9.0, reflects 15 standard parameters of the device state, including the readings of the temperature sensor built into the controller. Preparing an SSD for work is no different from similar devices. Before using it, it is advisable to mark and format it into the desired file system. The amount of user data available after that is approximately 1863 GB.

The absence of a heatsink affects the rather fast heating of the drive components during high-speed read and write operations. In a quiet state, the temperature of the SPCC UD70 1 TB, according to the temperature sensor built into the controller, was at ~ 45-50 ° C, quickly reaching ~ 68 ° C during tests. 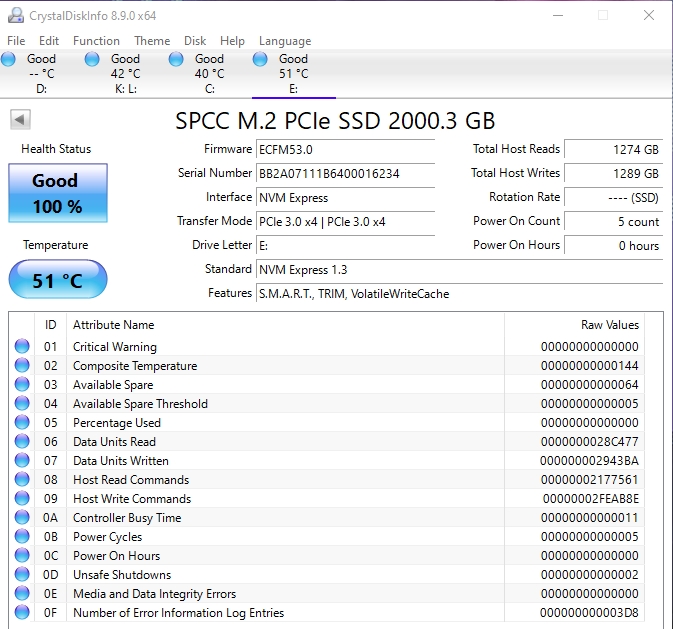 However, most modern motherboards are equipped with standard cooling plates for NVMe solid-state drives. When installed in the top M.2 slot on a Colorful iGame Z390 Vulcan X V20 motherboard with an extended heatsink, the Silicon Power UD70 2TB temperature did not exceed 59 ° C even under prolonged stress in stress tests. This is already a good result for a fast SSD. 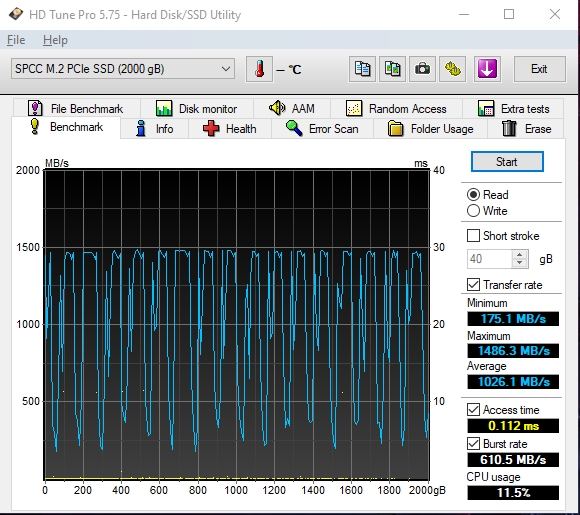 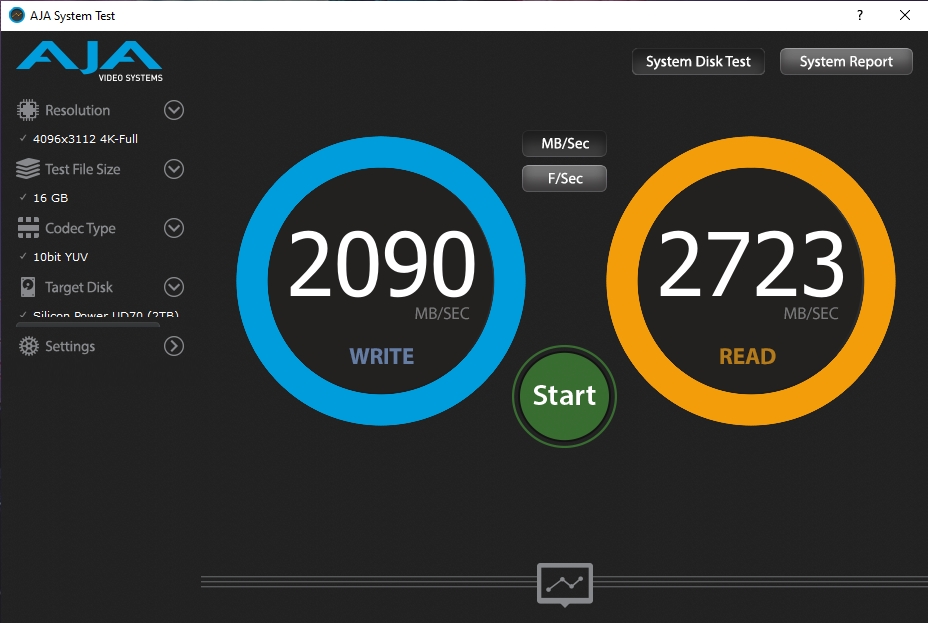 The speed characteristics of Silicon Power UD70 2TB more than meet the requirements of systems working; with high definition video. The AJA System Test confirms its readiness to work with 4K video streams. The only limitation in this use case will be the storage capacity of 2 TB; which is not enough for video editing. 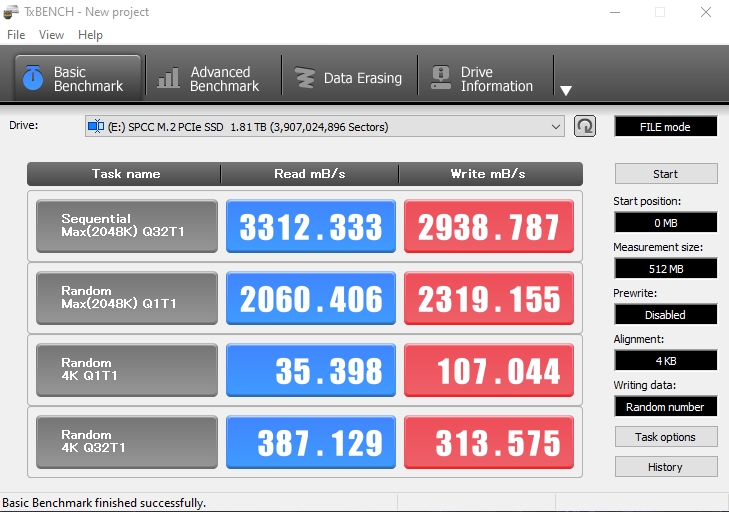 Silicon Power with the UD70 series offers a low-cost storage product, being made up of QLC 3D NAND chips storing 4 bits per cell. As a result, we find 1TB and 2TB proposals at a really surprising price. The Silicon Power UD70 2TB NVMe SSD reaches speeds of 3400 MB / s in reading and 3000 MB / s in writing; it really is fast enough even as competitive as other drives from other brands that have a much higher price.

Performance in tests has been satisfactory indeed. Micron’s 96-layer QLC 3D NAND chips are competitive in terms of speed compared to TLC chips. Now, when dealing with this type of QLC 3D NAND memory we have to be very aware of the resistance or useful life of the unit in TBW (Terabytes Written) terms. LDPC ECC technology, end-to-end data protection (E2E) are welcome.  The manufacturer offers a 5-year warranty and a TBW capacity of 530 for this type of flash memory (QLC) are very acceptable.

The MSRP price for this 2TB presentation is $189.99. QLC flash memory-based drives have no competition in terms of price performance; so this presentation is priced at $0.09 cents per gig. Unmatched for MLC and TLC flash drives. When comparing with other brands such as Samsung, Corsair; Western Digital the price difference can be 60% or more even up to double. But it must be made clear that the resistance in Written Terabytes is much higher (TBW) offered by these other brands.

From that point of view and to close, the Silicon Power UD70 2TB NVMe SSD is a storage unit aimed at home and office; for gamers due to its high loading speed. Light and moderate work. Not intended for the data center. File search and write work continuously, servers connected to workstations; not to configure virtual machines where continuous work as a data center is a constant. Continuous writing would quickly end the life of this type of flash memory.