TeamGroup is a well-known Taiwanese flash memory and storage manufacturer that has long served the needs of users around the world. Today we review the T-Force Vulcan G (512GB) SSD, which is aimed at the entry-level segment and upgraders that replace their old mechanical hard drives. We previously reviewed TeamGroup’s CX2 SSD, which offered a solid performance at affordable prices. The new TeamGroup Vulcan G is an even more affordable drive, fetching prices previously unthinkable for SSDs, but compromises had to be made.

The Vulcan G is built around a Silicon Motion SM2258XT G controller, associated with TLC 3D flash chips from Toshiba, no DRAM chip is installed. The Team Group Vulcan G is available in capacities of 512GB ($ 50) or 1TB ($ 80). Endurance for these models is set at 400 TBW and 800 TBW respectively. Team Group includes a three-year warranty.

This TeamGroup T-Force Vulcan G SSD boasts a beautiful presentation to conquer us not only for price and performance but also for appearance, demonstrating the brand’s clear gaming orientation. For this, a flexible cardboard box with a size adjusted to the unit has been used and decorated in detail with photos of the unit and information on the back. 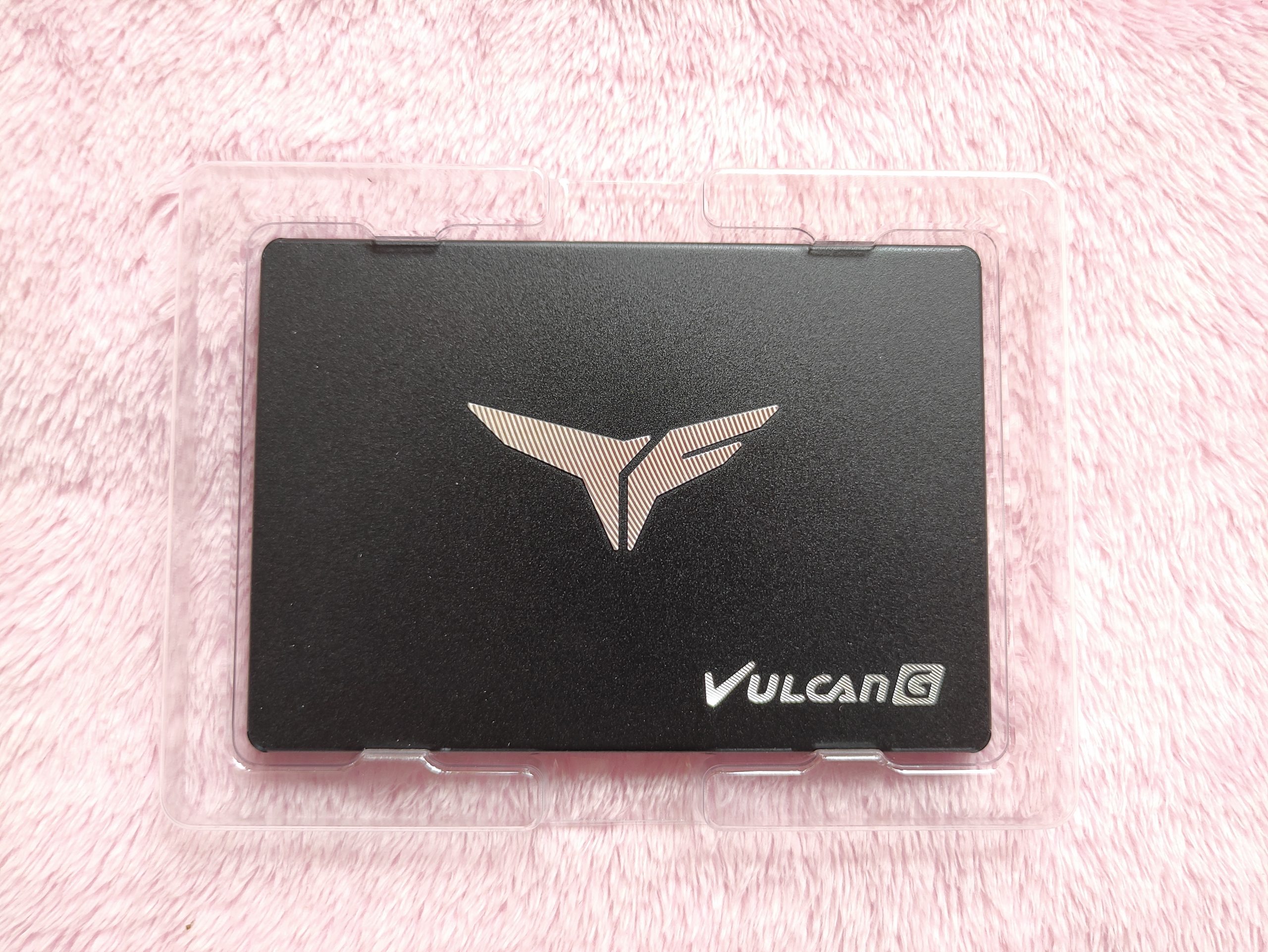 Inside, we have a semi-rigid plastic blister that is responsible for improving the protection of the unit for transport. In addition to the SSD, we only find a sticker with the manufacturer’s logo to decorate our chassis, if we want. 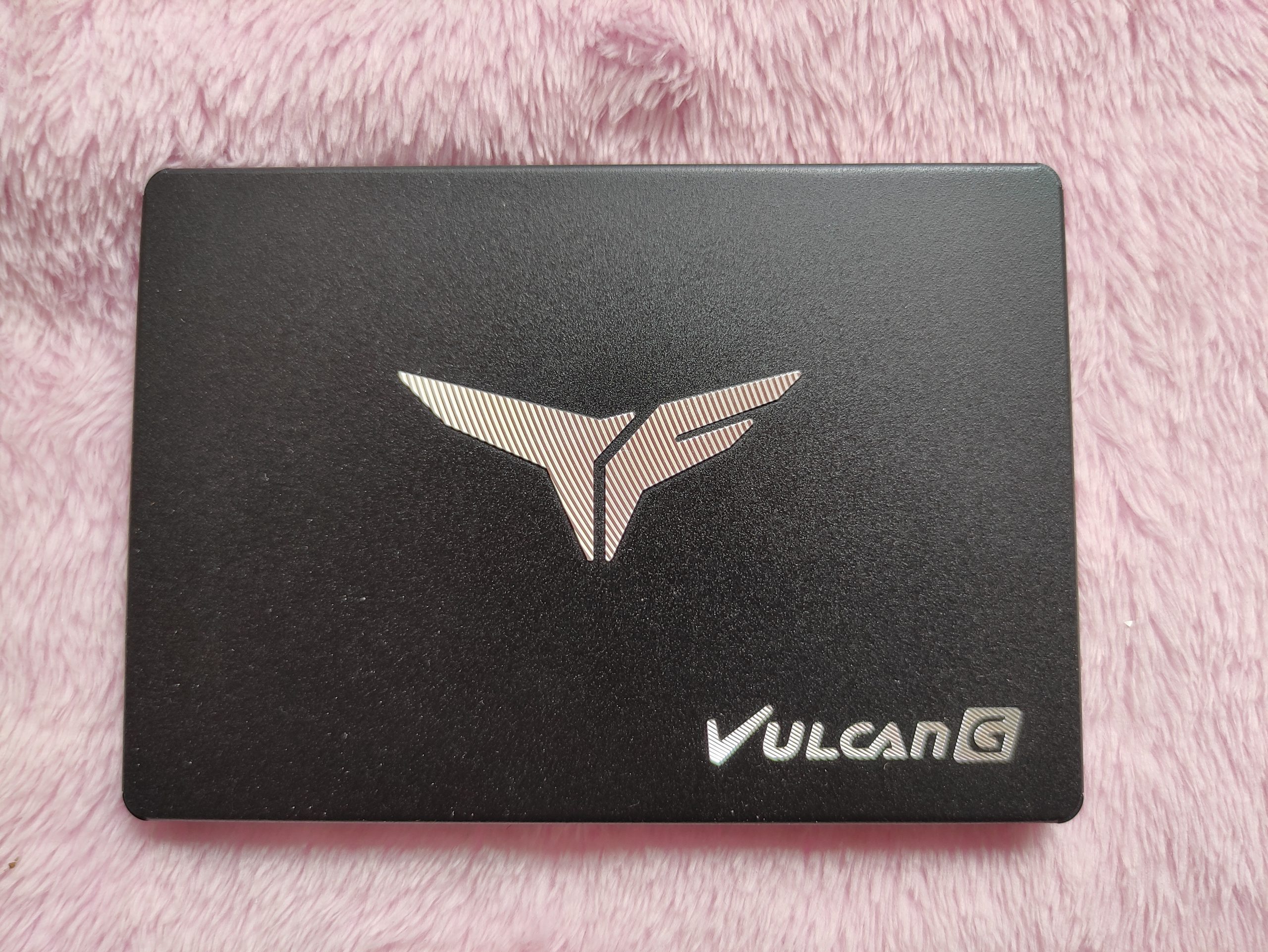 There will be many manufacturers with which this Team Group T-Force Vulcan SSD competes since most of them have already updated their SATA SSDs such as the ADATA SU750, which also uses the identical Silicon Motion controller. In this way, we can classify this unit as medium / high range for its benefits, which we will see later. For now, let’s focus on the exterior and encapsulated appearance because there is no waste either. Of course, a 2.5 ”format typical of a SATA drive has been used with measurements that especially stand out in thickness, with only 7 mm to adapt to any small desktop chassis or notebooks with the same capacity. 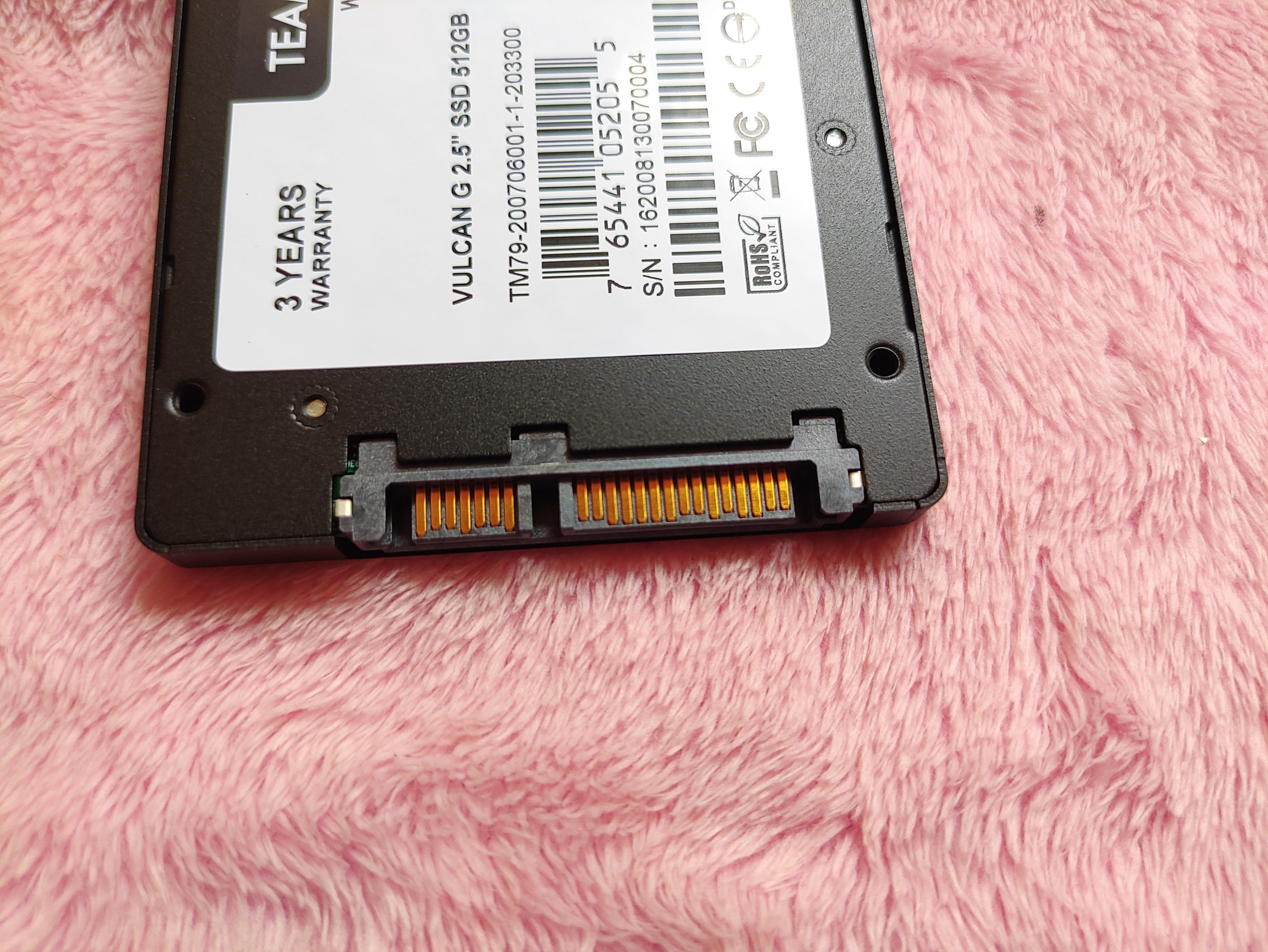 The T-Force Vulcan G SSD is using a package completely made of aluminum and composed of two parts, which will be joined together by screws located on the side. This gives us a good opportunity to open it (when the warranty has passed) to apply a thermal pad with better performance. In any case, what stands out about this is its design, with edges and central logo in a very nice polished finish, while the rest of the area is finished in black paint with a slight roughness that improves grip and the final appearance. 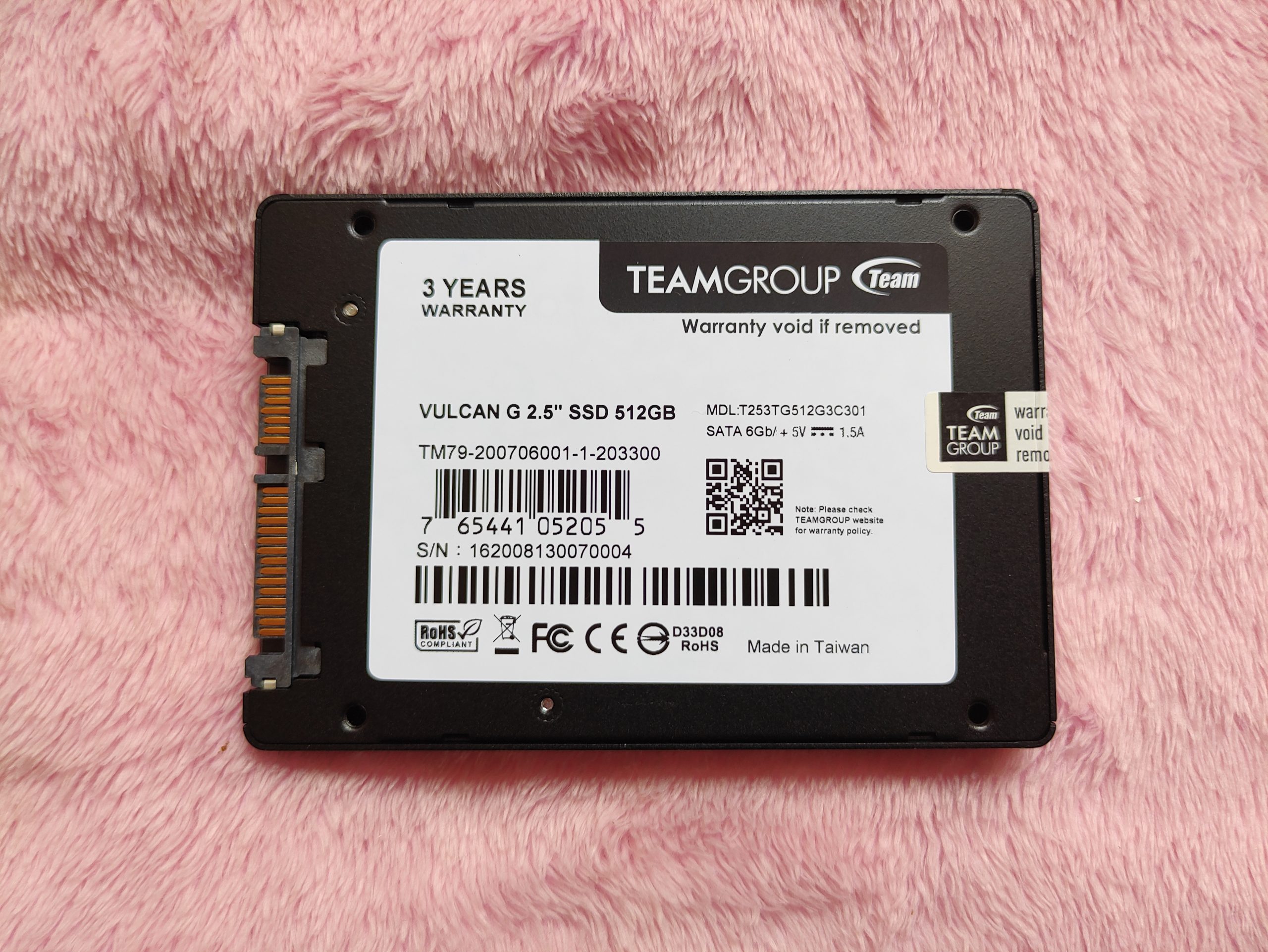 The characteristics of this encapsulation will ensure a shock resistance of 1500G as usual, up to 20G in vibrations while not working and an operating range in temperatures from 0 o C to 70 o C. We have made an opening to see how the isolation of the electronics of the T-Force Vulcan G SSD has been carried out. The small PCB will occupy more or less 50% of the total available surface, and the manufacturer has used a kind of adhesive in the form of a sticker to put the chips and the case in contact. Possibly a solution with a silicone thermal pad would have been more effective, although a SATA drive does not anticipate temperature problems. 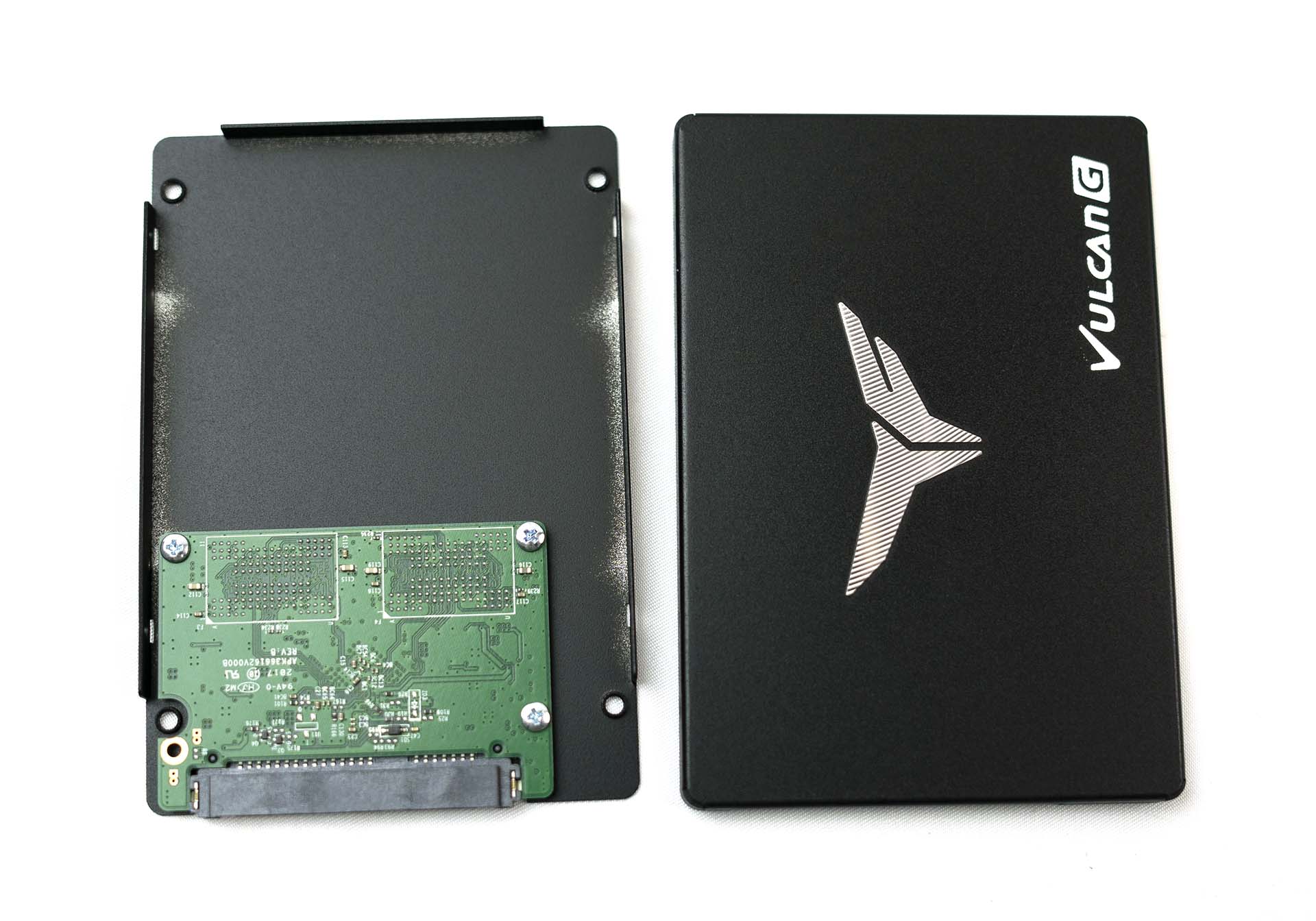 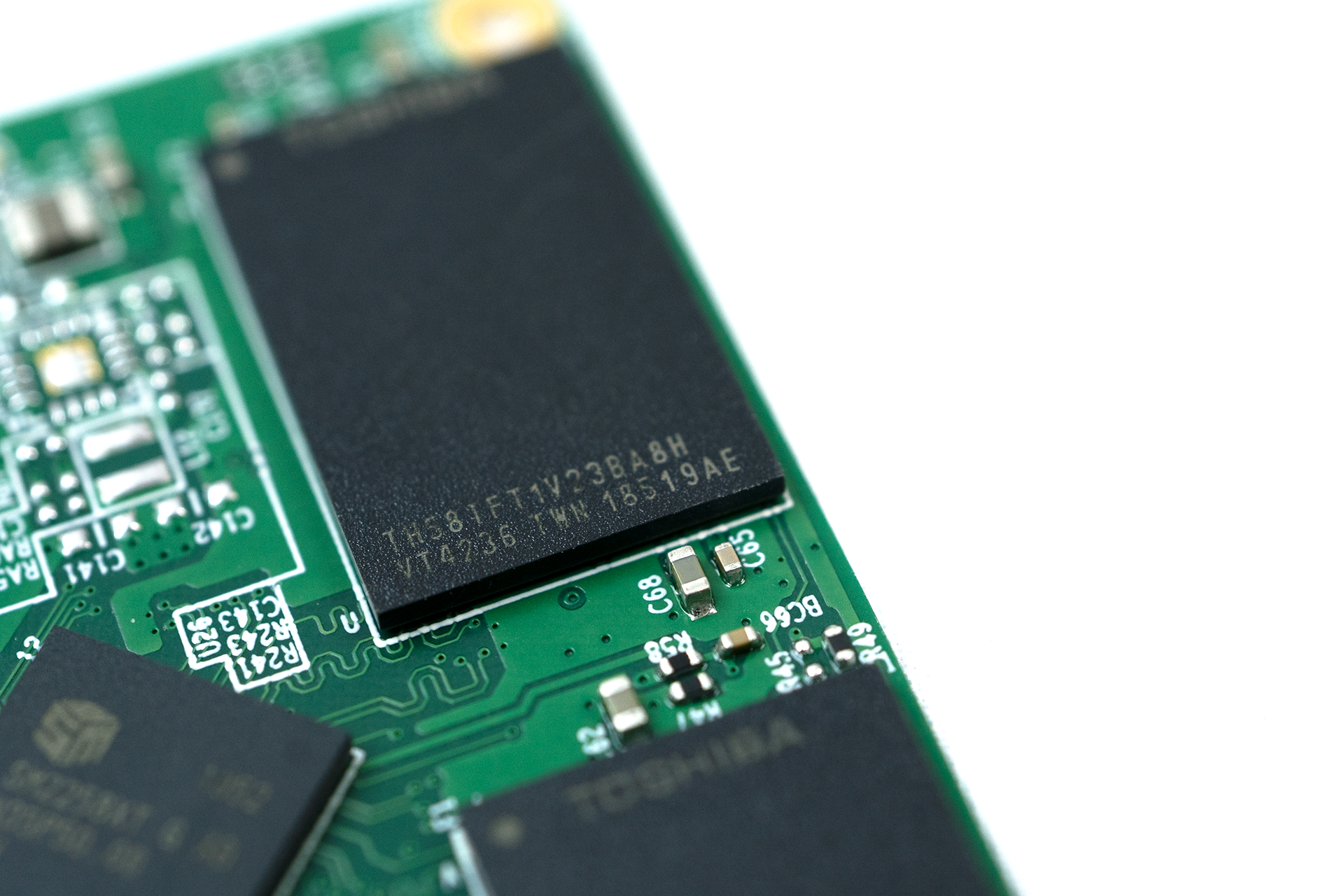 They are very good performance memories for this interface, and with its high density of 512 GB per chip; it would be possible to create units of up to 2 TB on this same PCB. Only MLC-type memories have been lacking to consider it high-end or very high-end, but it is not a bad option at all if you want to adjust prices. 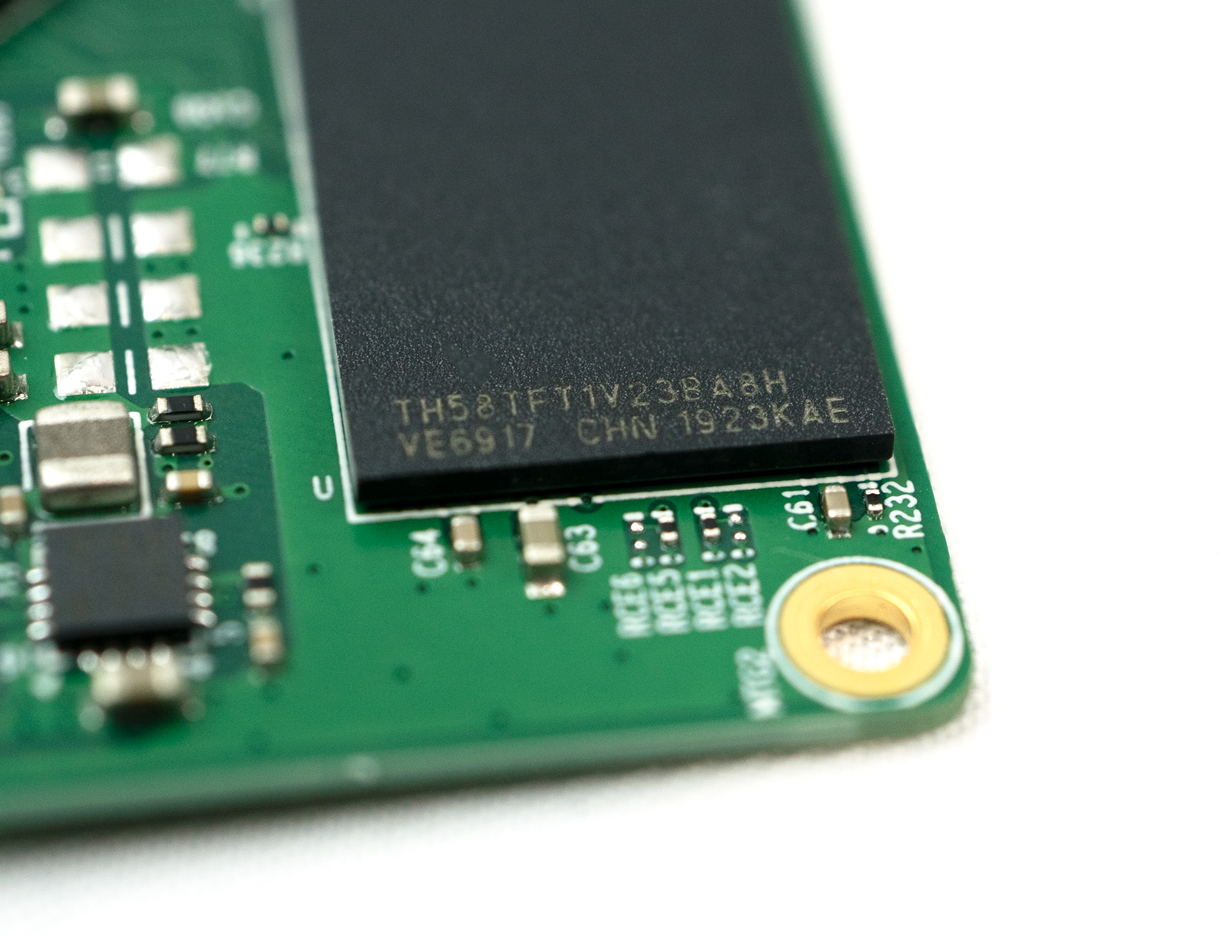 The T-Force Vulcan G SSD uses Toshiba memory modules on the PCB. To be specific, the memory modules are the Toshiba TH58TFT1V23BA8H modules. Each chip on the PCB for the Vulcan G SSD is 256 GB of storage. I searched everywhere and could not find the product sheet for this specific memory module. However, I did find a Toshiba part number decoder that breaks down what the numbers on the modules mean. If you have any interest in these modules, check out the Toshiba part number decoder. 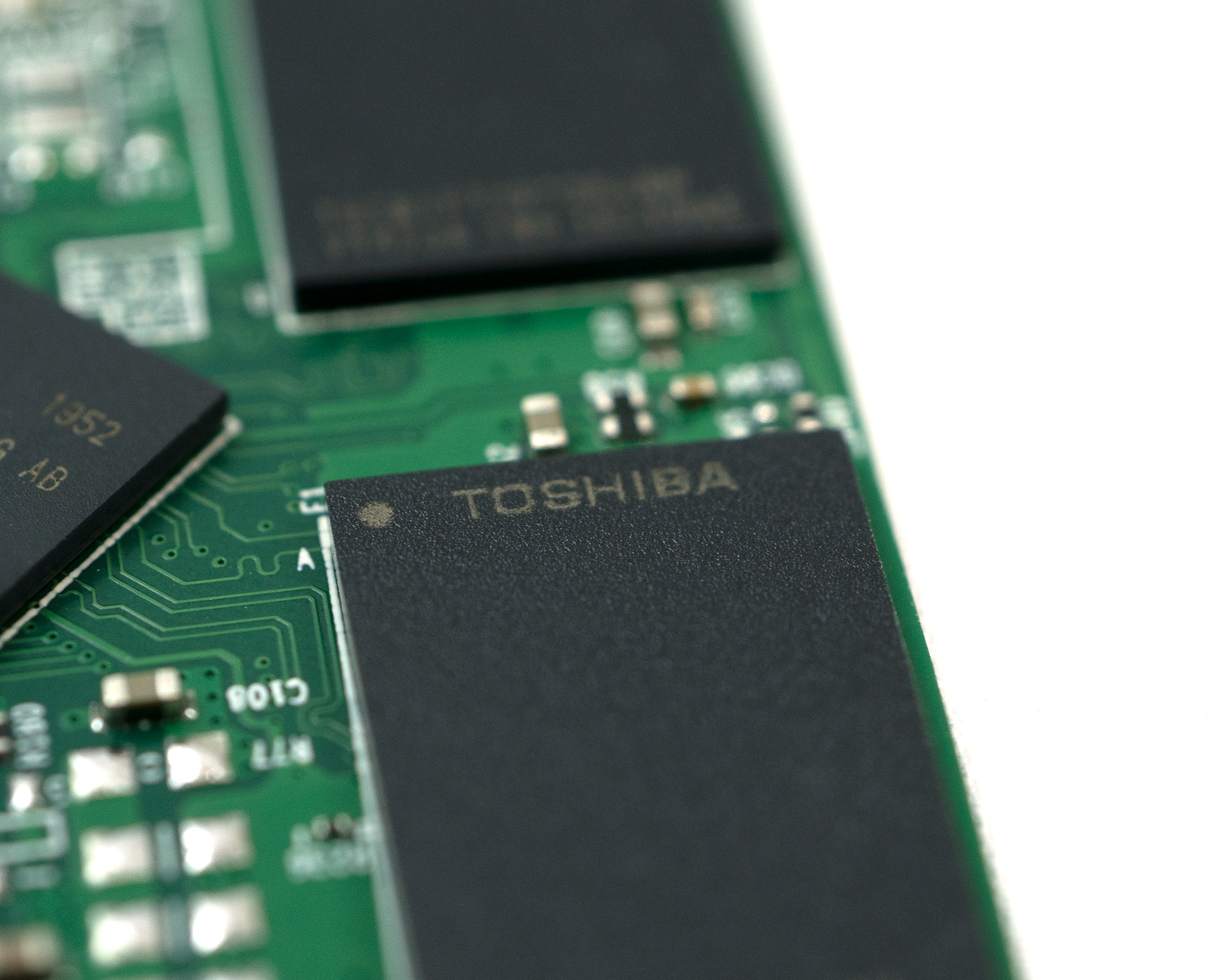 In this case, 512 GB, and 1TB versions are available, and all of them equip the Silicon Motion SM2258XT controller, a well-known element used by many other SATA SSDs for its good performance and low cost. This element is accompanied by a double Micron DDR3 pseudo-SLC DRAM cache chip that will allow you to improve the transfer of large amounts of data. This comes in handy for use in games since not using part of the RAM for cache will increase IOPS in random processes and decrease latency.

Now it is our turn to make our list of tests to the unit TeamGroup T-Force Vulcan G SSD in its version of 512GB. For this we are using the following test Setup:

The tests to which we have subjected this SSD are the following: 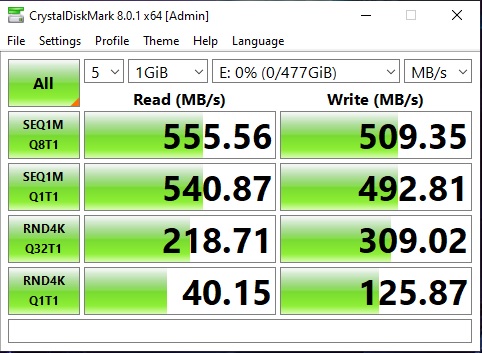 As usual, Crystal Disk Mark is the software that gives us the best sequential reading and writing results; exceeding what is set by the manufacturer with more than 555.56 MB / s and 509.35 MB / s. We also see quite good rates in random operations; slightly exceeding the units mentioned before in the last section of Q1T1.

In this benchmark, you can see that the Vulcan G offers sequential read speeds of up to 523 MB / s and up to 482 MB for write speeds, In the AS SSD test, we got results almost identical to the T-Force CX2. AS SSD Benchmark is a simple and portable utility that helps you measure the effectiveness and performance of any solid-state (SSD) drives connected to your system. It will test “Seq”, “4K”, “4K-64Thrd” and Access Time. In the end, it will give your SSD a score. 4K tests the read/write abilities by access random 4K blocks while the Sequential test measures how fast the drive can read a 1GB file. For AS SSD, we ran the SSD Benchmark, the Copy Benchmark, and the Endurance Benchmark. 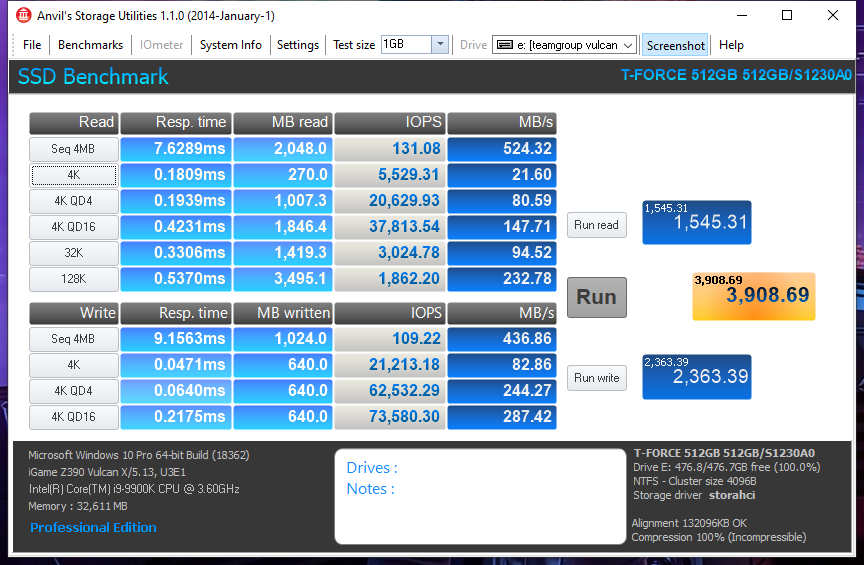 Anvil’s Storage reduces performance a bit in sequential operations. In the Anvil’s Storage Utilities test, the reading speed is 524.32.50MB/s, while the writing speed can reach 436.86MB/s, which is basically close to the official maximum performance. The access and write times are quite similar to the Kingston KC600; while they beat the ADATA SU750 without much trouble, so the cache is working quite well. 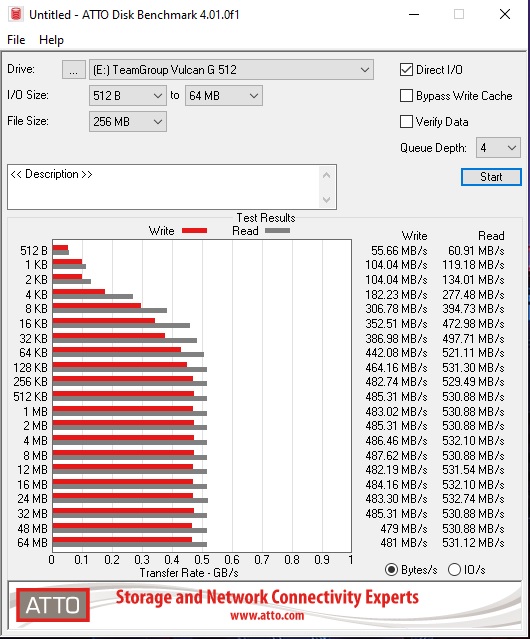 On the part of ATTO Disk, we have the best performance figures from blocks with 512B in size onwards; reaching figures of 487.62 MB / s in writing and 532.74 MB / s in reading, also very close to those measured in Crystal Disk Mark. For the rest, we see very similar figures in the case of AS SSD with respect to the other programs, demonstrating a great solidity and performance in this unit. 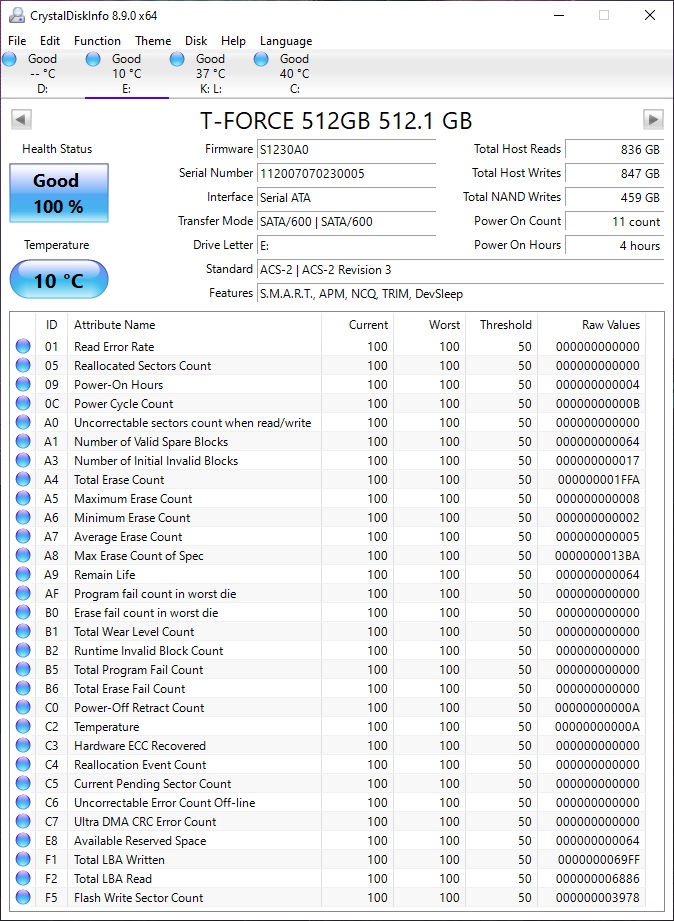 Through CrystalDiskInfo, you can check the firmware number, serial number, interface protocol, support functions, etc. of the Vulcan G. The standby temperature is 10 degrees and the hard disk health status is 100%. It can also be seen that TeamGroup is in quality control. Very well done. 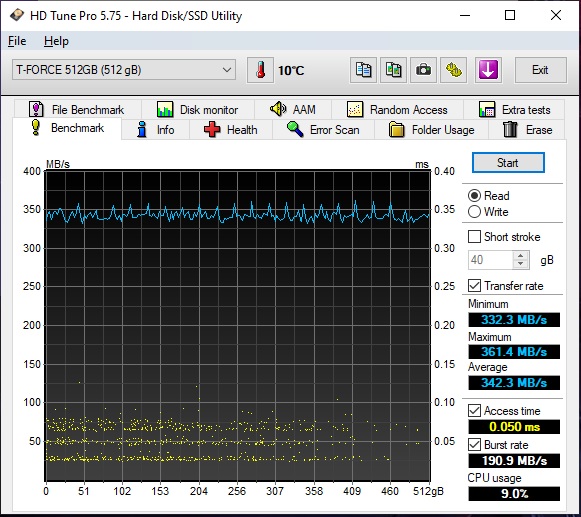 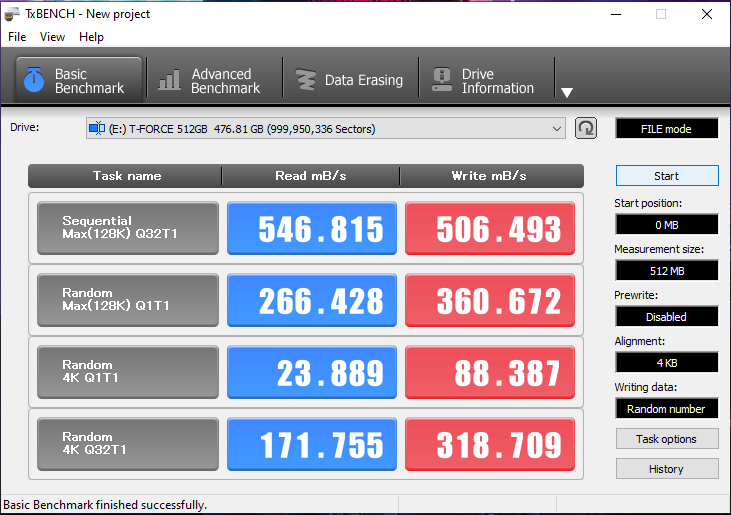 If we are looking for a good performance drive, with a sleek design and large capacity, this T-Force Vulcan G 512GB drive is perfect. It offers us a performance within what is expected for a SATA III drive, at the same time that it has a fairly adjusted price. It lacks cosmetic elements such as RGB, which only makes the price of the unit more expensive.

Under the hood, the TeamGroup Vulcan G uses a Silicon Motion SM2258XT controller paired with an older 64-layer 3D TLC from Toshiba. It’s nice to see TLC instead of QLC used on a budget drive. For cost savings, a DRAM cache chip isn’t installed. DRAM on an SSD is used as fast temporary storage for the drive’s internal mapping tables; which translate between physical disk addresses (the OS sees these) and the actual location of where the data is stored in the flash chips: “which chip, at which location”. Using DRAM has a speed advantage as it operates much faster than flash, but it’s a cost/performance trade-off. The TeamGroup T-Force Vulcan G 512GB drive is intended for gaming enthusiasts and those who want to upgrade their laptops. It has an elegant design with metallic finishes that attract a lot of attention.